Lunch at Eleven Madison Park was my last and final restaurant for Restaurant Week on Monday. (For those of you who are still curious when is it over, it’s officially this Friday, July 27, 2007; while some restaurants are extending ’til Labor Day.) EMP’s interior once you enter…

I had high hopes for EMP, since I had a really great experience last time when I tried Chef Humm’s Gourmand Menu that courted me to be one of the many fans of this place (if you do a search at Chowhound, you know what I mean or read Frank Bruni of the NY Times’ piece). To end Restaurant Week with a good bang of sorts, I ended up with a larger group of friends: Robyn, Helen, Doug, and Ariel.

I know some of you are wondering, why is Ariel going out with me to three our of the four restaurants during RW that’s because he’s a foodie, yet he’s not as insane as I am to go to the phones and make the darn reservations…or he’s just plain lazy and hate the idea of eating alone.

Moving on…most of us were early or on time, with the exception of Ariel since he’s stuck at work at the Financial District and showed up half an hour late. What we did was order for him, well actually I ordered for him since no one really know his tastes that well that I had the honors of doing so.

While we were waiting for our food, Doug wanted black tea and we were all served bread and butter. Robyn and I also killed time by taking photos of the interior (you’ll see hers when you go to her Flickr photostream or when she writes her post). Olive Roll/mini baguette (Robyn and I had this) Robyn was a bit intrigued with the small dish of sea salt and coarse ground black pepper. We were all were fascinated how pretty and elegant EMP’s silver butter dish and the teaware were and how the sugar bowl’s arranged. The scary thought and comment from Helen was that the entire sugar bowl would make her happy for ONE cup of tea. Oh jeez, I think my skin crawled at that thought…

A reflection of us… Interior shot near our table

All three of us were served appetizers first since we notified the waiter that Ariel will be running late. Doug’s salad of green vegetables with Marcona almonds looks so…pretty. I don’t know if the salad have any almonds but from what I can see are fresh peas, Cannellini beans, and leafy vegetables. He says it’s good but I have no idea how it taste like since I didn’t try it. Robyn had the Big Eye Tuna with pistachio oil and asparagus. It looks so tiny. The chunks of raw tuna centered in a large white plate, drizzled with pistachio oil and asparagus tips that were cut into quarters. The asparagus part was pointed out by Robyn when she was eating this dish. That cracked me up because it’s so incredulous that the chefs are either trying to show their great knife skills or they’re so stingy with the food that they’re serving small portions to the diners of the Restaurant Week menu. Helen and I (eventually Ariel as well) had the strawberry gazpacho with poached tiger prawns and guanciale. I thought it was creative for the chef to think of putting strawberries in a spicy, savory tomato based soup. It initially tastes like smoky, roasted peppers and tomatoes and the end note is the sweetness of the strawberries. The crunchy bits of guanciale (think Spanish form of bacon) didn’t really contribute much in terms of flavor but it’s a nice textural contrast to the soup. The tiger prawns gave it a meaty touch to the soup. I can’t really see why there are prawns in the soup – the sweetness of the prawns don’t really match the strawberries or contrast the smokiness of the gazpacho.

Doug describes this soup as something from Jamba Juice. When Ariel ate this his thoughts were along the lines of that it’s “too clever by half, that it was so dainty that is somewhat lost its essence of gazpachoness.” To elaborate on what Ariel’s comment, that’s the chef gets points for being so creative but it’s not the real gazpacho that one would really want. I concur with Ariel since the one from the Modern he had the past Friday was way better (if you want to read that part again, click here). Robyn and I had the roasted chicken. It was pretty darn delicious. It’s juicy, succulent, and it’s cooked perfectly. The morels’ and peas’ flavors didn’t really work too well with the chicken. I do like the fact that the peas and morels were fresh but they don’t compliment the chicken to well, in my opinion. When Ariel saw this dish, he started to act like a three year old asking, “It’s made of tomato? Why isn’t it white?” Gah, the things I deal with him… (To answer his question, there is such a thing as white tomatoes. Google it.) Anyways, from what I tasted from Helen’s salmon (she, Ariel, and Doug had this dish) the salmon was cooked perfectly. It’s flavorful, silky with a crunchy salty crust, and the white tomato foam was pretty interesting. How did the foam taste? Well, it tastes like an essence of mild, sweet tomatoes. Under all that foam is bits of tomatoes and other vegetables that I can’t distinguish due to the fact that it’s blended.

The crazy thing that Ariel did after he ate his salmon and had a large pool of tomato foam remaining was that he asked for another roll and tore it into bits, and then ate it like croutons in a bowl of white tomato soup. I think he’s either really hungry or he’s ingenious. I’m thinking the former.

For sure, the entrées were better the appetizers. Another shot of the panacotta As you can tell, I’m pretty much taken by the aesthetics of this panacotta that Robyn had (Doug and Helen had this too). When I tasted it, I didn’t detect any almond flavor or vanilla, even though you can see a ton of vanilla bean specks. The berry sauce that’s sitting under that panacotta was minty. It’s refreshing but odd to me. Ariel’s moelleux of bittersweet chocolate had a strong, heavy scent of passion fruit that Robyn could smell it from where she’s sitting. The passion fruit flavor wasn’t as strong as it smells and the chocolate cake was decent. Helen and I had our own apricot clafouti with almond honey ice cream. The clafouti wasn’t creamy enough but it had a nice apricot flavor with chunks of apricot within it. The ice cream was creamier than the Modern’s but the almond flavor tasted a bit funny to me. It tasted like they added the almonds in raw form instead of roasting the nuts and I believe they used some almond extract. Why? Just because I tasted something a bit alcoholic as an end note to this ice cream besides the floral note of the honey. Hmmm…that gets me thinking.

At the end of our meal, we all discussed openly what we thought of the food we ate. Basically we gave an oral food review. Then Robyn and I just started taking portraits of everyone eating with us, also Helen joined in by using our cameras for a few moments by taking candid photos (you’ll see a few on Robyn’s post or Flickr). The boys are talkin’ As for the photo above, much props go to Robyn for helping out on editing this photo. Thank you, Robyn! I LOVE you! Anyways, as I’m looking at this photo, I’m getting all mushy now since I miss everyone.

My overall thoughts on EMP during Restaurant Week, the food was decent (the main courses fared the best of the three). It’s not as good as my other experiences with this place. Service as always attentive, but they were a bit more on their toes initially because of the fact that when a restaurant have a large group of diners, and two of them happen to have SLR cameras on hand, they should be. I just hope Eleven Madison Park would prove me wrong from this meal was just a bad blip just because it was Restaurant Week. I’ll see in the future. 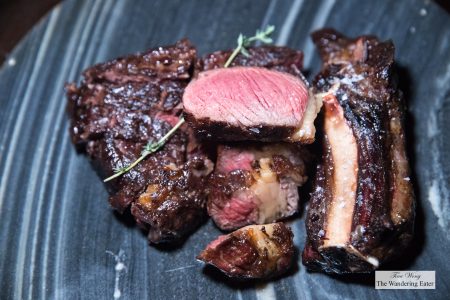