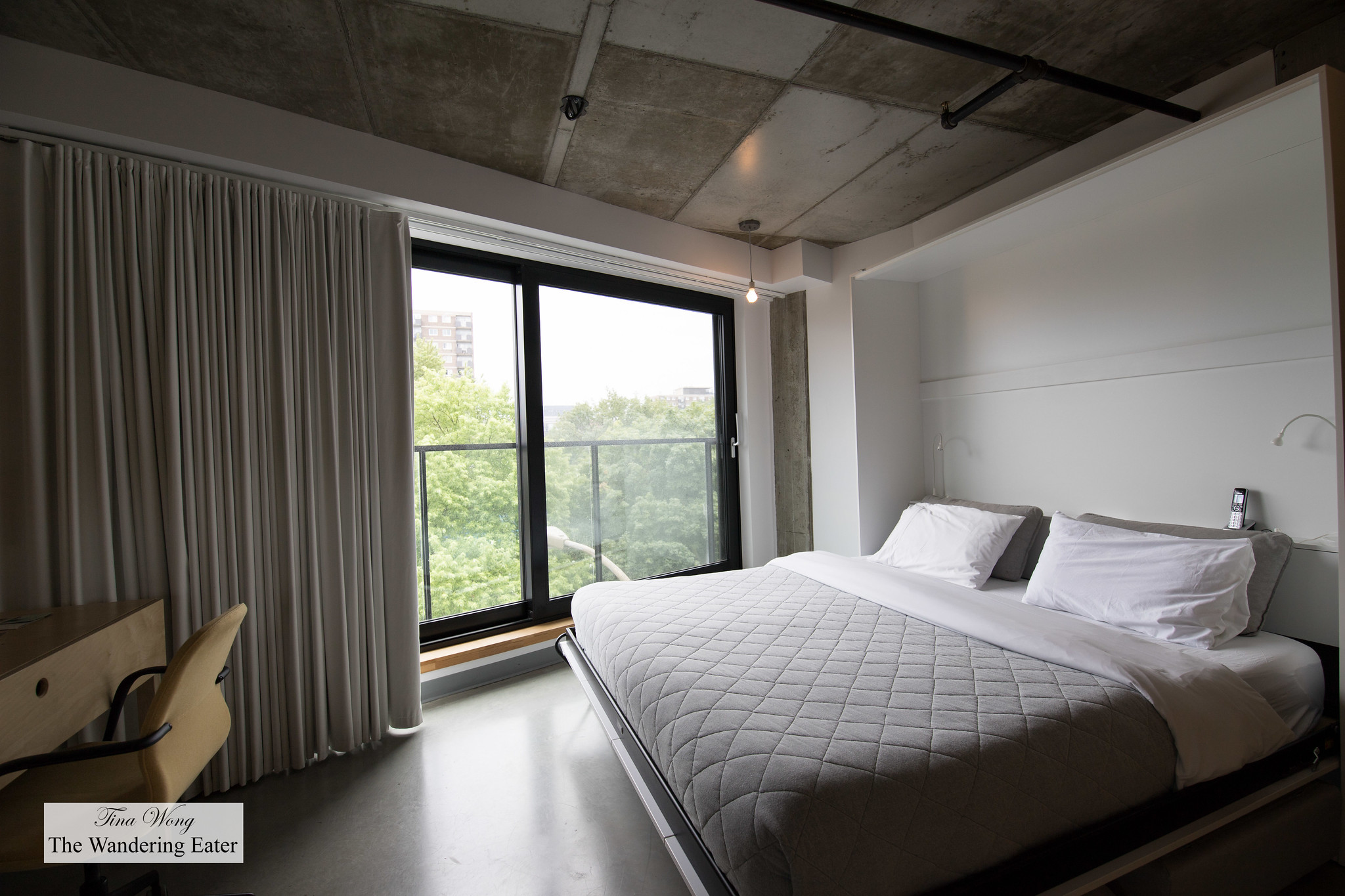 I was invited to a press trip to Montreal last week to explore this charming city that has both the Old World and modern. It has been about five years since I’ve been to this city and even though it’s generally familiar in terms of where are the popular neighborhoods are but life always moves on and certain trends pick up or went away since I last visited. I will write a general overview post of this trip soon but I’ll start with the individual places I’ve stayed and eaten.

During my time at Montreal, I have stayed at a cool boutique hotel called Boxotel. It has a mix the coziness of homestays (or AirBnbs that taken over the city), the services of a hotel and the downtown feel of loft living. The result, open since last winter, is something new for Montreal: Twenty high-ceilinged, clean-lined rooms equipped like small apartments, complete with top-end appliances (even its own laundry washer and dryer), tableware and cutlery. Abstract photomontages of Montreal street life adorn the whitewashed walls. A sleek aesthetic extends through Boxotel’s poured-concrete lobby.

My Queen Studio felt like a chic Montreal pied-à-terre. Meticulously fitted cabinetry hid sleek washer/dryer, dishwasher and large refrigerator units from upscale German brand Blomberg. The nooks held helpful basics like detergent and dish washing liquid. The Montreal potter Benoit Daigle supplied the moss-green tableware branded with Boxotel’s logo. Scandinavian-inspired furniture, including a desk and love seat, added pops of color. Working in the room was challenging; the small LED desk lamp was weak, and just two outlets faced the desk. My queen bed was firm, and crisp sheets made falling asleep easy and my room was quiet at night even though it faces Ontario Street.

My spacious bathroom was separate from the bedroom/living space. It’s paneled with gray-brown tiles, a decent sized sink that has a bottle filled with face oil cleanser and lotion. A simple button operates the enormous rain shower head or the handheld shower head. A backlit makeup mirror suspended above the compact sink adds a thoughtful touch.

On Boxotel’s sixth floor, a tiny gym and sauna open to a sprawling outdoor terrace with panoramic downtown views and there’s a hot tub in one corner and a barbecue grill you may use as an alternative to your kitchen.

As part of my hotel stay, breakfast was included. Capsa restaurant is found on the sublevel or basement of this hotel. The owner-Executive Chef Danny St Pierre helms the restaurant and was cooking breakfast the morning I was eating there.

What was part of the hotel breakfast is a beverage of coffee, tea or juice and a choice of croque monsieur, chia seed pudding with house made granola, and another dish. I tend to think hotel breakfasts, except hotels in Asian cities, tend to be ok at best except at Capsa the fare is actually very tasty and satisfying.

The croque monsieur was good. Crisp, not too greasy grilled bread with just melted cheese with a good ratio of thinly sliced ham.

The chia pudding was the only vegan option but it’s actually better than the sandwich, in my opinion. The different flavors and textures with just the right amount of sweetness and acidity from the local Quebec strawberries and house made chutney. The chia pudding was soaked in coconut milk. The granola was made with oats, flax seeds, chia seeds; it’s nutty, crunchy and just sweet enough. The strawberries served two ways were the best part of this bowl balances the sweetness with gentle acidity.

A few other things I’ve tried that are on Capsa’s regular menu were the poutine balls or called Poutine inversée (inversed poutine) was unique and it is what it’s translated, an inverse poutine. Poutine is Montreal’s famous dish of fries topped with cheese curds and gravy but this is in bite sized ball form. It’s crispy, fried balls of mashed potato filled with gravy and cheese and it feels as satisfying.

If you do not care to have a beach bod, have an intense hangover, or you are filling up for a brutal cold winter’s day like one would encounter when you are in Montreal during that season, you should order the Francesinha. This monster plate of white bread (crusts trimmed) layered with chorizo, house made pork sausage, slices of steak, slices of pork tenderloin topped with gooey cheese and sunny side egg smothered in tomato gravy and a side of crisp baked potatoes. This concoction was delicious but it’s really decadent especially for summer but I have seen a man (a local) polished the whole plate for breakfast before I received my plate.