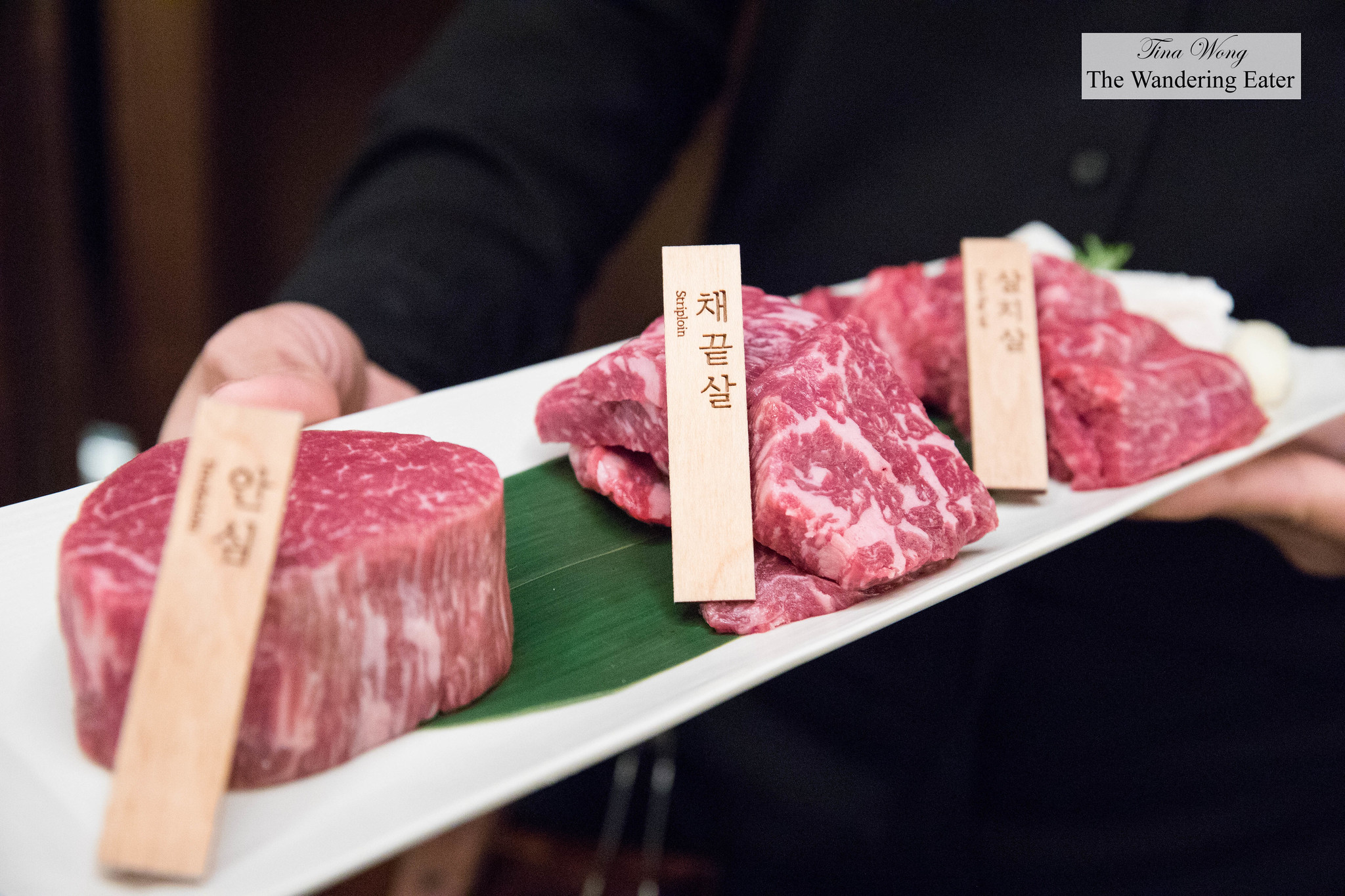 We started off with a large wooden box of Chadol-Jjim. It’s a dish of steamed thinly sliced beef brisket rolled with enoki mushroom, perilla leaf, set on a bed of bean sprouts. It’s a healthy, delicate dish but it tasted delicious from the beef and subtle umami flavors of the mushrooms and the hit of freshness from the perilla. It’s unexpected given the genre of Korean BBQ tends to serve hearty, big flavored dishes rather than delicate – and I like this change.

Moving onto the main show—grilling the cuts of Wagyu beef. The accompaniments to eat with the beef arrived shortly: assortment of flavored salts, Korean pickles like perilla leaf, parsnip leaf, and wild garlic leaf that are imported from South Korea, and a bowl of chopped raw cabbage and serrano peppers in light soy sauce.

The three cuts of beef we had were tenderloin, strip loin and chuck flap and they were grilled by our waiter. We enjoyed the high quality of beef and each cut was delicious in its own way. Of the three, I liked the tenderloin the most because it was the meatiest and it was the rarest cooked of the bunch (I like my beef cooked rare-medium-rare). The pickles were interesting and rarely seen anywhere in New York City and I really liked the cabbage-pepper-soy sauce since it delivered the flavors of bitter, salt, spice and crunchy freshness to the cooked beef.

If you needed another dish to really make this dinner luxurious and over the top, order the claypot cooked rice topped with uni (sea urchin) with strip loin but the chef opted to cook an uni and summer black truffle rice for us instead. This was an exquisite pot of rice since it had a lot of flavors and textures going on but nothing was really dominating over the other.

Overall, it’s a very good dinner that is upscale without the stuffiness and it’s a Korean BBQ that you won’t encounter very loud music or talking over a huge crowd of people. The food is very tasty and generally healthy even though it feels decadent at times.