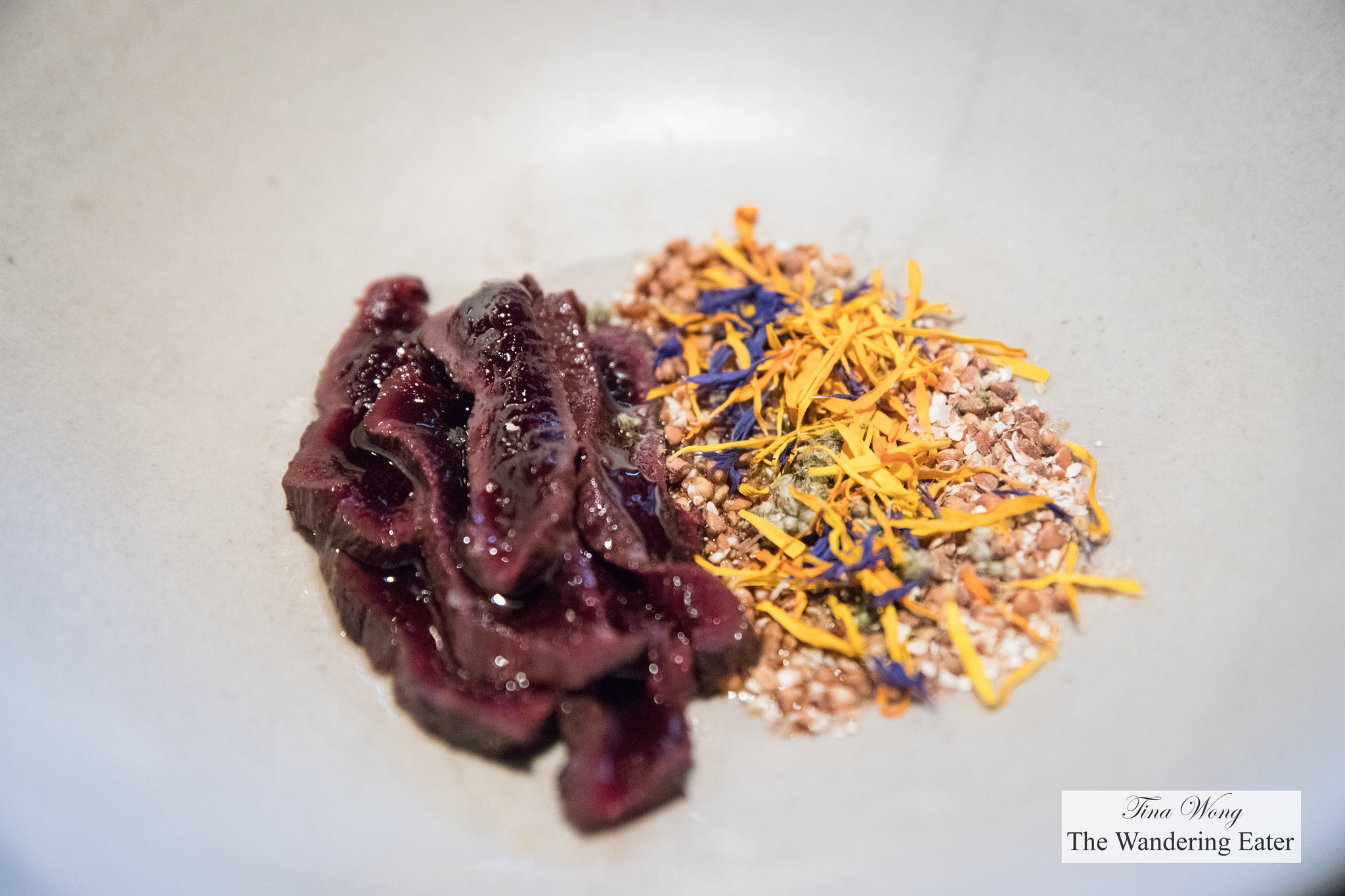 Restaurant Manitoba is a restaurant I’ve been meaning to go for a long time. I’ve first heard about this place when I was in Montreal four years ago. However, I didn’t have enough time to change plans and squeeze a stop by for a quick bite. Manitoba is located out in the industrial neighborhood of Mile-Ex (think of New York’s current equivalent of Bushwick, Brooklyn).

This restaurant is known for serving what can be described as cuisine cooked with Québec’s wild flora and fauna and inspired by Native American culinary traditions. This is a very original restaurant, from the food to the decor where both eating and drinking is well worth the visit. The current Executive Chef is Simon Mathys. The owners Elisabeth Cardin and Simon Cantin created a chic warehouse space complete with a bar up front and a large open kitchen in the dining room that has a dining bar for small groups or individuals to see the action up close. There’s a garage door in the back overlooking a square of greenery, a bar and tables are surrounded by wooden chairs.

This restaurant is ‘hipster’ if you want to categorize as such with the craft cocktails, the orange wine, the industrial design, the cool crowd — it all comes together so perfectly. It’s filled with a selection of private imports sure to seduce even the pickiest natural/biodynamic oenophile, the wine list is another plus.

I ordered the chef’s tasting menu and a glass of orange wine from Sylvaner that was fruit-forward but dry to work with many dishes for the evening. The amuse bouche sent out was smoked eel. It’s gently smoked and I liked the salinity.

The unusual thing for a tasting menu is to repeat a main ingredient twice in a row but I am presuming it’s to showcase the tomatoes’ versatility? The first course (seen above) were skinned baby heirloom tomatoes minimally dressed and really speaks to how incredibly ripened sweet and how it varies in acidity. The second course of tomatoes was interesting to have a “mortar crushed salad” topped with smoked beef fat and salt that it tasted really meaty like a steak even though you’re primarily eating produce with a touch of beef fat.

The next course of cooked Nordic shrimp wrapped in red lettuce leaves and topped with a sea beans pesto-like sauce was delicious. The sweetness of the small, perfectly cooked shrimp and the sea beans sauce added a gentle hit of brine.

The marinated and briefly seared seal meat, was flavored on the side with buckwheat, dried flower and labrador tea and drizzled with smoked butter and it’s the most unique dish I ever ate in a long time and seal meat isn’t something I would anticipate eating. The iron-rich meat was very good; highlighting its resilient texture more than strong flavor. The flavors were balanced out by the smoky butter and the nutty and floral flavors of the tea.

The final main course of the evening was smoked chicken supreme with roasted kohlrabi and jus. The chicken cooked beautifully that the skin was crisp and the breast meat was still juicy. The wedges of kohlrabi root were cooked through but it’s not the most unique or flavorful dish of the night after eating that seal dish.

For dessert, it was a splendid profiterole filled with rhubarb compote and diplomat cream. The rich diplomat cream added just enough decadence to this dessert but not overwhelm you and the entire meal since the rhubarb’s tartness did the trick. The final dessert, mignardes, was a petite sunflower cookie with a dab of sunflower seed praline. It’s a very toasty, nutty cookie that’s crisp and the praline enhanced the toasted nutty flavors as well as a pinch of extra sweetness.

It’s a great meal overall. Service was sharp yet exceedingly friendly. But besides that and the occasional quibble with the food, I’m happy to report Manitoba is a success under Mathys and would definitely come back when I return to Montreal.