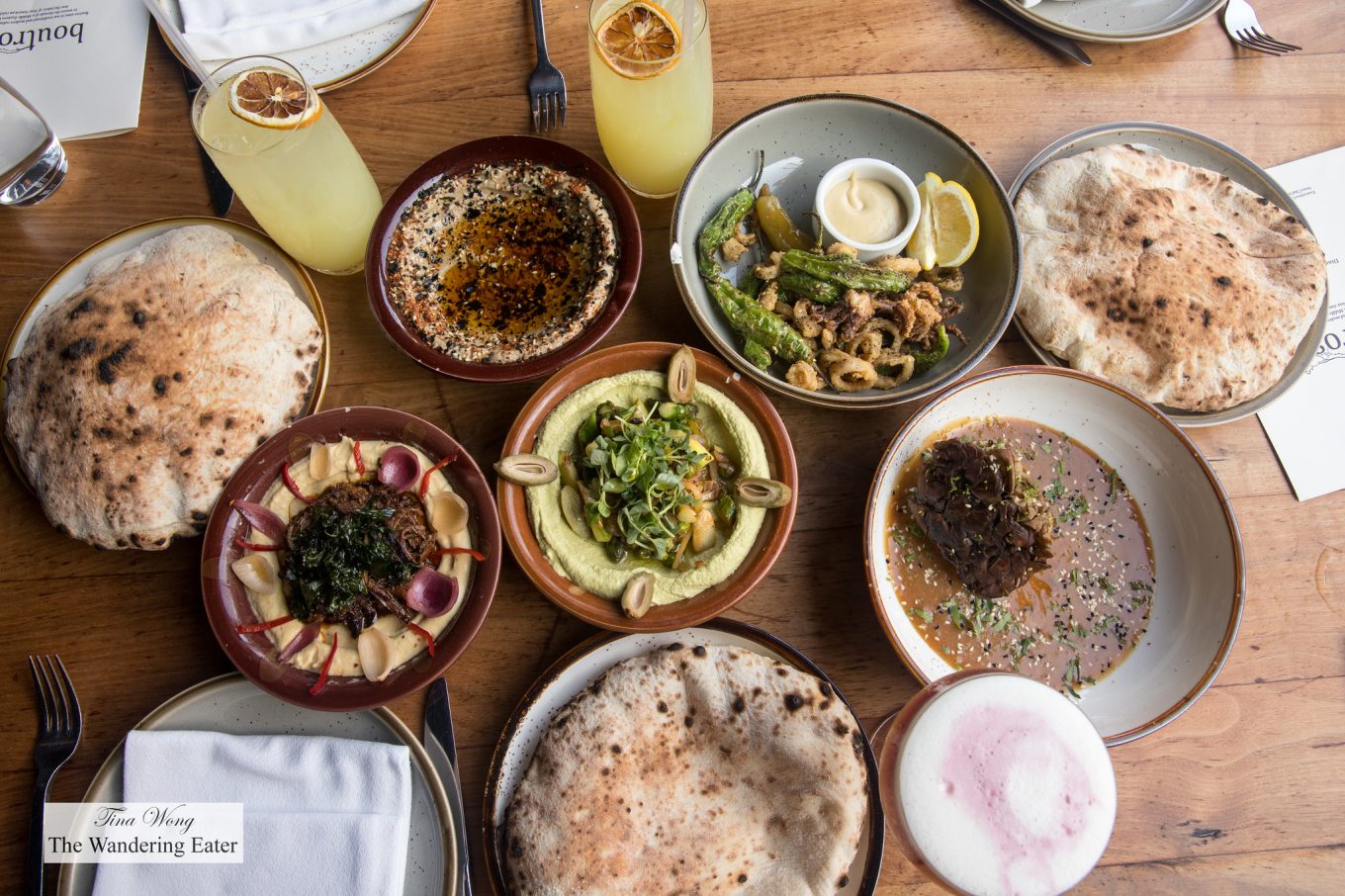 To be honest, I don’t schlep (meaning, make the long trip over) to Brooklyn Heights unless it’s worth it. What appealed to me to head over to Boutros has its unique take on Middle Eastern food and mesh it with Asian or Italian flavors – but it’s actually delicious. For example, miso baba ghanoush that’s smoky, nutty-toasty that has an undertone of spicy (from the togarashi), bittersweetness from the creamy roasted eggplant then served with the fluffy, fresh baked pita (that you can see their cook making it at their semi-open kitchen). It’s a mixture of rich flavors and mostly creamy textures that I don’t mind having just those two items almost every other night. Spring hummus was bright, vegetal and crunchy that tasted like early summer but wonderful in a pita. The short rib shawarma was a hit, especially for my dad who tends to be more carnivore than omnivore.

It’s really hard to pin what are the best dishes to eat there since there’s a lot of great things to eat. The most safest dish (as in solid but flavors aren’t too robust) was the fried calamari with shishito peppers. All of the other dishes we had, the flavors were fully punching on the palate.

I rarely order roast chicken from a restaurant but they did a pretty great job. According to Chef/Owner Alan, his staff brines the chicken for 12-24 hours, air-dry the chicken for a day so the excess water would drain and on the third day, that bird would be roasted. It’s a wonderfully moist, tender but not spongy chicken and the super bold cilantro-garlic sauce on top was bomb. (I hate cilantro but I would eat this because there’s equally robust flavors mixed in the sauce tempered down the cilantro.)

If there’s a singular dessert to order, I highly recommend the affogato. Although my affogato tower toppled, shown on this photo, it was delicious. The espresso that’s poured on this dessert was equal parts robust, chocolate-y and smooth and that Turkish coffee ice cream that I would happily buy a pint or two from the restaurant, if they would sell it to me.

I wish this restaurant was closer to home but I’ll consider a trek. It’s literally next door to the grocery institution, Sahadi’s so maybe it’s not so difficult to head for a meal at Boutros then shop next door for my pantry needs. Anyway, I adore the food and would head back soon.