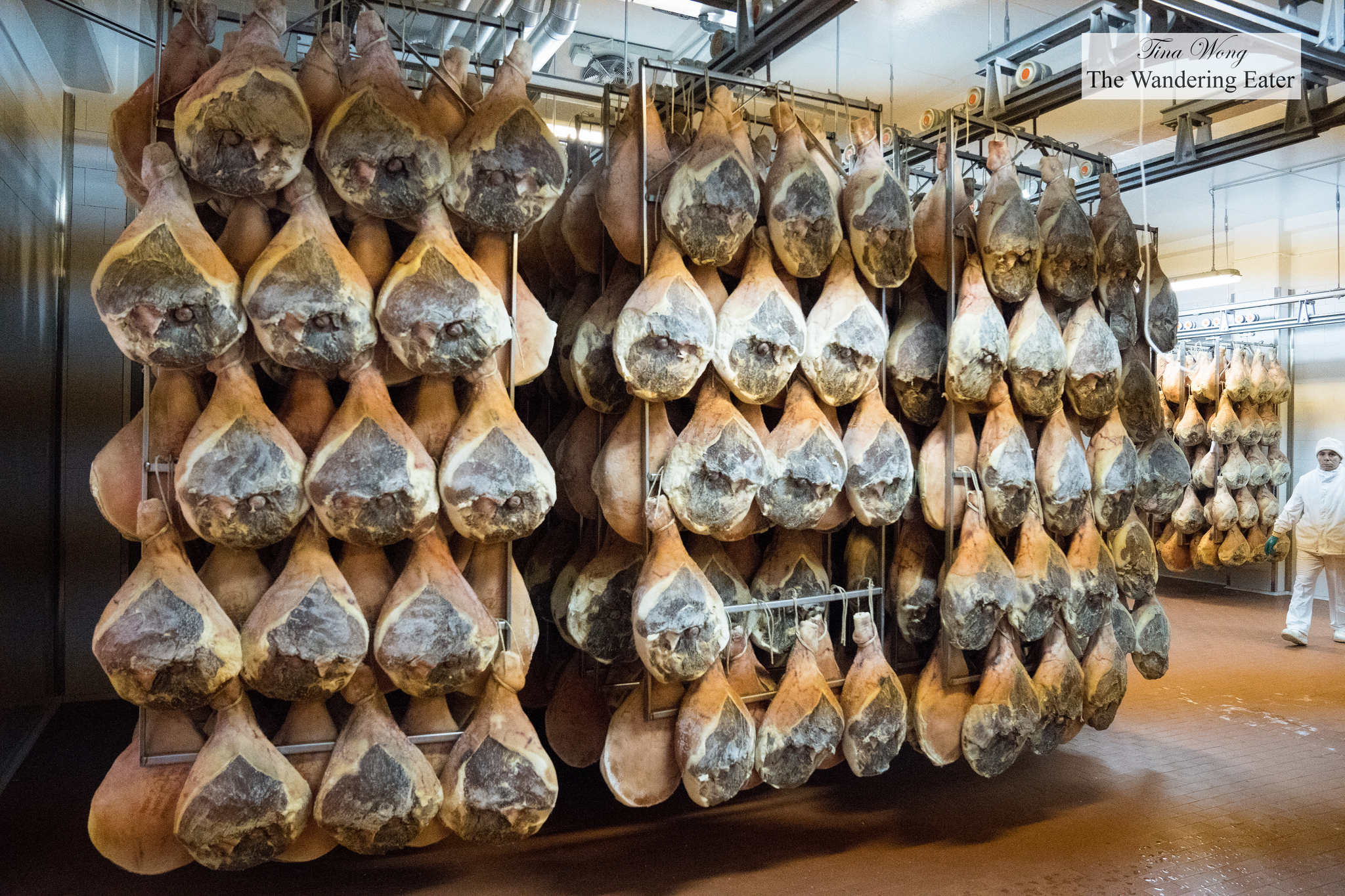 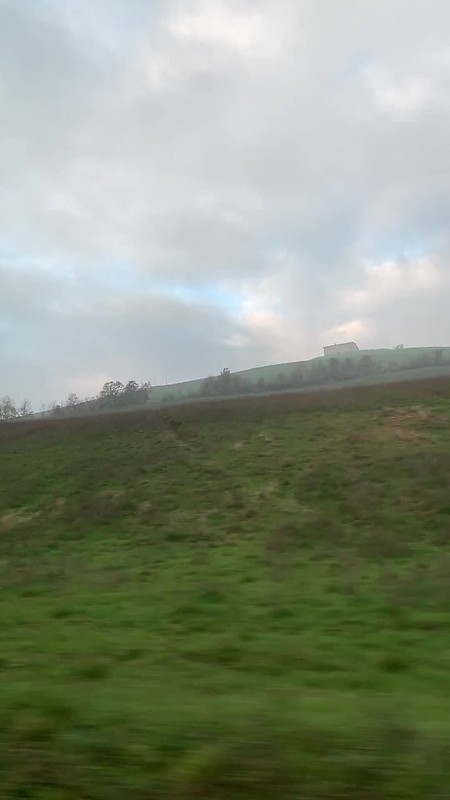 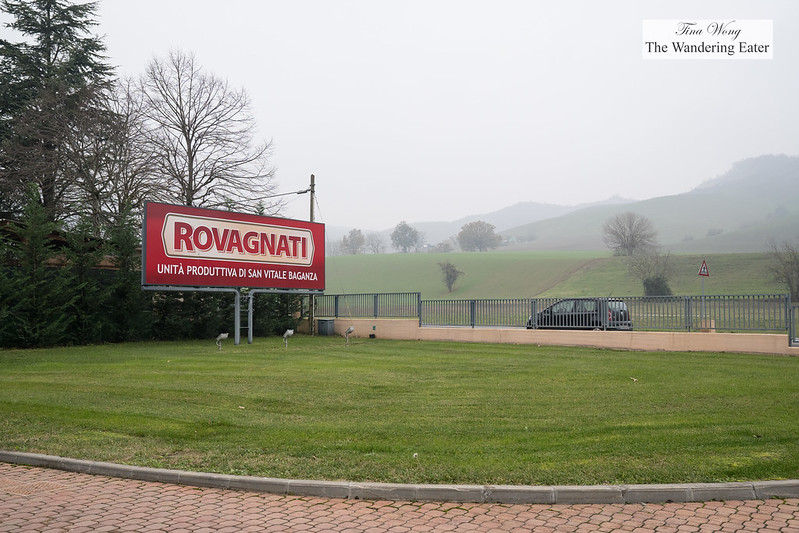 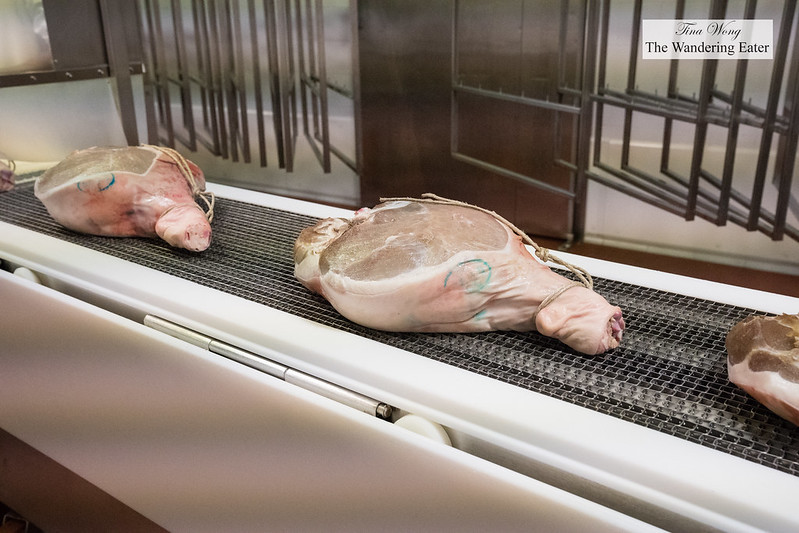 During my trip to Italy, I did make a stop over to the charming small city of Parma. When my friends and I rolled out of the train station in Parma, it looked very urban compared to the lush pastoral landscape I have seen in many food documentaries that took place in the city. I know it sounds naive but it’s the first thought that crossed my mind. Anyway, when we got to central Parma, it is a very cool place to be walking in the city where these ancient and grand Romanesque buildings adjacent to slightly modern buildings that look like they can stand another century if anyone let it.

Besides having the benefit of a day trip from the bustling, cosmopolitan city of Milan and dreamy Venice, my intention is to get to get a glimpse and understanding how Parma’s famous prosciutto crudo ham is made. So we drove about 30 minutes from the center of Parma one morning to meet with the Parma factory team of Rovagnati. It’s pretty cool to see the lush green hills with the gentle fog in the morning.

Rovagnati is a rare company of still being a family-owned Italian charcuterie company, started by Paolo Rovagnati after World War II (circa 1940s). The company currently have six production plants in various parts of Italy to make the respective charcuterie (e.g. Parma for prosciutto crudo, Felino for dry cured hams and salumi, Faenza for mortadella production, etc.). They are currently the top sellers of charcuterie in Italy and currently expanding in other parts of Europe and overseas (e.g. recently in the United States).

Before we started the tour, we had to wear the lab coats, paper shoe coverings and hair nets. We had off to the first room where fresh slaughtered and inspected pig legs arrive and get prepped for its curing processes. The legs get inspected by the company’s internal inspection team then get salted (by hand), onto a conveyor belt to get stringed and get its first salting. The pigskin is covered with humid sea salt, while the muscular parts are covered with dry salt. The leg is then refrigerated at a temperature ranging from 1°C to 4°C, with a humidity level of approximately 80% for about a week and gets a second thin coating of salt which is left on another 15 to 18 days, depending on weight. Salt is the only preservative used in the processing method, no chemical elements are allowed.

Next the hams hang for a period ranging between 60 and 90 days in refrigerated, humidity-controlled rooms, at 75% humidity. The meat darkens but will return to its original rosy color in the final days of curing. 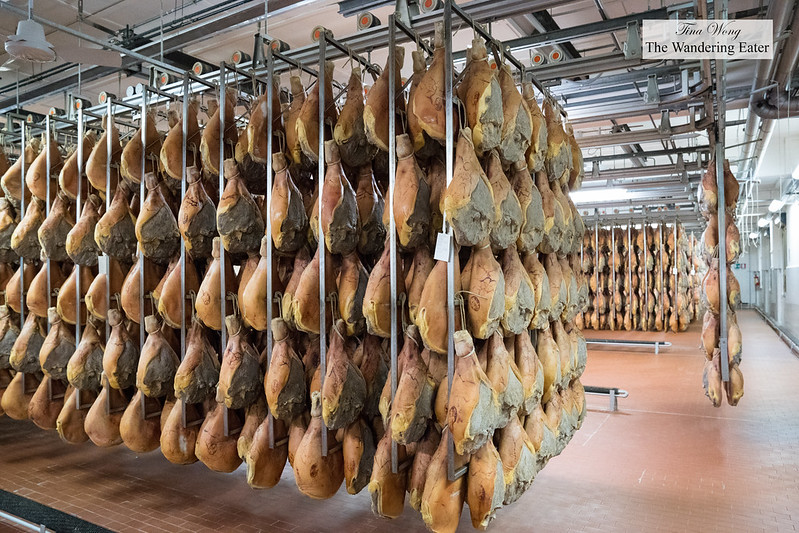 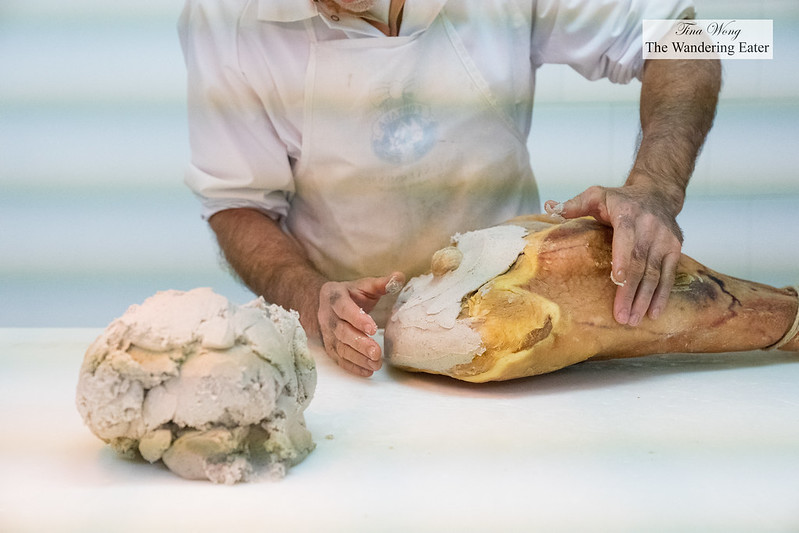 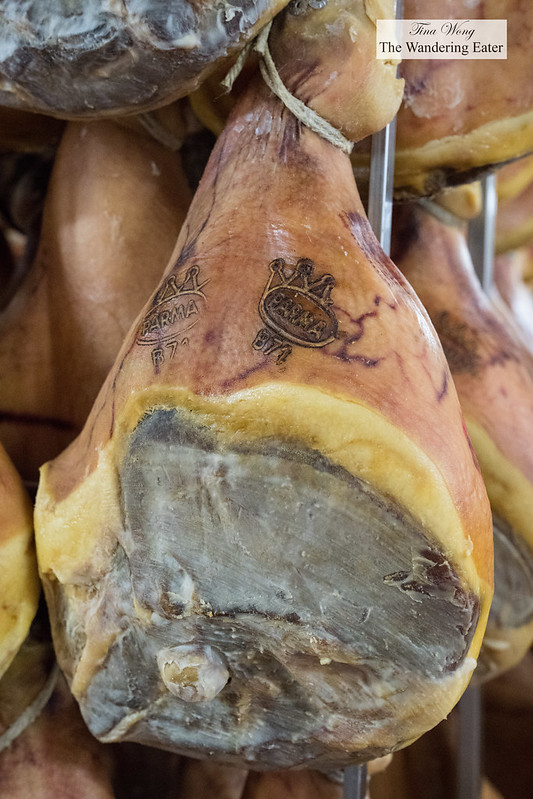 Now the hams are hung on frames in well ventilated rooms with large windows that are opened when the outside temperature and humidity are favorable. This allows for a constant and gradual drying of the hams. It is generally believed that this period is critical to the development of Parma ham’s distinctive flavor. By the end of this phase, which lasts about three months, the exposed surface of the meat has dried and hardened.

The exposed surfaces of the hams are softened with a paste of minced lard and salt in order to prevent the external layers drying too rapidly.

In the seventh month, the ham is transferred to the “cellars”, rooms with less air and light and hang on racks until the curing is completed. By law Parma Ham is cured at least 1 year (starting from date of first salting), and some may be cured as long as 2 years. For the United States, the regulations are different and the curing timeline is 300 days and it has to have its own curing room separate from the ones for the EU.

This tour was enlightening to see and understand what makes Parma ham Parma ham and the slight differences of what U.S. restrictions are compared to what is traditionally made does make a difference in the end but it’s subtle. At any rate, we had eaten quite a bit of luscious two-year old prosciutto crudo.