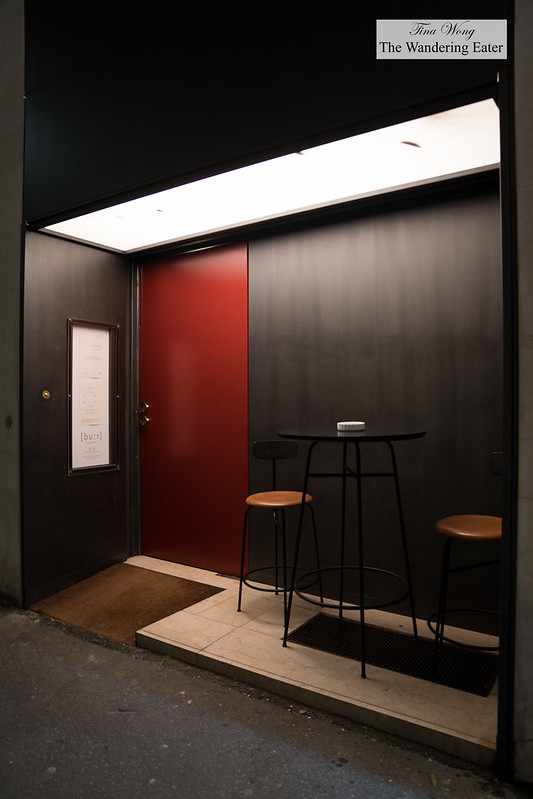 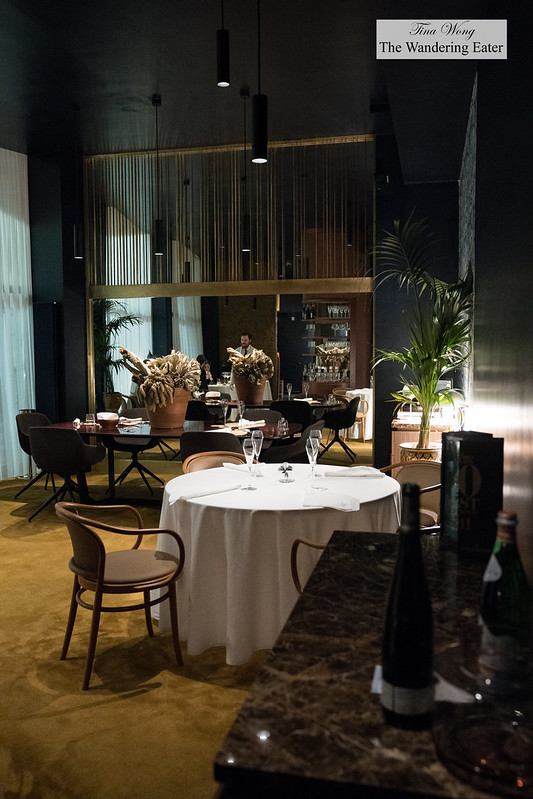 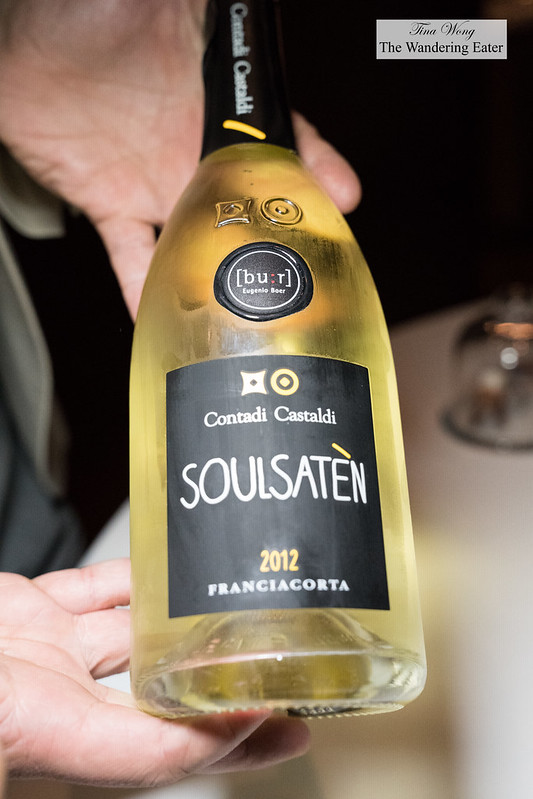 One of the most inspiring meals I’ve had in Milan was at Bu:r Eugenio Boer.

Chef/co-owner Eugenio Boer is a son of a Dutch father and an Sicilian mother, Eugenio Boer was born in Rapallo. He spent the first 7 years of his life in the Netherlands. He always wanted to cook, inspiration having struck early in the form of his Ligurian maternal grandmother who lived with the family.

Boer worked for some of Italy’s great chefs and to Kolja Kleeberg’s Berlin restaurant Vau. In 2011 he returned to Italy, to Milan, opening Enocratia (a wine bar and restaurant) followed by the more casual Fishbar De Milan and Elita, a fashionable cocktail and tapas joint. In 2015 came Essenza, a restaurant based on a deeply personal vision whose name translates as ‘essence’ but also as ‘honesty’. It received a Michelin star in 2017.

Eugenio’s food is rooted in seasonality and local produce but is also inspired by trips abroad, memories from the past and personal encounters that occurred along the way. Ideas come from all over and he loves contrast; of sweet and savory, simplicity and complexity, tradition and innovation. Sicily is a particular inspiration for the way different influences, such as French, Japanese, Korean, and even possibly Chinese, express themselves through its food and he admires Tuscany for its determined simplicity. Asian flavors also often find their way into his dishes and those early Dutch influences express themselves in the occasional use of butter over olive oil and a fondness for smoked pork. 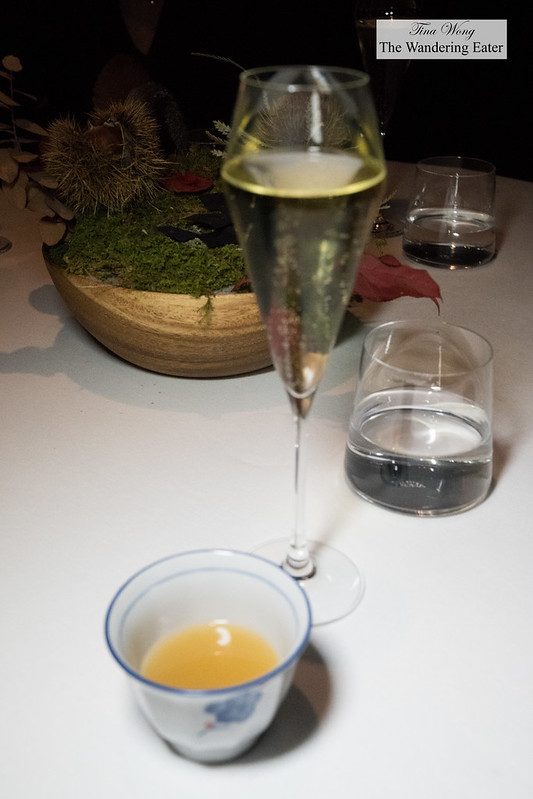 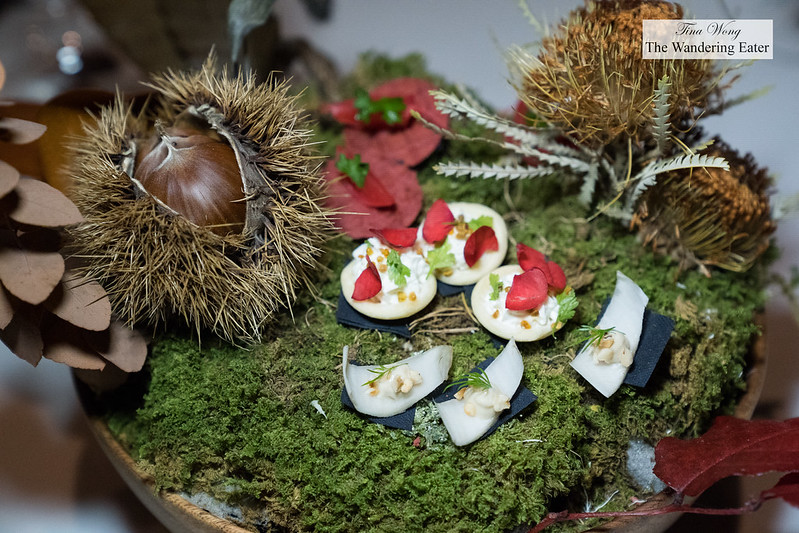 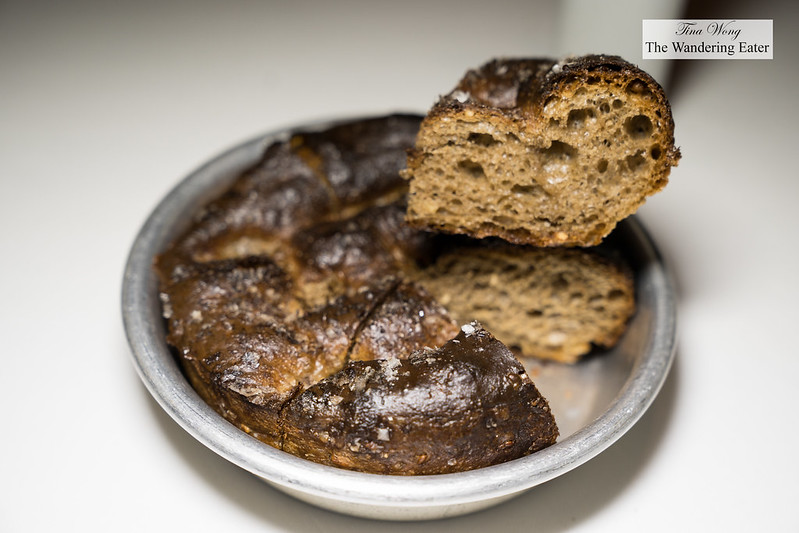 We started off with an incredible Franciacorta 2012 vintage from Contadi Castaldi that is actually a collaboration with the restaurant. It’s wonderfully yeasty, toasted bread flavors and good effervescence and strong bubbles like a very good Champagne. A dainty cup of chicken and white ginseng consommé had incredible depth of flavor and felt rejuvenating. The first round of bread sent out were thin, crisp grissini and a seven-grain focaccia based on Chef Boer’s Dutch-Italian heritage. The latter is quite smoky, nutty and has a bitter edge from the mixture of rye, barley and oats.

The gorgeous basket of amuse bouche arrived to our table with a trio of bites of endive with anchovy cream and walnut, rice flour cracker topped with goat cheese and flower petals, and beet root wafer topped with marinated radish. All of these delicately savory, fresh and the slightly bitter endive were very tasty. 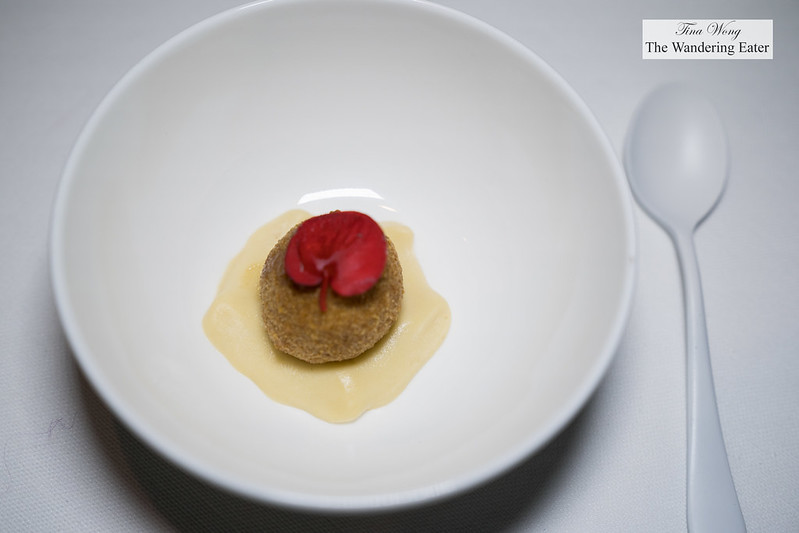 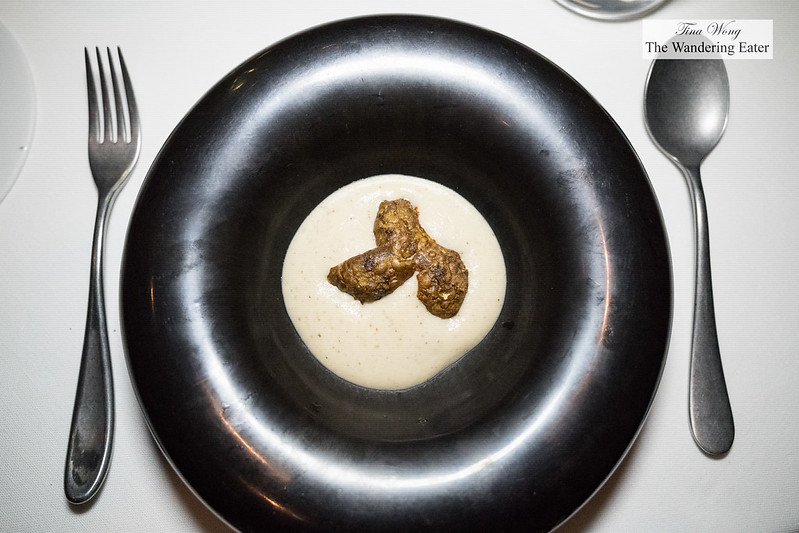 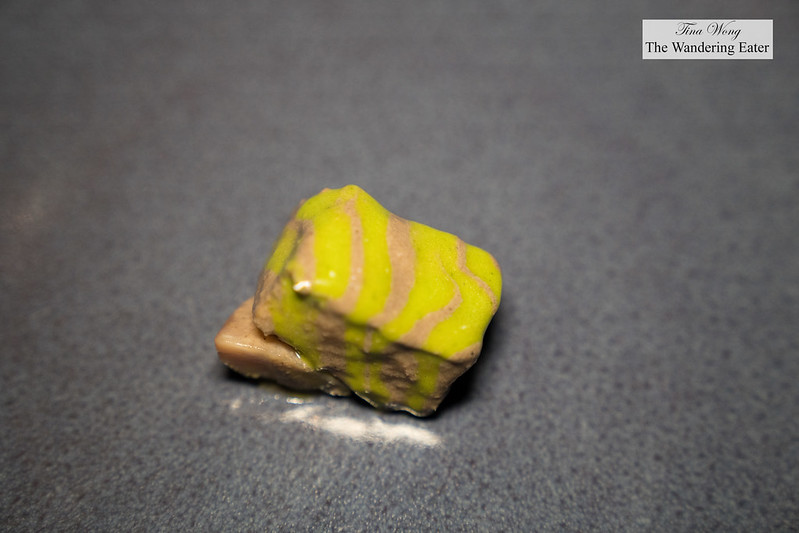 The croquette with anchovy cream was nicely crisp orb with a creamy interior. The anchovy cream wasn’t too overpowering with its fishiness. The next course of crispy artichokes, pepper, walnuts with bagna cauda sauce was tasty and the overall flavors were gentle despite the fact the bagna cauda sauce tends to be potent. palamita also known as Atlantic bonito fish is roasted then covered in a beautifully striped sauce made of its liver, walnut and parsley giving it a red meat type of flavors. There was a very interesting wine pairing with the Clemens Busch (alter)native Riseling 2016 that smells like delicate honeyed apricot but it’s quite dry and almost savory on the palate. I adore that wine. 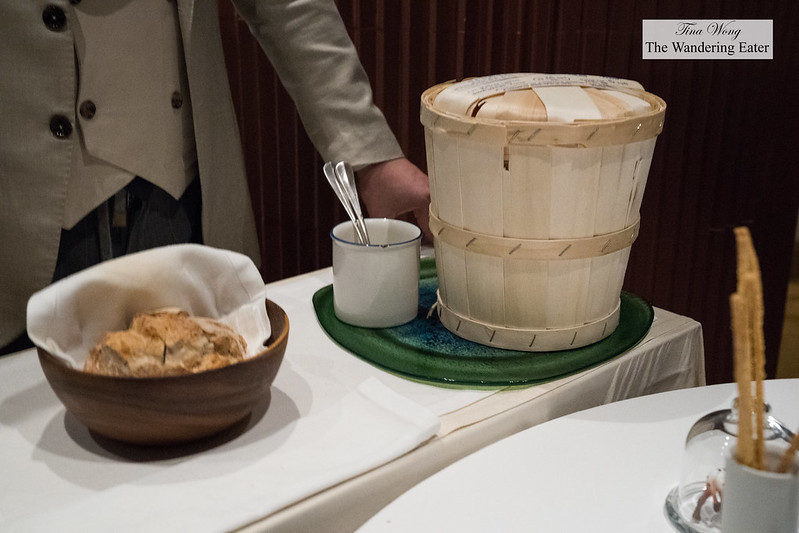 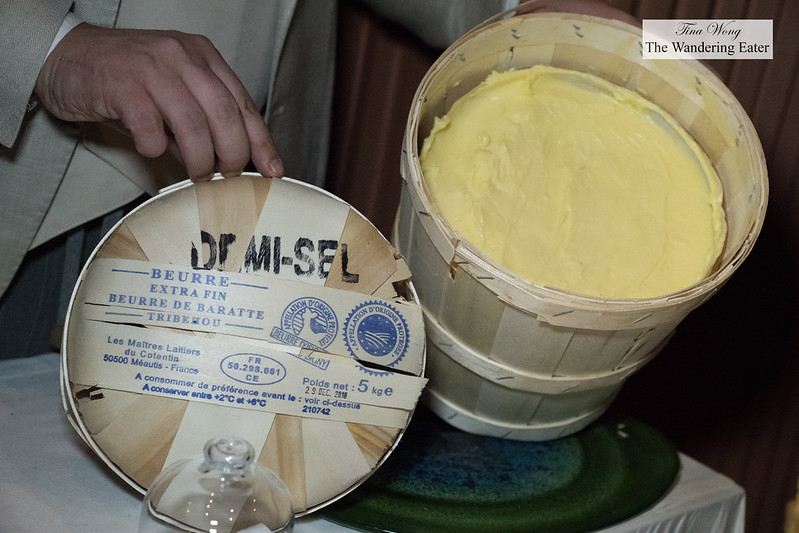 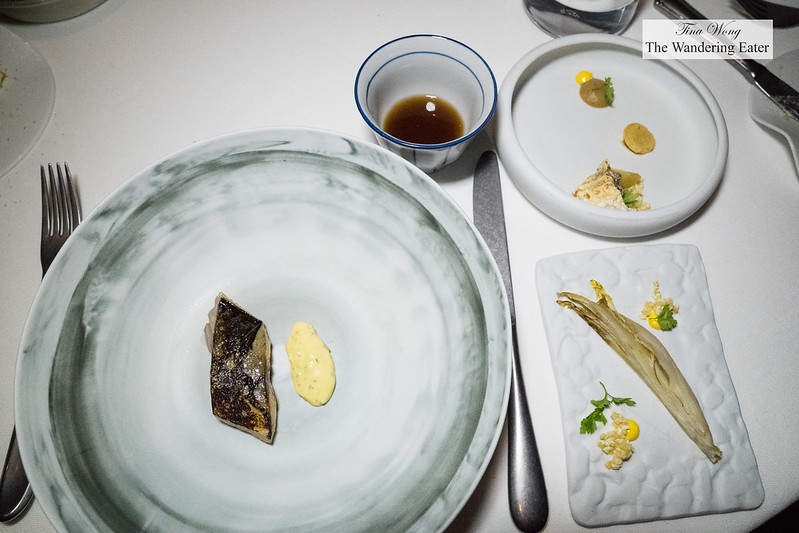 This particular multi-sectioned course, if you will, was one of my favorite parts of the night. The first part was the fun story that started with the plastic model cow under the glass cloche. We were informed that the bread course is typically placed in the beginning of the meal and tends to fill many diners’ stomachs before the meal is done so the chef chose to move it to the middle. Also, the presentation of the five kilo bucket of extra fine, demi-salted beurre d’Isigny with a small boule of warm, rustic bread. I would be a very happy person just to have that mind blowingly delicious butter and bread and call it a night.

But no, it was shortly followed up with a Japanese ichiju-sansai inspired meal. This time the chef served marinated mackerel with tartar sauce, a side of glazed endive salad, marinated white beet root, and an incredibly savory and complex cup of mackerel of dashi and sesame oil. The mackerel was wonderfully tender and meaty flavored and the tartare sauce added some briny flavors with the capers mixed it the creamy sauce. The endive served almost like a palate cleanser and the marinated beet served as the pickle dish but much more delicate than what a traditional Japanese would. This course was unexpected and pretty awesome. 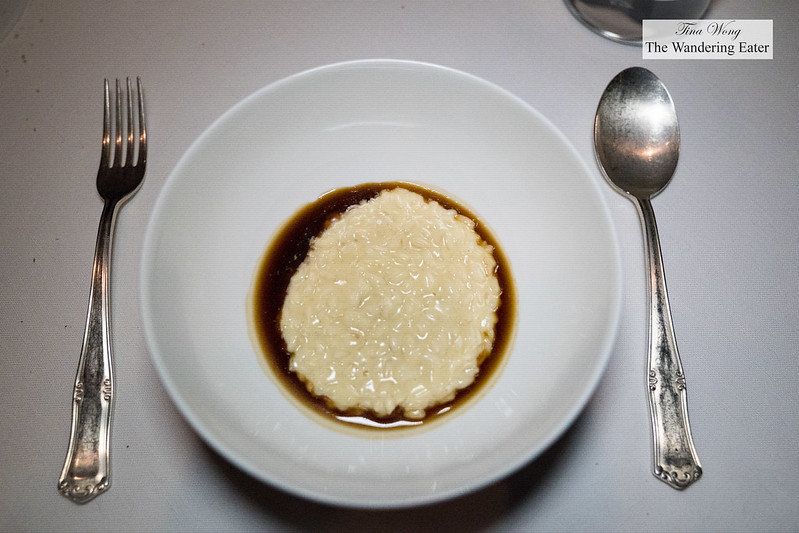 Risotto is served almost everywhere in Milan since it’s part of the Northern Italian culture. Chef Boer took inspiration of his risotto from the recipe from Gualtiero Marchesi, the first Italian 3-starred Michelin chef. This risotto is made with butter and Parmesan cheese that’s creamy and perfectly cooked rice and the veal sauce is brightened with lemon so it does not weigh you down as much. 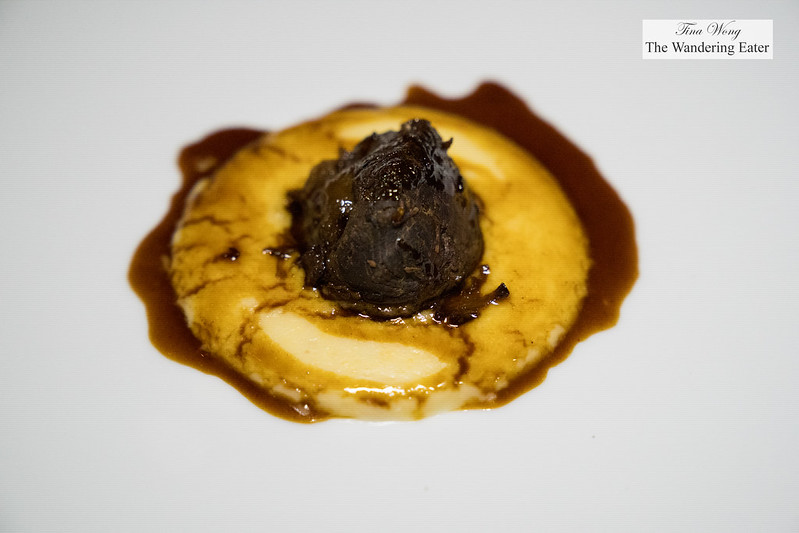 The final savory course of the night was this super bold braised beef cheek with paprika and cardamom sauce on a “dirty” Fontina cheese polenta. Interestingly, flavors can definitely cross borders since my Korean friends giggled and commented amongst themselves that it reminds them of their childhood dish and for my Chinese upbringing, it reminds me something similar to a stew I’ve had as well. The obvious outlier for the dish for our collective experience is the Fontina polenta but otherwise we get the big, spiced flavors and we were smiling on that food memory. 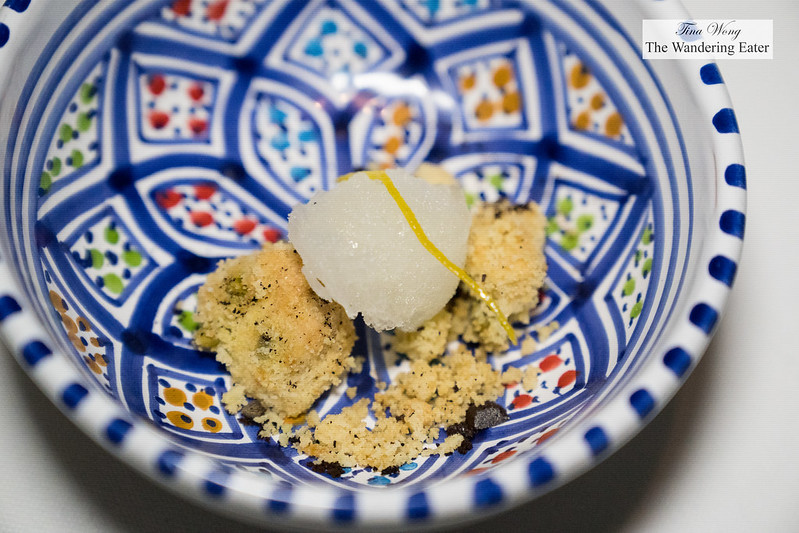 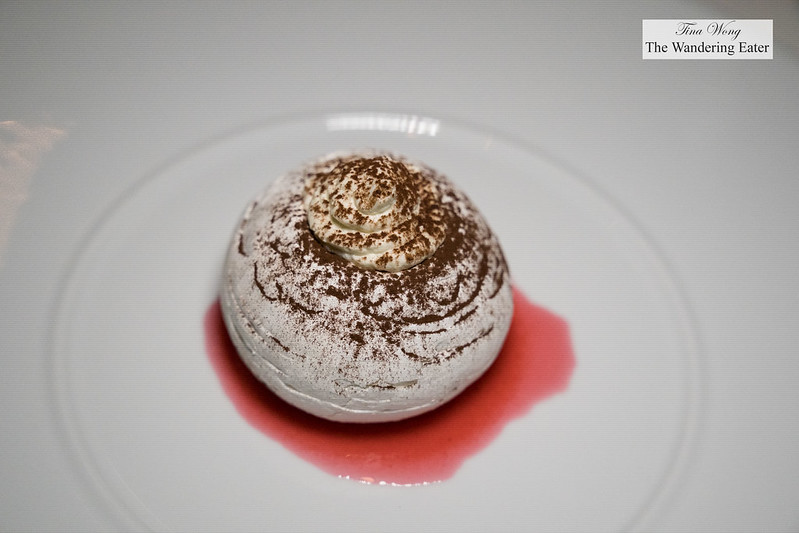 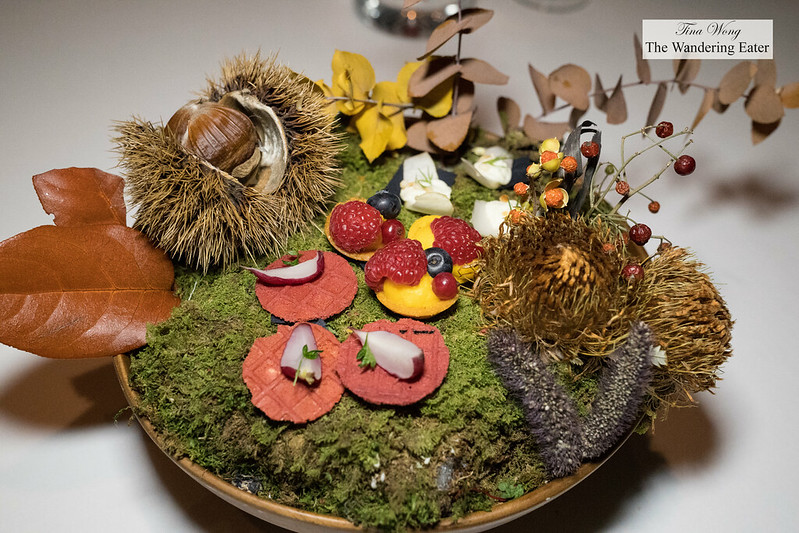 For all things sweet, we had a very good pre-dessert of lemon sorbet with crunchy almond, pistachio, coffee and dark chocolate cake crumbles. The actual dessert is an minimalist looking meringue filled with mascarpone cheese, cocoa and set on top of a black carrot and green apple sauce. This dessert was interesting that it’s sort of tastes like a tiramisu but without the coffee flavor and the vegetable sauce was gently sweet.

The mignardes served after dessert brings back the beautiful basket but this time it’s slightly sweeter than the amuse bouches but barely. (Great for those who do not care for sweets.) The beet root wafer topped with candied radish was vegetal sweet. The passion fruit curd tart with red fruits was closest to dessert but it’s more tart than sweet, and the endive with white chocolate and walnuts was the most unusual but it was good.