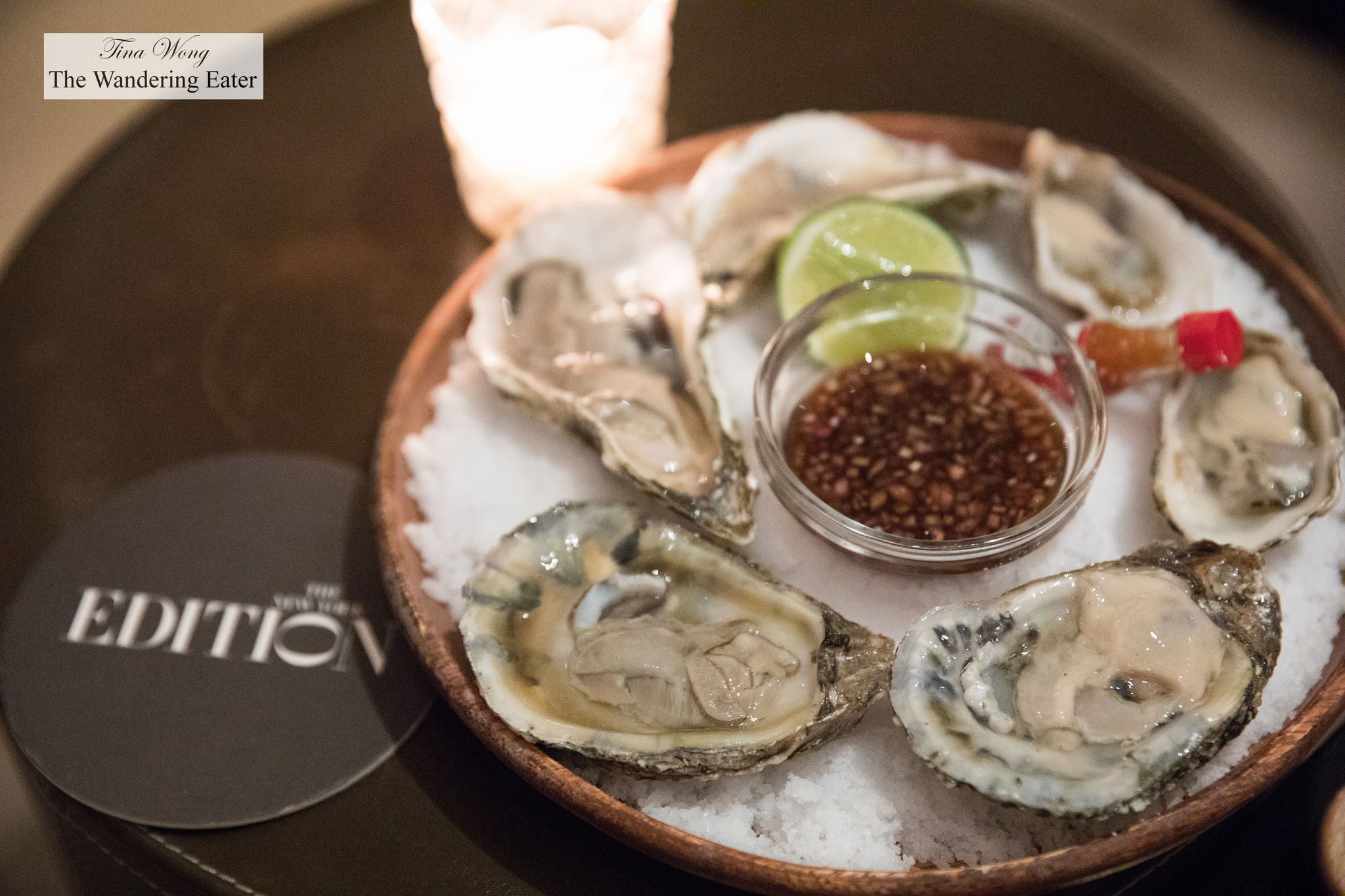 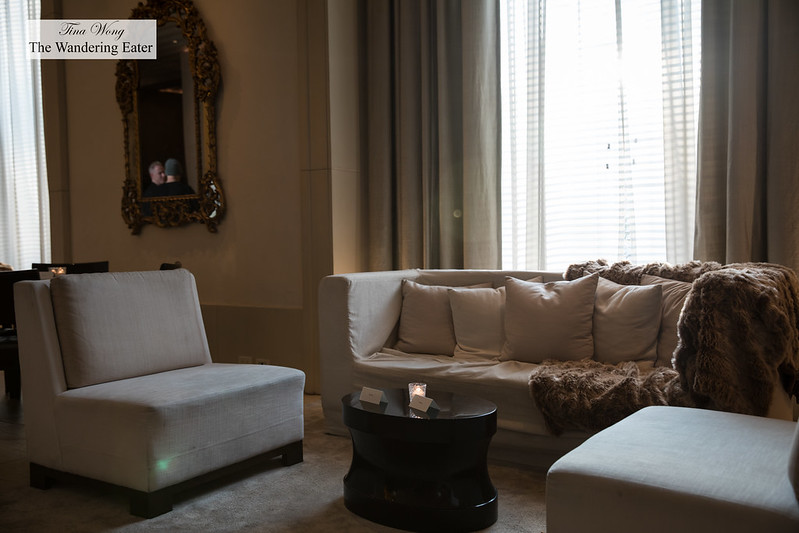 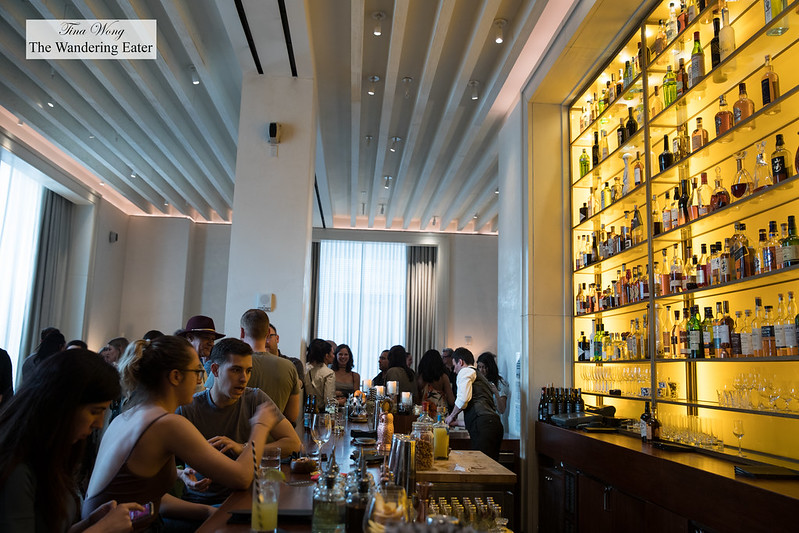 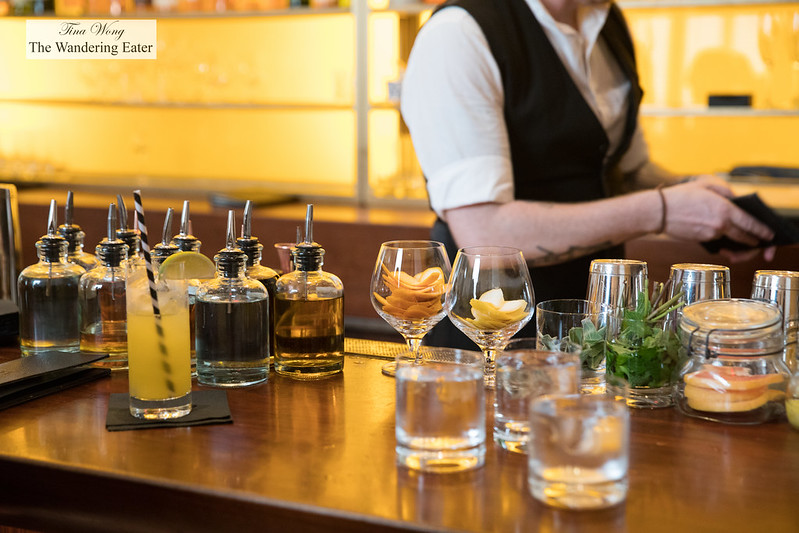 There are times when you want to have drinks that isn’t in a speakeasy atmosphere (general norm in NYC) but feels like you are in an elegant living room. That place would be at The New York EDITION Hotel‘s Lobby Bar. One of the chic hotels in New York City, it’s designed by Ian Schrager known for his minimalist aesthetic, and all of the EDITIONs are trendy spots in hip cities. The building, which was erected in 1909 as the Metropolitan Life Insurance Company Tower, is known for its picturesque clock tower, blending history with an elegant, modern hotel right by Madison Square Park (and literally several yards away from Eleven Madison Park).

The Lobby Bar has minimalist decor done in beige and cream colors outfitted with comfortable couches and sofas covered with the signature fur blanket, artfully draped. It’s inviting and feels like an upscale living room.

During the early part of the evening, it was bustling with people since there’s a crowd from a private event reserved for the front half of the bar and the back area are filled with tables of the after-work crowd. 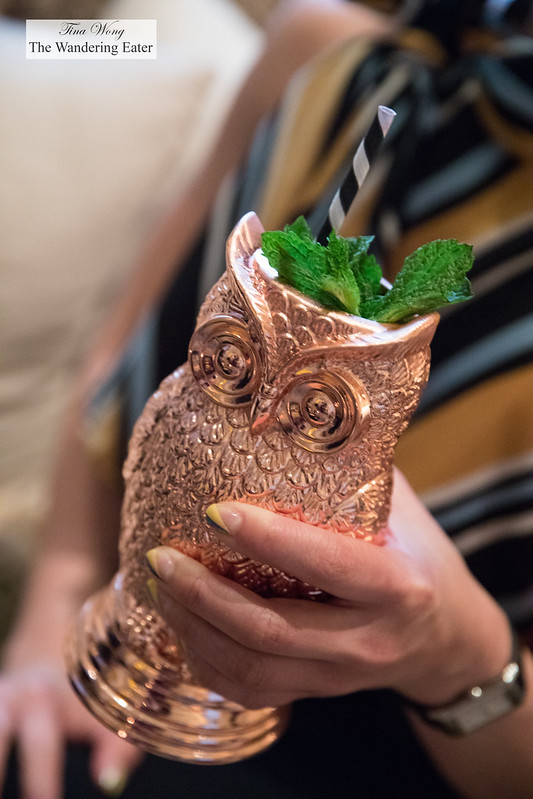 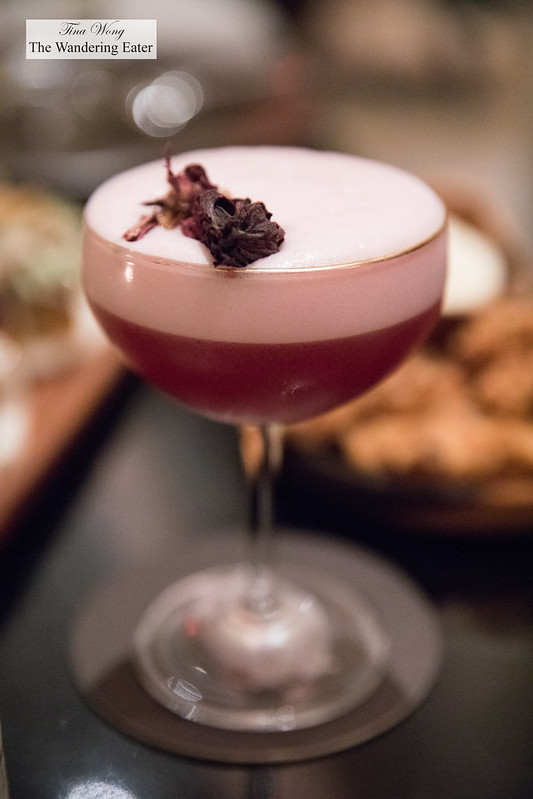 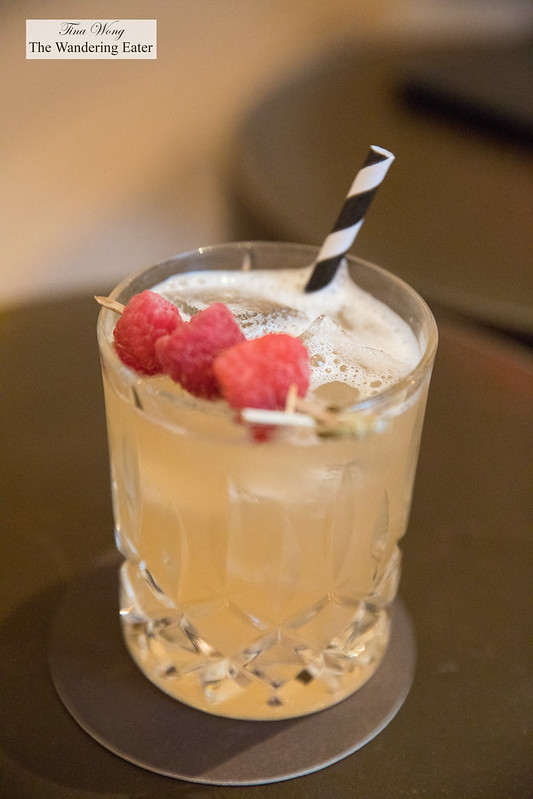 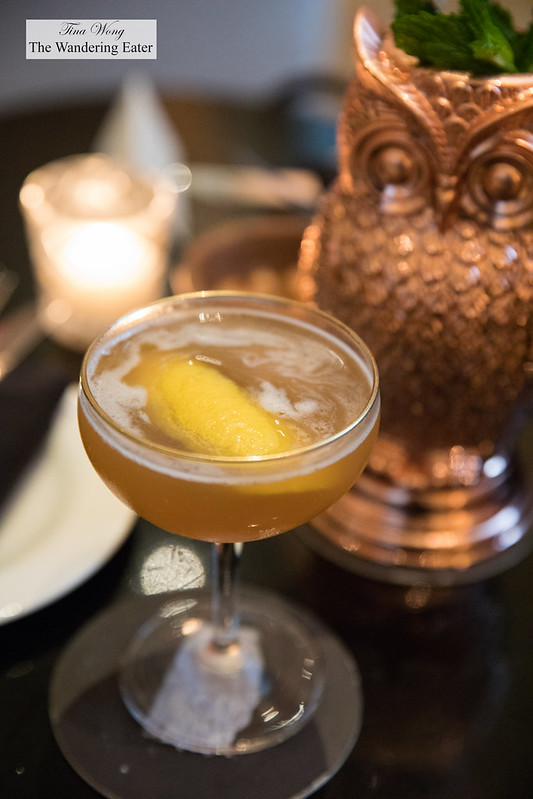 My two friends and I had a few rounds of cocktails. The Edition Owl is an ELYX Vodka cocktail mixed with pomegranate, Boulard Calvados, and Mumm Champagne arrives in a shiny, heavy copper owl-shaped mug. It’s a dangerously easy drink – light, refreshing and gently fruity and not too sweet. The Whisky Business – a Glenmorangie scotch based drink flavored with hibiscus, lemon and egg white foam. Though it’s a scotch cocktail, its inherent peaty and smoky flavors were toned down that we tasted the tartness of the hibiscus and the egg white made it smooth and creamy on the palate. Mezcal Mama, made of Gem & Bolt mezcal, jasmine, raspberries, agave, and lime is a gently smoky drink with the fruity tartness of the raspberries. Earl of Jalisco was our favorite drink – Earl Grey infused Volcan tequila, agave, peach liqueur, and lime there’s some floral complexity from the Earl Grey and the sweet peach liqueur and it’s a very smooth drink. 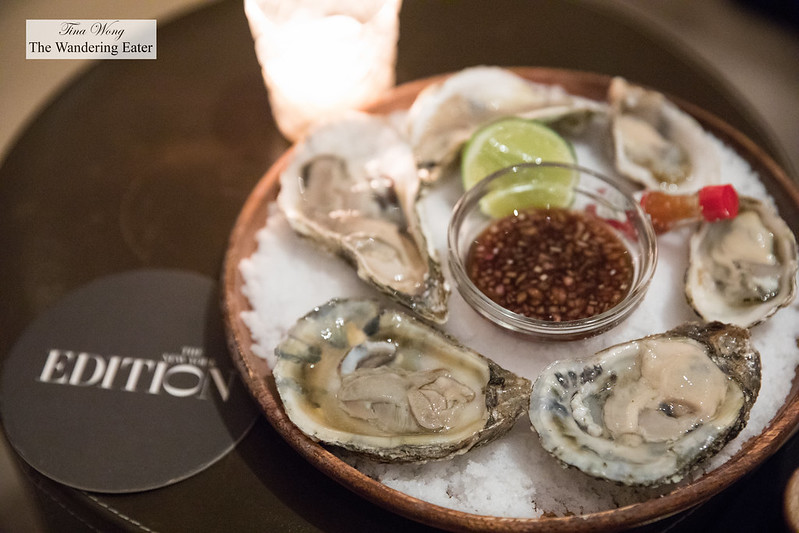 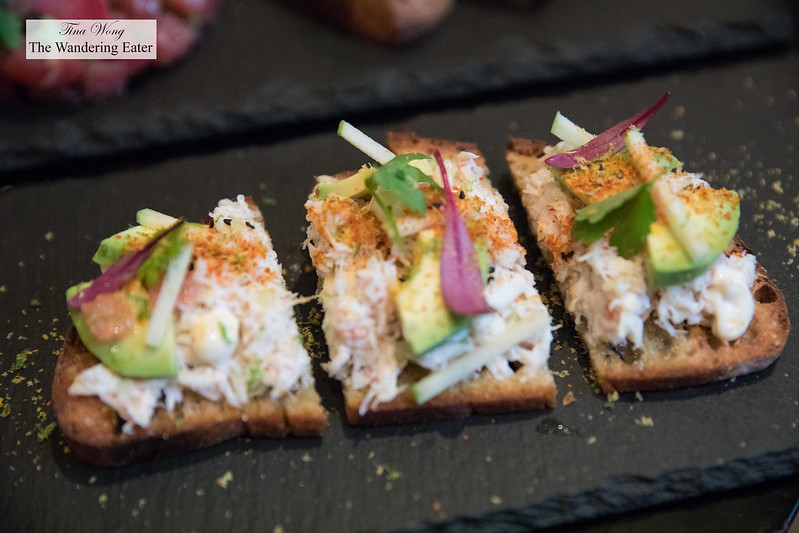 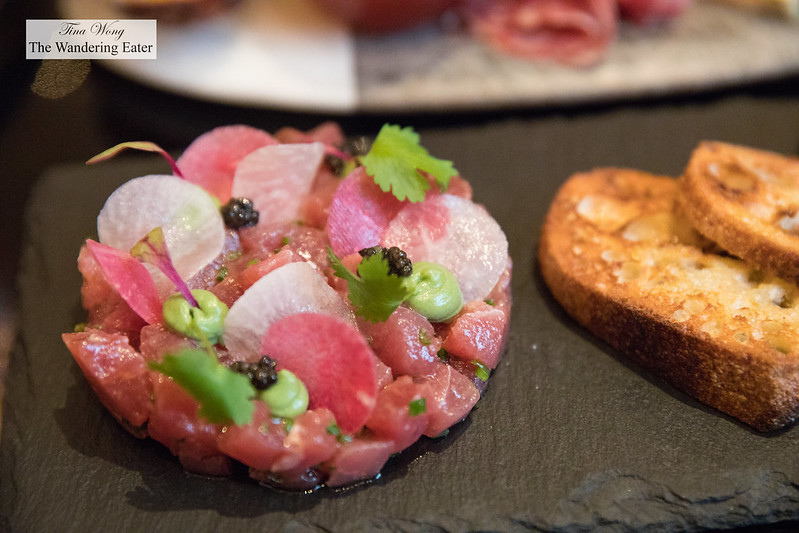 Since we cannot have the cocktails alone, we ate through most of the menu. For the raw seafood portion of the menu, the sweet and meaty half dozen oysters served with a classic mignonette of shallots in red wine vinegar. The crab toast topped with grapefruit and avocado was very tasty with the sweet crab meat, creamy avocado with a touch of citrus to brighten up the toast. The tuna tartare topped with caviar, avocado, and radish was meaty since the fish was cut to a larger dice and there was a nice balance of flavors between inherently sweet, bites of nutty and salty from the caviar and creamy from the avocado. 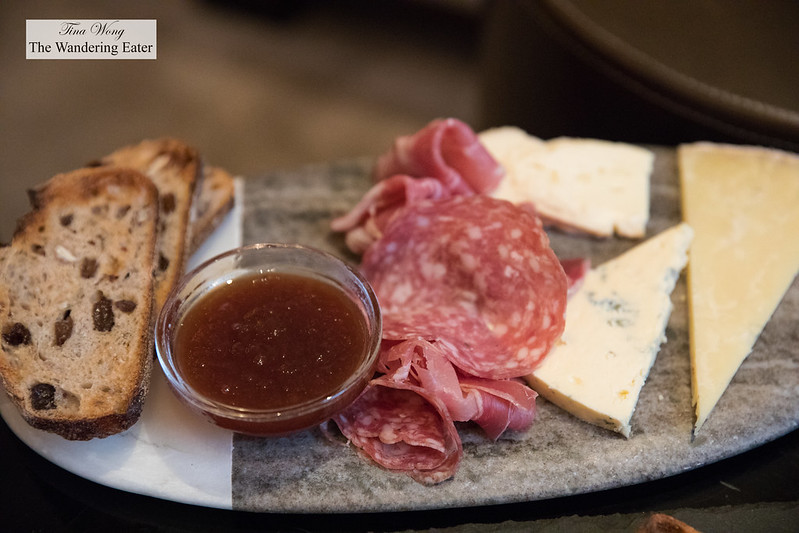 The platter of cheeses and cured meats were easy to like. A trio of cheeses – a meaty, round tasting manchego, a creamy, not pungent blue and a creamy brie and slices of prosciutto and salami. The apple butter and crispy, thin raisin walnut toasts worked well with the meats and cheeses. 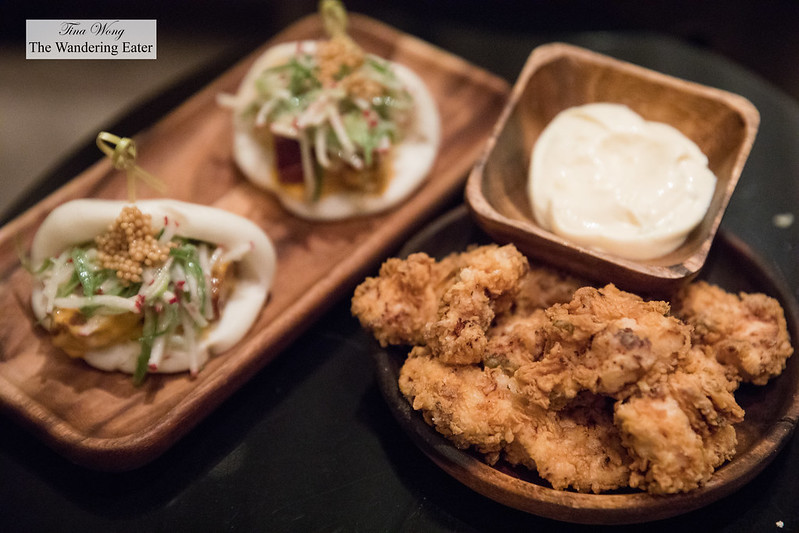 For something cooked, a pair of pork belly buns topped with cucumbers, spiced mayonnaise, and mustard seeds were good. The buns were fluffy, sweet and heated perfectly and filled with large cubes of meaty pork belly. The pickled mustard seeds added the needed acidity from the hefty bites. The buttermilk fried chicken bites were juicy, well-seasoned chicken pieces but the fried batter coating wasn’t crisp enough to make it truly resonate but the aioli was a good dipping sauce for the chicken.

Overall, it we had a very good time to spend time and linger at the Lobby Bar. The staff was warm and accommodating. The food was tasty and the drinks were balanced and flavorful.