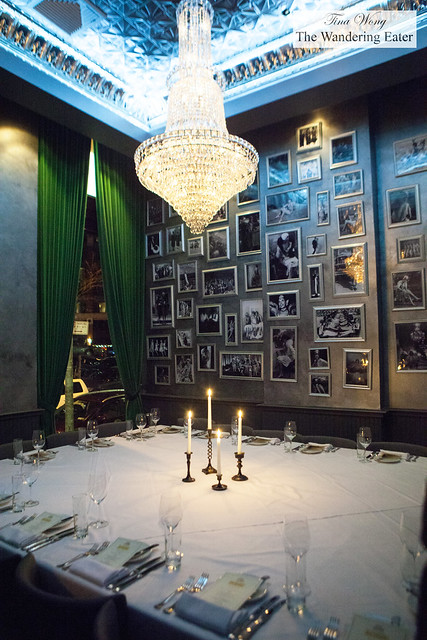 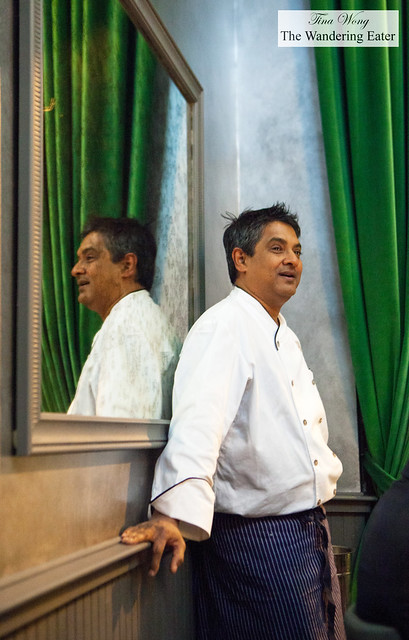 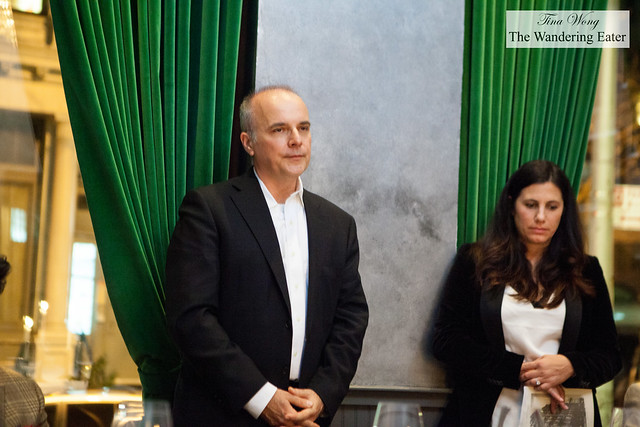 In celebration of the December 2nd Blu-ray and DVD release of The Hundred-Foot Journey — starring Helen Mirren, directed by Lasse Hallstrom and co-produced by Steven Spielberg and Oprah Winfrey. I was invited to join the author of the novel that this movie adapted Richard Morais and Chef Floyd Cardoz (Executive Chef of White Street) who was one of the four culinary consultants for the movie, and others, for an exclusive culinary experience and discussions about the film, culinary arts, food and family dining at White Street.

What was interesting about having Chef Cardoz on this film project is the fact that the movie (or novel) isn’t too far from his background. Cardoz emigrated to the U.S. with the hopes and dreams of working here and a deep passion for cooking. He eventually became a successful Indian chef in the U.S> (what really made his name was when Danny Meyer’s restaurant Tabla was around and winning Top Chef Masters, Season 3). 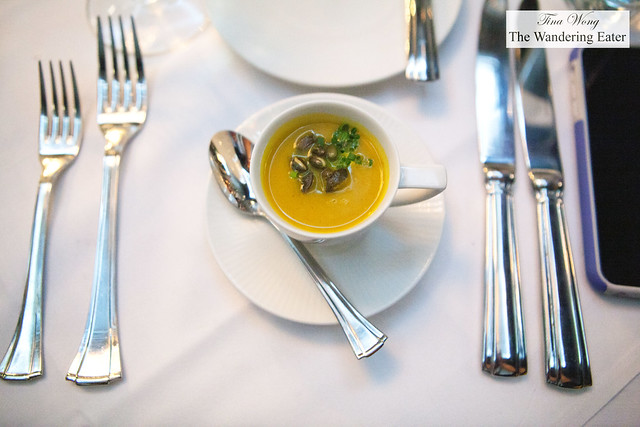 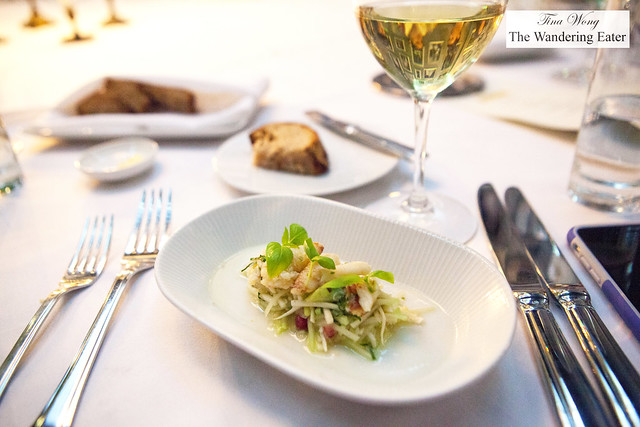 Chef Cardoz did a fantastic job cooking our meal that evening. Everything was indeed delicious and flavorful and it did go along the lines of the film’s themes of family and the flair of spices in Indian cuisine. The cup of warm, silky pumpkin soup (made without dairy) topped with pumpkin seeds and a small dollop of sweet-salty ricotta was great, especially for the chilly night. The Maine crabmeat salad topped with very refreshing bites of small Thai basil, sweet-tart pomegranate arils, and finely sliced green papaya. That salad made me think of Thailand for a brief moment. 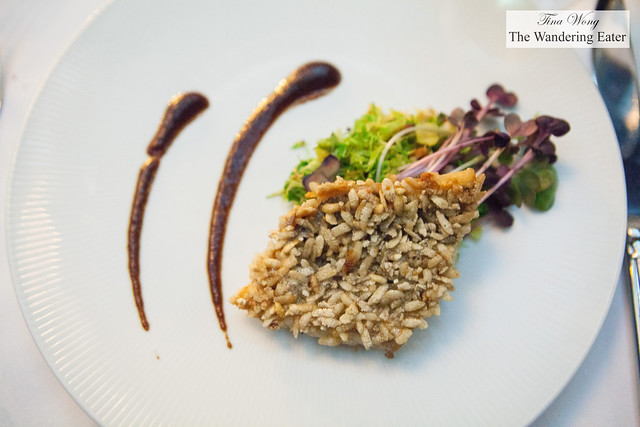 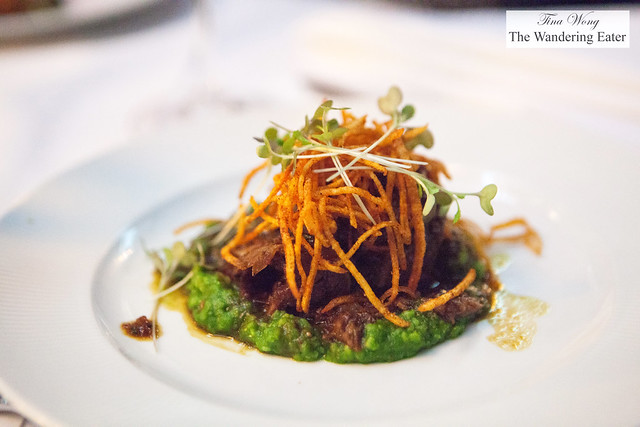 Cardoz’s wife Barkha was present and told us this very quaint anecdote about the short ribs. These short ribs (done a little simpler at their house) are an equivalent to the family’s Sunday roast and Floyd has to be at the dinner table in order for them have dish.

The best savory dish of the evening was the braised beef short ribs. Not just because the back story was touching but it just taste awesome and each bite were flavor bombs in my mouth. Super tender cubes of beef that’s packed with tons of flavor. The delicately crispy shoestring potatoes were gently spiced with what tasted like smoked paprika to give the dish a little more oomph. 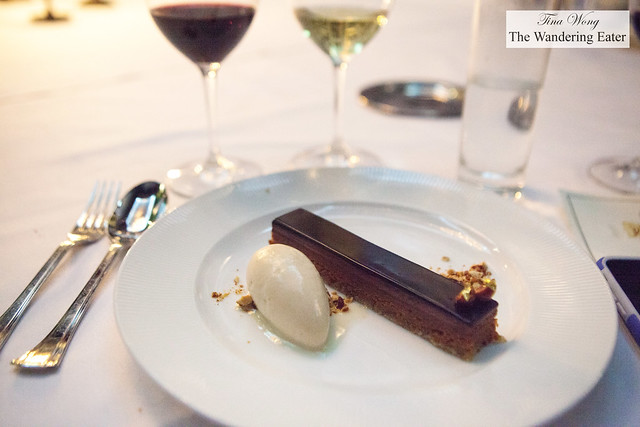 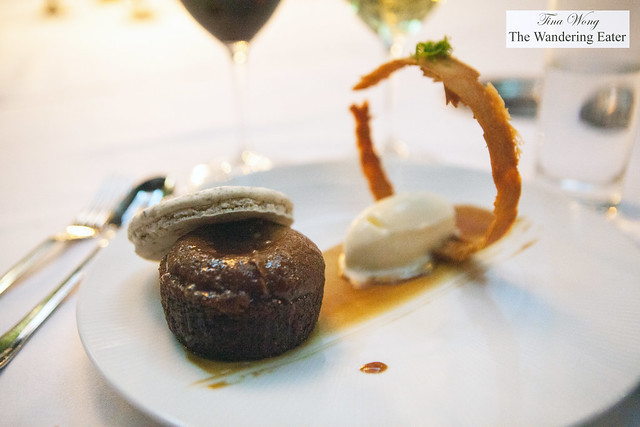 Desserts were certainly pleasing to everyone at the table with a choice of crispy peanut crunch and sticky toffee pudding. The former is crispy from the mixture of hazelnut praline and feuillatine flakes embedded and topped with a creamy, not too dense peanut butter mousse and a side of peanut butter ice cream. The sticky toffee pudding was loved and some of the ladies said out loud that this pudding is so good that she wanted to hug the pastry chef. Comforting, sweet (but not overtly so) and very good.