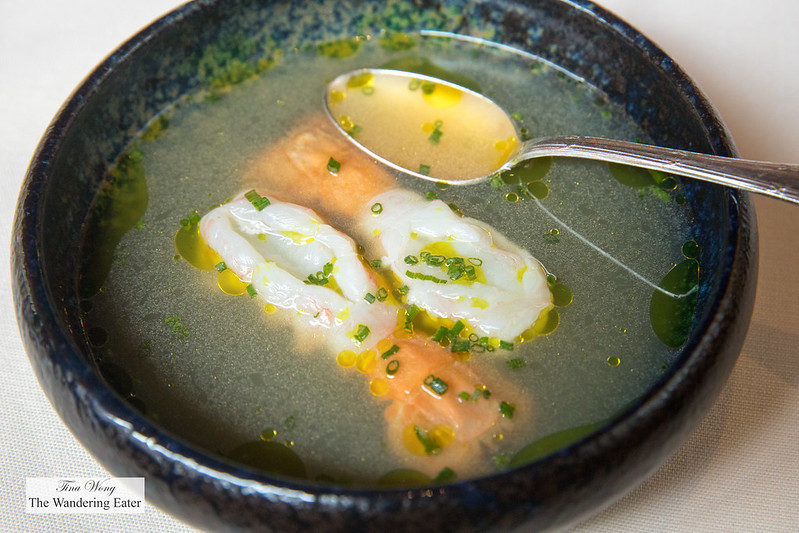 Restaurant Le Duc is a sophisticated seafood restaurant that does make you think you’re in a yacht even though you’re in the middle of the Left Bank of Paris.

We were stunned by the superb, classic seafood dishes created by Chef Pascal Hélard and his team like sea bass carpaccio served with a plate of buttery toasts topped with thyme, luxurious but minimalist langoustine broth with two meaty tails of said crustacean. A John Dory cooked in a daffodil yellow pool of French butter with vodka was impossibly delectable and you would seek for a slice of crusty bread to mop that butter sauce. The moments where Chef Hélard looks to Asia like the an amuse bouche of bonito and wasabi that’s both bright, clean and ocean-y.

The bite that really blew my mind was this thin slice of sea bream that’s rolled up with thin twigs of dried tuna heart. It’s umami driven bite where the dried tuna heart is chewy like jerky and it has the minerally deliciousness that one would expect eating a heart. The silky sea bream just contrast the tuna heart wonderfully. It’s ridiculously simple looking but it’s wonderfully complex. The desserts were old school French like stewed prunes in Armagnac (ridiculously good) and Île Flottante were enjoyable and not too sweet, which was greatly appreciated. It’s a delight to dine at Le Duc and the waiters were professional and friendly.