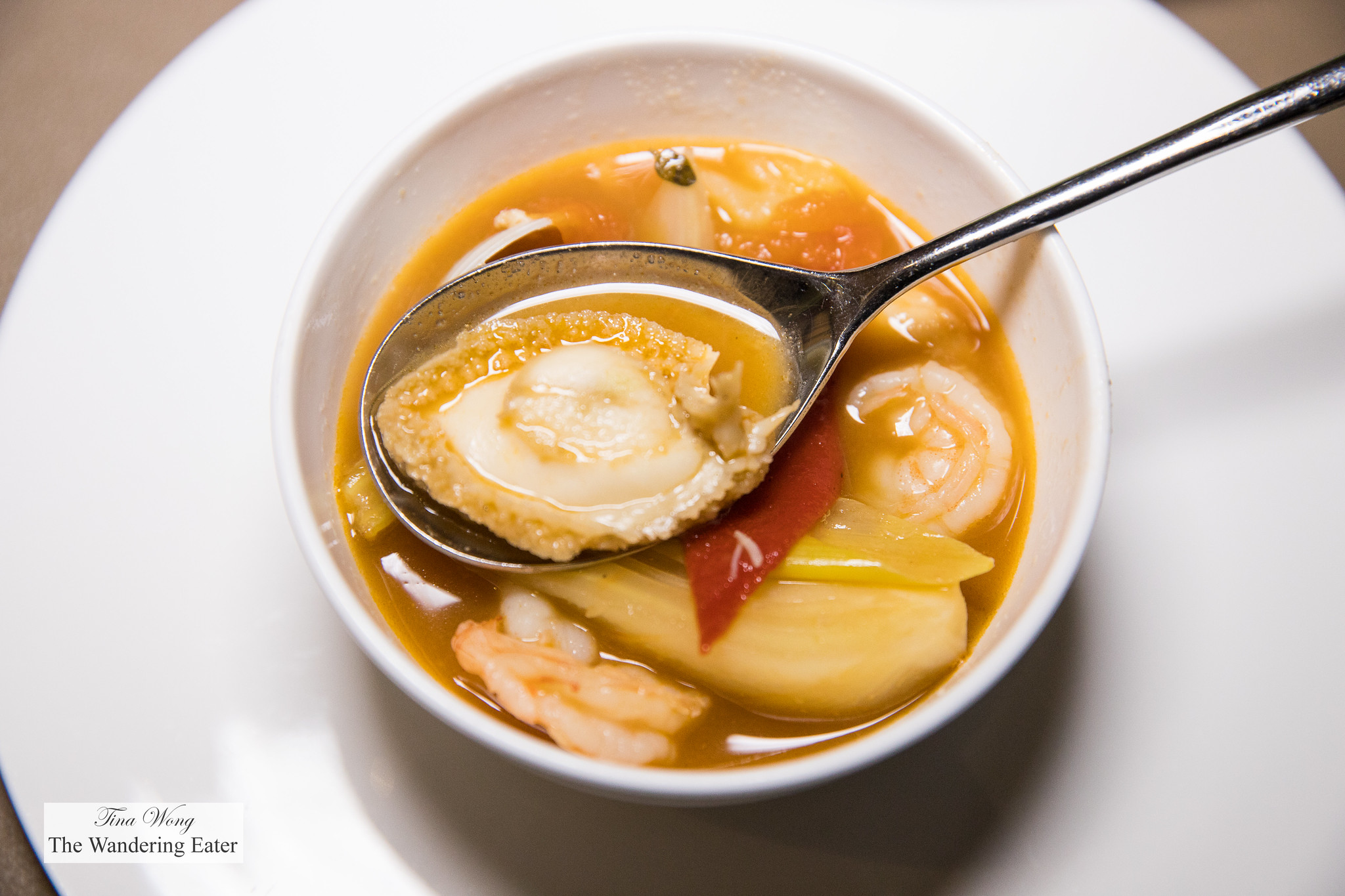 Usually I don’t seek another cuisine outside of where I’m traveling. For example, when I’m in Shanghai, I would typically eat Chinese food or eat the local region’s cuisine. However, I made an exception with Cafe Gray Deluxe at The Middle House.

Chef Gray Kunz, who is named after this restaurant and owns, is one of the most revered chefs in the world. He made his name at the New York City restaurant called Lespinasse in the 1990s and started his own restaurant Cafe Gray at the Time Warner Center in 2004-2008. I remembered eating at the latter back in those days and enjoyed the food immensely and polished service without pretense.

He left New York City (save for his upstate in Saratoga, a steakhouse called Salt & Char) to start his restaurants in Hong Kong and in Shanghai. So when there’s a potential opportunity to experience again the food or at least taste the brilliance of his food (via his team) and philosophy, I can’t resist.

Cafe Gray Deluxe Shanghai is located on the third floor at The Middle House hotel. When you enter the hotel’s lobby you can’t help but stare at that spectacularly enormous and beautiful chandelier for a few moments then proceed to the elevators and head up to the dark and handsome restaurant. This restaurant is huge given it is broken up to sections: a plush library-like seating for afternoon tea and private events at night, outdoor balcony seating, and dining areas that were broken up into three areas – two have a glimpse of the semi-open kitchen and one is semi-private that has a view of the outdoor space and a wall of the refrigerated wine room.

After we ordered our drinks and meal, shortly a medium-sized wooden box carrying three very warm demi baguettes and a spiced yogurt olive oil dipping sauce were served to us. These little baguettes I could have easily polished off but I had to resist.

For drinks, the non-alcoholic Swire Punch is like a non-boozy version of a piña colada and also the sweetness was balanced. It’s made of passion fruit, coconut, lime and pineapple and topped with a dried pineapple slice. The Opposite is made of Four Pillars Rare dry gin, recycled orange and honey shrub, yuzu marmalade, aquafaba, recycled coffee grounds bitters, recycled jasmine tea powder. It’s quite innovative for the (award winning) bar to reuse ingredients and make them taste delicious. It drank like a very smooth sour and it’s vegan friendly since the bar replaced egg whites with aquafaba.

For an appetizer, the jumbo crab tartar with caviar was exquisite. Sweet crab meat and very savory, seafood flavors in the gelee with the slightly nutty and briny caviar. It was even better with the seaweed crisps served on the side.

For a large dish that could have easily feed four people is the seafood stew. It’s a take on the cioppino but make it luxurious. This stew is heavily filled with large shrimp, scallops, fresh baby abalones, clams, and New Zealand mussels. The broth is wonderfully spicy, aromatic of seafood and root vegetables like fennel and celery, and incredible depth of seafood flavors. Each of the seafood items were cooked perfectly.

Since I was curious and craving seafood that night, I ordered the seafood Wellington. I have always known and eaten the beef version so I wanted to know what is the seafood version. Firstly, this Wellington can easily feed four. Secondly, this Wellington was delicious and unique for layering the different fish and shellfish together. The puff pastry was done beautifully – baked to a deep golden brown and thick enough to hold all of the proteins together. The filling were layers of salmon, halibut, shrimp, and whole baby abalones bound together with a lightly spiced tomato based sauce. It works and surprised that it all of these components managed to cook evenly.

Finishing our meal with desserts, we had the matcha tiramisu with a side of coconut ice cream and a chocolate nougat bar with coffee ice cream and cassis compote. The tiramsiu was good though not enough matcha flavor. The coconut ice cream was sublime. The chocolate nougat bar was classic and tasted lovely. I really enjoyed the coffee ice cream the most of the three components. What surprised me was the mignardes that came at the very end of the meal – mini pecan cheesecake bars (or I should say bites?). They were luscious, flavorful (spices, touch of maple sweetness) and nutty. I would have eaten a whole bar instead of the two desserts I’ve ordered frankly.

Overall, this dinner was very, very good. It’s luxurious takes on familiar European dishes. The dishes were cooked beautifully and the ingredients were very fresh and of high quality. The service was professional yet friendly. I wish Mr. Kunz is willing to reopen a restaurant in Manhattan since it made me miss his food all over again.