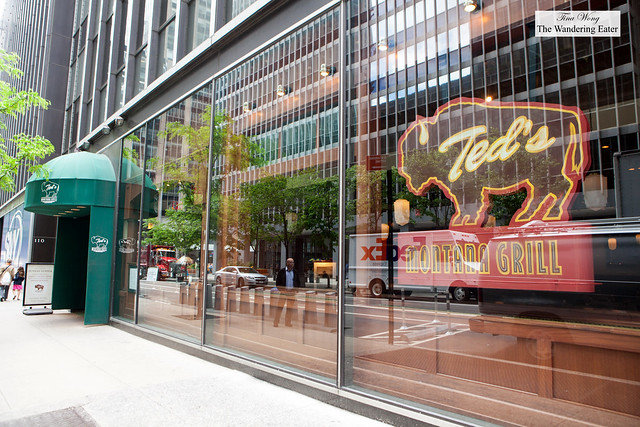 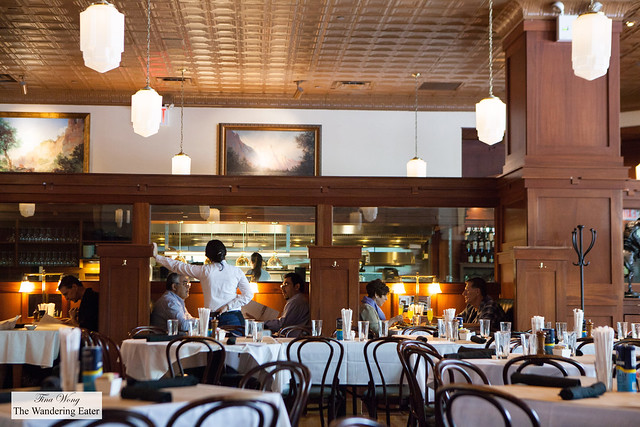 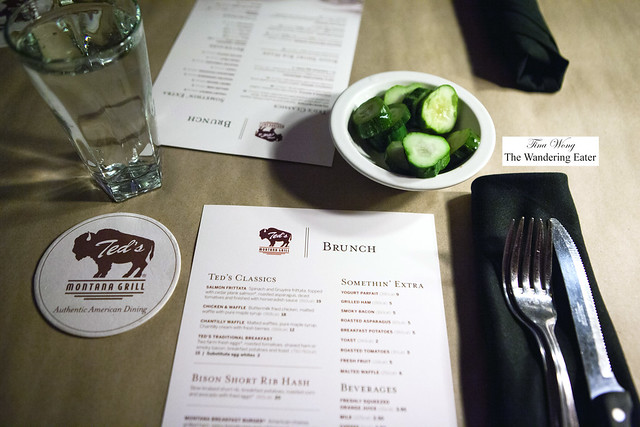 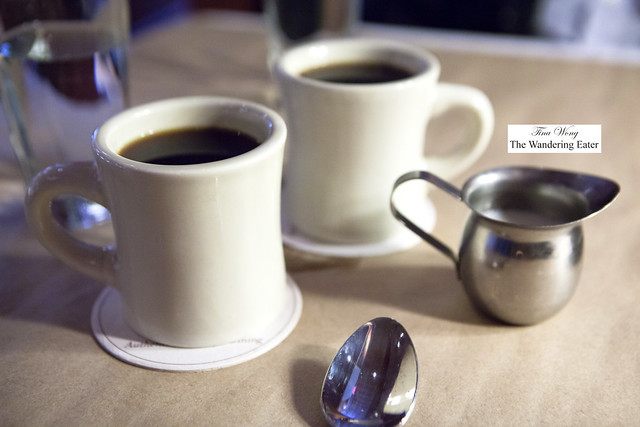 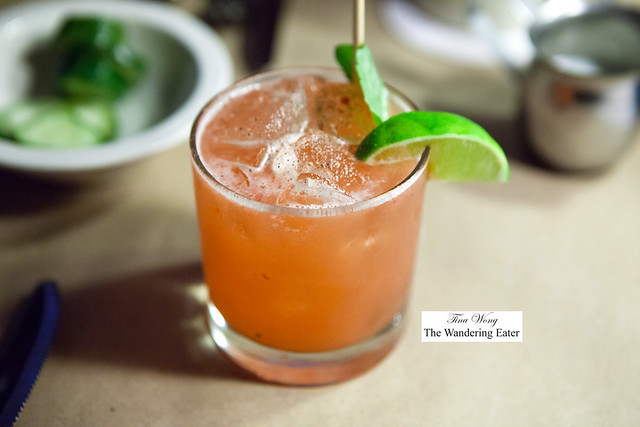 Photos from top to bottom: Exterior; Interior; brunch menus; mugs of coffee and the Shindig cocktail

A few weeks ago, a friend and I had brunch at Ted Montana’s Grill not too far from Rockefeller Plaza. Brunch in Midtown is mostly mediocre that no one really searches for it around this neighborhood however, after eating a couple of dishes at Ted’s, this might make me reconsider, especially when I have out of town visitors who want to stick around here for brunch.

Ted Montana’s is a restaurant franchise that started in Columbus, Ohio by Ted Turner and George McKerrow Jr. The concept behind these restaurants is the love of Montana and hearty food and celebrating bison as a delicious protein. The restaurant looks and feels like a casual steakhouse with the mix of dark wood and white walls, tables covered in white tablecloths and spacious booth seating.

My friend and I started out with mugs of decent coffee and a Shindig cocktail that tasted oddly savory (it shouldn’t when it’s supposed to be made of gin, strawberries and mint). 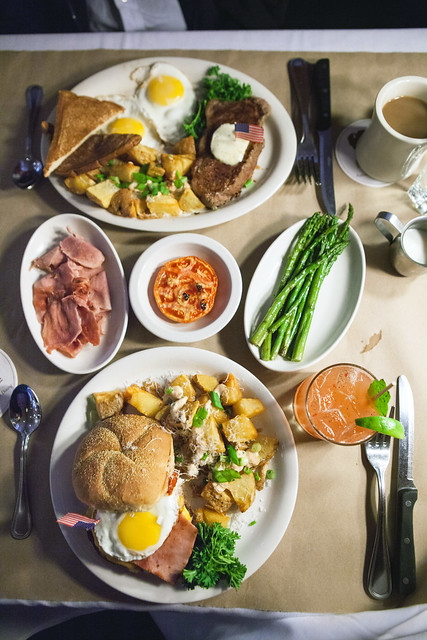 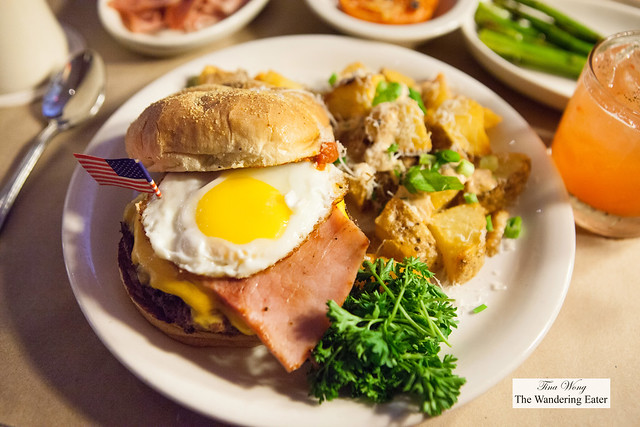 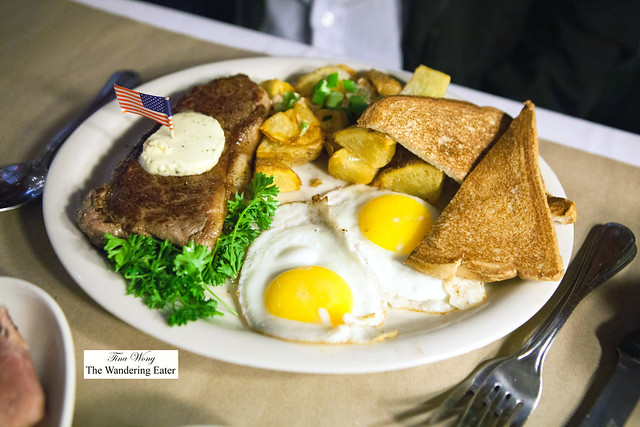 The Montana Breakfast Bison Burger is a bison burger topped with American cheese, grilled ham, spicy tomato jam and a fried egg, served on the side with breakfast potatoes was very good and hearty. A burger that was cooked to a medium side of medium-rare (not my particular preference) but it was still moist. Bison is a lean, red meat but it’s still juicy and the yolky fried egg gilded the lily for the burger.

The best part though were the breakfast potatoes that were served on all of the dishes, including the burger. First baked to dry out the cubed, skin-on potatoes and then deep fried to a delicious golden brown exterior and seasoned well. I wouldn’t mind having a large bucket of these and snack on them in front of the TV or when I am watching a movie.

The Bison Steak & Eggs were grilled to a perfect medium-rare and like the burger, it’s juicy and flavorful. The two sunny side eggs were delicious and the potatoes were addictive, as mentioned above. 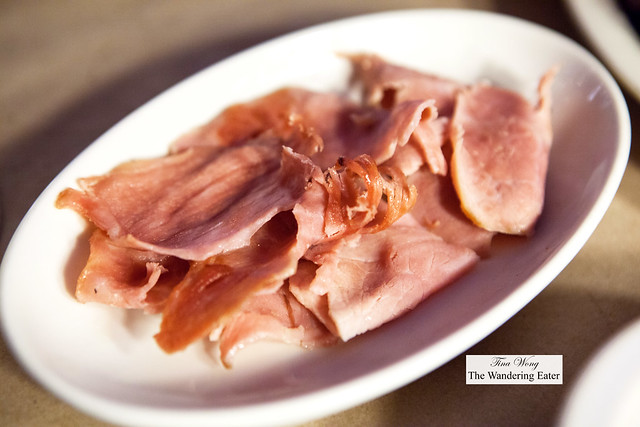 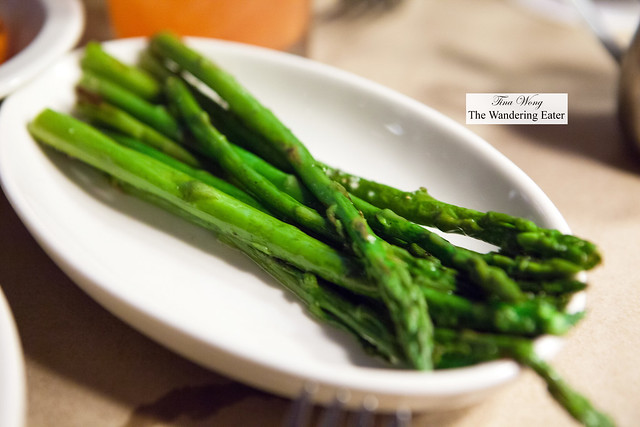 We tried to balance the meal out by having some vegetables, hence the order of roasted asparagus that were cooked very nicely that it still retained its crispness and take in a hint of smoky flavor. The grilled sliced ham were thin shavings of ham slices that were seared up nicely. Not too salty and had a gentle sweetness and smoky flavor from the grilling. 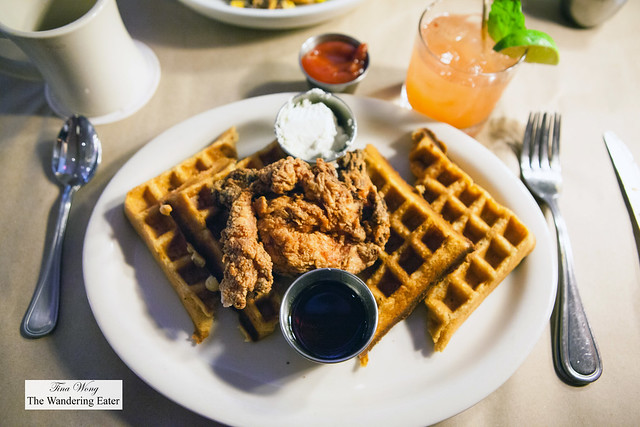 We had chicken and waffles that was not bad. The waffles could have been more crispier though it did have a nice malted flavor and it was wonderfully fluffy. The fried chicken could take in more seasoning (both salt and maybe make it spicy). 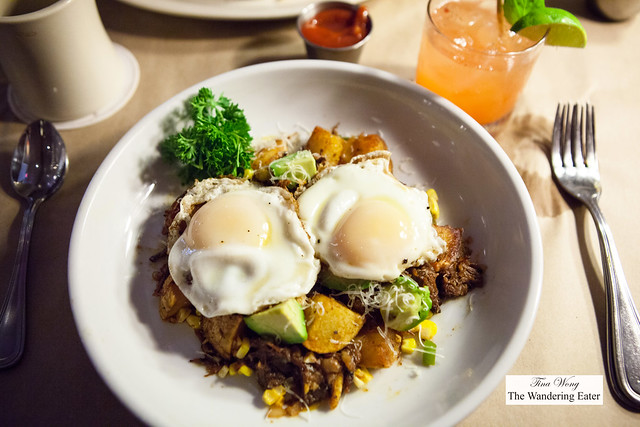 The best dish was actually our last dish we had, the bison shortrib hash. It was perfect and hearty in every way possible. The shortrib was skillfully braised so it’s tender and supple. The addictive potatoes were in the mix of this delicious hash. The large chunks of creamy avocado and sweet corn kernels added a vegetal sweetness that I adore. The two fried eggs on top made sure you will be leaving full and it made sense for this over-the-top hash.

The food here is hearty and very tasty. Service is friendly but a touch on the slow side. I might consider to stick with the typical Mimosa, Bellini or Bloody Mary next time if I were to order a cocktail. Otherwise, this is a hidden gem for brunch in Midtown West, especially near a very touristy area of New York City.

To view more photos of this event, please CLICK HERE or view the gallery below: