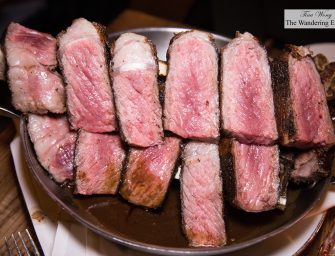 AmeliAmelié – Grey Goose vodka, maraschino, rosé brut, pomegranate, lime & rose water My friend and I revisited Boucherie in Union Square recently as we were craving steak with a classic French bistro atmosphere and fare. The slight justification to have a substantial steak is the fact it’s one of the incredibly freezing sub-zero nights in New York City. We started off with a floral Amelié cocktail made with Grey Goose vodka, maraschino, rosé brut, pomegranate, lime and rose water (quite appropriate for Valentine’s Day, thinking in retrospect) and I had the classic Boulevardier that is both strong yet sweet enough to.. 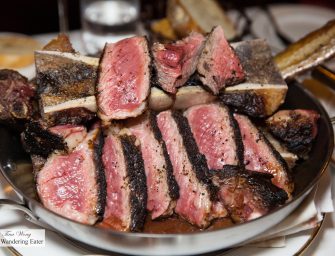 Earlier last week, the French steakhouse bistro Boucherie opened a new location in Gramercy. If you ever stopped by their original location in the West Village, it’s a similar look and feel. The yellow, dim lights that reminds me of a romantic Parisian bistro but this place has a charcuterie counter right off the entrance of the new location. The cocktails were strong and the drinks are created by head bartender Anthony Bohlinger formerly of Maison Premiere. The Birds of Paradise, a tall drink made of Beefeater gin, Sotol, Bigallete thyme, fennel, beet, lemon and egg white that isn’t sweet..

I love the Grand Central station for its gorgeous architectural elements and well, it’s one of the major transportation hubs in New York City. I admit, during the holiday season I tend to shop around the area since there’s Saks and Bergdorfs and many of other beautiful stores to shop in Midtown. Michael Jordan’s Steakhouse is a very good option for a holiday shopping break and the best part is the view of the architectural marvel. (more…) 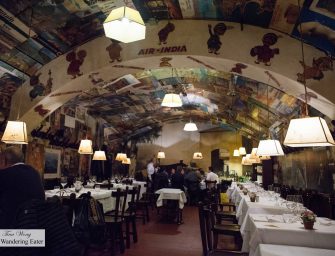 If you have read anything about Florence’s cuisine, it’s a city that takes immense pride for its locally raised beef and eating it. Buca Lapi is one of the oldest restaurants in Florence and serves a fantastic steak. When you enter the subterranean restaurant, you’d see the open kitchen with immense sides of Chianina beef, This restaurant is part of the winery, which is located in Palazzo Antinori, the Renaissance palace that has been the winery’s home since the 1500s. What I adore about this restaurant is its unpretentious and friendly attitude on top of the fact their food is.. 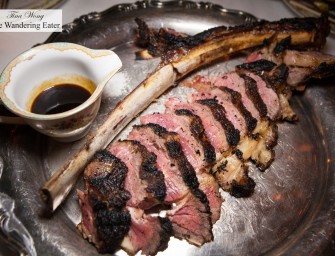 Seven Beef is the newest restaurant by Chef-Owner Eric Banh and his sister, Sophie and with Executive Chef Scott Emerick helm the kitchen. Seven Beef occupies a 4,000-square-foot building that once housed an architect’s office. The centerpiece is the dramatic open kitchen equipped with a wood-burning oven alongside a combi-convection oven. What you don’t see is the cooler in the back that houses the restaurant’s sub-primal cuts of prime, grass-fed beef, delivered weekly by Heritage Meats from their ranch in Rochester, Washington and have a young butcher to break down the animal everyday. (They will cut a three pound, bone-in..
eating outManhattan

On Christmas Eve, my family and I headed to Ben & Jack’s Steakhouse for this holiday. In a city with many options for steak, Ben & Jack’s serves the one of finest steaks and seafood at their dining destinations. Ben & Jack’s steaks are all USDA prime and dry-aged on the premises. When we started our drinks ranging from well made drinks for my mother and brother, a fruity and sweet Brazilian Cosmopolitan and clean and refreshing margarita, respectively. I had the bold, delicious Pinot Noir from Robert Mondavi for my upcoming rib eye steak and my father wanted a..
eating outManhattan

When chef Arturo McLeod left for midtown Manhattan after two decades at Peter Luger’s, he was thinking big when he opened Benjamin Steakhouse in 2006. A grand, soaring double-height with a high ceiling, brass chandeliers and rich brown leather on the seats inside the Dylan Hotel. Portions also come big, of course, with hefty cuts of prime rib eye, filet mignon, and New York sirloin, plus porterhouse prepared Luger-style for two, three, or four. The beef is dry-aged for at least 28 days in the house’s special aging box. The steak comes lightly seared, its subtle savory seasoning the perfect..

Photos from top to bottom: Exterior; Interior; brunch menus; mugs of coffee and the Shindig cocktail A few weeks ago, a friend and I had brunch at Ted Montana’s Grill not too far from Rockefeller Plaza. Brunch in Midtown is mostly mediocre that no one really searches for it around this neighborhood however, after eating a couple of dishes at Ted’s, this might make me reconsider, especially when I have out of town visitors who want to stick around here for brunch. Ted Montana’s is a restaurant franchise that started in Columbus, Ohio by Ted Turner and George McKerrow Jr...
eating out

Bobby Van’s Steakhouse: Table setting and Interior of dining room Bobby Van opened his first restaurant in Bridgehampton, New York, in the summer of 1969, where he tended bar and played piano. The restaurant quickly became famous with local musicians, writers, poets, and artists. Bobby Van’s legacy of quality food, service, and atmosphere quickly grew into a thriving year round restaurant in the Hamptons. Eventually after 20 years, Bobby would lose interest in running a restaurant and he sold his business to four Manhattan restaurateurs; Joseph Smith, Joe Phair, Rick Passarelli, and Joe Hickey. The new operators soon opened a..