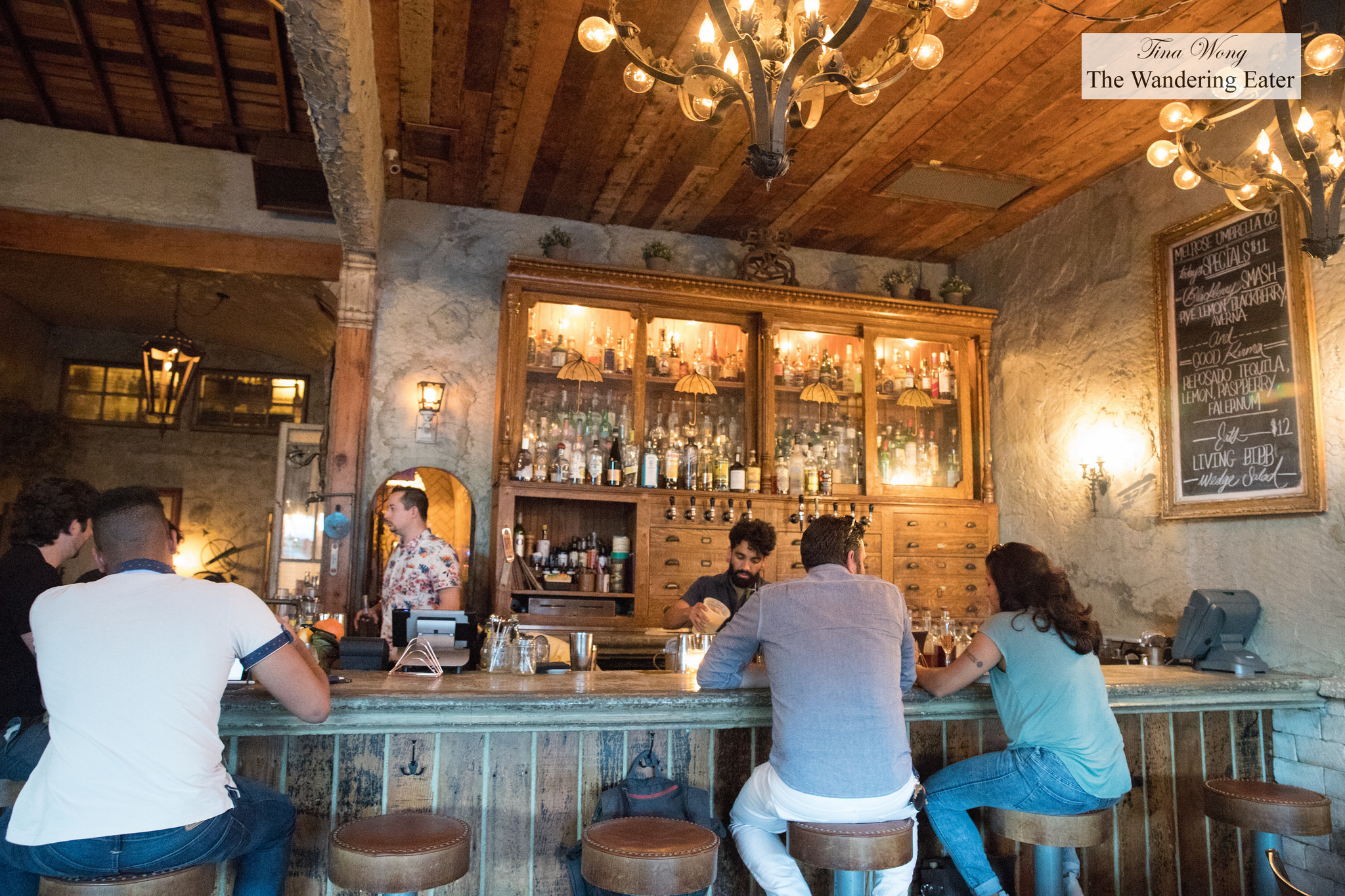 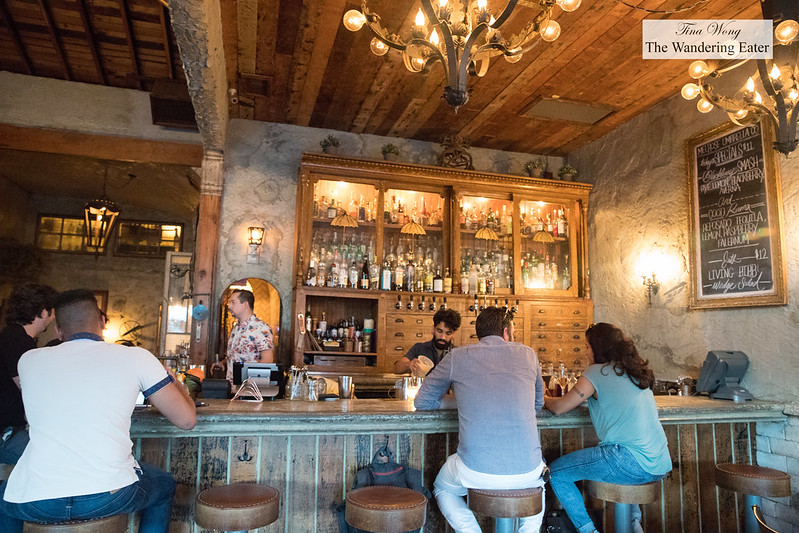 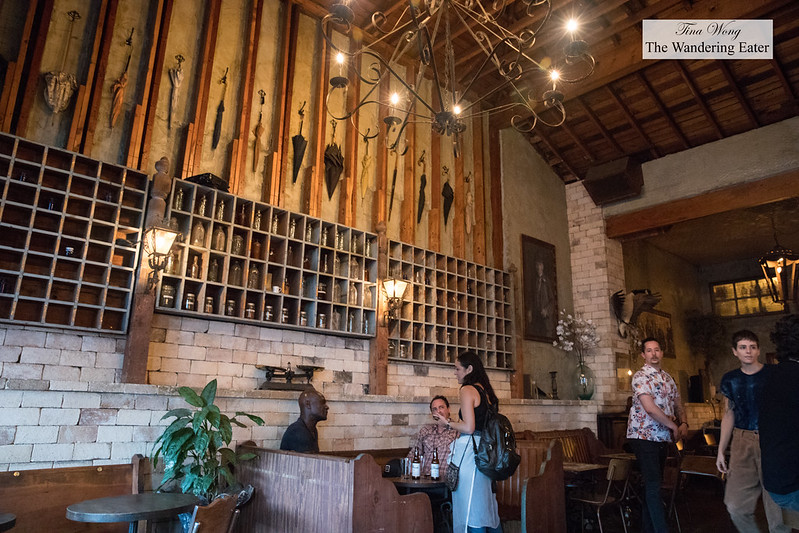 When I came across and visited Melrose Umbrella Company, I thought this is not the typical cocktail bar and in ways, it isn’t. At first glance, I was presuming it’s a hipster bar that would care a lot about their drinks (which they do) and have this standoff-ish demeanor that some bars’ staff might carry out (which they don’t). When you enter this spacious place, it feels like a step in time circa 1920s with exposed wooden beams and vintage umbrellas tucked in between the panels of the wall. It feels cozy and historically cool without trying too hard. The staff is friendly and knows what they are serving in both beverages and food. 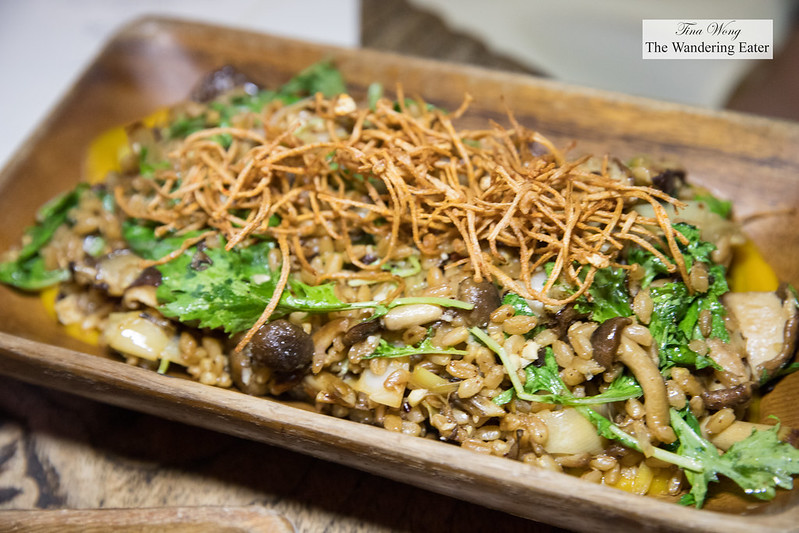 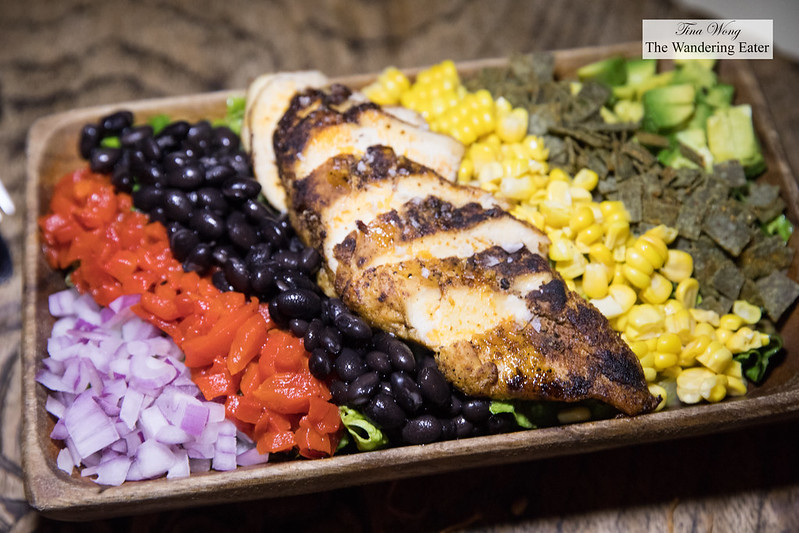 When you go to a bar, you don’t expect to see salads at all. Even if they do serve it, a vast majority of them suck. However, Chef David Lespron and his team made surprisingly good salads. The two we had that evening were the vegetarian friendly warm mushroom salad and the SXSW salad. The former was incredibly delicious that it’s hearty and vegetarian friendly since the five different mushrooms replaced the meat by flavor and texture. Frankly, if I had this for lunch or dinner I would have this almost everyday. The SXSW salad was very good too and what makes it so appealing was the serrano lime vinaigrette that its acidity didn’t feel like we’re weighed down even though this salad is substantial with the grilled chicken breast and various beans and vegetables. 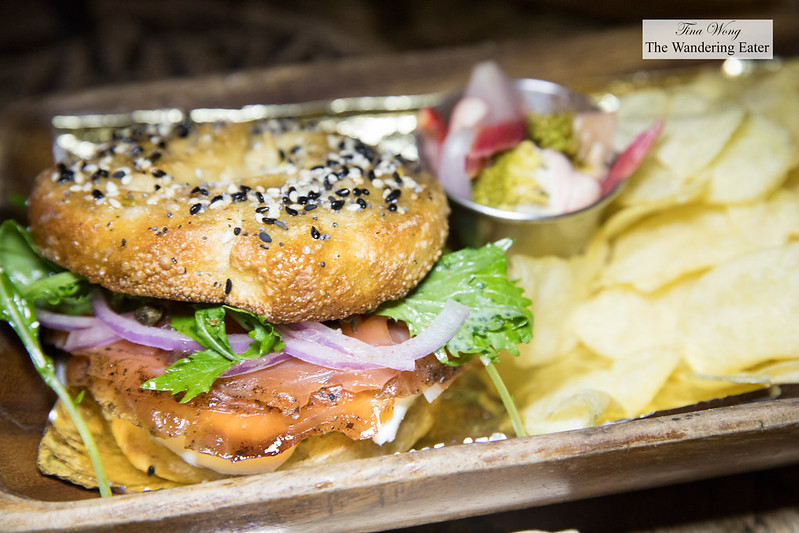 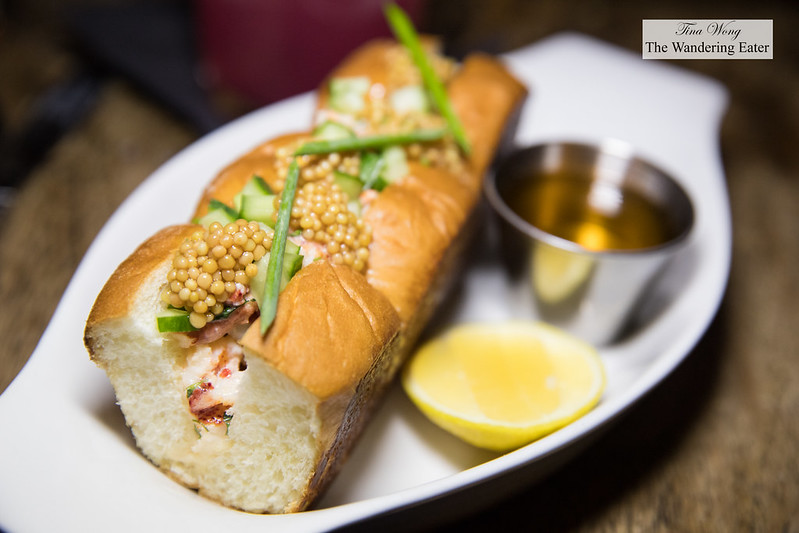 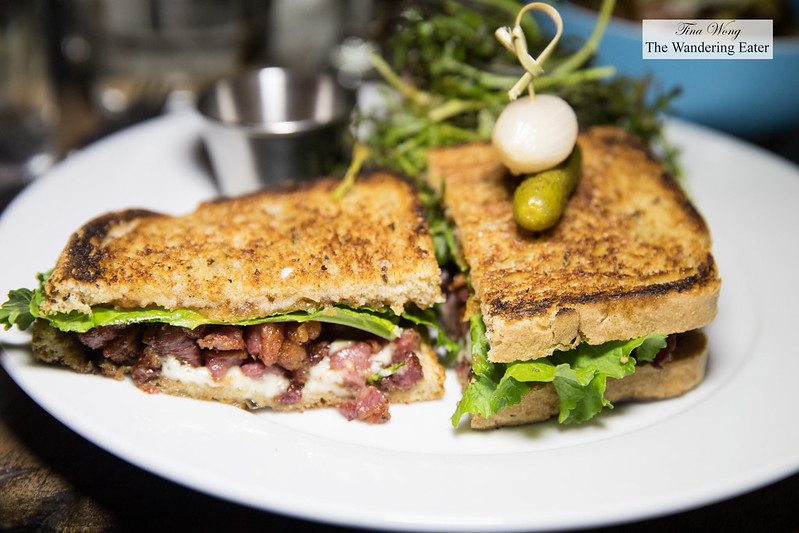 There are sandwiches and one of the most unexpected thing to hear from a chef based in Los Angeles is that he misses bagels. Bagels aren’t a thing in the paleo, keto, juice loving city (though ironically this city does love doughnuts). The chef David lived in NYC for several years and missed eating bagels and he made his own bagels to fulfill that craving. Hence the reason why he is serving the bagel and lox lunchbox. This bar is a daytime cafe since they open at 10:00 AM. The bagel itself was a good version – it has the chew and it’s not too dense and I loved their lox. Almost reminds me of the classic lox and schmear (meaning, cream cheese). The lobster roll was very good. Maine lobster in a buttery, toasted roll with lobster butter on the side. The lamb belly BLT is a flavor bomb and the heartiest of the sandwiches we had. The lamb belly is cured briefly but it has so much flavor and it’s quite salty (in a good way) to wash it down with the delicately malty Scrimshaw Pilsner. 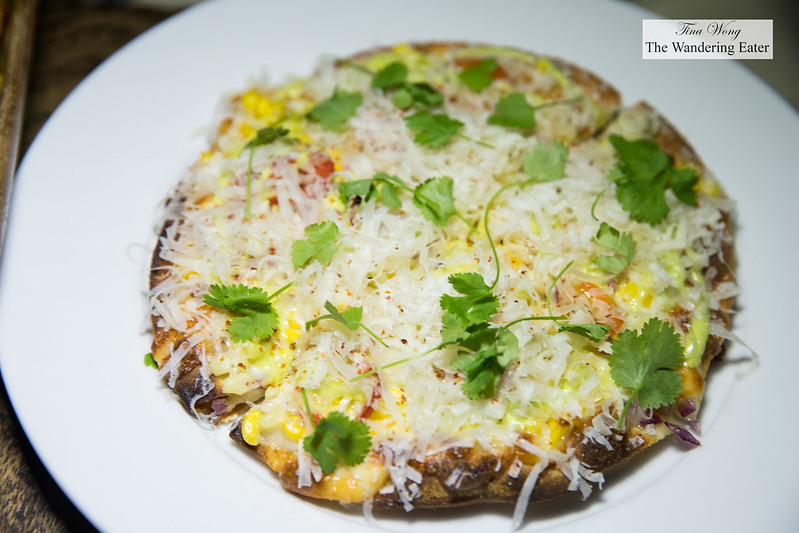 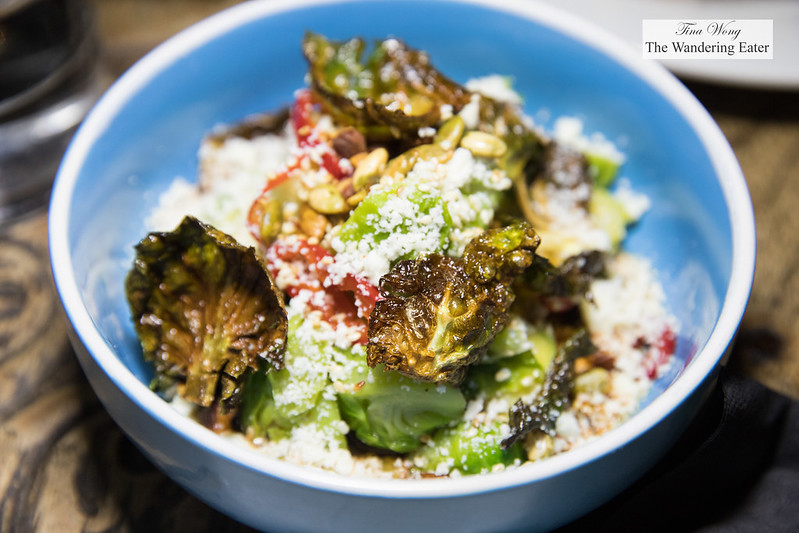 The elote flatbread and brussels sprouts aren’t sleepers either. The flatbread had sweet corn flavors with hits of salinity from the queso fresco and cilantro aioli. The brussels sprouts were not just fried but have both steamed and fried giving different flavors and textures in a bowl and it’s quite thoughtful for a dish that’s been done over thousands of times over. The mole sauce found in the bottom of the brussels sprouts added a warm depth of flavor that is a very nice change from the norm. 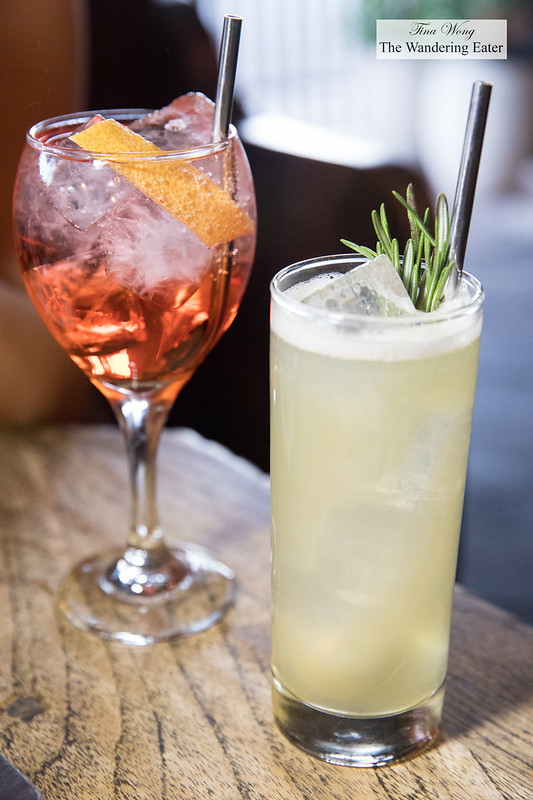 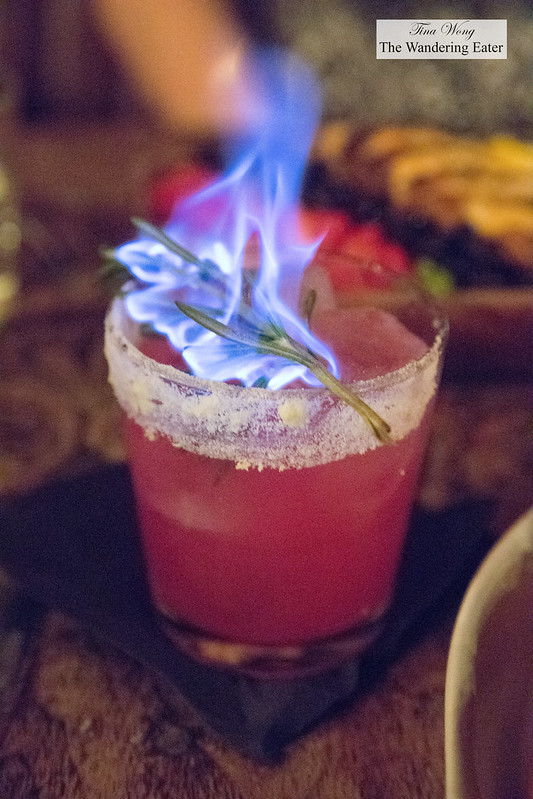 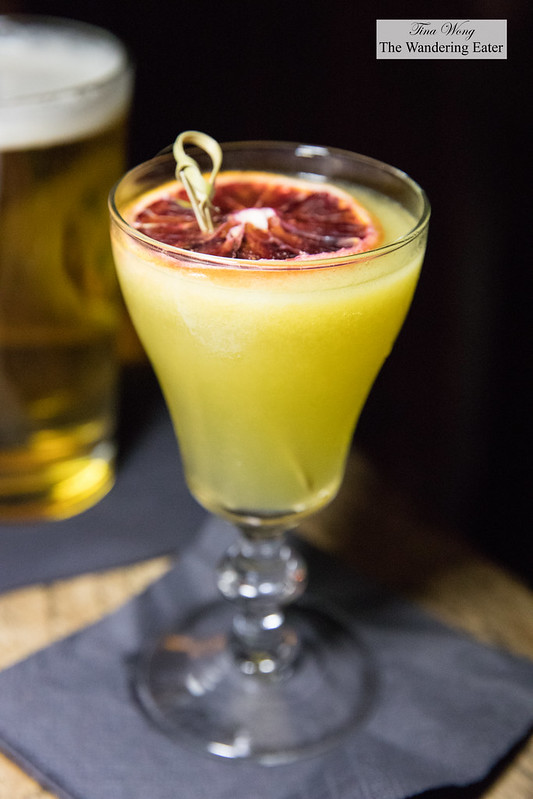 For the cocktails we had (all seen above), they were simply very good. Of the bunch, we really liked the Mezcali Me Banana. Not just because there’s a pyrotechnic element of the flamed rosemary but the drink itself was smoky, a touch sweet and the banana and prickly pear juice just comes through without being obnoxiously sweet. The Highway Hustle (the yellow cocktail) is beautiful to look at too but it got spunk from the fresno pepper infused tequila and funkiness from the pineapple infused caraway liqueur.

Overall, it’s a great place to hangout over drinks and food at Melrose Umbrella Company. It feels like a nice neighborhood kind of bar that I wouldn’t mind coming to when I want a drink and just be – except I don’t live in LA.