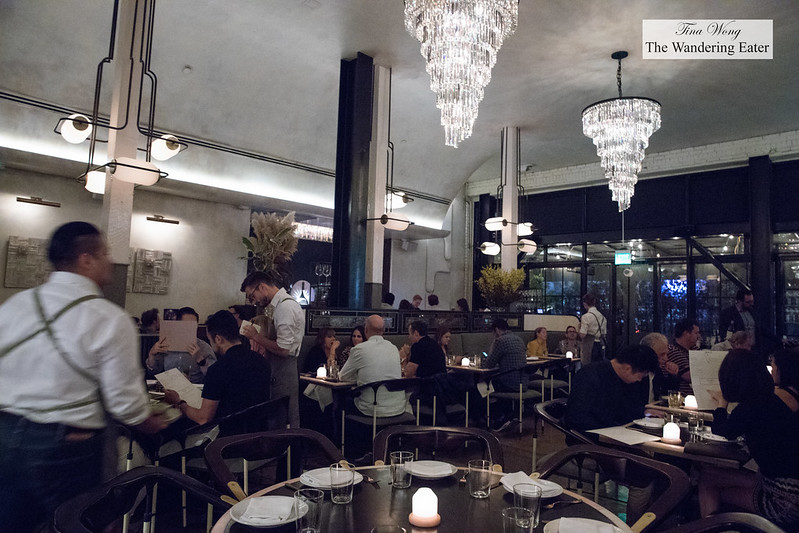 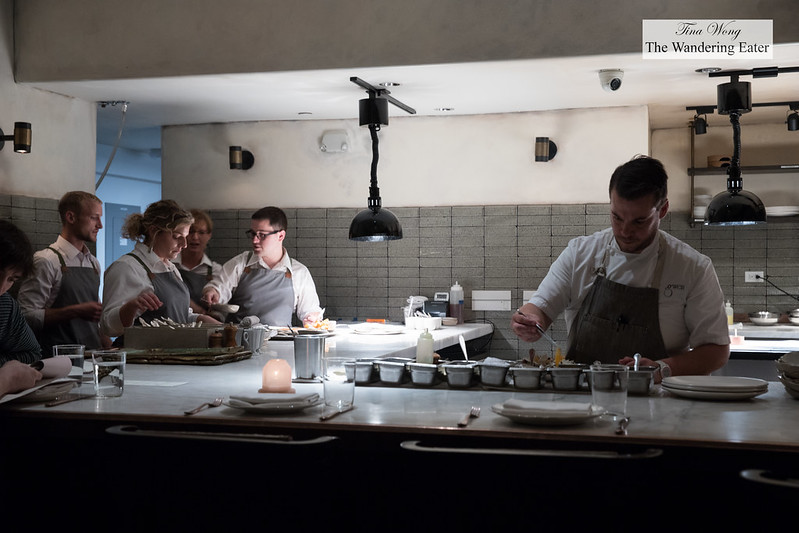 I’ve been to plenty of steakhouses (especially NYC is pretty much known as a steakhouse town) and the one that feels the most well-rounded I’ve been to as of recent is at Gwen. It’s kind of odd to say, for me at least, that a restaurant in Los Angeles would provide me a better experience both in service and in food that doesn’t feel brusque and the menu is uneven that the beef steaks shine but little else on the menu would be as good or notable. What is notable about Gwen is the fact the menu is meat-forward but they do have a few cooked seafood and pasta options to round out the menu and it is actually done well. Service is very good 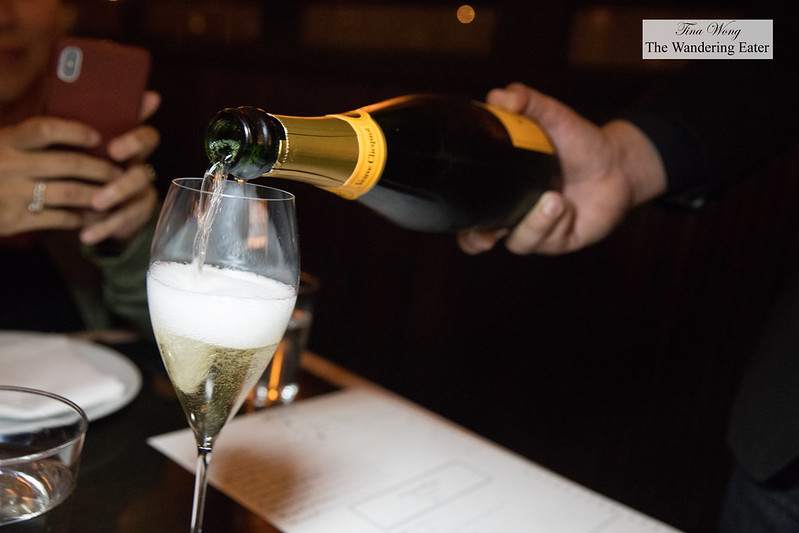 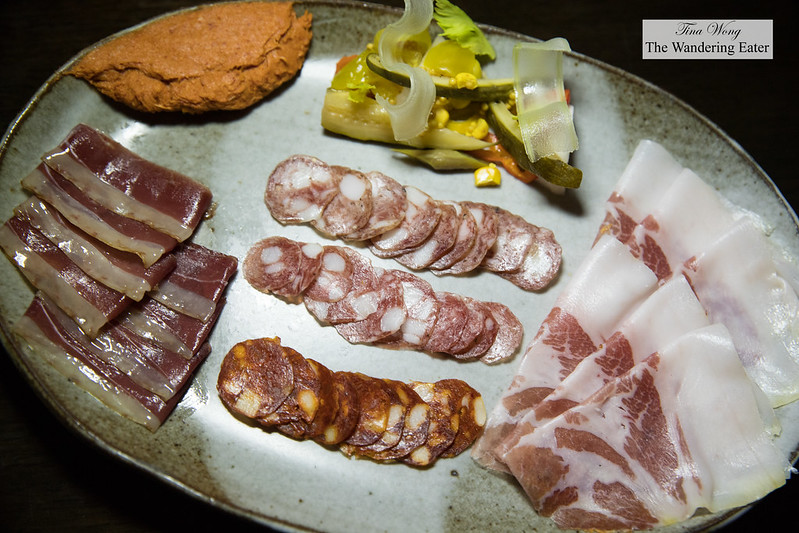 We started off with a delectable plate of house made charcuterie paired with a very reliable flute of Veuve Cliquot Champagne. The Champagne’s refined acidity and minerality cuts through the fat of each of the sliced meats. The duck speck, nduja, coppa seca, Spanish chorizo, Negroni salami, and fuet salami were all fantastic in its own right but the nduja was an addictive, mildly spicy meat butter that we can’t get enough of and the duck speck was special. 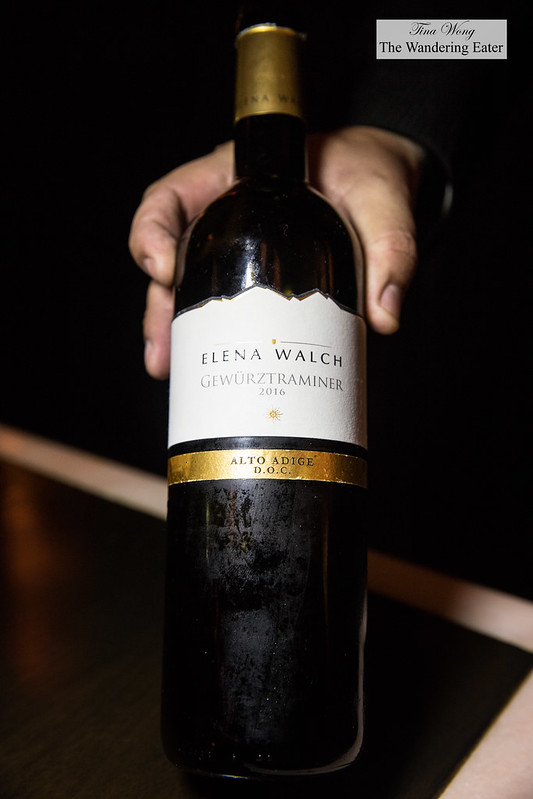 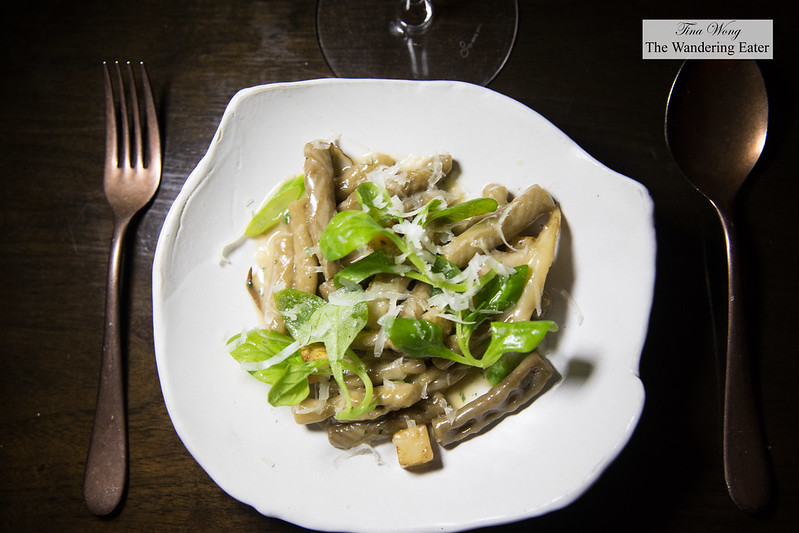 The pasta dish of strascinati, mushroom, roasted celeriac topped with shaved pecorino was simply comforting. The warm, al dente house made pasta was great with the slightly crisp roasted celeriac and the pecorino added a little salty, slightly funky punch to the dish. The pairing with the Elena Walch, Gewürtztraminer, Kastelaz, Alto-Adige, 2014 was interesting as it was aromatically sweet but it isn’t as sweet on the palate. Medium-bodied, fruit forward and works nicely with the pasta. 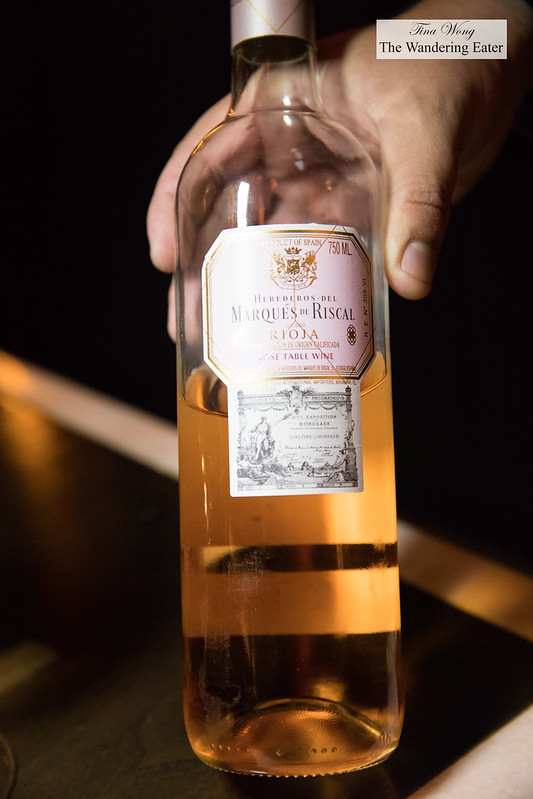 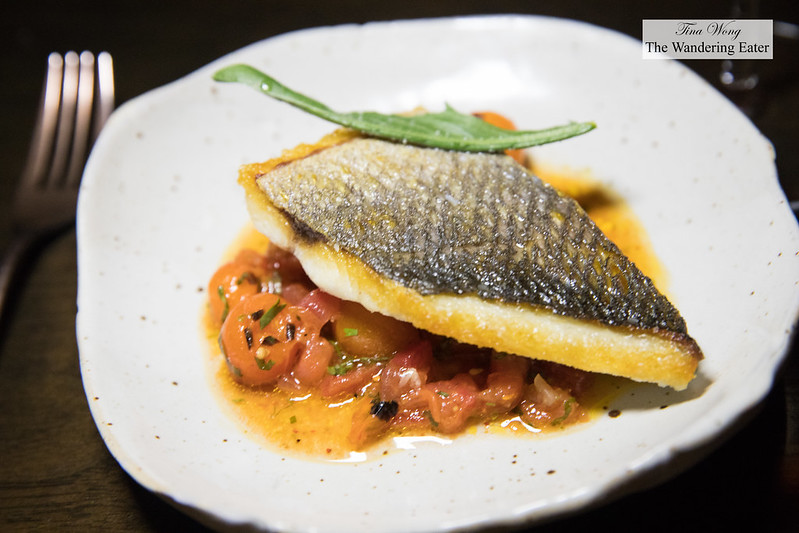 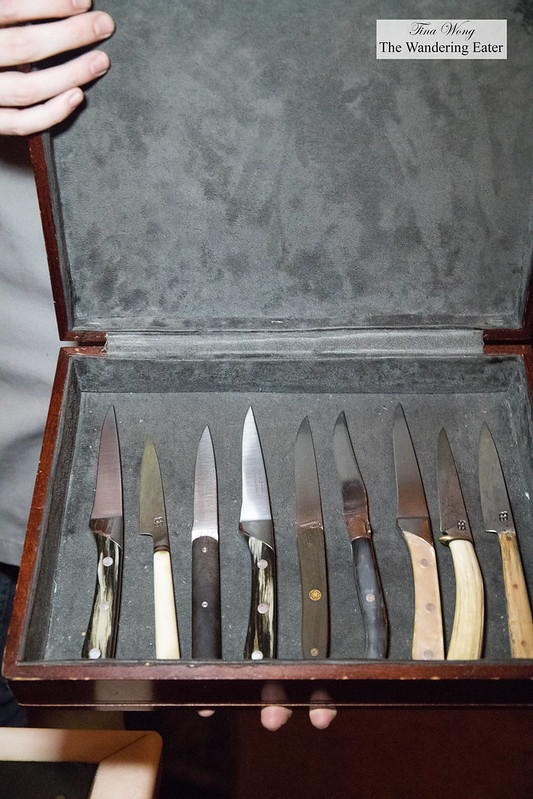 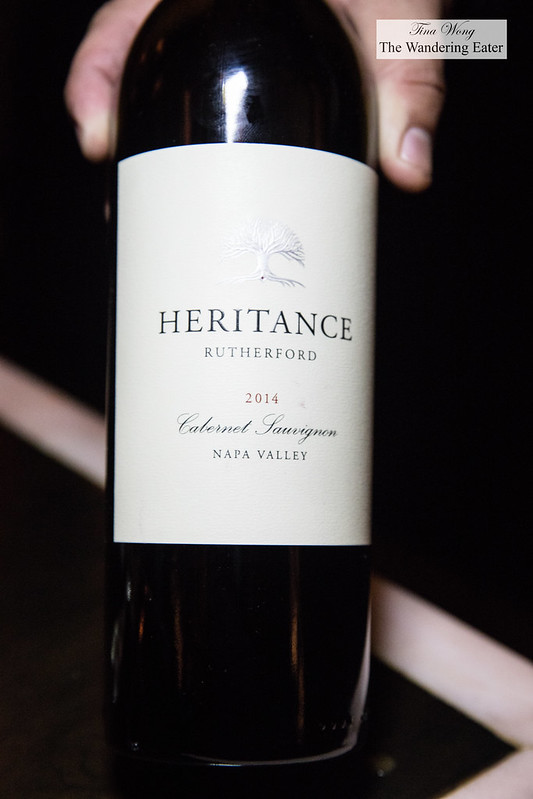 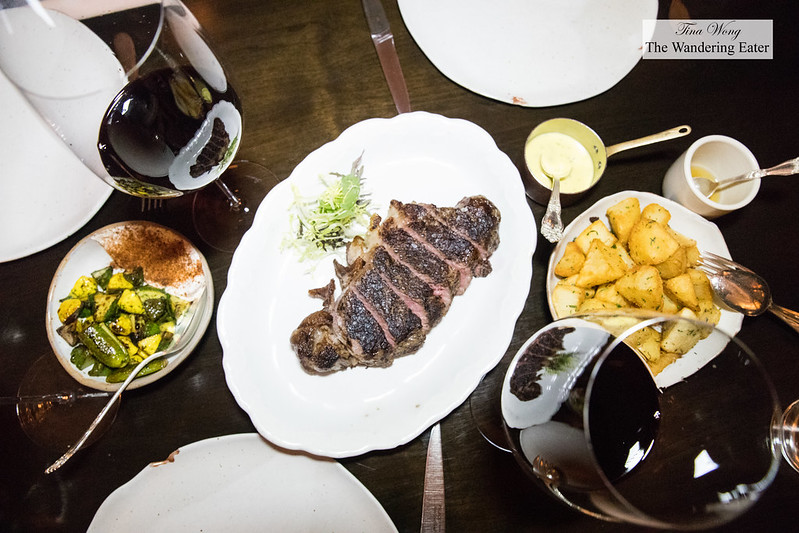 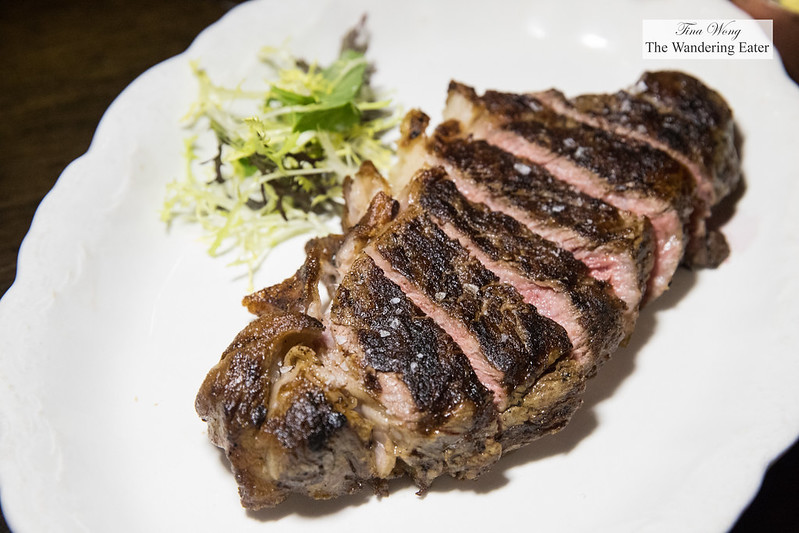 While we were waiting for the main protein of the evening – steak. Our waiter presented us a handsome wooden box filled with beautiful knives with each have its own distinctive handle and blade. What was really charming about this presentation was the fact there are short anecdotes for each knife, making it feel a little personalized even though you are using this knife for the steak course for the evening.

When our Creekstone New York strip steak arrived, we also had a side of duck fat fries and summer squash with spiced yogurt. The steak was sublime. Juicy and cooked to a perfect shade of medium-rare with nice char and good hit of salt. The duck fat fries were too easy to eat. Crispy exterior meets fluffy white potato and there’s definitely the delicate hint of duck flavor permeated these potatoes. It’s hard to stop eating them. The summer squash with spiced yogurt was a smart side dish as it doesn’t weigh the stomach down much further as the yogurt was wonderfully tart and a little bit of spiciness to give an extra wave of flavor to the vegetables.

The wine pairing for the strip steak was the Heritance Rutherford Cabernet Sauvignon 2014. This was the favorite since it works so easily with the beef for its intense and brooding aromas with hints of black currant, plum, cedar, and roasted coffee. 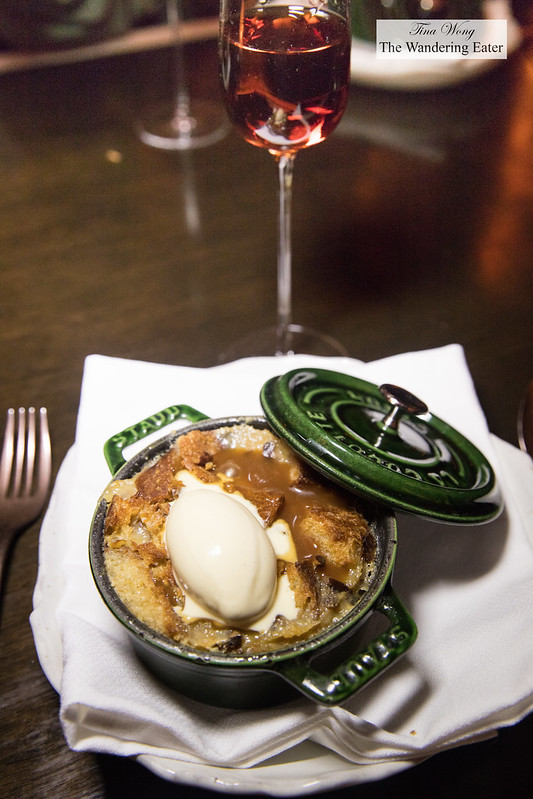 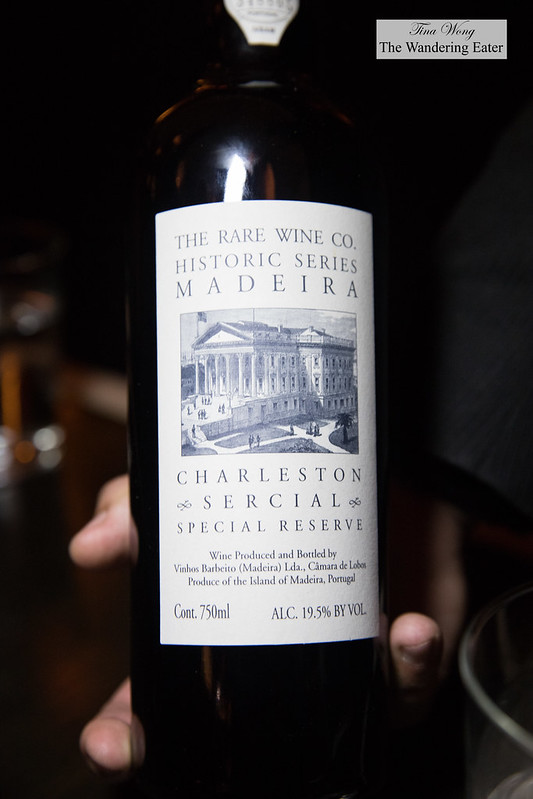 Our dessert course was bread pudding paired with Rare Wine Co. Historic Series Madeira Charleston Sercial Special Reserve. I tend to not care for bread pudding since I feel most of the time it lacks anything particularly special. However, I will make an exception for this one. The bread pudding was baked to a lovely crust on top meets with the custard-y middle that isn’t too sweet. What I really adored the most of this dessert was the house made vanilla ice cream. I know vanilla ice cream doesn’t sound like a special flavor but there’s something so special to have an excellent vanilla ice cream that has floral complexity from the good quality vanilla bean and the texture was creamy, luscious and no detectable ice crystals on the palate.

The Madeira that’s paired with the bread pudding was very good too and I am a sucker for excellent Madeira and vintage port wines since there is complexity beyond the initial sweetness. 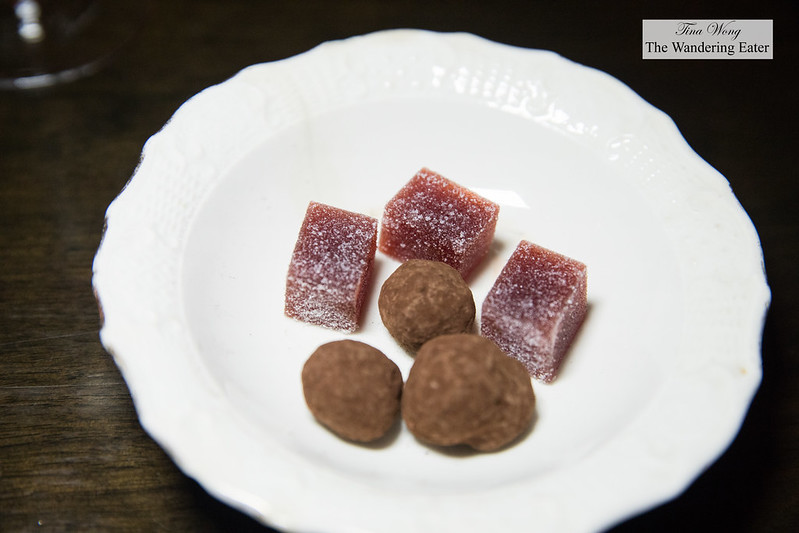 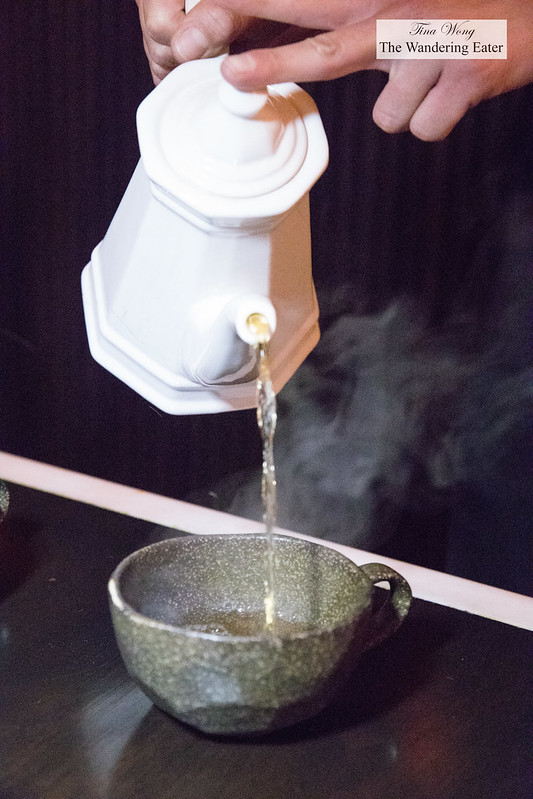 To end the evening, we had oolong tea. What surprises me was the fact the restaurant serves oolong tea and it isn’t the norm for most non-Asian restaurants. The tea was very good. We were also served a small plate of petit fours of chocolate almond truffle and raspberry pâte de fruit. It’s a wonderful dinner and the carnivores of my group were very satisfied. They also want to come back again soon since they live in Los Angeles. (I would definitely come back to Gwen but it isn’t as easy.)