Dinner at Le Bernardin with SPG 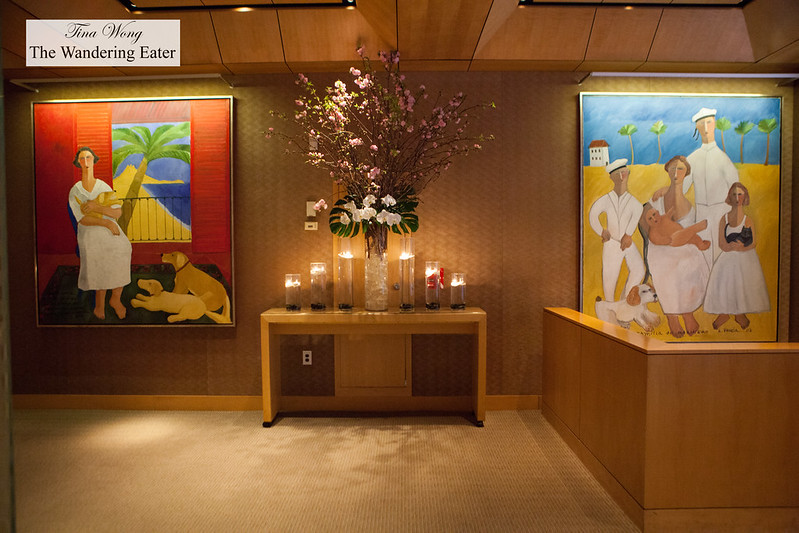 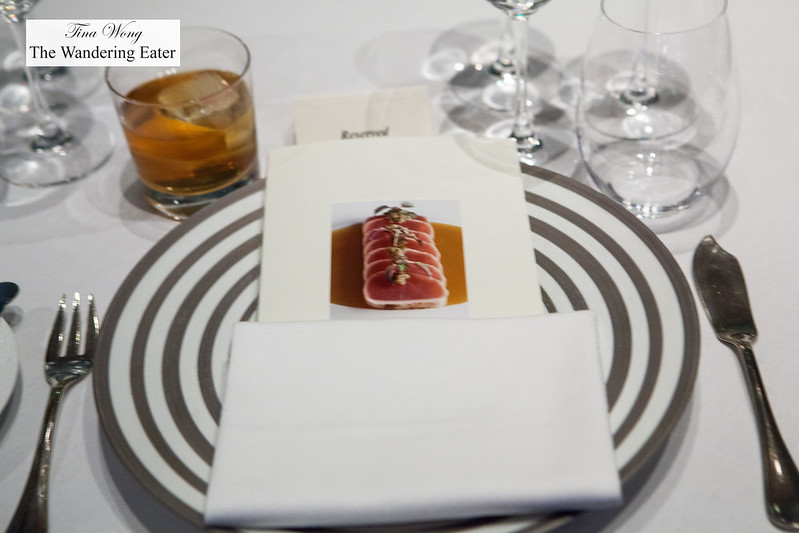 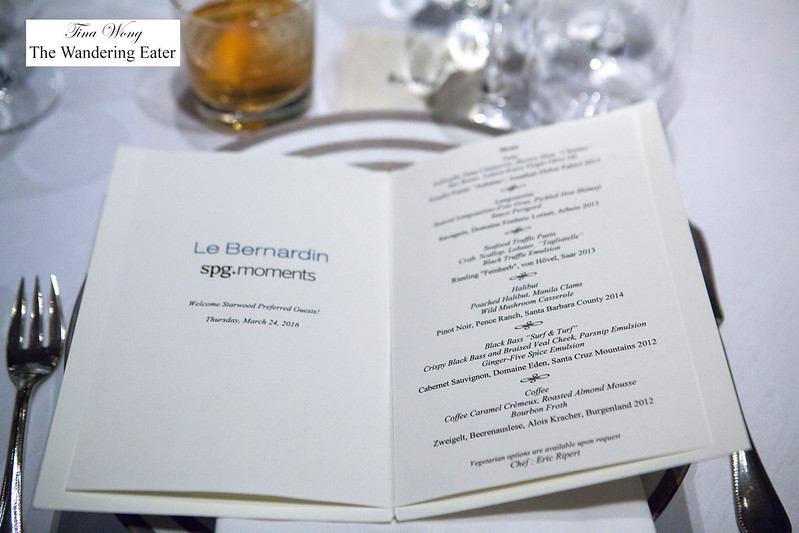 Coming relatively fresh from my trip to Amsterdam (I will talk about that trip in future posts), I was invited to one of the most coveted SPG Moments dinner at Le Bernardin! How couldn’t I be excited despite the fact I’m slightly jet lagged? Le Bernardin is a 3* Michelin rated restaurant since 2005 (not an easy task, mind you) and I get to mingle with the elite SPG members who can drop 100,000 points (it’s an equivalent to 10 free nights at the W Hotel in Montreal) for a spot for this dinner. 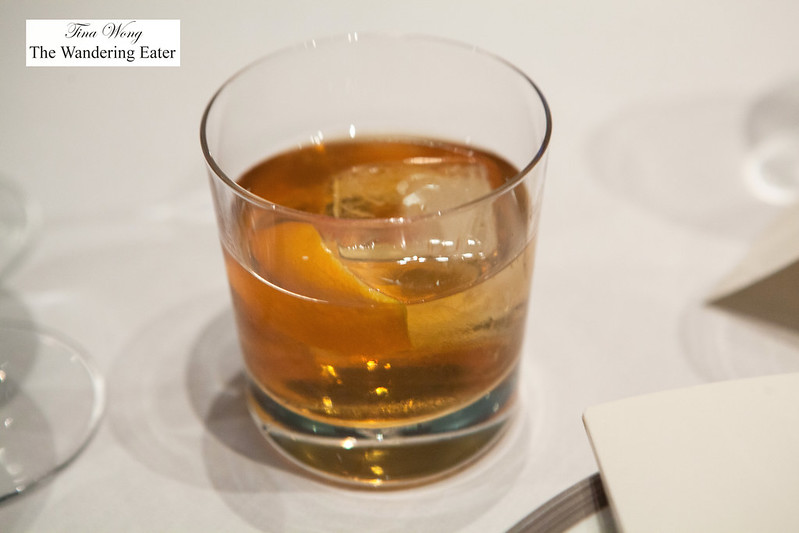 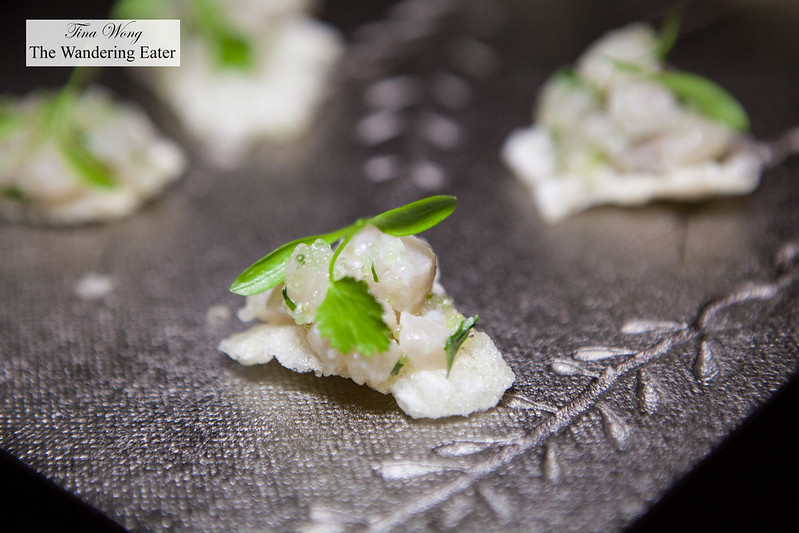 Since this is a private dinner, this group dined at the private dining area. This place still has the serene, luxurious feeling of the main dining area but much more intimate. Kicking off with cocktail hour, I opted for an old fashioned while fellow diners and my new friends opted for glasses of Champagne and the like. Hors d’oeuvres were passed around like hamachi flash marinated with gochujang sake vinaigrette on a puffed rice cracker, grilled steak topped with chimichurri, seared shrimp with chorizo and a couple of other wonderful bites. 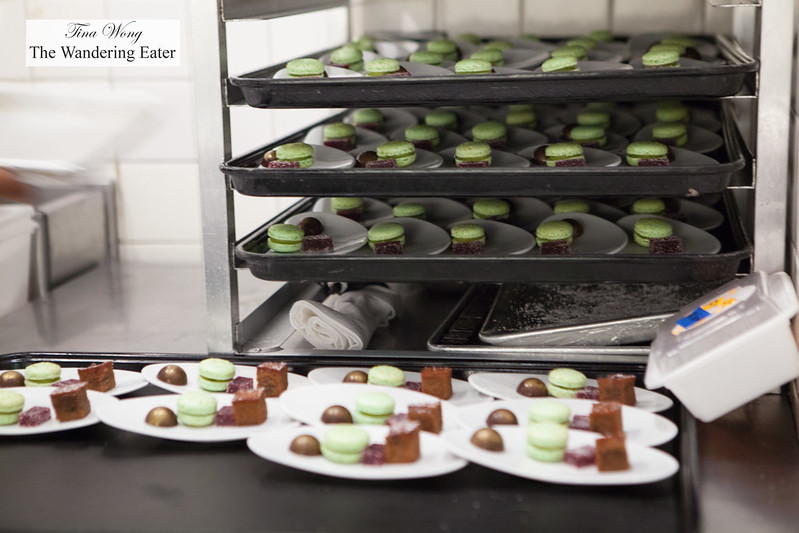 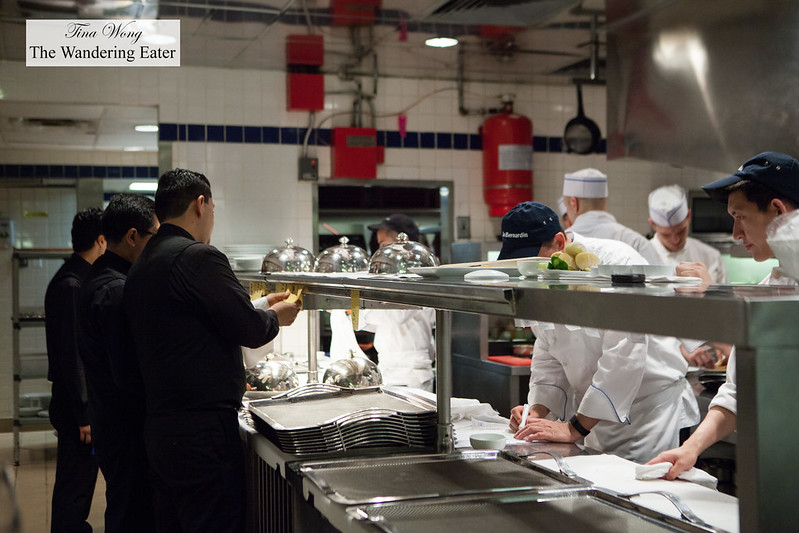 Chef Eric Ripert eventually made his presence and greeted all of us personally and invited us in groups of six to his very clean, tightly run kitchen. The long kitchen is is divided to separate areas for each specialization – the cold or raw fish dishes are prepared in one end, pastry team works next door and the largest space is devoted to the cooked food with a brigade of cooks, sous chefs and executive chef to keep everyone in line. Despite all of the activity in this massive place, it feels quite zen; no screaming, chaos or anything you’ve ever seen in those reality kitchen TV shows. 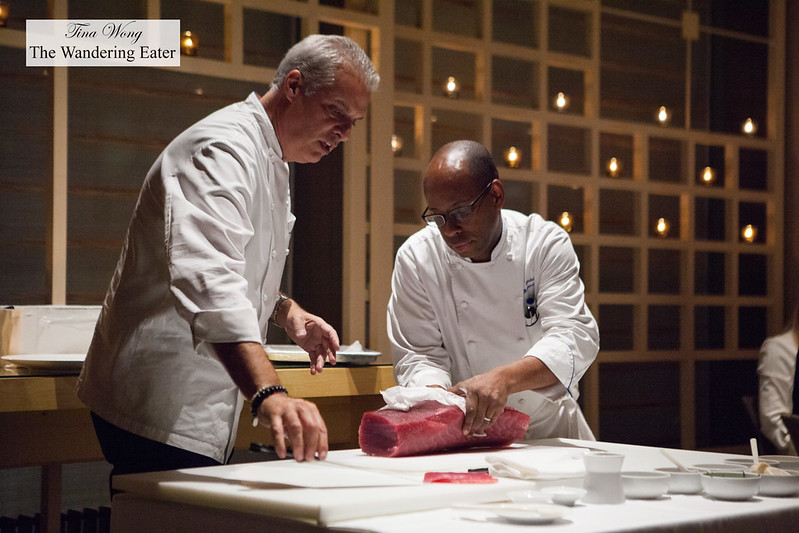 After the tour, Chef Ripert (assisted by his Executive Chef Eric Gestel) did a demonstration of the restaurant’s dish of tuna carpaccio (which we will be having shortly) and informed us how to choose the freshest fish at the market or fishmonger. This particular portion of the dinner is unheard of in any restaurant (especially to have a famous, elite chef to take his busy time to show us this) and this experience is definitely special. 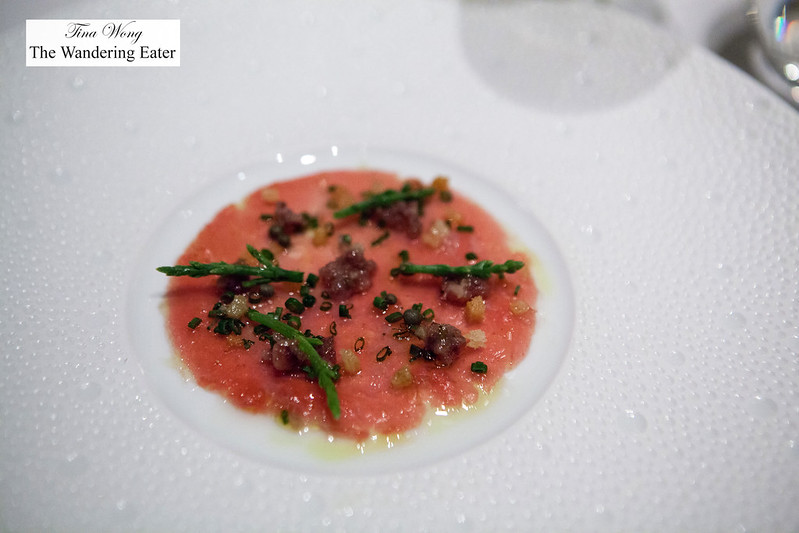 Not too far after the demo, we all were bestowed with the tuna carpaccio, Iberico ham “chutney,” sea beans, lemon-extra virgin olive oil. This was an incredible first course of silky tuna and the finely diced Iberico ham (the finest Spanish ham in the world) enhances the meatiness of the tuna. The crunchy, delicately briny sea beans added an extra layer of deliciousness. 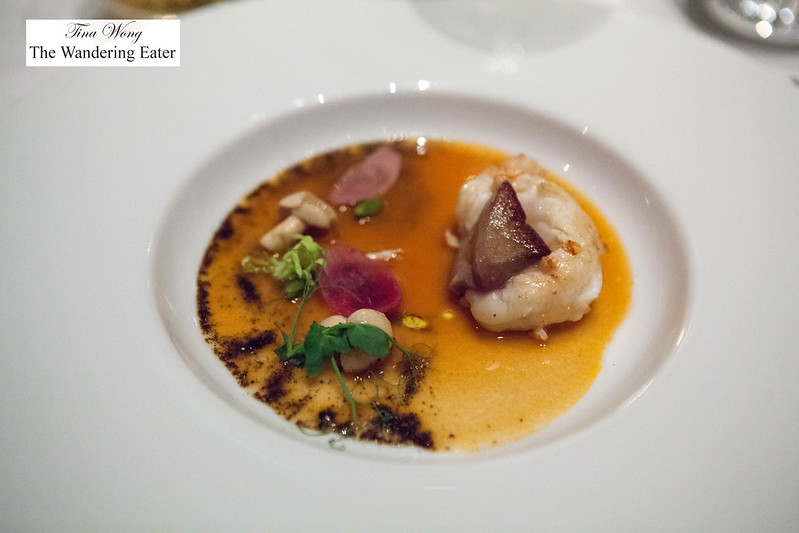 Langoustine, foie gras, pickled hon shimeji mushroom, and seafood broth was arguably the best dish of the evening. The langoustine was perfectly cooked and the wedge of foie gras was buttery and added a liver-y depth to the intense seafood broth. I wouldn’t have mind eating a bucket of this, especially that seafood broth. 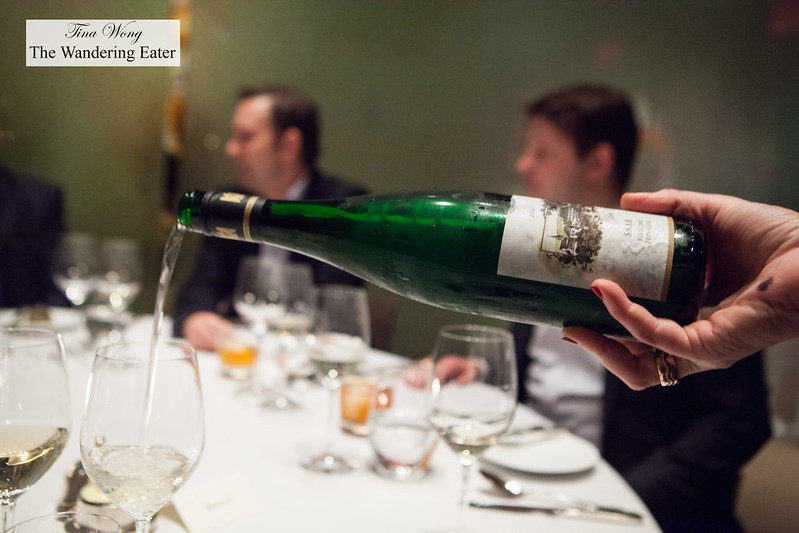 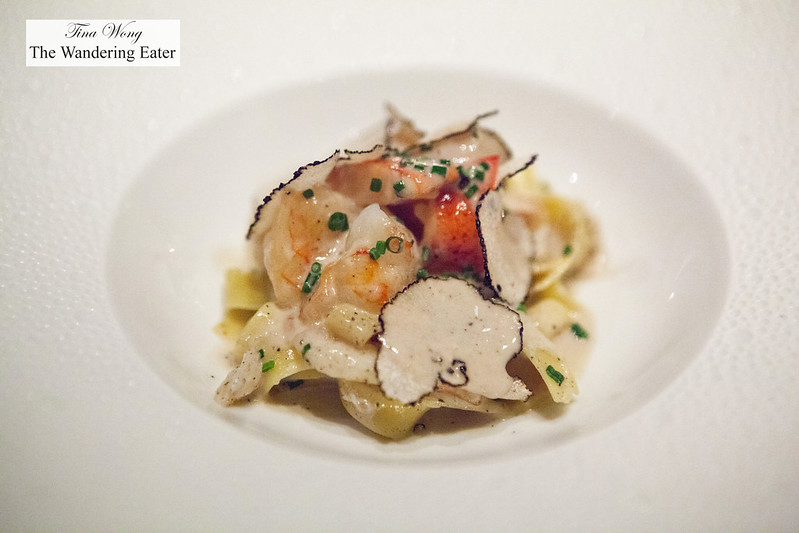 The seafood truffle pasta course was seductive from the beginning with the distinctively earthy smell of fresh shaved truffles and the equally aromatic and creamy truffle emulsion spooned on top when served. The seafood (crab, scallop and lobster) still managed to have its moment on the palate instead of being dominated by the truffles. The pasta was perfectly al dente and was a great canvas to the dish.

Throughout this dinner, there were wines paired with each course. I admit, I lost track with most of them but generally recalled they worked well with each pairing. For the pasta course, I did adore the German Riseling by von Hövel, Feinherb, Saar 2014. The wine wasn’t too sweet and refreshing and just worked along with the dish nicely. The wine was great solo as well. 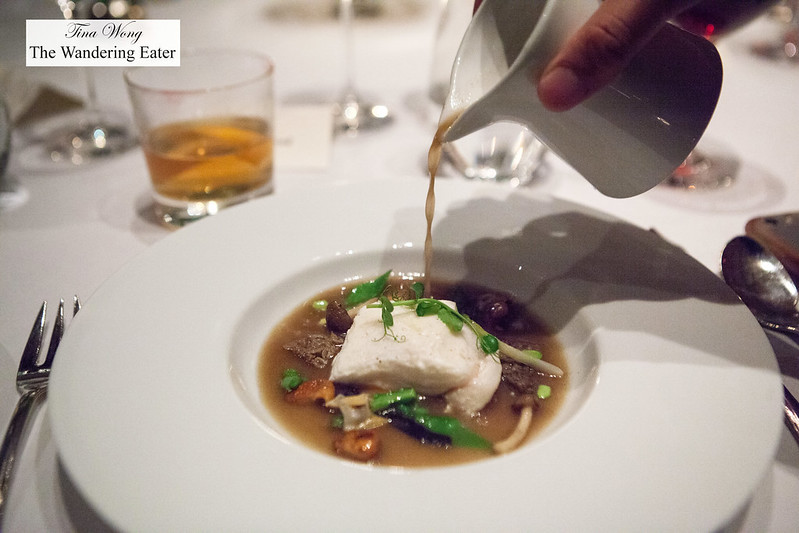 Poached halibut, Manila clams, wild mushroom casserole was a great fish dish, especially with the early spring fresh morels. The halibut was incredibly buttery (naturally) and the assortment of mushrooms makes it great. 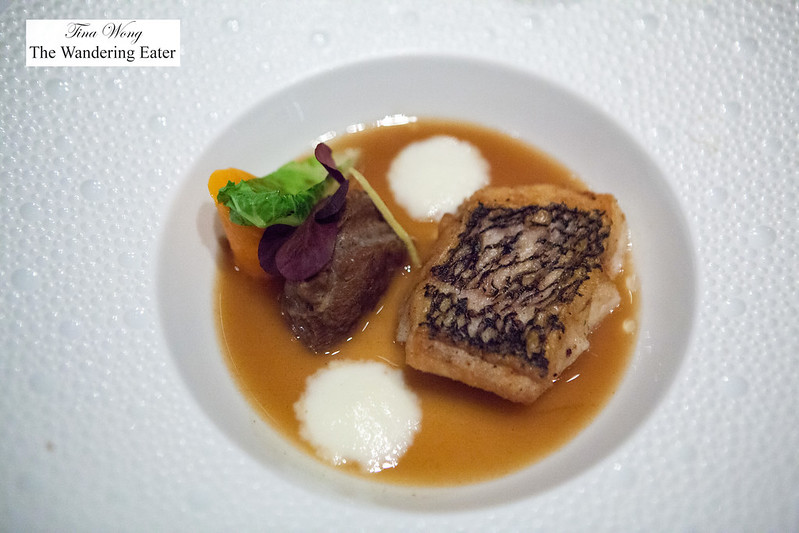 The restaurant’s take of surf and turf was surely different than what you’d normally encounter at a steakhouse. Le Bernardin’s version is composed of supple braised veal cheek and crispy black bass, ginger-five spice reduction and dotted with a creamy parsnip emulsion. I prefer the halibut over the veal but the dish overall was very tasty. 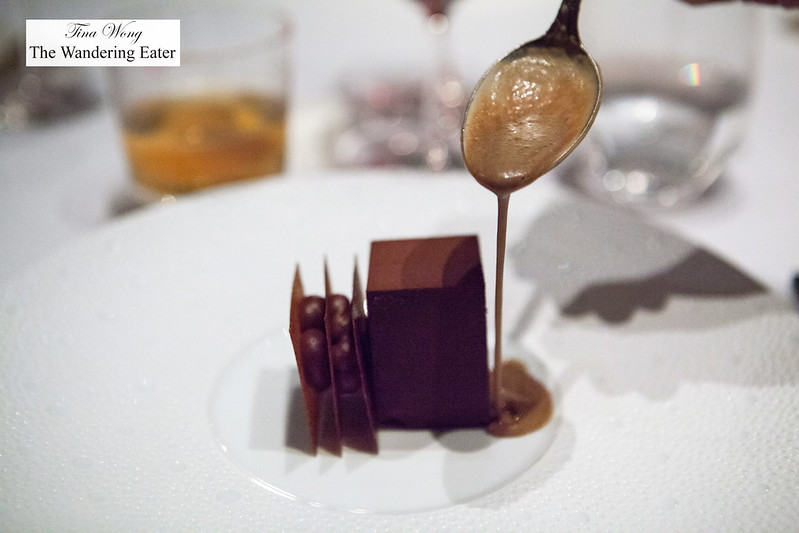 Coming toward the end of our meal, we’ve arrived to dessert of coffee caramel cremeux and roasted almond mousse encased in chocolate, a miniature millefeuille filled with creamy chocolate ganache and topped with bourbon froth. The flavors were in perfect harmony and the bits of texture was great. 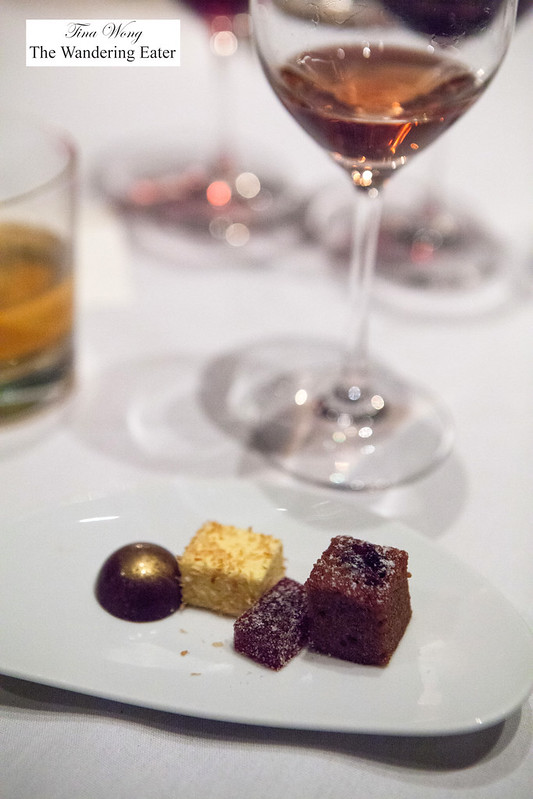 The plate of petit fours to officially end this excellent meal were composed of a banana cream bonbon, passion fruit coconut marshmallow, cherry pâte de fruit, and a cube of cherry cake. One of the waiters liked the pairing of the banana bonbon and cherry cake together (we asked), and it does work well.

This entire experience with Le Bernardin and SPG was unforgettable and amazing. Ranging from the beautiful decor, excellent service and fare (as expected from a 3* Michelin restaurant) and to have Chef Ripert to do a demonstration of a dish we ate, it was unexpected and was the cherry that topped this incredible sundae.