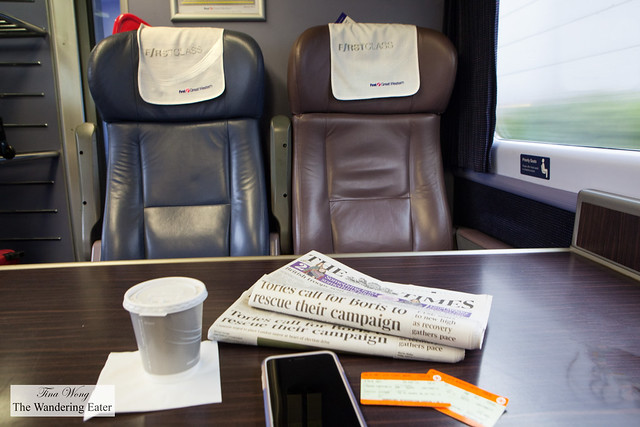 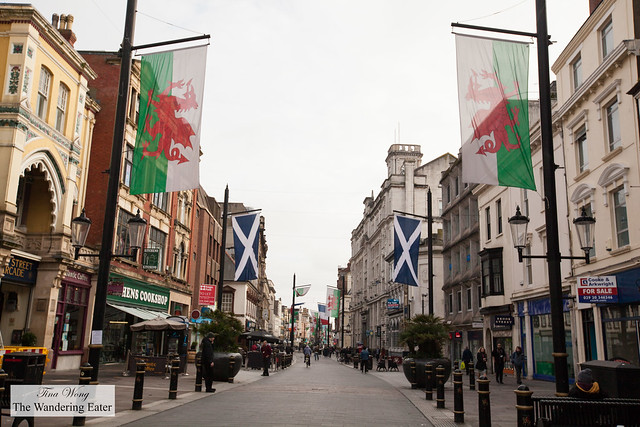 Visit Wales recently invited me to fly over and have a week-long trip to explore southern and western parts of their beautiful country. The first stop was Cardiff. Cardiff is the Welsh capital, located in the southern part of Wales. This city was largely built during Britain’s 19th-century coal boom and was generally not considered one of the country’s most attractive cities. But times are changing. Major regeneration projects since the 1990s — a new performing arts center, a revamped waterfront and a 74,000-seat stadium, to name a few — have given the city a fresh face.

I arrived to Cardiff by flying to Heathrow Airport in London, take the train to Paddington station (in the center of London), and take Rail Europe out to Cardiff. The train ride is about two hours long and it’s a relaxing ride over. Since I was riding in the First Class carts, there’s the convenience of having free Wi-fi and power outlets to recharge my iPhone and laptop with a table and comfortable leather chairs or banquettes. In case you are feeling peckish, there is a snack cart that rolls up and down the aisle at every other stop, stocked with snacks like bags of peanuts, granola, and shortbread cookies. There’s beverage choices of coffee, tea or bottled water. 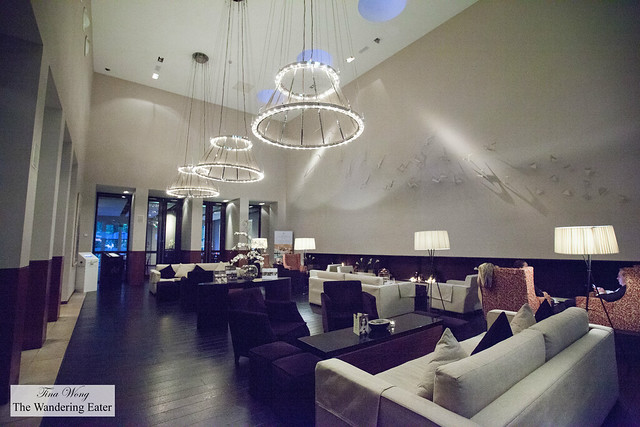 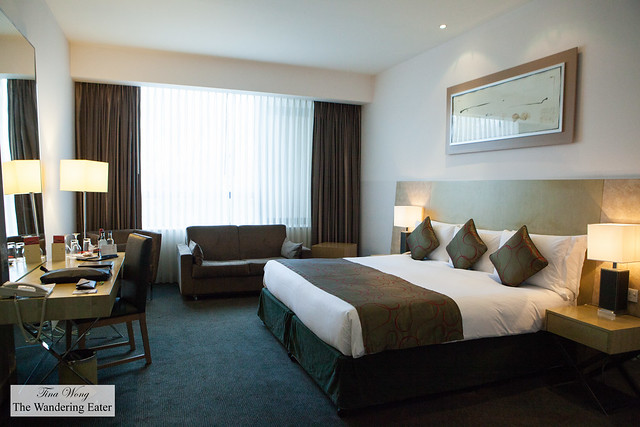 Once off Cardiff train station, my hotel for the next two nights was at Park Plaza Cardiff. This deluxe boutique hotel is conveniently located in Central Cardiff, about 15 minutes walking or 5 minutes by taxi from the train station. This hotel is tastefully done with high ceilings throughout the hotel from lobby to room. My room (a junior suite) was spacious, the queen size bed was comfortable, and the bathroom was beautifully modern furnished with a bathtub. 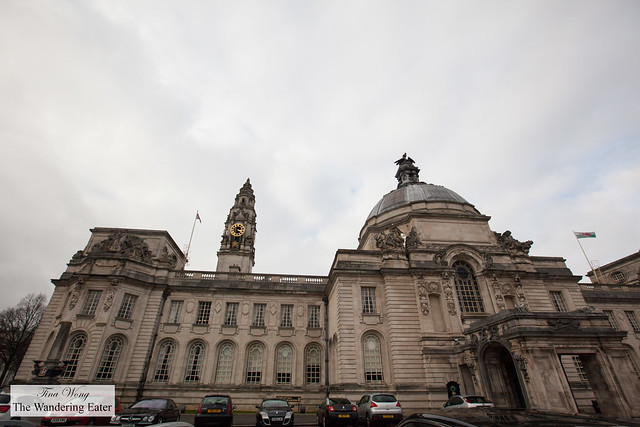 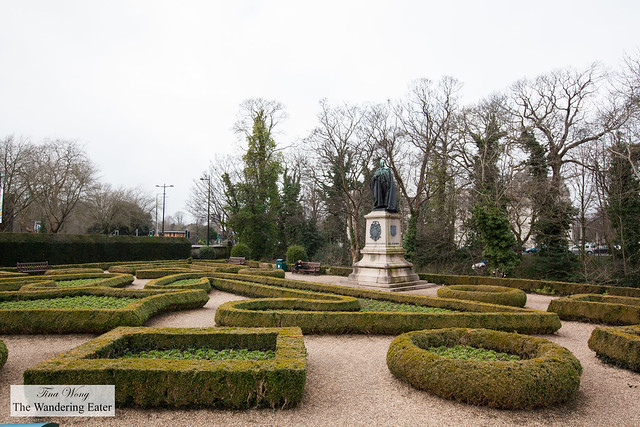 Within a few minute’s walk down Greyfriars Street, Cardiff’s City Hall is just there, as well as the maze-like Friary Gardens. (Too bad, it was too chilly then to sit and people watch at the garden.) 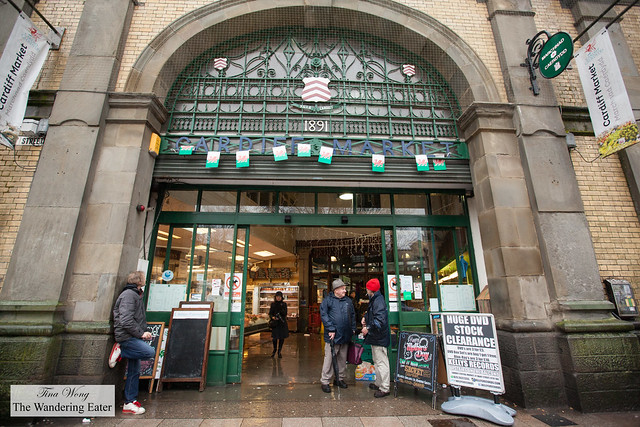 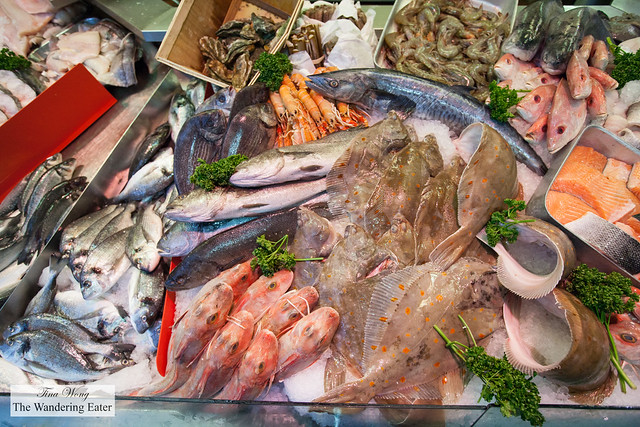 Continue to walk down Castle Street and High Street and turn in to St. Mary Street, there’s Cardiff Market (in Welsh: Marchnad Ganolog Caerdydd). This is one of the famous Victorian-style indoor market. The market was designed by the Borough Surveyor, William Harpur, and opened in May 1891. A farmers’ market is known to have existed at the site since the 18th century. The market consists of two shopping levels, a ground floor and a balcony level which wraps around the market exterior walls on the interior. The various vendors are an unusual assortment of bakeries, seafood stalls, produce, record shop, clothing, pet shops, and fast casual restaurants for a quick meal or sandwiches.

When you are there, do pick up some fresh griddled Welsh cakes (think of a thin yet fluffy, slightly crumbly scone studded with dried currants) and if you do like to eat fresh seaweed, it’s called laverbread, you should pick up a small bag and cook with it. 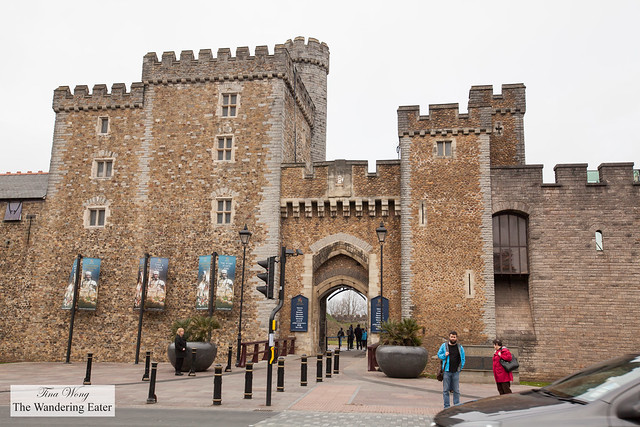 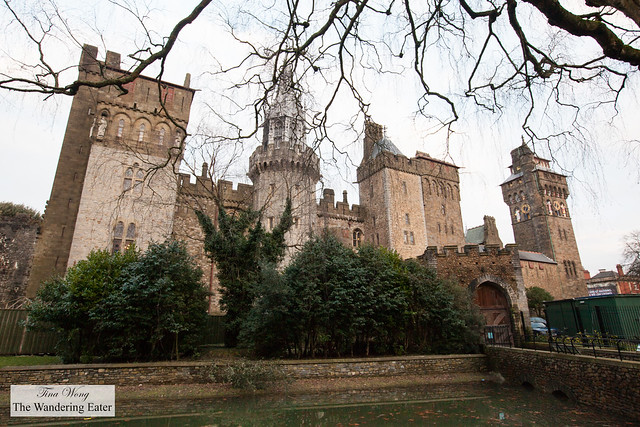 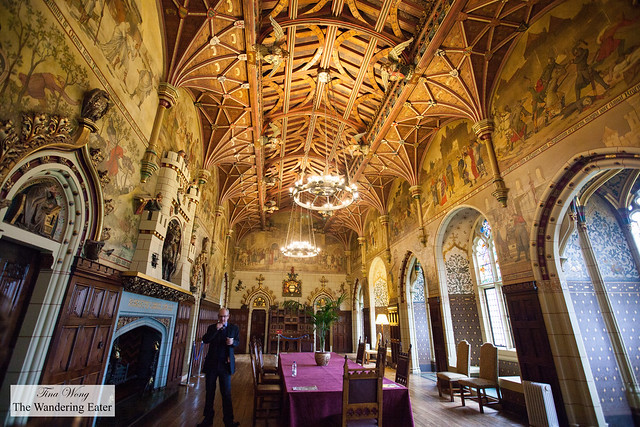 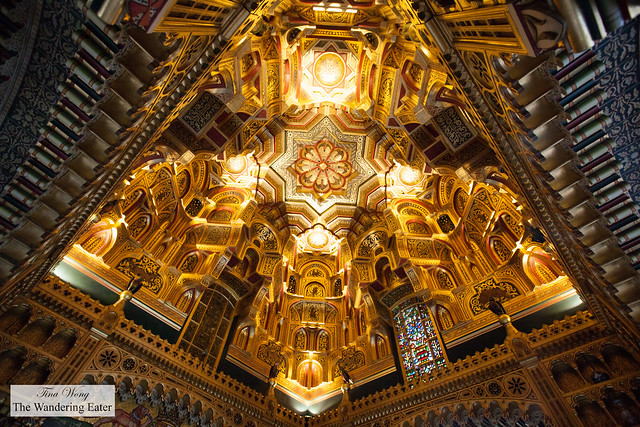 Cardiff Castle: Front entrance; side view; Inside the main dining hall; The detailed ceiling of the Arab Room

Cardiff Castle is a medieval castle and Victorian Gothic revival mansion. The original part of the castle was built in the late 11th century by Norman invaders on top of a 3rd-century Roman fort. After the Norman conquest, the Castle’s keep was built, reusing the site of the Roman fort. The first keep on the motte, erected by Robert Fitzhamon, Norman Lord of Gloucester, was probably built of wood. Further medieval fortifications and dwellings followed over the years.

The Castle passed through the hands of many noble families until in 1766, it passed by marriage to the Bute family. The 2nd Marquess of Bute was responsible for turning Cardiff into the world’s greatest coal exporting port. The Castle and Bute fortune passed to his son John, the 3rd Marquess of Bute, who by the 1860s was reputed to be the richest man in the world.

From the 1860s, the 3rd Marquess employed the architect William Burges to transform the Castle lodgings. Within Gothic towers he created lavish and opulent interiors, rich with murals, stained glass, marble, gilding and elaborate wood carvings. Each room has its own special theme, including Mediterranean gardens and Italian and Arabian decoration. The 3rd Marquess died when he was only 53 in 1900.

Despite huge death duties on the estate, the 4th Marquess completed many of his father’s restoration projects including the reconstruction of the Roman wall. The Bute family continued to stay at the Castle throughout the 1920s and 1930s, although they had sold off many of their business interests in south Wales.

Bute family donated the castle as a “gift to the people of Cardiff.” Citizens of Cardiff may enter this spectacular site almost any time he or she may wish with a certain key. The city still holds important events in this castle (e.g. hosting the Queen of England or diplomatic dinners) and also renting it for weddings. 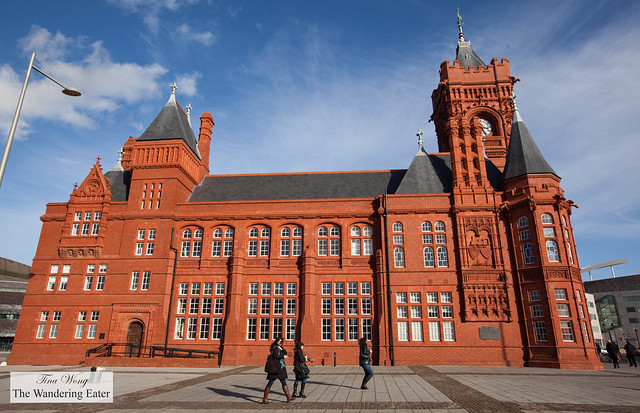 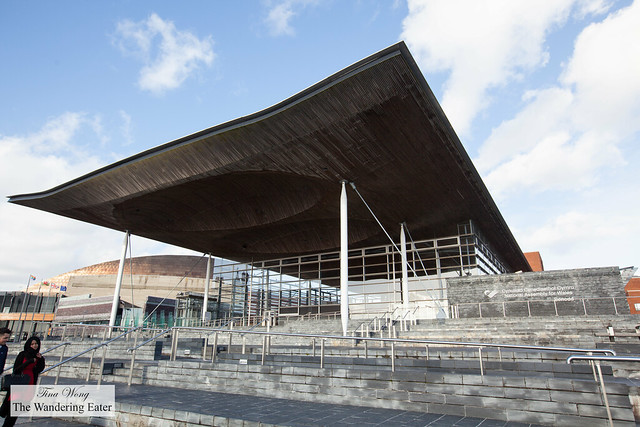 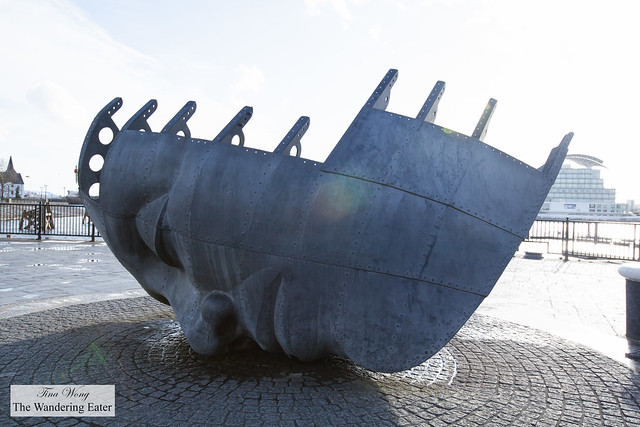 About a 15-minute drive down to the waterfront, there’s the National Assembly for Wales, known as the Snedd, built by Richard Rogers, the Pritzker Prize-winning architect (along with Renzo Piano).

The Pierhead Building (the prominent red brick building) houses a small exhibition that describes how coal transformed the city during the 19th century.

The enormous Merchant Seafarer War Memorial that has a human face on one end and on the other, a shipwrecked hull, or the lowermost portion of a ship. The memorial was commissioned in 1997 by the Cardiff Bay Arts Trust (CBAT) as an art piece to honor those who served in Merchant service, sadly caught up in armed conflict – in particular, those from the Cardiff Bay area. It was created by Brian Fell. 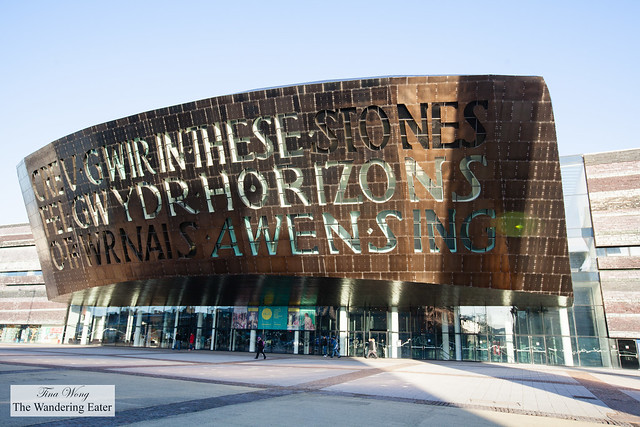 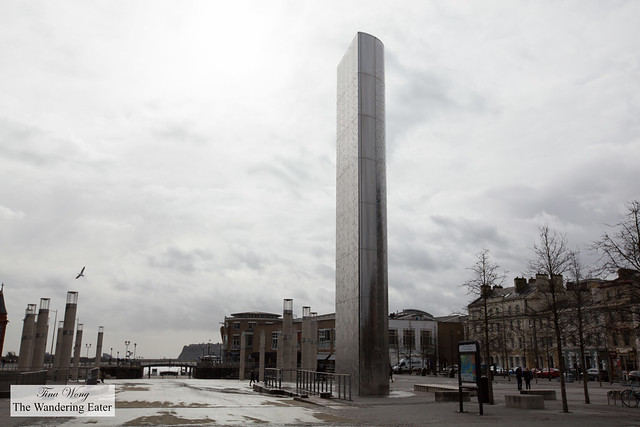 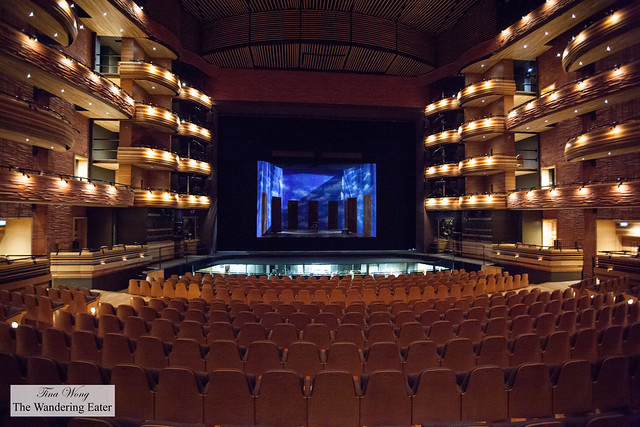 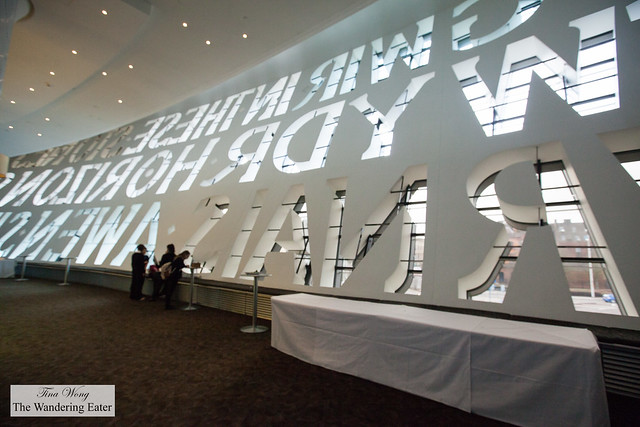 We had one afternoon to have a tour of the city’s landmark performance arts center, Millennium Center. The exterior symbolizes what Wales is known for: slate, copper (via chemically treating the stainless steel dome to give it a coppery hue), and wood. The Welsh inscription of the dome Creu Gwir Fel Gwydr O Ffwrnais Awen, it translates to “In These Stones Horizons Sing,” as a reflection of the positive changes of Wales.

We did have lunch at ffresh inside Millennium but I’ll hold off writing about the meal as a separate post.

Cardiff is definitely worth exploring, as it works on a different speed than say the restlessness of New York or the proud city London who’s steep in nobility and history. 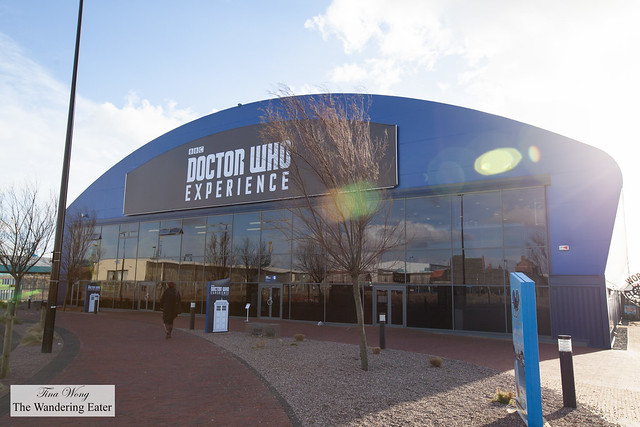 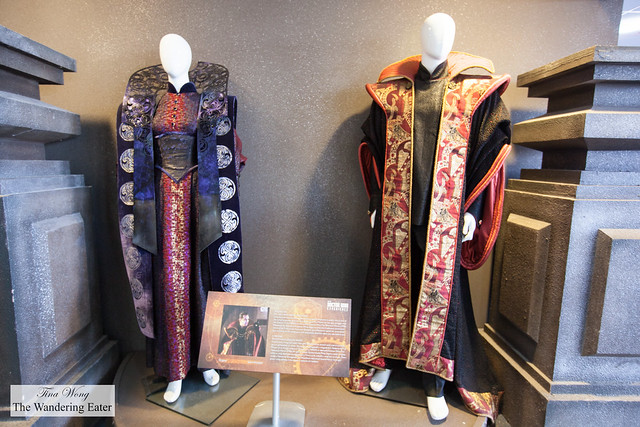 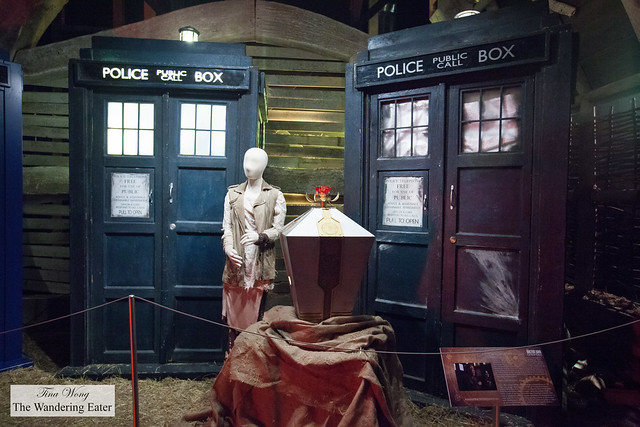 For the fans of the British sci-fi series, Dr. Who, there is the Dr. Who Experience. This particular venue exhibits the different props, costumes and scenes of this cult show and even have an interactive show based on this series. It’s good, cheesy fun.

To view more photos of this city, please CLICK HERE or view the gallery below: