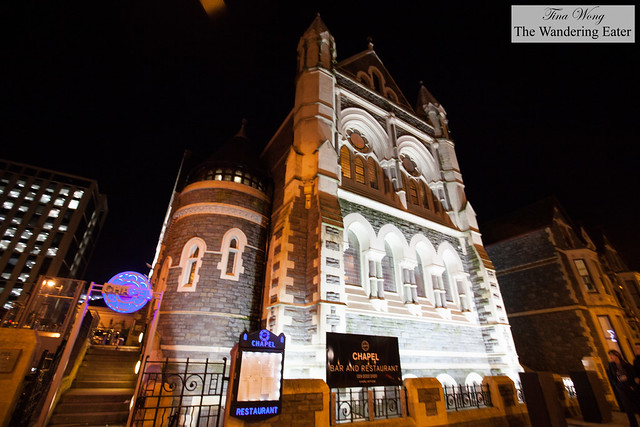 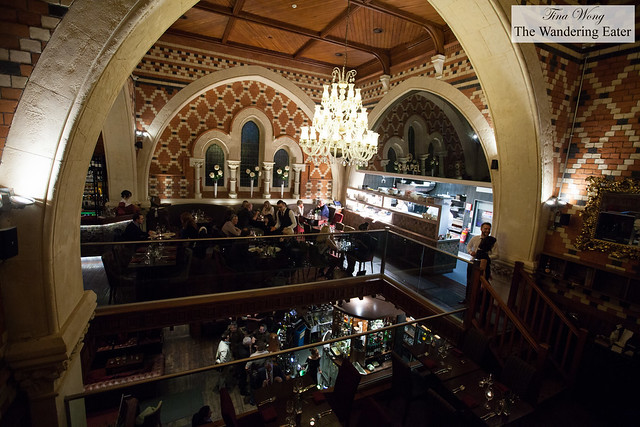 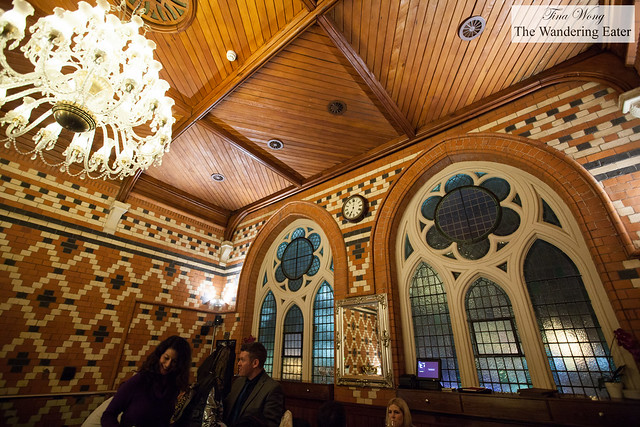 I recently went to a press trip to South Wales and had an amazing time. While I will write an appropriate introductory piece about the great city of Cardiff in the next post, I’m going straight to one of my dinners at Chapel 1877.

Chapel 1877 is a buzzy restaurant in Cardiff, Wales that opened in 2008. It was former Pembroke Terrace Chapel and it’s respectfully restored the church’s beautiful French Gothic architectural details (it’s a Grade II listed building). The restaurant is divided into three spaces, a bar dining area, main dining spaces and the private dining area. 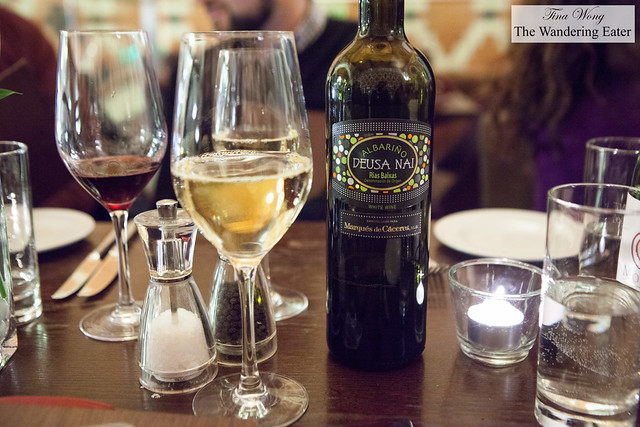 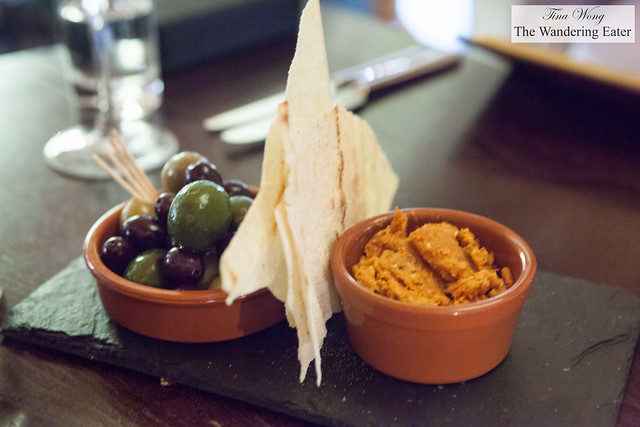 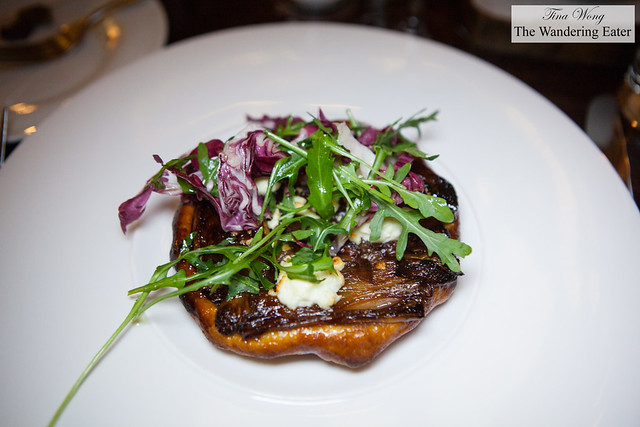 When you read the menu, it’s creative British cuisine that has global influences. My group and I settled on two wines to start with — Deusa Nai Albariño 2013 Marqués de Cáceres and Cape Mountain Shiraz 2013. We shared plates olives, tomato pesto, and Music bread. The music bread is like a crispy, cracker-like flatbread and it’s incredible with the creamy yet sharp tomato pesto.

My appetizer was the shallot confit tarte tatin, Pant-Ysgawn goat cheese, winter leaves that paired wonderfully with the Albariño. The buttery, crisp tart crust was delicious with the sweet, caramelized shallots and creamy local goat cheese, the leaves of arugula gave it a refreshing, bracing note to contrast the richness of the tart. 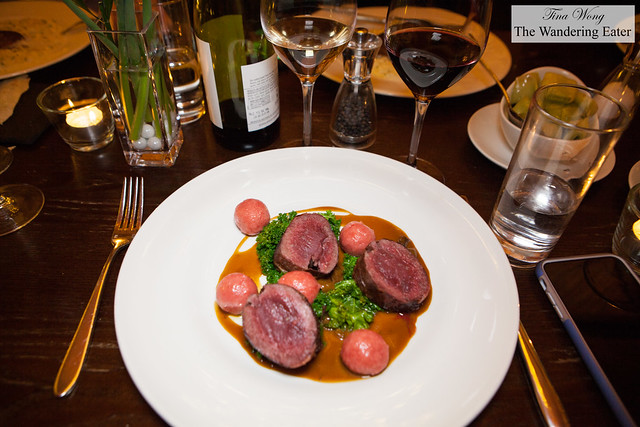 My roast venison loin, prosciutto beetroot and goat cheese gnocchi was great. Tender, medium-rare venison that’s well seasoned. The pink-purple orbs of gnocchi that is stuffed with creamy goat cheese. The bitterness of the slightly crunchy kale was a good foil for texture and flavor.

We did share some side dishes of vegetables of leeks and brussels sprouts (seen here) but they were unremarkable. They were overcooked and greasy, unfortunately. 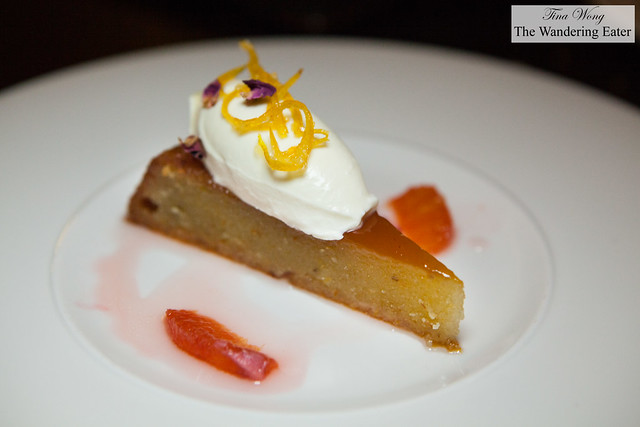 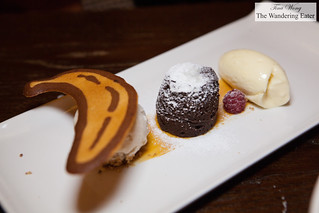 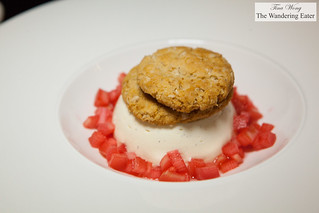 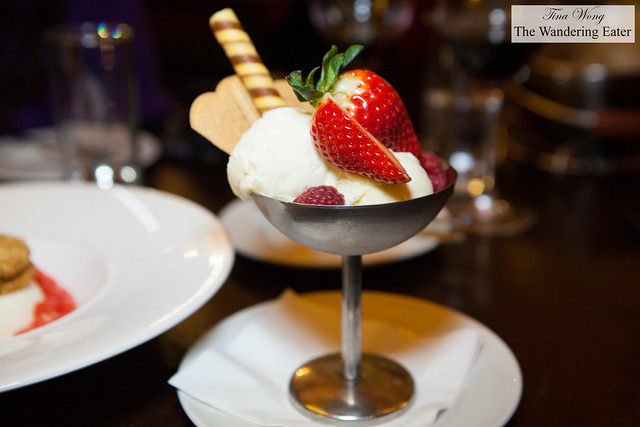 For dessert, we decided to share since we wanted to try more than one dessert. The dessert I was particularly eyeing on was the flourless blood orange and almond cake, Jersey creme fraiche, rosewater and cardamom just because of the potential vibrant and robust Middle Eastern flavors read on the menu. The dense almond cake had the taste of sweet-tart blood orange but it was dominated by the very tart creme fraiche (my palate presumed it’s Greek yogurt).

The dark chocolate and peanut butter fondant with salted caramel and banana ice creams is a familiar flavor combinations and was well executed. The banana ice cream was the star on that plate; it’s tasted of pure banana.

The Jersey cream vanilla panna cotta, Yorkshire forced rhubarb with ginger biscuits was a good dessert but nothing too notable. (Forced rhubarb is rhubarb was forced to grow in shade rather in lots of sunshine.) The panna cotta was silky, creamy and not too sweet. The ginger biscuits won the heart of one of my travel mates as it’s buttery, crumbly and a nice candied ginger flavor.

One of the other ladies on my table wanted ice cream and thankfully she did do that. One of the ice cream flavors available that evening was truffle honey and we were swooning over the sweet, musky flavors and she paired it off with vanilla so it won’t compete the complex flavor of the former. (Tangential note, ideally, I would have that flourless blood orange cake topped with that truffle honey ice cream. That would be complete bliss.)

Overall, we had a great time at Chapel 1877. Staff was very courteous. I’m very thankful there wasn’t any loud music thumping on the background, so it’s about the tasty food, the people you’re dining with, and the beautiful space. I would certainly would come back to this restaurant.