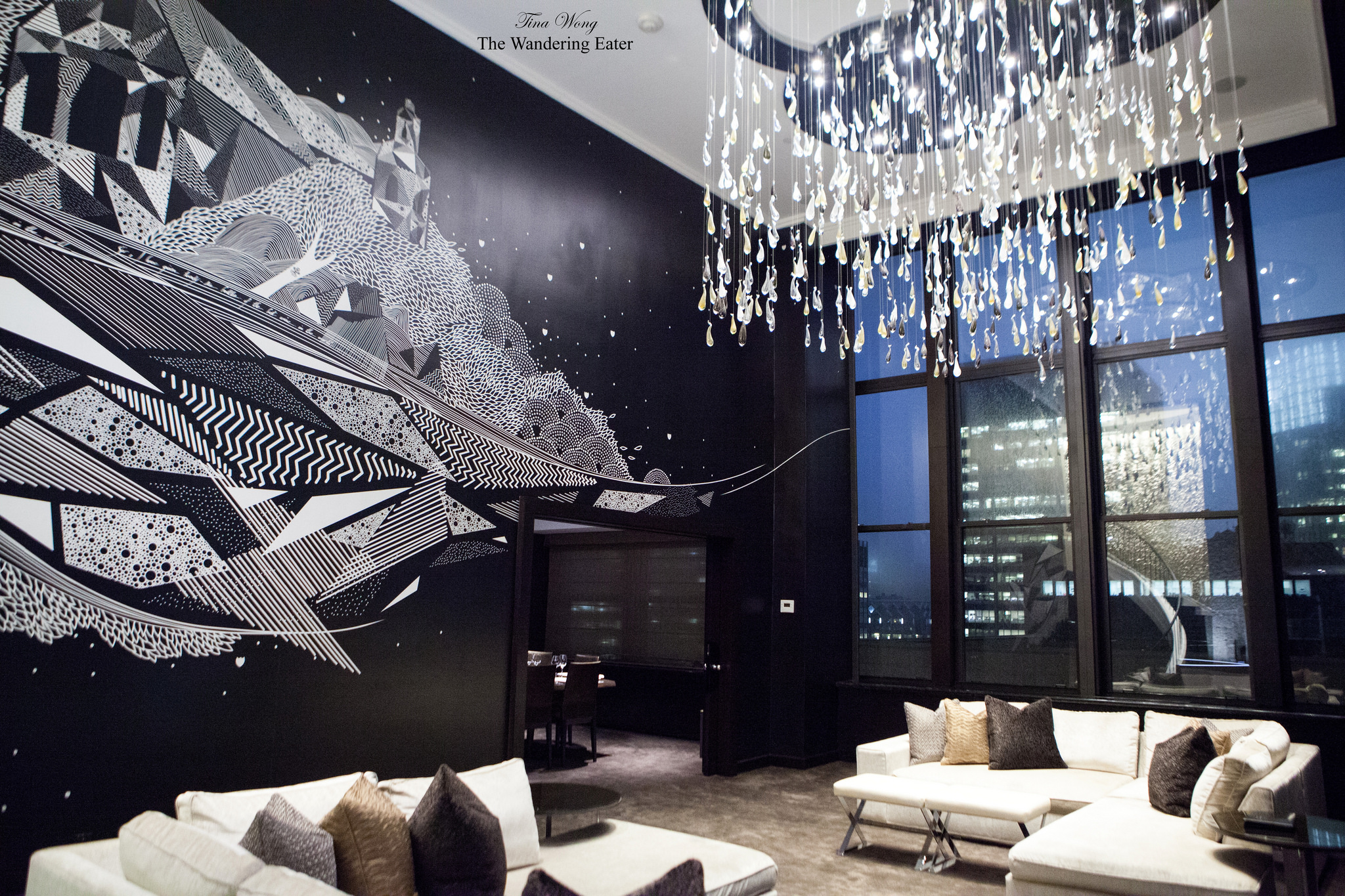 I had the good fortune to visit the New York Palace Hotel recently. Granted, I’ve eaten the wonderful, whimsical, and delicious confections of Chef Michel Richard’s at Pomme Palais during the holiday season. But that evening of potently good cocktails, dining at Villard Michel Richard, and go up to one of the hotel’s signature Tower suite, the Jewel Suite, it’s incomparable. During the Helmsley Era, his wife, Leona Helmsley tyrannical management style of her hotel to the point that she was known as the “Queen of Mean.” Also Mrs. Helmsley had a beloved lapdog who is named Trouble, who inherited $12 million dollars when the will was read. So, the owners of the New York Palace wanted to give a nod to the Helmsleys and named this lounge that’s found at the bottom of the Grand Staircase, Trouble’s Trust.

Since I was here it just seemed so apt to have a cocktail named, Queen of Mean ($19), made of Breuckelen NY Wheat Whiskey, Ginger Bee NY, Red Jacket NY Apple Juice, Averell “Damson Gin” NY, elderflower syrup, fresh lemon, and baked apple chip garnish. It certainly got some bite like Mrs. Helmsley but it a very tasty drink. Also their bar snacks of cheese crackers were seriously addictive. All of their signature cocktails mentioned uses local spirits, which I appreciate.

I had companions around who had the Phoenix, Spanish Rose, and The New York Deli. The latter cocktail was very unique that it does reminds me of the salty, briny dill pickles I’ve eaten on the side whenever I order sandwiches at the deli. I totally get it this drink and it does embody the deli experience in a drink. We headed over to Tavern 51, which doesn’t even look remotely like a tavern at all. It looked like a sophisticated yet cozy lounge in contrast to the sleek, dark and sexy Trouble’s Trust.

Most of us had ordered from their specialty cocktails of the wonderfully balanced yet sweet, gin-based Honey Bramble and the Rare Manhattans ($19 each) and snacked on more of their delightfully sweet-salty nuts. Thankfully, we had real food to absorb our poisons of choice having dinner at Villard Michel Richard. This particular restaurant is run by the same chef of Pomme Palais and it’s a French restaurant that has a bistro and a separate dining room called The Gallery for the guests who will have the tasting menu. The Gallery is an interesting room full of huge portraits of the gorgeous Hollywood’s Golden Age lining up the walls of the room.

The dinner at the bistro was overall very solid and service was very attentive. We started with trays of delectable charcuterie and a bowl of silky salmon tartare topped with creamy avocado served with housemade potato chips. The trio of mostly hearty entrées — feather light gnocchi a la Provençal, Michel’s extra crispy, crusty fried chicken that revealed moist meat underneath, and the rich braised short rib with garlic mashed potatoes.

(For photos of the entire meal at Villard Michel Richard, please CLICK HERE.) We headed across the hotel to Rarities, an exclusive, reservations-only lounge that house and servers only the rarest spirits and wines like a $300 tumbler of Scotch, Remy Martin Rare Cask Cognac, or $10,000 bottle of vintage Port. The other way one may access this place is if you are a guest at the Tower. We had our desserts of sublime in-house made bonbons and tuxedo chocolate covered strawberries. Being in a lounge with beautiful displays of their rare spirits, you can’t help but be quiet and admire the fine things around you. To finish this amazing tour, we ended at the Champagne Suite at the Tower. This Art Deco inspired 5,000 square feet triplex collaborated with Martin Katz is simply stunning. Bottles of Dom Perignon Champagne waiting at the master bedroom. Magnificent views looking west of Manhattan. A private elevator that leads up to its third floor terrace. Despite the fact it was a rainy, foggy night, it did make for really cool views of the Midtown landscape.

With the fabulous modern lounges, beautiful restaurant that serves solid French-American cuisine, and luxuriously contemporary suites that would make you almost feel like home at this historic landmark building.

To view more photos of this entire visit, please view the gallery below (or CLICK HERE):