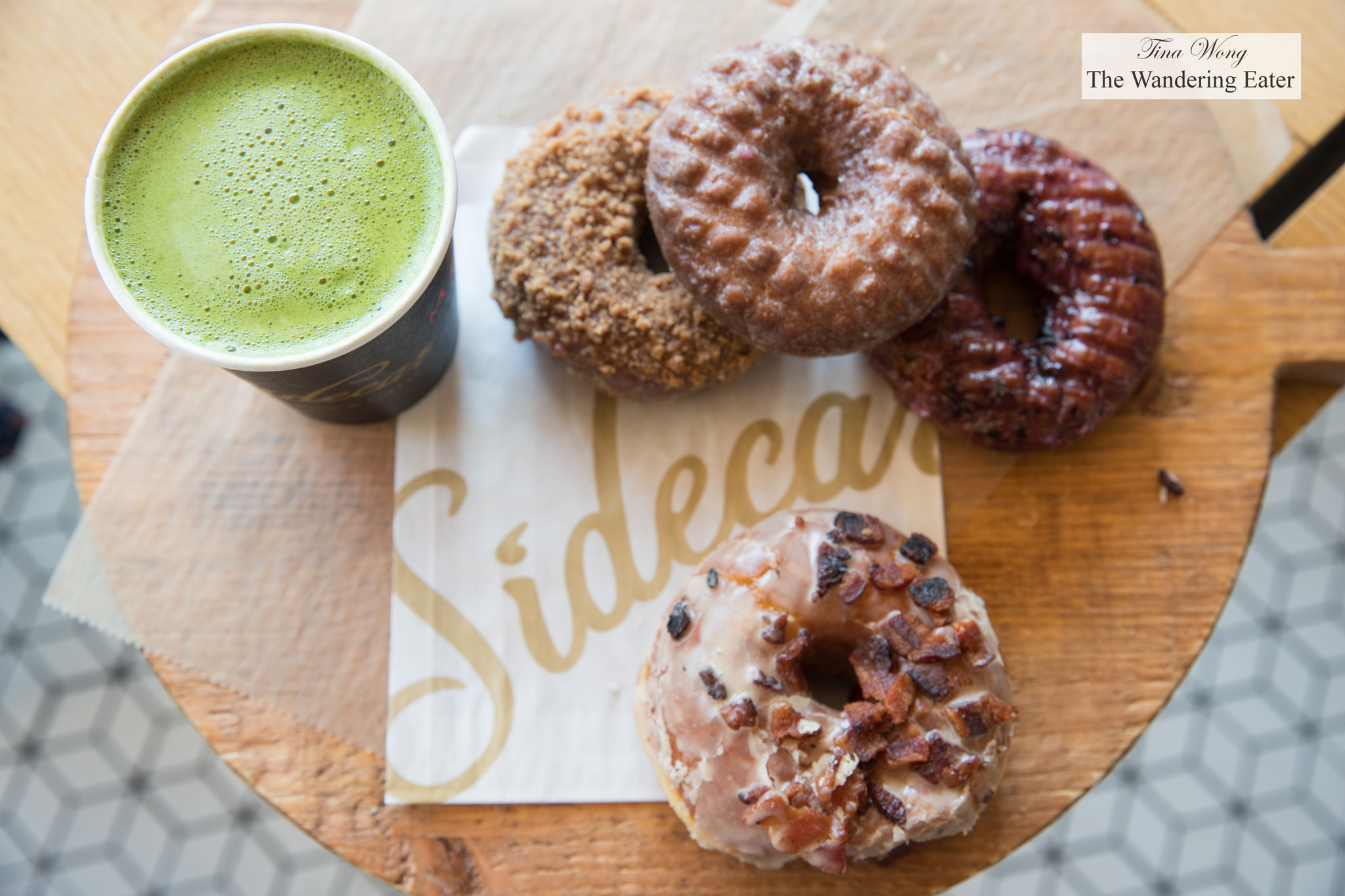 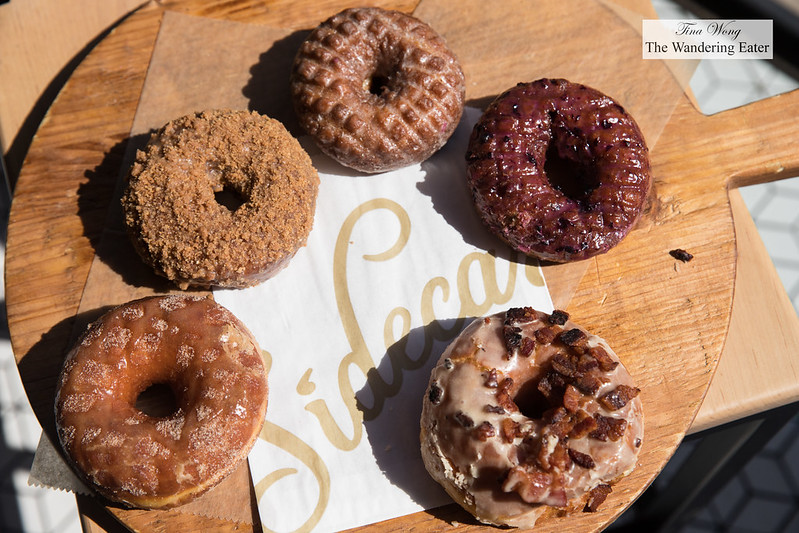 Sidecar Doughnuts is a popular doughnut shop that started in Costa Mesa back in 2012. The Santa Moncica location that we visited opened nearly three years ago and since been one of the places to get a very good, if not excellent, doughnuts in the Los Angeles metro area. What appealed to me initially are the flavors. It’s familiar yet creative enough and it doesn’t look gimmicky compared to other shops (e.g. I don’t need to see a cute panda face on my doughnut to want to eat one). What I liked the most based on that visit was the friendly staff and seeing the kitchen team making literally small batches of doughnuts at a time.

My friend and I headed to Sidecar after our intense Vinyasa yoga class on a weekend early afternoon and ordered a couple of them since we were starving. Unfortunately, we were too late for the basil eggs benedict doughnut. (Insert sad face since I’ve been enamored with savory pastries for the past several years.) My friend gotten an iced Vietnamese coffee that was boldly flavored of coffee and had just the right amount of sharp rich sweetness of the condensed milk mixed in and I’ve gotten a solid matcha latte just to have some form of caffeine without it being coffee.

The huckleberry cake doughnut with huckleberry glaze was delicious. It’s pure, sweet ripened berries with a moist, fine cake texture without it being greasy or dense. The textures are the same for the other raised and cake doughnuts and it’s a great thing. Maple bacon doughnut was delicious for the sweet maple glaze and salty, crisp Niman Ranch bacon flavors mingle nicely. The monthly flavors like apple cider was dusted with apple pie spice & cinnamon, and finished with a drizzle of our signature apple cider glaze that was good but I felt there wasn’t enough apple coming through though it’s spiced well like the beverage would. 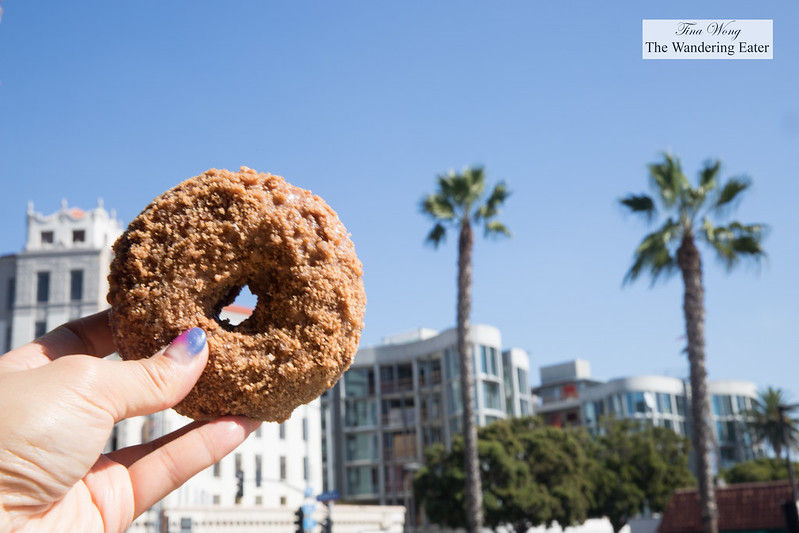 The Saigon cinnamon crumb doughnut was great for the sweet, warm cinnamon flavors and I adored the crumb’s slightly crunchy texture. It’s an elegant doughnut. 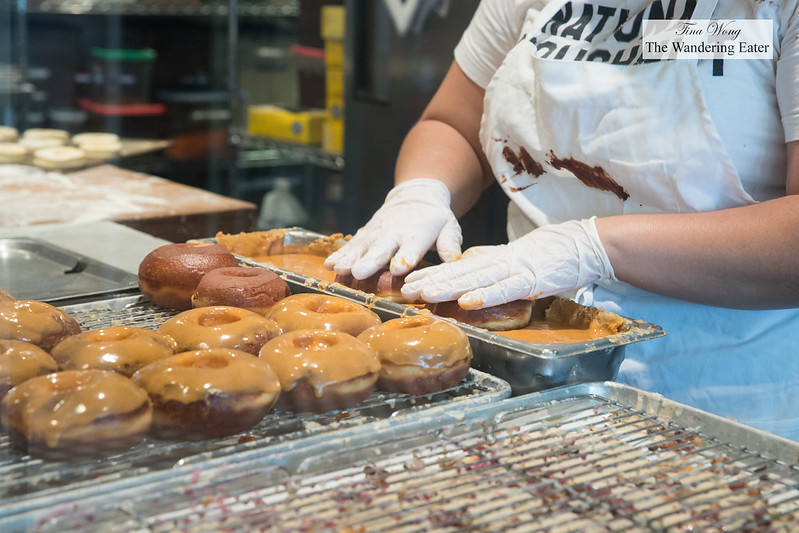 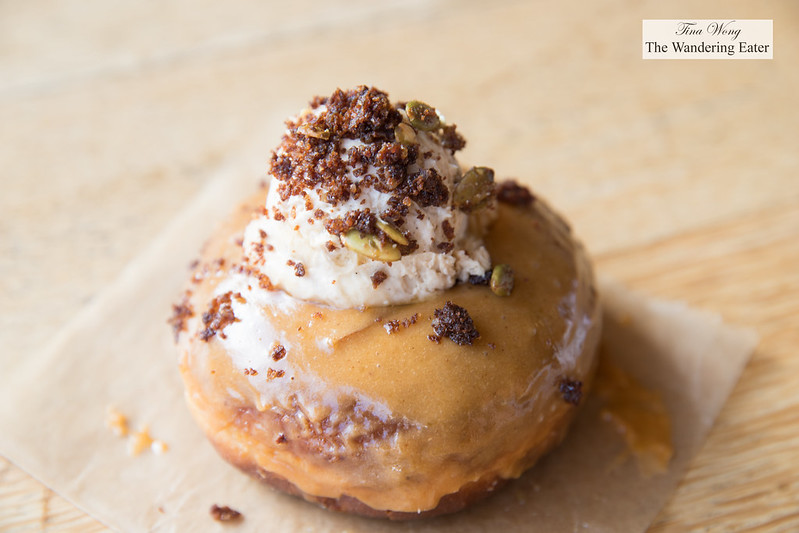 Since there wasn’t any more egg benedict doughnut, we waited for the Pumpkin Pie & Everything Nice doughnut. It’s a raised bullseye doughnut dunked in pumpkin glaze, topped with whipped mascarpone pumpkin mousse, house made ginger snap crumble, roasted and salted pepitas (pumpkin seeds), and Vermont Maple Syrup. This came out fresh from the fryer and it was delicate to hold onto that it made me nervous that it would fall apart in my hands when I tried carrying it out from the register to the table I sat outside barely yards away. It’s a superb doughnut as it’s pillowy light and the flavors resonate a version of the (over hyped) pumpkin spice latte but done so much better with the balance of flavors, with better ingredients and you can eat it.

If I ever lived in LA, this would be my once or every other week visit for breakfast or afternoon doughnut option. Or if they do ever expand to NYC, I’d be happy to swing by and get a few doughnuts.