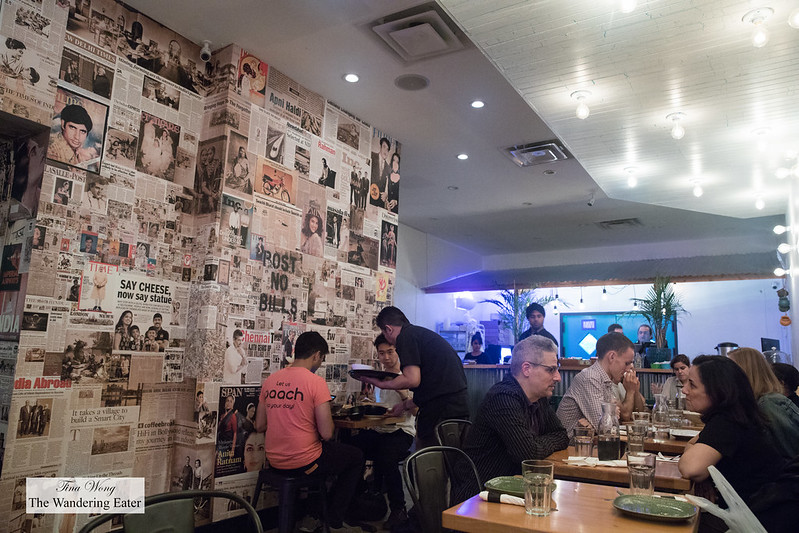 I have to admit, Adda is probably one of the best Indian meals I have had in a long time. Though most of the fare served is traditional but it’s actually cooked perfectly (almost all). Robust spices that awaken the senses and some were spicy that one should expect and probably seek a glass of gently sweet mango lassi to soothe the palate.

Adda is tucked in between a small row of small shops on Thompson Avenue, not far to the street leading you to the Ed Koch Bridge and it’s across the street from LaGuardia Community College. When we arrived to the restaurant it’s mostly filled with young professionals and a small scattering of college students dining and as night marches on, it edges a little older but not so much. Do note however, it gets packed quickly especially around the 7:00 PM hour. 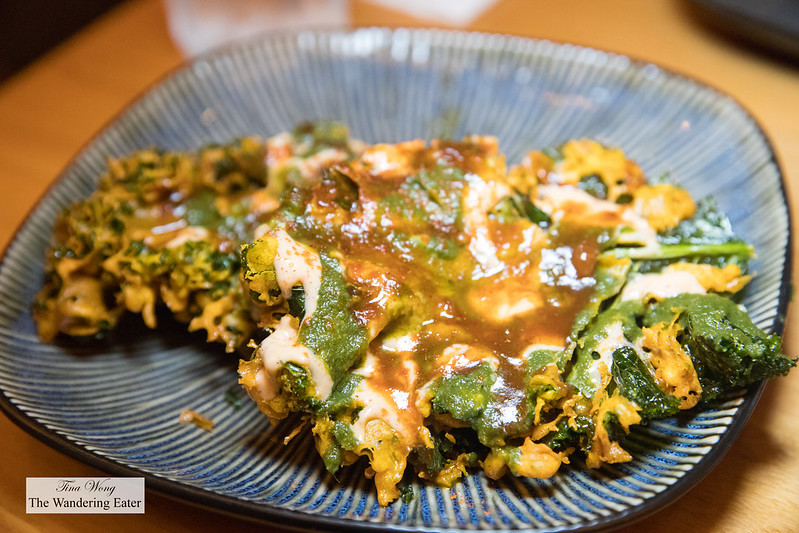 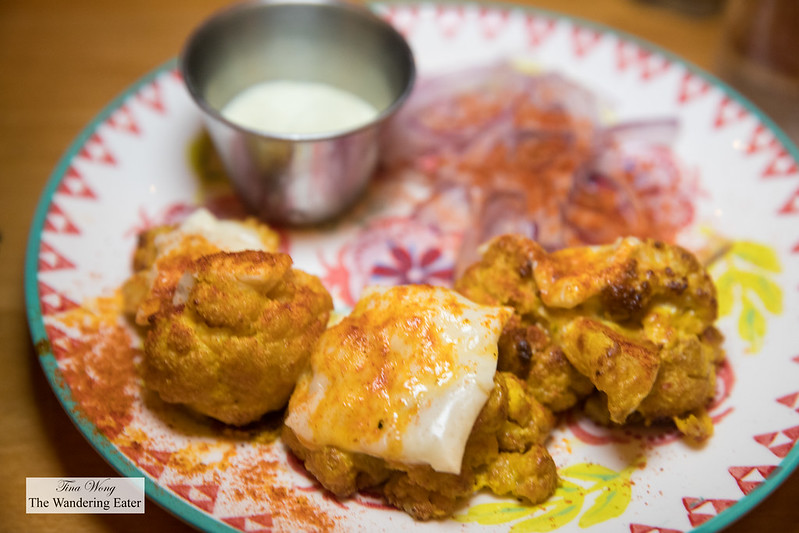 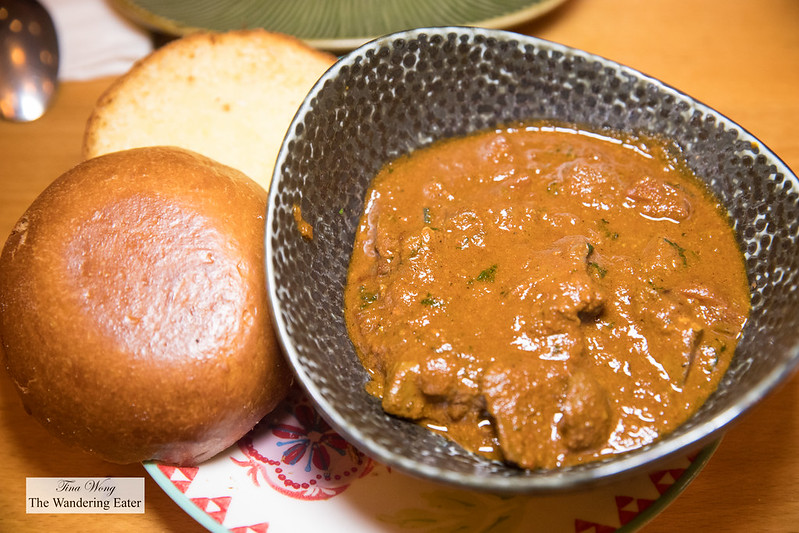 We started off with snacks and appetizers of kale padoka, tandoori gobi and kaleji masala. The kale padokoa is the kind of snack you’d introduce you to your friend who is new to Indian cuisine because it’s so easy to like. It’s like a kale tempura drenched in an array of deliciously spiced sauces. It’s crispy, savory, tangy with a touch of sweetness. The tandoori gobi is a traditional tandoor roasted cauliflower draped with a slice of Amul cheese. The soft, sweet cauliflower was made savory with the spices and the salty kick of the cheddar-like cheese.

The kaleji masala is a dish I rarely see on any Indian restaurant menu in New York City. We were informed it is a humble fried chicken liver masala curry eaten by the working class of Northern India to fill their stomachs as a mid-afternoon snack to go on through the day. This is a slightly elevated version as it’s served with a side of gently toasted brioche bun. Though I am not a big chicken liver fan (unless it’s in the form of a mousse or pâté), this very spicy dish was very delicious especially with the contrast of a soft, sweet, buttery bread. 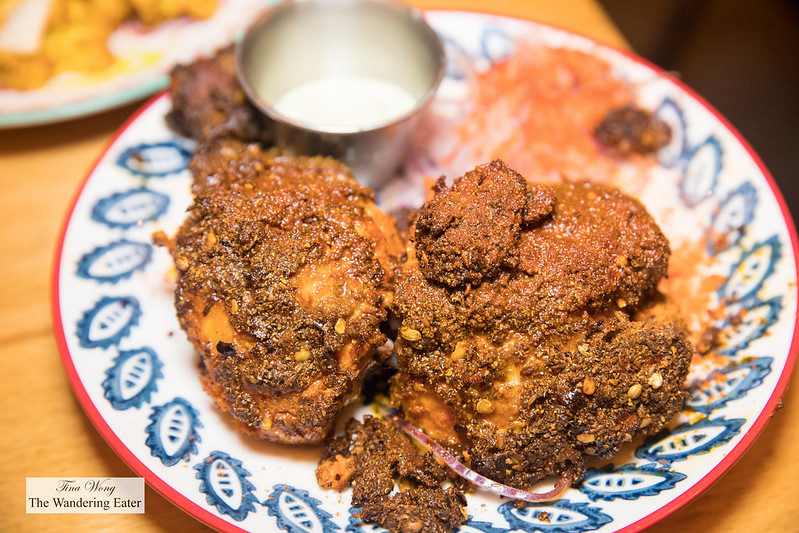 The bhatti da murgh, a whole chicken leg densely coated in mustard and coriander seeds were fiery spicy. Though it was delicious we did realize it was a little under cooked as we cut down to the bone. 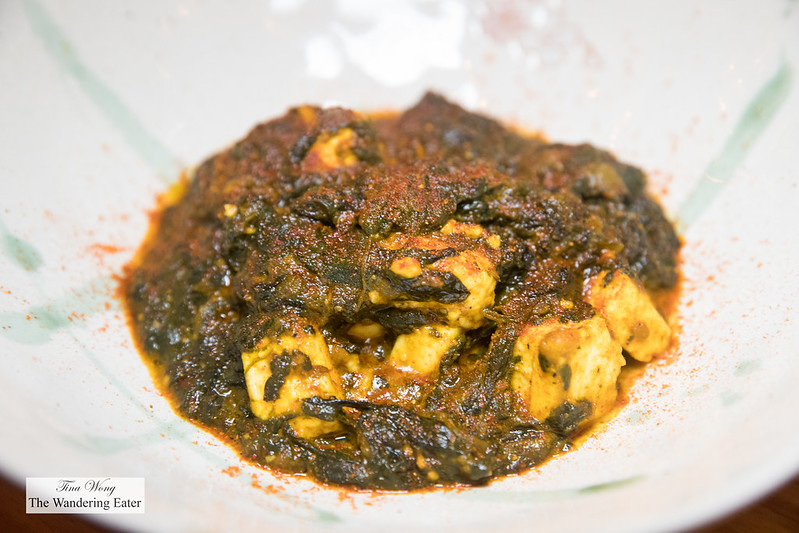 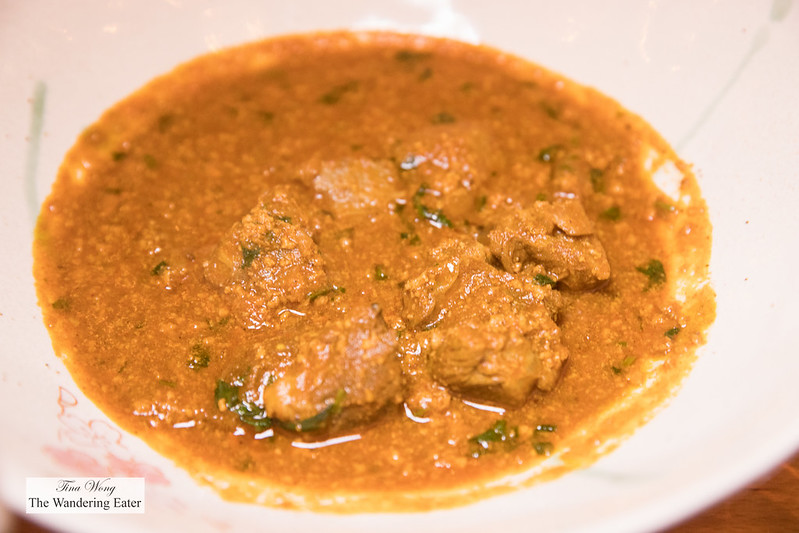 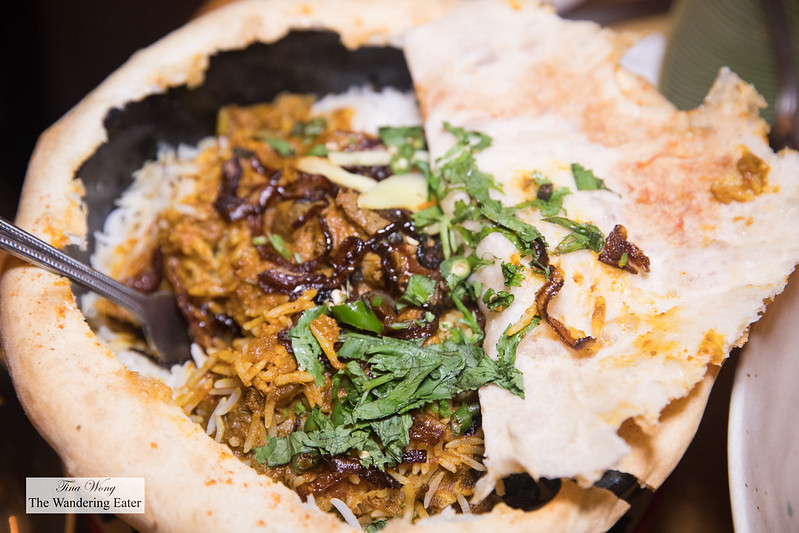 For the main courses, the seasonal saag paneer was the best version of this dish I’ve ever had. It’s so buttery, silky and incredibly delicious. Even the paneer’s texture wasn’t squeaky-chewy or chalky compared to the other restaurants I’ve eaten. The rara gosht, a stew of slow cooked lamb, lamb keema (spiced minced lamb) and coriander was insanely good. Thank goodness it comes with a bowl of basmati rice since it begs for the flavorful sauce to mix with it. The lamb was very tender and not gamy at all.

The popular dish of the evening (based on my observation) was the lucknow dum biriyani. It’s a goat biryani cooked in a round, deep casserole baked in a naan crust. The waiter will cut into the naan crust to reveal the gorgeous colors and aromas of this rice dish. This dish is on the spicy end but it’s so good. The goat meat was incredibly tender and the sauce that it was cooked in was very savory and spiced so well.

Overall, we had a very good dinner that showcases the vibrant flavors of Indian cuisine. There were small blips in regards to the ordering/receiving dishes but it’s forgiving since this restaurant is a few months old. The front of the house staff were friendly and knowledgeable of the food. I can’t wait to go back there soon.