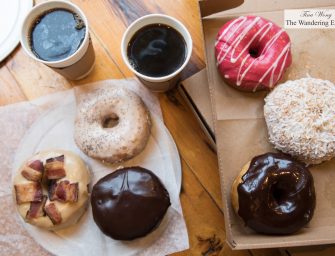 If there’s a doughnut shop I’ve come to like a lot in the Boston area that would be Union Square Donuts in Somerville. (Union Square does have another location in Brookline but Somerville is the most accessible to where we were staying.) I have heard that this popular doughnut shop sells out early that I dragged my traveling companion out of bed early on a cold, rainy/sleet Saturday morning. The price of a little less sleep was rewarded since we have the flavors we would like to have and manage to have a table to sit at a table and.. 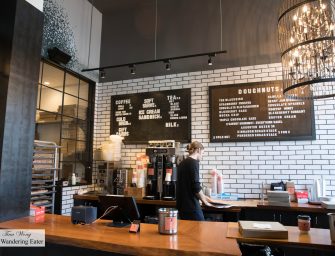 I’ve recently visited Boston last weekend meeting my dearest’s friends and see the hometown of Cambridge, Massachusetts (where we ended up eating and hanging out most of the time). This will start the series of posts related to this weekend trip. Artisan doughnuts is a huge trend that’s been going on the for the past few years. Boston is certainly not immune to it and have a few artisan doughnut shops springing up. One of the places we stopped by is Blackbird Doughnuts is located on Boston’s South End. It’s a small take-out shop outfitted with white brick walls, walnut..
eating outManhattan

The Doughnut Project (I’ll abbreviate the brand to TDP) is one of the newest doughnut shops in NYC in West Village at two months young. For someone who has eaten many doughnuts and in many cities, this jaded doughnut eater is actually excited for a brand that make very unique flavored yeast doughnuts. They don’t make the standard chocolate, vanilla or strawberry glazed doughnuts. TDP makes some quirky cool flavors that I will talk about soon. When you walk in their shop, it’s a very cool place with black wall with a vibrant graffiti style wall with small pretty chandeliers..
CanadaMontreal, Quebectravel

Montreal is sort of like New York City in regards to having very good to excellent third wave coffee shops. A few notable differences – they are truly indie shops and from a personal perspective as a New Yorker, it pains me to wait for good coffee at 9:00 AM on a weekend. Here’s a couple of coffee shops I’ve managed to visit during my stay in Montreal. Dispatch Coffee is arguably one of my favorite shops I’ve visited in a long time. Dispatch is founded by Chrissy Durcak delivering cold brew in mason jars before acquiring the truck that..
travelUnited StatesWashington, D.C.

I’ve come to realize during my trip to D.C. is the renaissance of artisanal doughnuts. Doughnuts that are meticulously made by hand and in small batches. Another great doughnut destination is found in the Metro-Downtown Center called Astro Doughnuts & Fried Chicken. THey are convenient if you are either giving your credit card a workout with the many department stores and shops in the area or if you’re working here since the business district is not too far from here. Astro Doughnuts is a storefront shop that sells nine flavors (when I was there) and during the late weekday mornings,..

Dough & Ramen Burger at Smorgasburg at the Brooklyn Flea

This past weekend, we had an intense craving for doughnuts and since the snow was holding off until later that evening, we made the trek across the East River to the Brooklyn Flea in Williamsburg and headed straight to Dough‘s stall. Dough does have a brick-and-mortar store in Greenpoint but it’s a bit of a trek for me to head out there. So, Smorgasburg is closest to get my doughnut lovin’ self to get their delectable sweets. These doughnuts were made by the talented hands of Chef Fany Gerson (yes, the same woman behind La New Yorkina). These dessert plate-sized,..
eating out

My dozen of Trou de Beigne Doughnuts This past weekend, I made a brief trip up to Montreal for a photography assignment for Complexity. Since I knew this particular trip was coming up, I asked around who makes really good doughnuts around Montreal? After some research and who had more flexible hours, I found Trou de Beigne. (Who knew Montreal are like the traditional French compatriots? Many shops close early on Sundays and not many open on Mondays.) Trou de Beigne is a premium, artisan doughnut brand that makes the freshest, tastiest doughnuts I’ve had in a long time. Anywhere...
Uncategorized

Donuts from Nickel Diner One of my best friends told me she’s flying out to Los Angeles to meet up with a few friends during the Easter weekend. Knowing how LA has a vibrant, interesting scene for donuts, I cannot resist asking her to pick some up for me and sent her a few ideas where she can find some. She happily obliged and went to Nickel Diner. (more…)