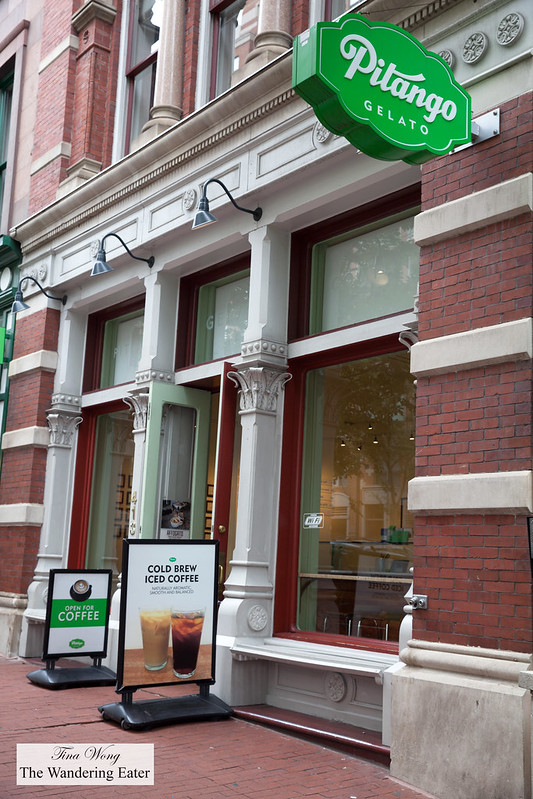 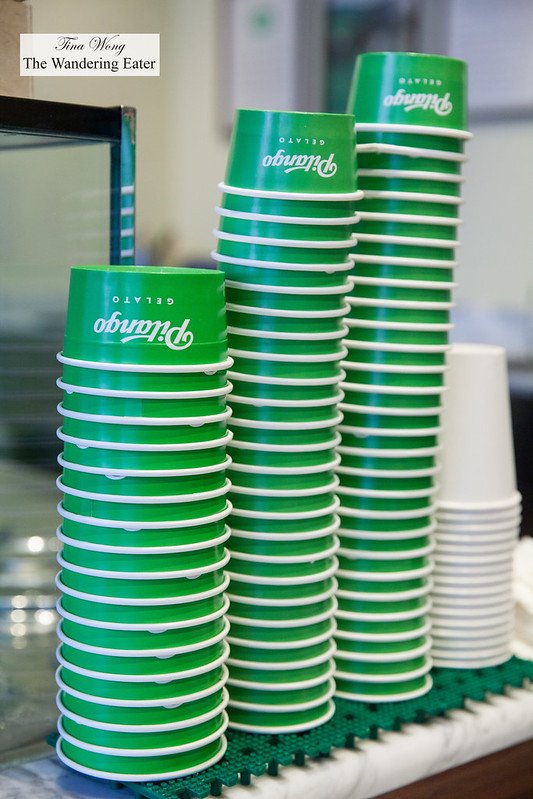 Pitango Gelato and its bakery (which I will talk about later) are a thriving small, family-owned business run by Noah Dan, truly believe in using the best, local (if possible), organic ingredients in their products. Pitango Gelato has multiple locations in DC, Baltimore, and Reston (in Virginia).

We visited the Penn Quarter location for our gelato Inside, the space is clean, with lofty ceilings, lots of wood tones and a delightful minimalism with just the right amount of pastel yellow to make it seem homey. 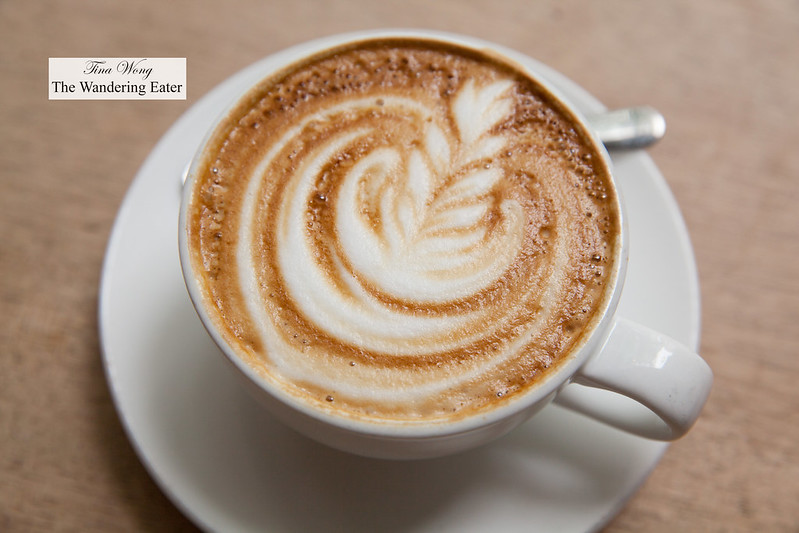 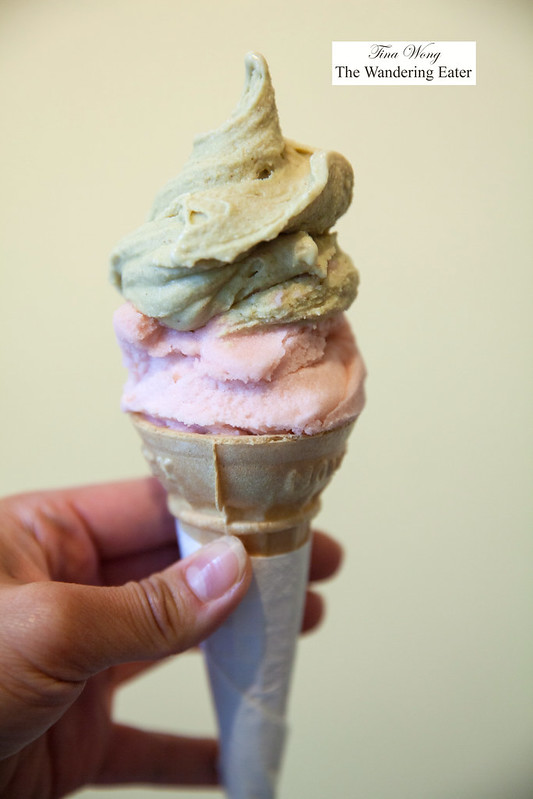 We all needed a caffeine kick and Pitango makes some really amazing cups of coffee and espresso based drinks. All of their beans for the gelaterias uses Counter Culture (one of the best coffee roasters in the U.S.). My cappuccino was fantastic. Well-rounded, chocolate-y flavors and melded with the sweet milk.

We had a tried a lot of their gelato and sorbets and learned that their fruit based gelati and sorbets use the actual fruit rather than a purée or fruit concentrate that some places might end up using. The raw milk used in the gelato are locally sourced from a small Mennonite farmer in Pennsylvania. They don’t use artificial colors, flavors, or stabilizers. 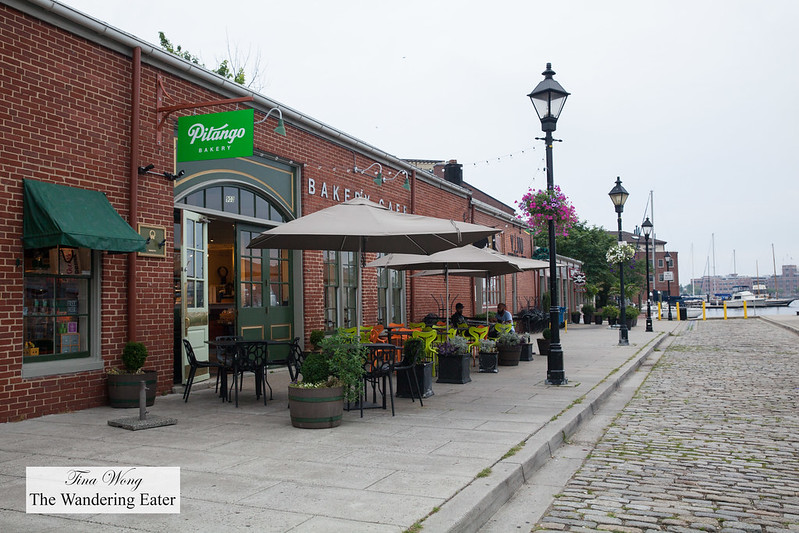 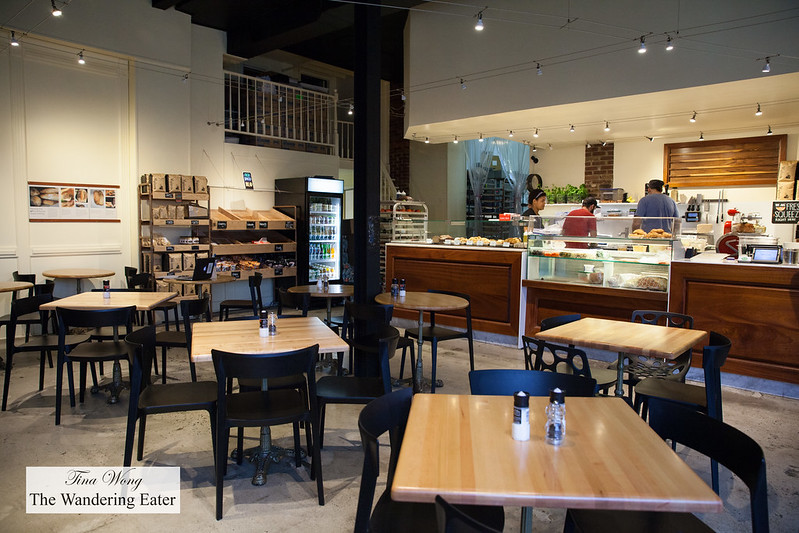 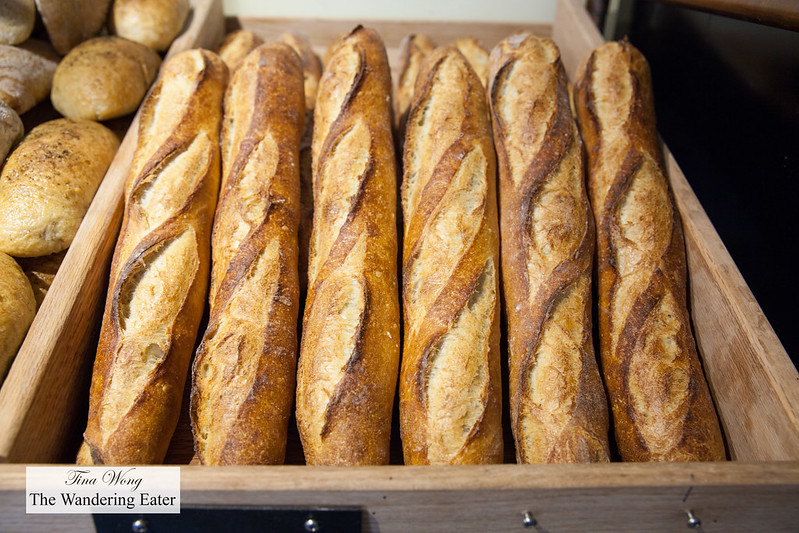 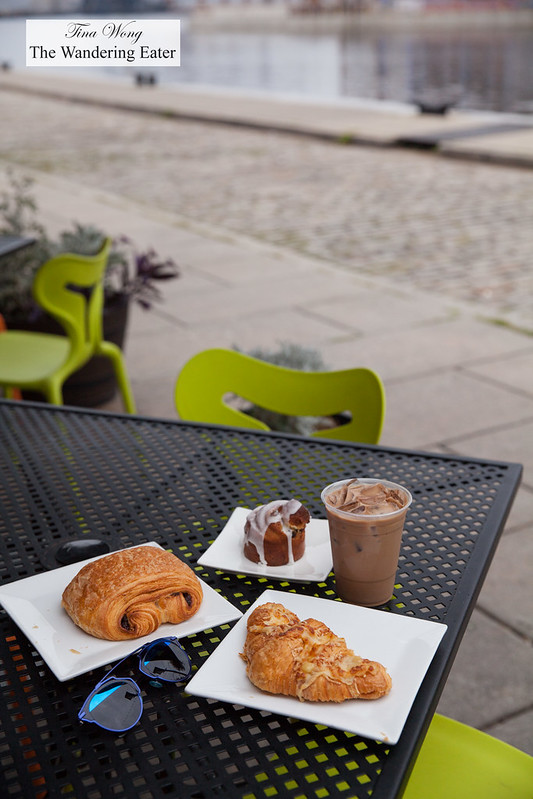 Another morning when we drove to Baltimore, we headed to Pitango Bakery & Cafe for breakfast. What is charming about this place is the location at Fells Point. It reminds me of what Williamsburg, Brooklyn was in its early times when gentrification really hitting its high point in during about ten years ago when it still had the artists and a few of the young professionals. The best part is the fact it’s on a pier and you can sit by the water and have whatever delicious sandwich/pastry/coffee/juice from the bakery. 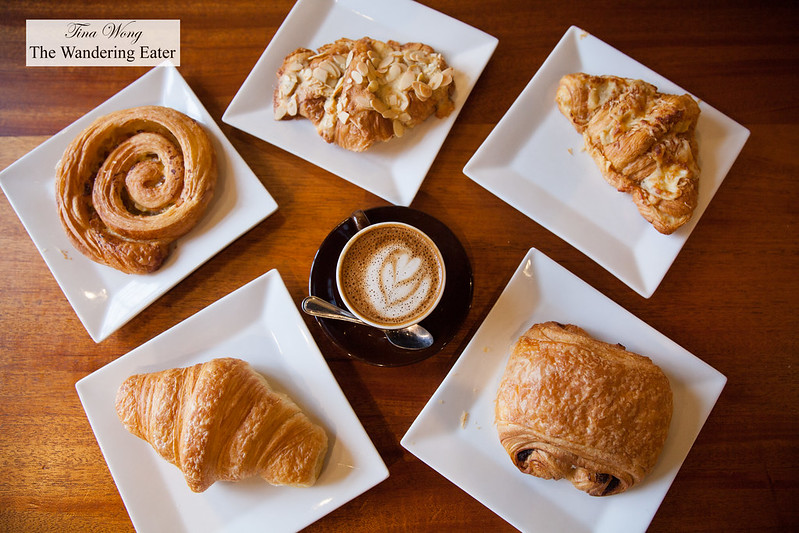 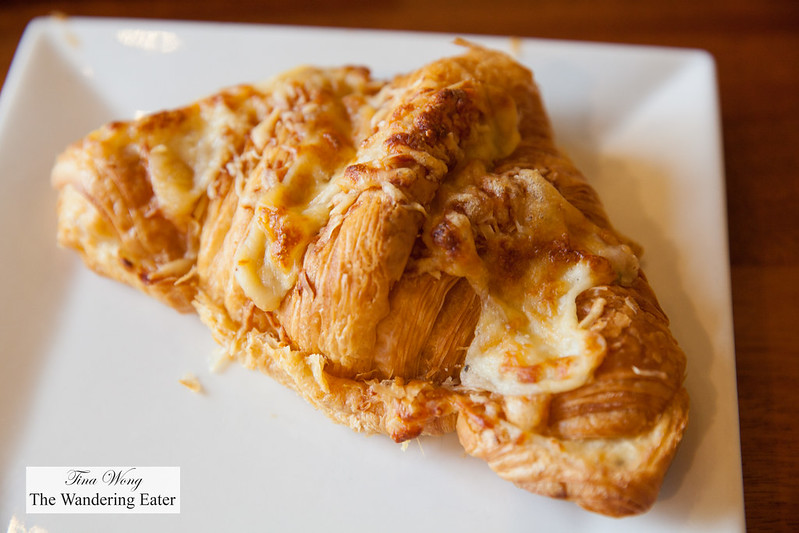 When it comes to the baked items from Pitango Bakery, their staff knows how to bake very well. The pastries ranging from croissants (traditional to savory and sweet) were deliciously buttery, flaky and had packed with flavor. The rum raisin pinwheel was not too sweet and wonderfully flaky as well. 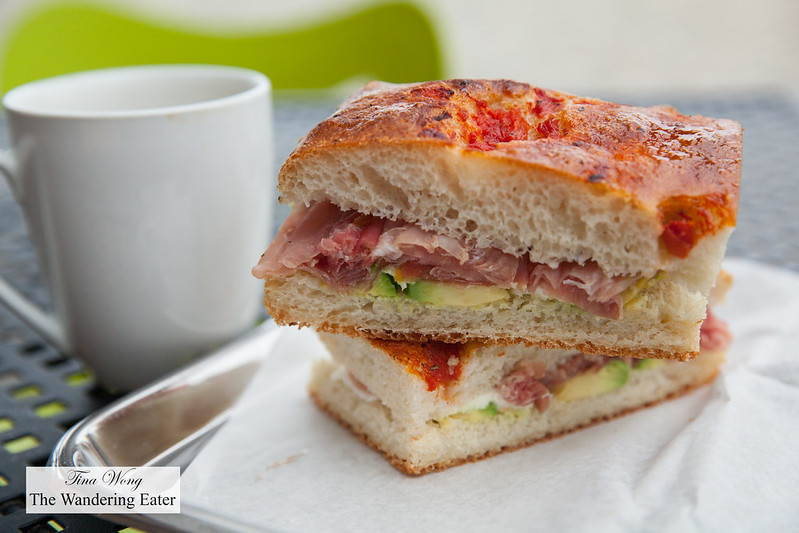 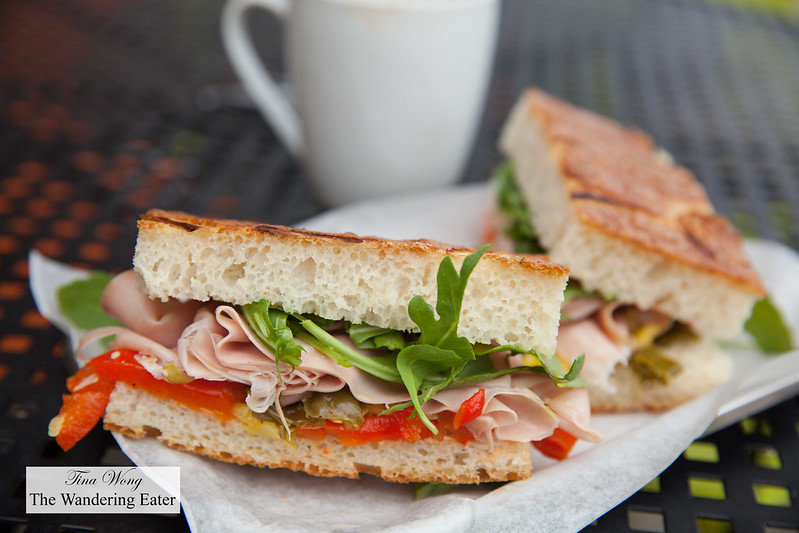 Sandwiches are made to order here and they use the fantastic in-house baked focaccia to build on it. We had the prosciutto, avocado, fresh mozarella sandwich made with the tomato focaccia and the mortadella, pickled peppers and arugula made with the rosemary focaccia. Both sandwiches were sublime. A great balance of flavors between the meats, vegetables and the condiments and the focaccia was sturdy enough to hold the contents and had a great, springy chew. 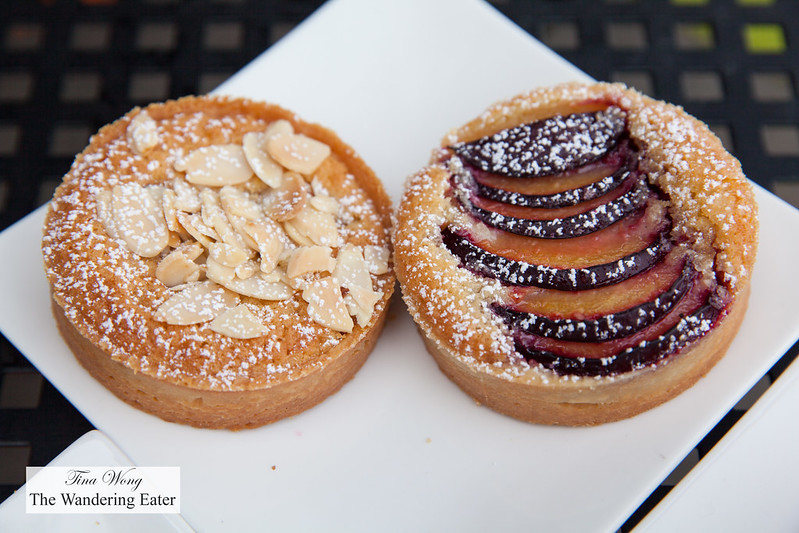 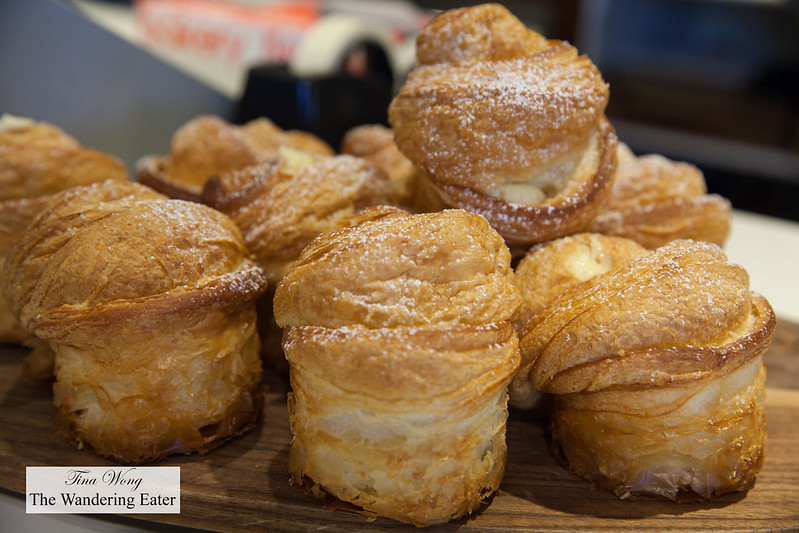 The pastry baked goods like tarts were both beautiful and delicious. The fine tart crust was crumbly and buttery while the custard/cream was decadent without being overwhelming yet let the beautiful seasonal fruits shine. If you happen to see a plate of cruffins, a hybrid pastry of a croissant and muffin, filled with vanilla custard you should get one. It’s decadent and worth every calorie consumed and needed to be burned at the gym. 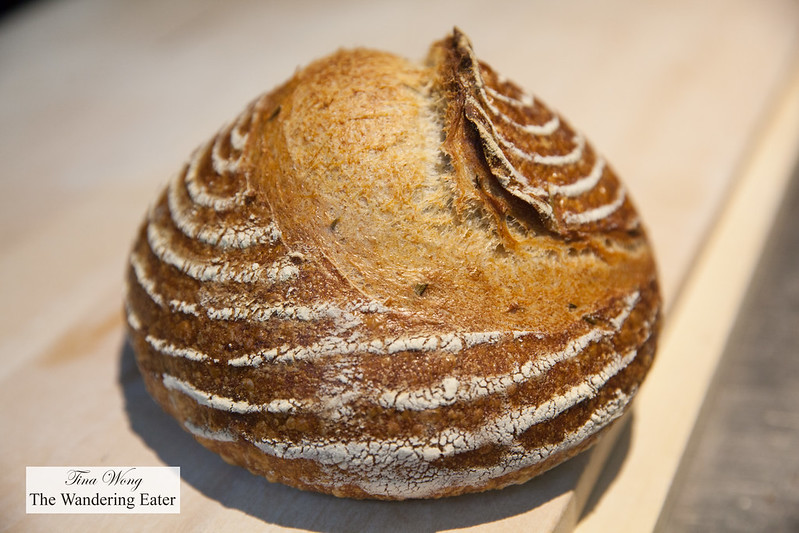 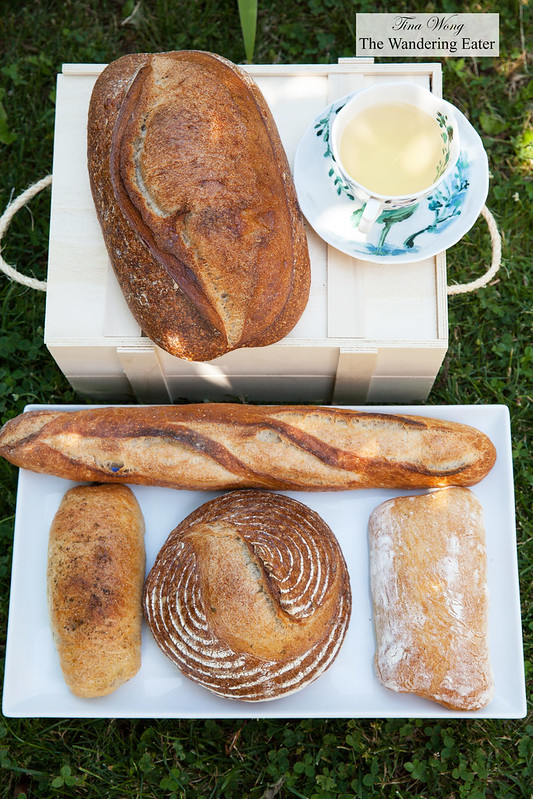 When it comes to their loaves of fresh baked bread, it’s simply excellent. All have their appropriate hydration levels, wonderful crumb and great thick crust. Once in a while, they will bake a few special loaves like the lemon rosemary boule that has an amazing aroma of the two flavors and it first tasted like earthy lemon initially then the rosemary kicks in while chewing on the bread. It’s very unique and I wouldn’t do much with this beautiful bread except maybe add a schmear of butter or a swipe of fruity olive oil.