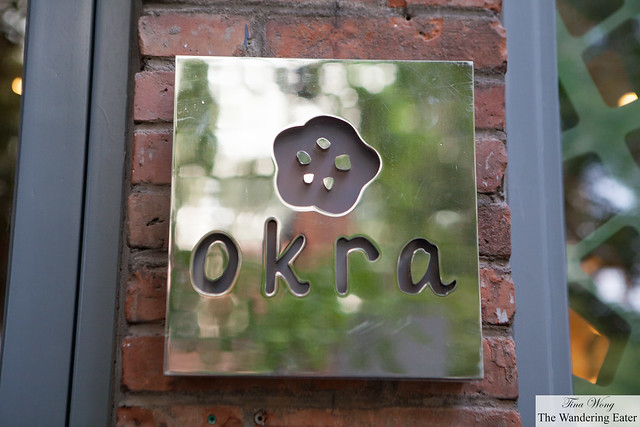 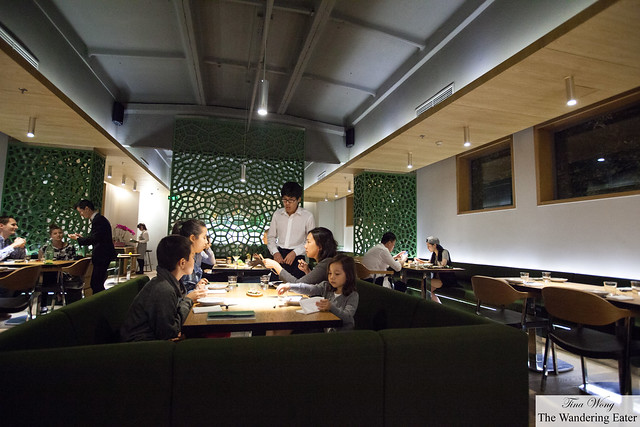 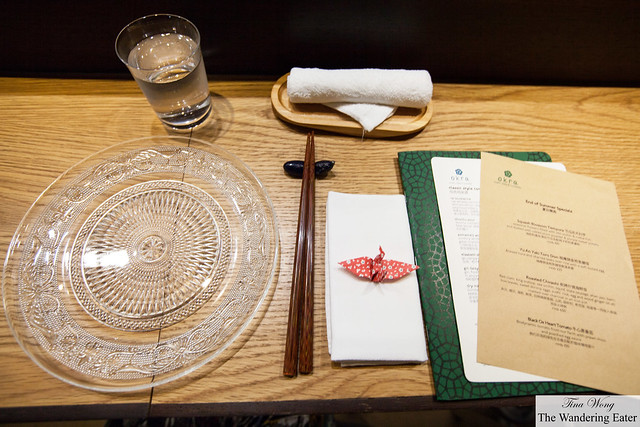 Okra is one of those few restaurants in Beijing where you have to find your way to your meal. Not too far fetched like going to Temple Restaurant Beijing (TRB) but instead of walking down the somewhat sketchy, old school hutong, you would be walking around a maze of slick glass, steel and concrete skyscrapers that look like corporate businesses. When you do find a security guard right outside sitting on a corner of an entrance to a walled entrance to what may be another cluster of buildings, that is where you should be — The 1949 Hidden City Complex.

You’d first walk through an art gallery and find yourself in the middle of an open courtyard that has a group of restaurants surrounding it. Okra is located on the second floor. Polite, warm greetings from a few staff members and you’ll be seated accordingly. We reserved seats for the bar, since we are at one of the rare, serious Japanese restaurants in Beijing. Chef Max Levy cares about the food he serves; if it’s not good, he won’t serve it. He also informed us that despite everyone says that Japan has the best seafood, you shouldn’t overlook what China has to offer. 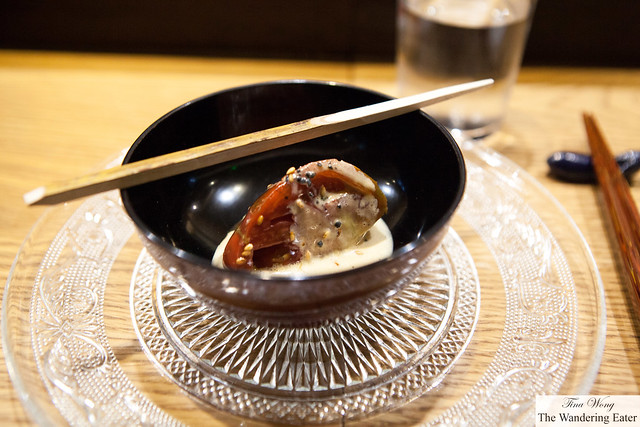 We ordered the omakase (RMB 450 per person). Since it is considered late summer in Beijing when we dined, we started out with a very sweet heirloom tomato in a creamy tuna sauce. A mix of sweet, slightly salty and creamy. It piqued up our palate for the next courses. 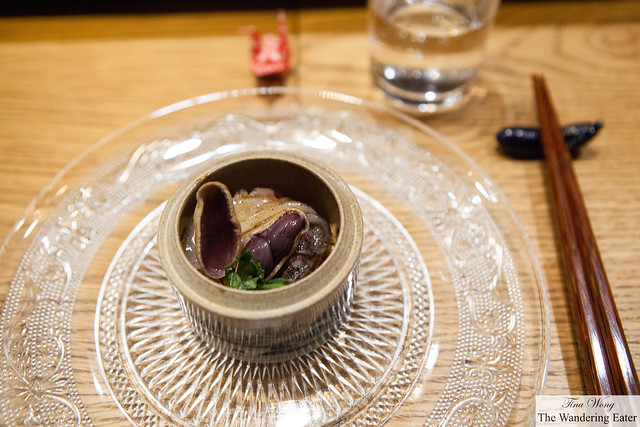 Next up were a small ceramic bowl of cuttlefish sliced up into noodles topped with fresh shiso and a boiled peanut. This was pretty interesting with the cool, chewy, gently spiced cuttlefish mixed with the refreshing shiso. The earthy peanut tied the flavors nicely. 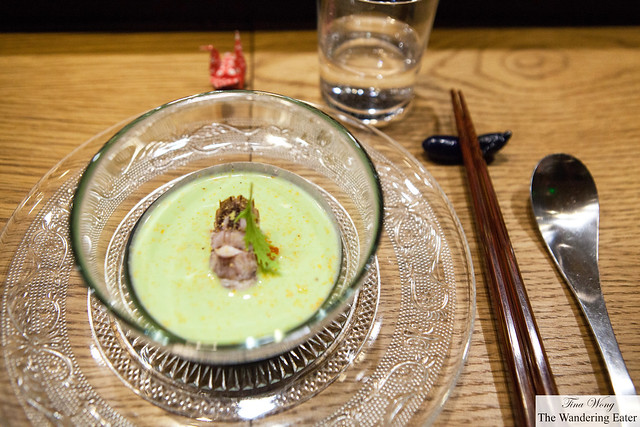 We were presented with a small mound of smoked uni topped with a cooked, seasoned praying mantis shrimp then poured table side the silky cold edamame soup. This soup was delicious. Vegetal, slightly earthy sweet soup paired wonderfully with the lightly smoked uni and sweet shrimp. I wouldn’t have mind eating multiple bowls of this soup. 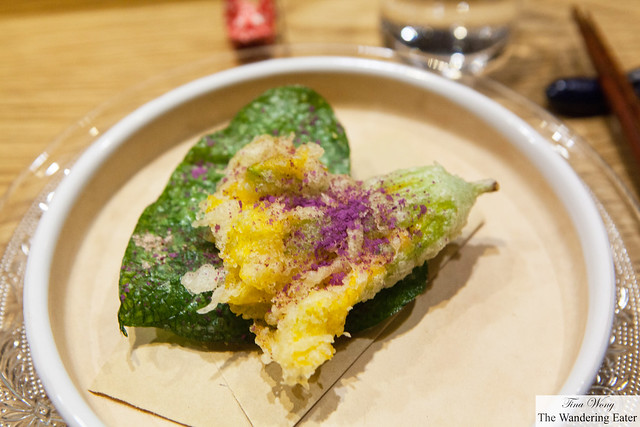 One of the most intriguing dish of the evening was the tempura of towel squash blossom stuffed with shrimp and uni, towel squash leaf dusted with ube powder. This sort of tasted like a zucchini blossom but much lighter and cleaner tasting. The stuffing and ube powder profoundly enhanced the sweetness of the dish. 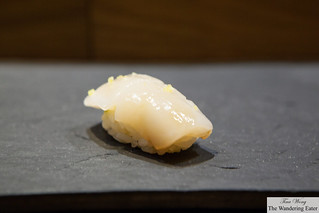 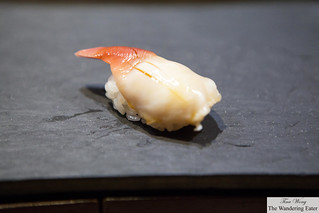 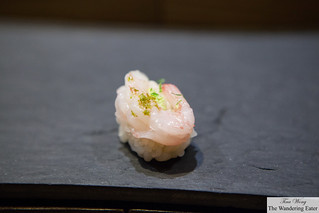 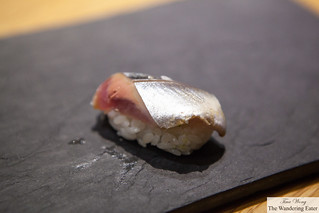 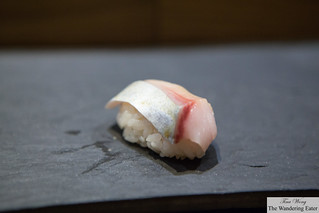 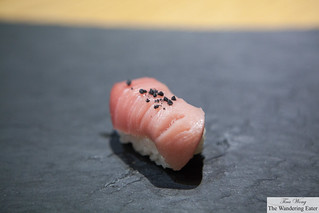 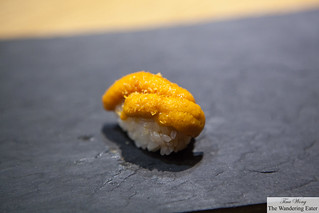 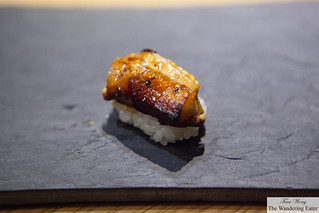 We were served a smattering of eight beautiful sushi that is leaned toward sweeter side of savory but they were very tasty. All the nigiri have a delicate layer of wasabi pre-spread between the fish and rice; a gentle brushing of soy. The rice was nicely textured and not acidic. The fish Levy chose to serve us were wonderfully pristine. My personal favorites of the bunch were the seki saba, a wonderfully pristine, oily mackerel, and the sweet ebi (shrimp) topped with fresh grated wasabi, and a nicely fatty chu toro (medium fatty tuna) topped with sesame. 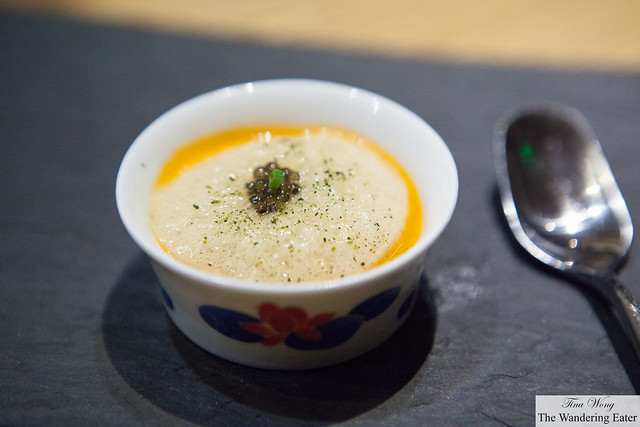 Progressing on, we were served an intriguing, modern soup of gazpacho dashi, seawater foam, topped with osetra caviar from Szechuan. It is a slight technique to the molecular cooking technique to have the foam but it does not detract from the sweet, slightly peppery and tomato flavors of the soup. The caviar added a beautiful punch of brininess as an end note. 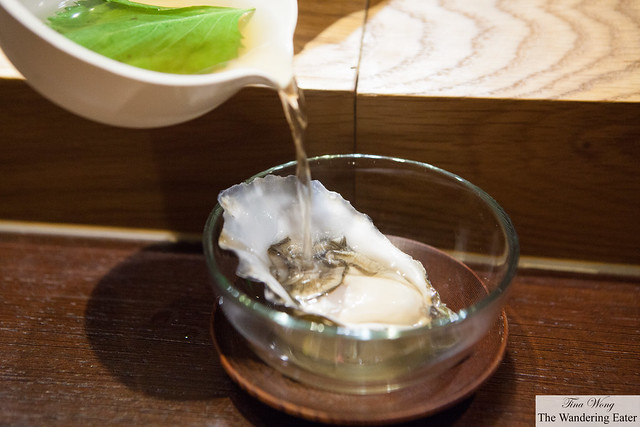 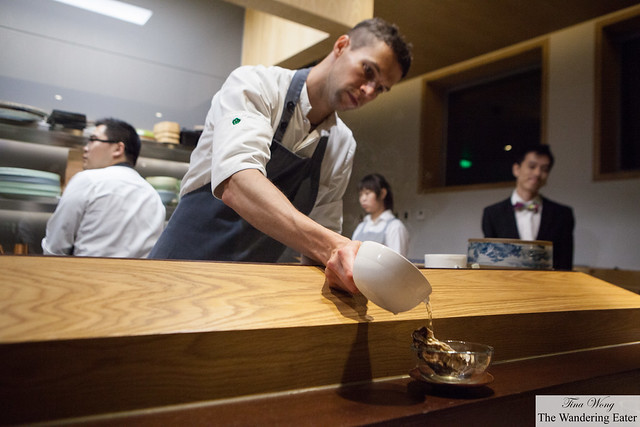 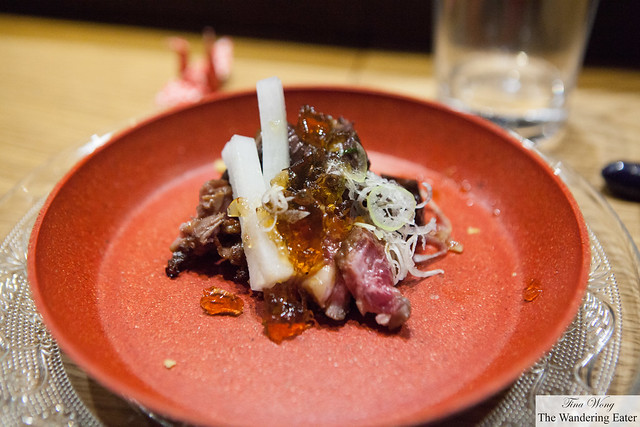 The dish that capped off our savory courses was an incredibly tasty tuna cheek and rib. The red fish meat was just kissed on the grill, so the tuna was still silky and tender but absorbed a hint of smoke. The sweet soy sauce gelatin added some sweetness and the sticks of daikon added some fresh crunchiness. 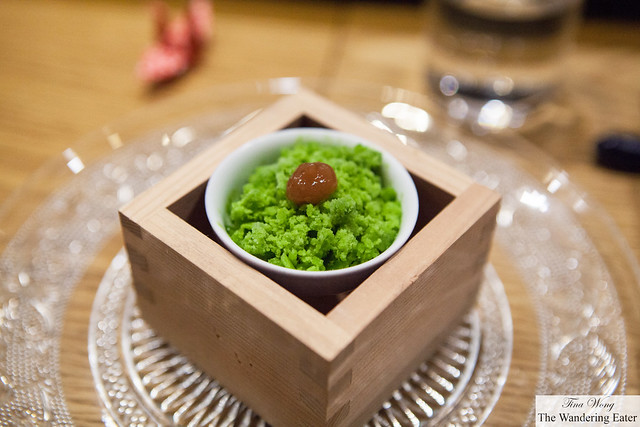 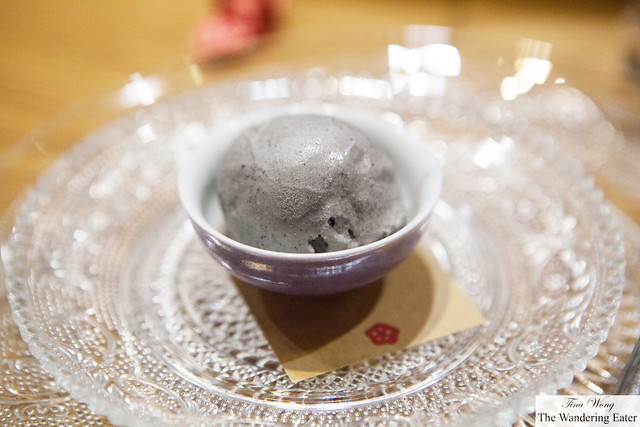 Wrapping up our meal with a pre-dessert of frozen shiso topped with salted plum cleansed our palates. The touch of salted plum mixed with the icy shiso granita was unusual but worked nicely. Our dessert was simply a scoop of black sesame ice cream. Except this was an intensely nutty, wonderfully dense ice cream.

This omakase was very good. The seafood was fantastic. The rice for the sushi was very good (nice firm grains and not vinegary). The cooked dishes were pretty creative in regards to flavor pairing and it was great.

Okra is a game changer to what Beijing normally associates with sushi. Chef Levy tries to push the ideas to the locals that very good sushi doesn’t have to have seafood flown in only from Japan. Japanese food does not have to be large sized courses to feel satisfied.