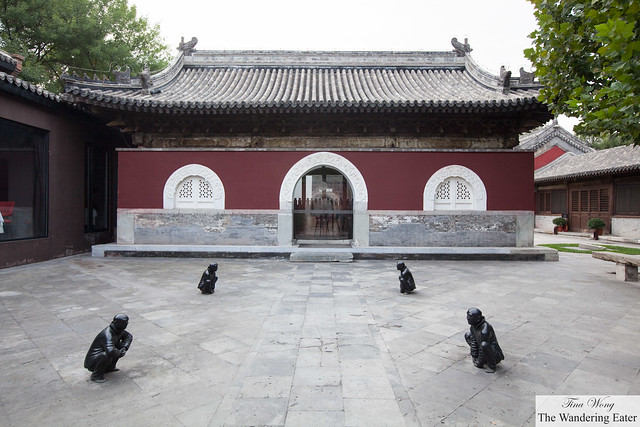 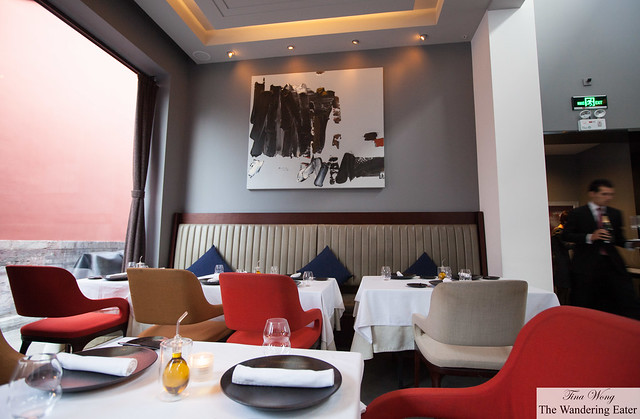 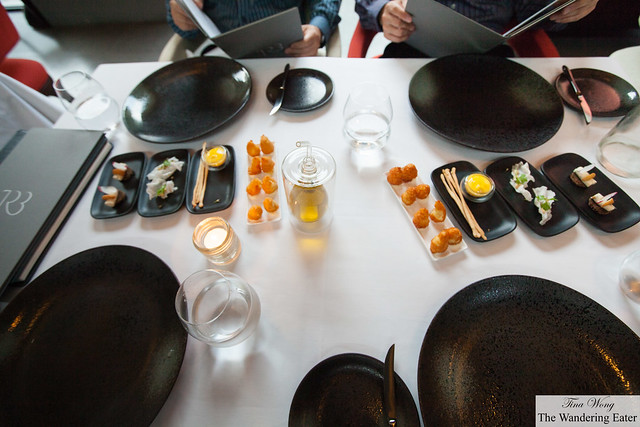 Entrance to TRB; View on my right from where I sat; Our amuse bouches

Very recently, my family and I went to China, specifically the cities of Shanghai, Xi’an, and Beijing, for two weeks to see (and taste) the sights of those three cities. Our eyes were opened by the varying locals who reside there. The way they dress and carry themselves. The feel and look of each city is so distinctive even though they are about a two-hour flight away from each other. We have walked (sometimes hiked) a lot, seen a lot, and without a doubt, ate a lot.

One of our memorable meals in Beijing was at Temple Restaurant Beijing (TRB). TRB is an elegant, upscale European restaurant that is unique mainly because of its location in a 600-year-old Buddhist temple complex.

It’s not far from the Forbidden City and you would have to walk down a long Beijing hutong called Shatan Beijie. We felt puzzled and lost walking down a relatively sketchy but lively, narrow street in a cocktail dress (dress shirt and trousers or a suit for a man). To explain briefly the latter, our taxi driver didn’t want to drive us in because that street barely fit a car. When we arrived to the end of that hutong, we saw a beautiful white wall and the noise dimmed dramatically. We met a big but impeccably dressed man in a suit who looked at our bewildered faces and stated, “Here for Temple?” and quickly escorted us over to this open, beautiful courtyard that led to the entrance to TRB.

TRB opened November 2011. This restaurant juxtaposes old and nouveau Beijing in both ambiance and flavors. The menu is heavily French-inflected but it incorporates local elements as well. Ignace Lecleir, the owner of Temple who is originally from Belgium, previously worked at the New York restaurant Daniel, and then opened Daniel Boulud’s short-lived Maison Boulud in Beijing. 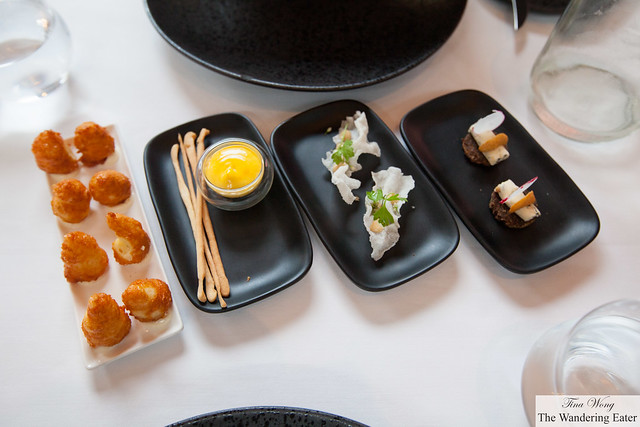 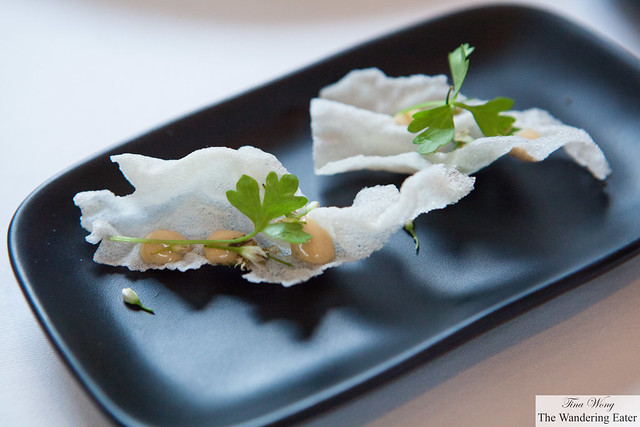 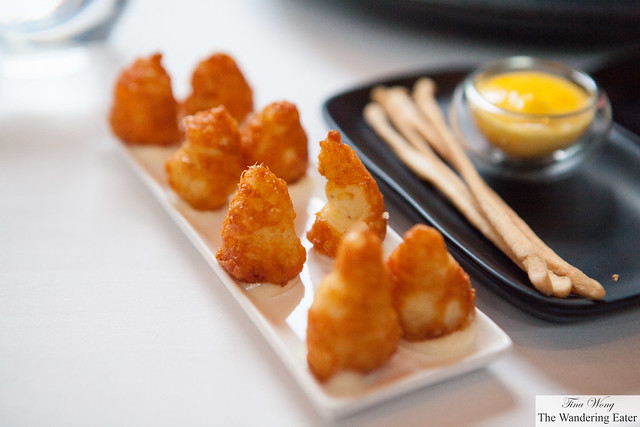 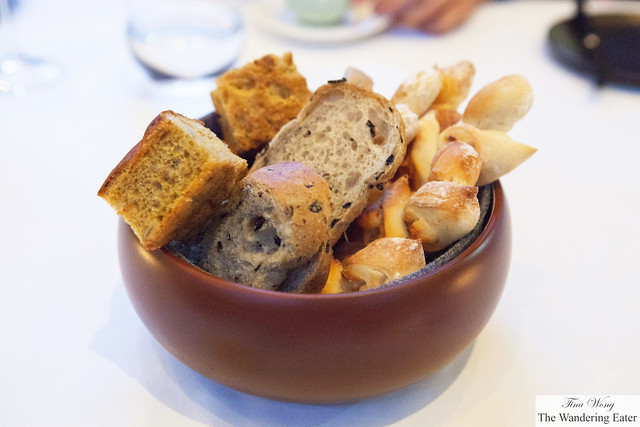 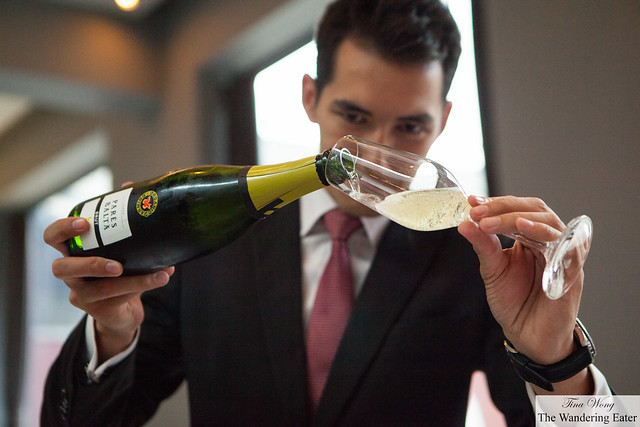 The Boulud influence is quite evident. Service is impeccable. Delightful details like airy gougères, the ethereally crisp but potent rice chips topped with umami rich anchovy mousse, and an impressive selection of house-made breads at the table. We were greeted with glasses of crisp Parés Balta Cava as well as pairing our amuses and first course. 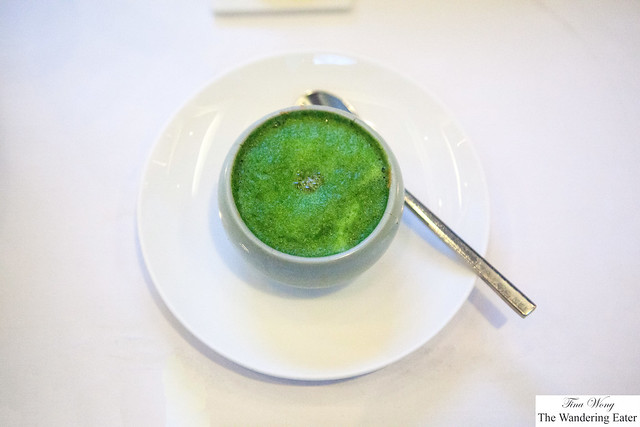 We were graciously offered an off-menu tasting menu. We started with a small cup of lobster mousse topped with basil emulsion. It tasted like a chilled, sweet lobster broth with a chunk of sweet fresh lobster topped with a cap of basil foam. Balanced and refreshing. 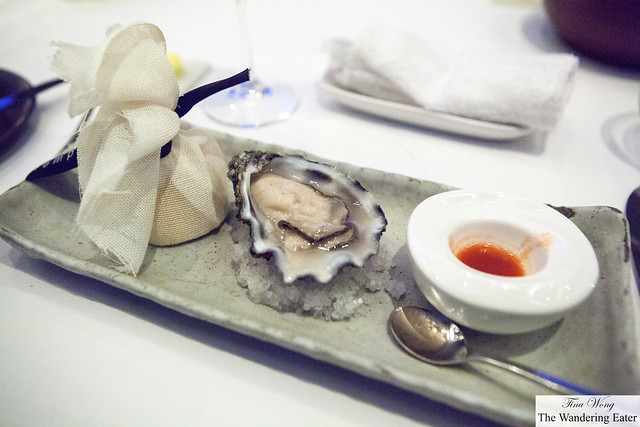 Next was a shucked French oyster, served minimalist with a side of fresh lemon and a fanciful bowl of Tabasco sauce. It was good and simple. 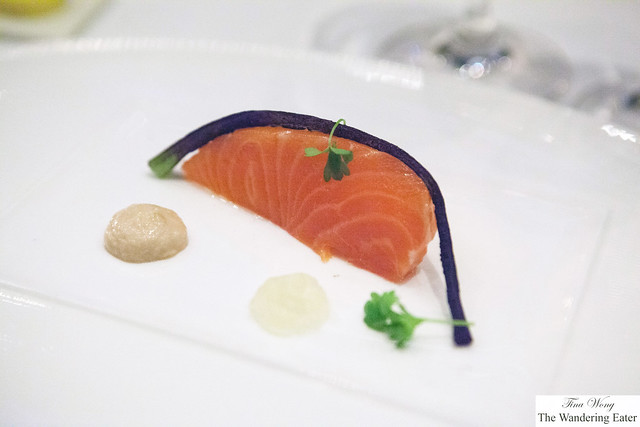 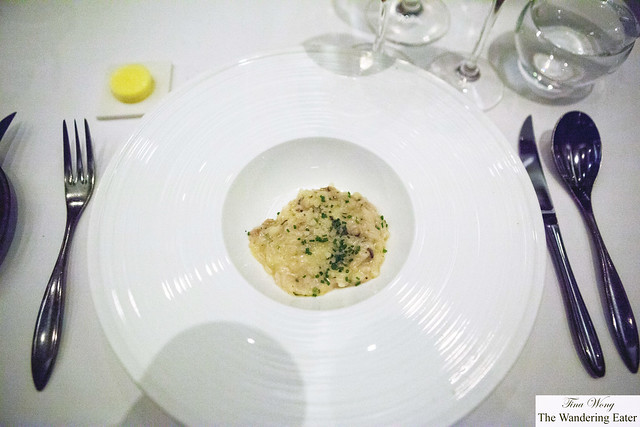 The truffle and mushroom risotto topped with chive oil was very tasty. The risotto had the velvety, creamy texture with fine dices of mushroom and the chive oil gave it a refreshing zip that prevented the dish from being too heavy. 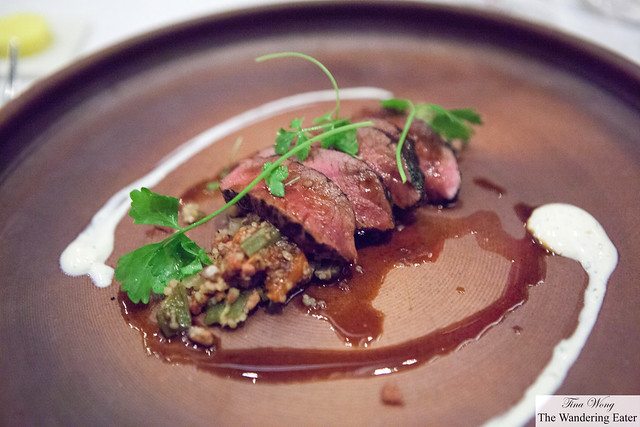 Our main course was roast lamb on a bed of vegetable couscous. This dish was my favorite as it’s flavorful and hit all the notes I hoped for in a dish like this. Tender slices of lamb; the roast vegetables and couscous were perfect foil. The sweet vegetables were marinated with a touch of vinegar to cut the richness of the lamb and the couscous was nicely cooked. 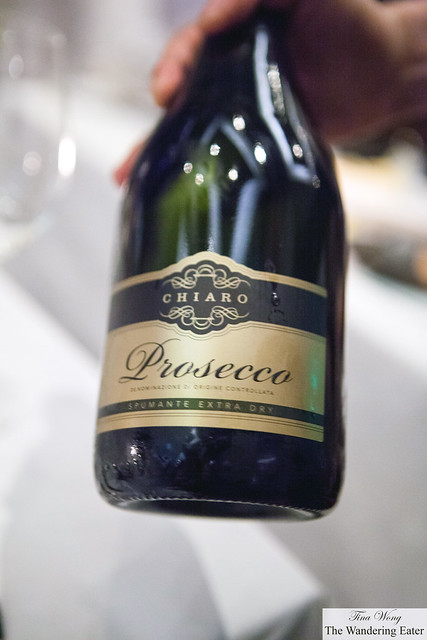 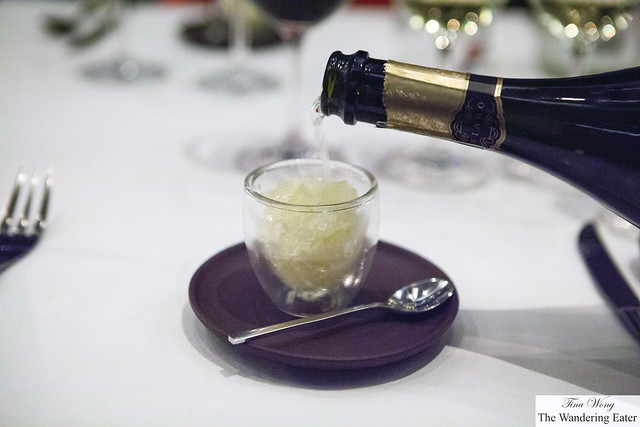 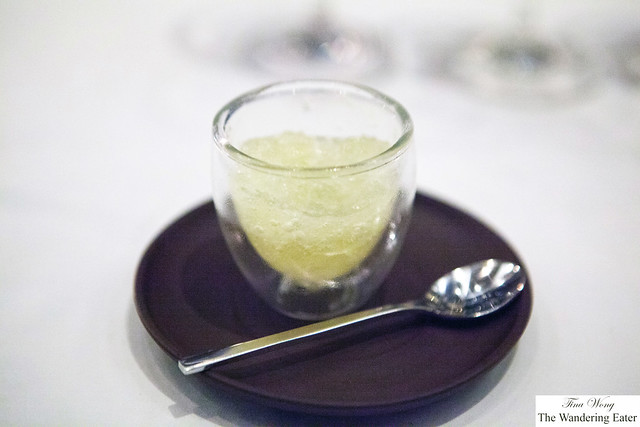 Pre-dessert was lime basil granita topped with Chiaro Prosecco Extra Dry. This delightful, classy slushy was a great palate cleanser and the sweet edge from the granita prepared us for dessert. 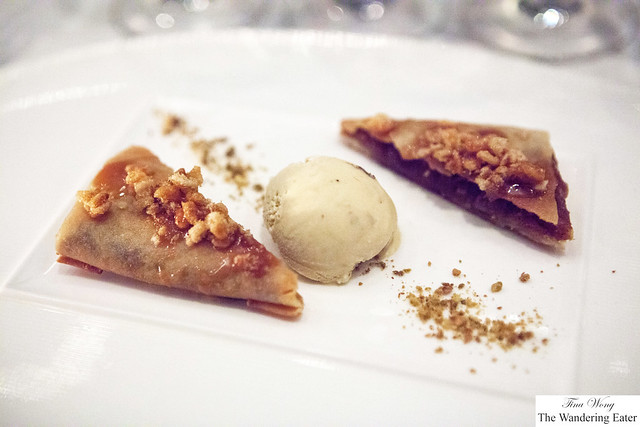 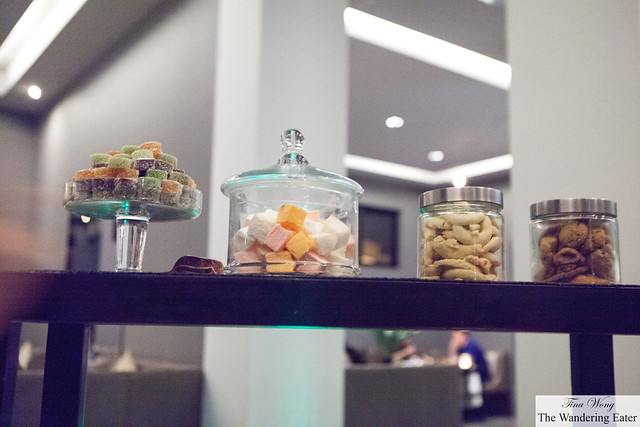 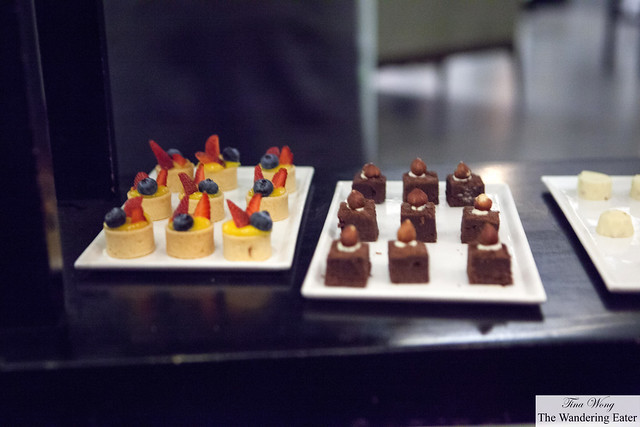 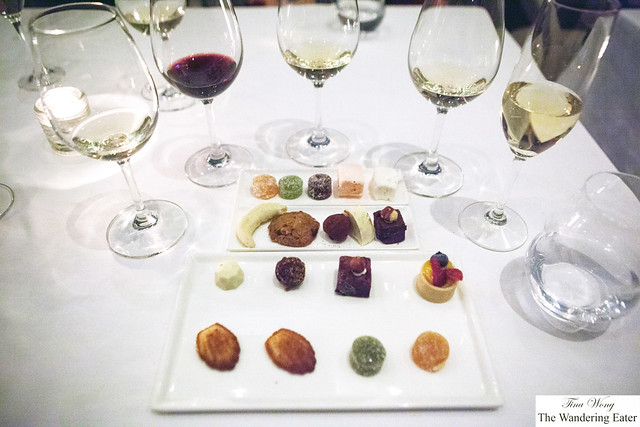 In case we still felt hungry or not enough dessert, the restaurant wheeled over their petit four. My mother acted like she’s a kid in a candy store when she saw the jar of pastel fresh marshmallows. We had one of everything ranging from miniature madelines, fresh marshmallows, bonbons, and miniature fruit tarts. They all made a sweet ending to a very solid European dinner. 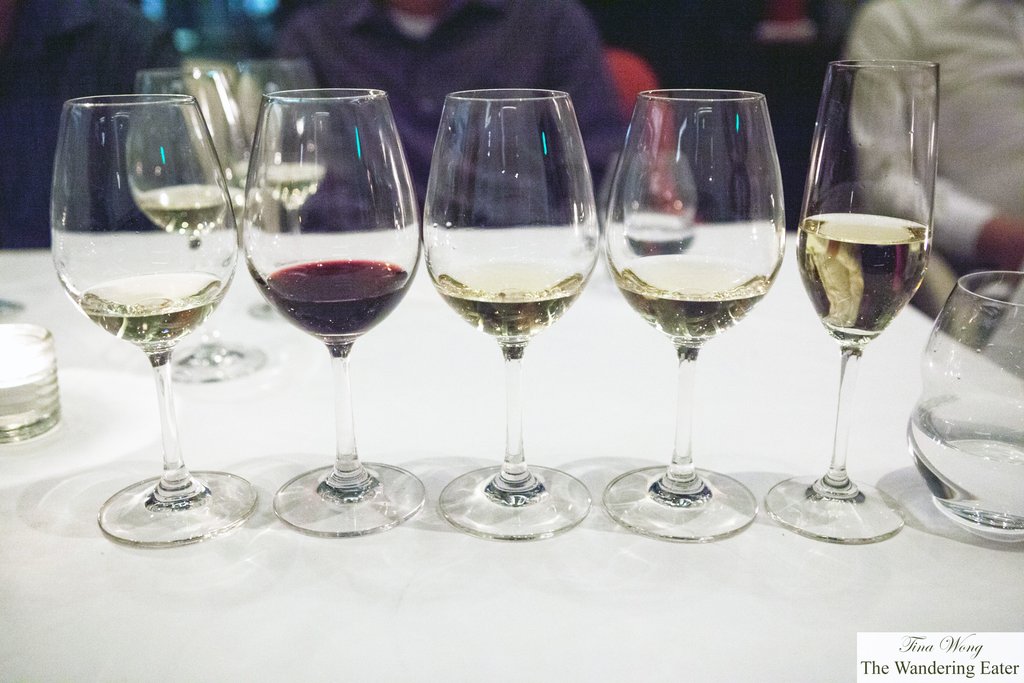 I should note, we had all of our courses paired with a glass of wine (as seen above; tags indicate the name of the wines and the course paired). The pairings were thoughtfully paired and does enhance the dish accompanying the wine.

We left the restaurant very content with the meal and experience. Despite the fact my family and I live in New York City, a city filled with many excellent European restaurants, TRB stands out for its unique setting that we certainly will not see at home.

To view more photos of this meal, please CLICK HERE or view the gallery below: