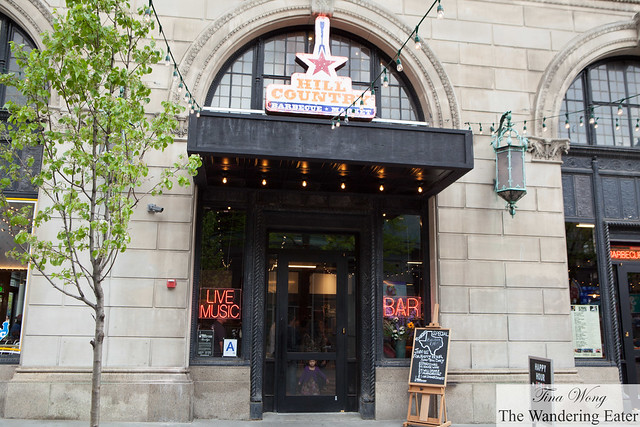 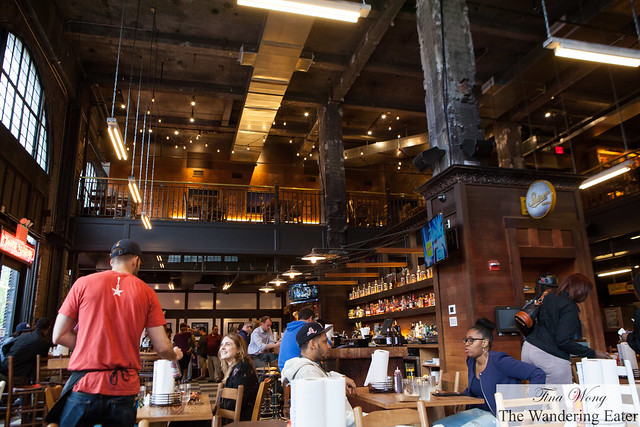 What I like about Hill Country Barbecue is the fact it’s very good Texas-style barbecue. Their signature item is the moist (in other words, fatty) brisket and as an omnivore with carnivorous leanings, you must get that or you will regret it. The brisket has the desired bark (the thin layer of encrusted spices due to long hours of smoke), the pink-red ring underneath and the fat cap on top of the luscious smoked beef. Oh, it’s divine! 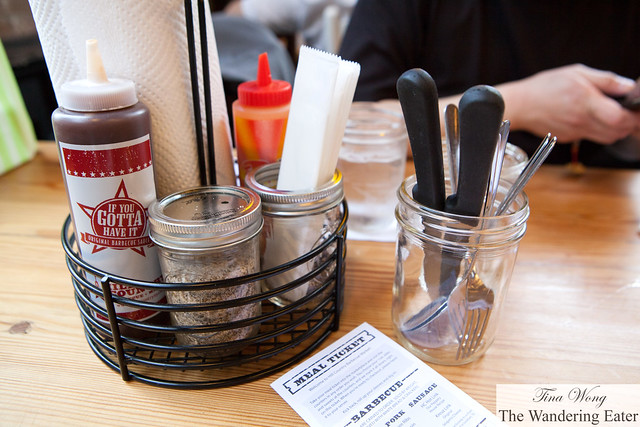 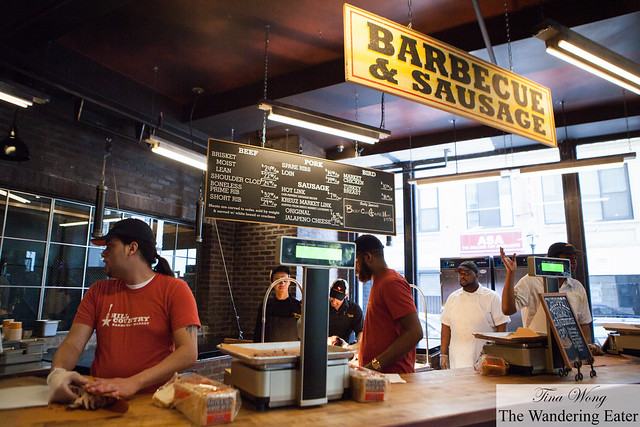 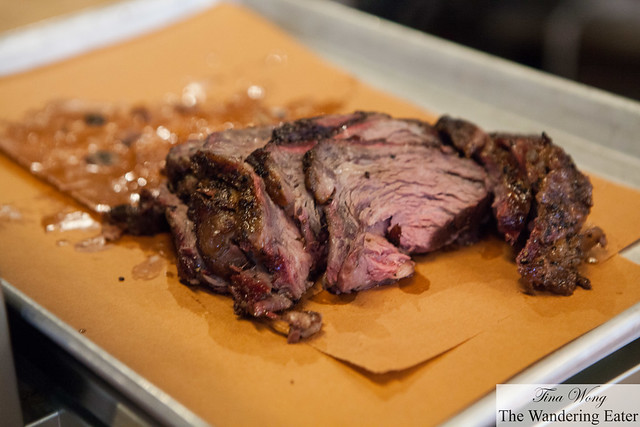 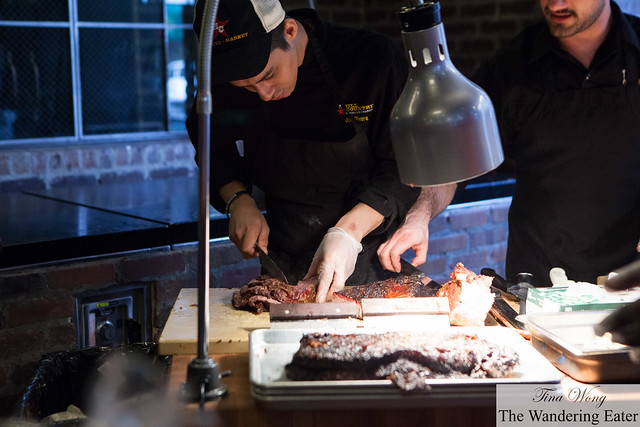 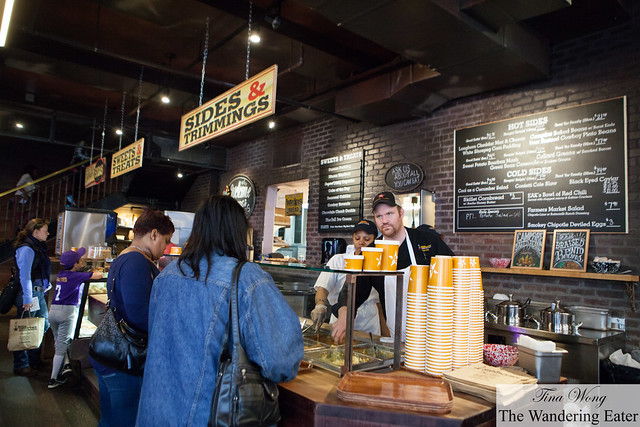 The restaurant has the same feel as the one in Manhattan on West 26th Street but much larger. Comfortably rustic wooden floors, tables and chairs with a large second floor with a bar upstairs. When we were seated, we were given meal tickets with our table number. What protocol is, you take your meal ticket and walk up to the appointed stations or counters for your smoked meats, sides and desserts and pay on the other end once you made your walk around. At the smoked meats counter, a worker with a long knife tears off a sheet of brown paper and proceeds to bury it under slabs of meat.

Here’s what we ate: 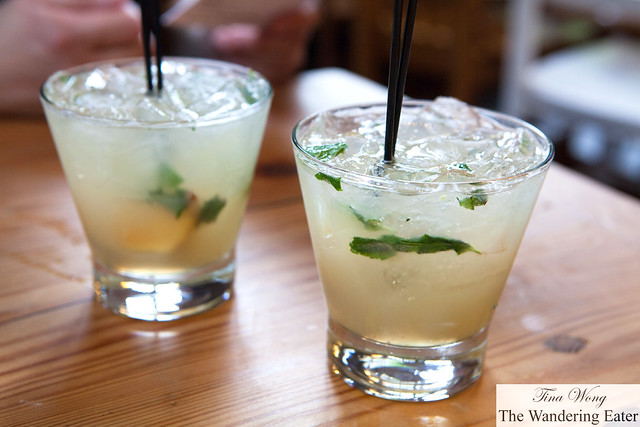 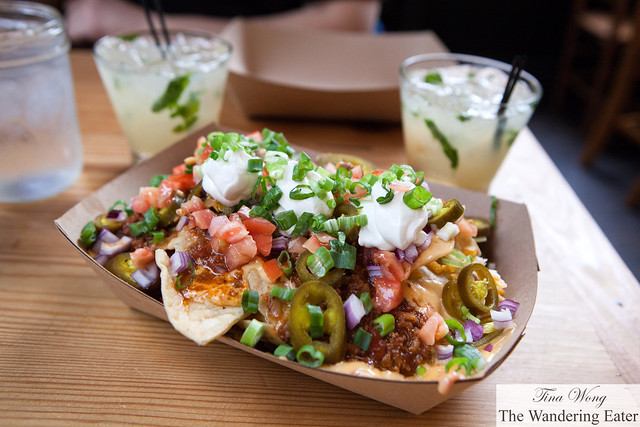 Since Cinco de Mayo is coming up, the restaurant is serving up specials like the smoked orange margaritas and chili nachos.

The nachos are composed of homemade tortilla chips smothered with traditional red chili, rich Texas queso, Longhorn cheddar, red onions, sour cream and pickled jalapenos. It’s hard to stop eating those nachos and I hope the restaurant considers making this permanent since it tasted so good. It’s my second favorite thing to eat besides the moist brisket here. It’s really that good. The margaritas were a great refreshing drink as a foil to the heavy nachos, especially when you get to the end of your drink and bite that smoked orange on the bottom of your cup, it adds another layer of sweet, smoky freshness (besides the fact it’s absorbed the wonderful liquor). 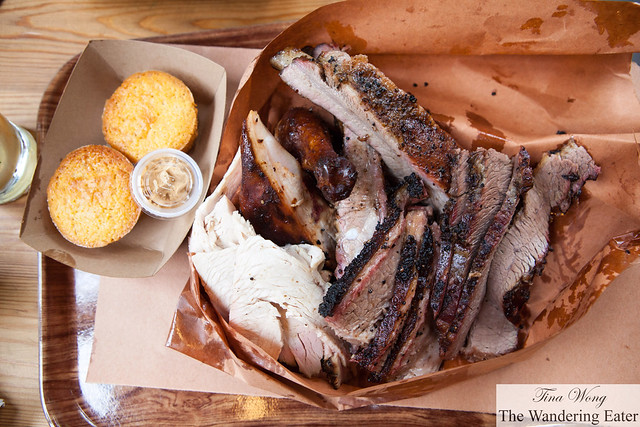 Our first assortment of smoked meats were turkey, chicken, lean and moist briskets, and spare ribs. All the meats were moist, considering the fact they were slowly cooking away in a smoker. By default, the moist brisket always win my heart and stomach. But the leaner meats like turkey and chicken actually fared well and taken in some of that wonderful hickory smoke besides its own dry rub. The spare ribs were so tender that you could easily separate the bone from the rest of the meat (that’s a very good thing).

The meats didn’t require any additional sweet, smoky barbecue sauce (the restaurant does provide and sell it) or the dry rub (my friend kept adding a few shakes of the salt, black pepper, cayenne, and other spices mixture on everything he ate) but you have that option.

The side of cornbread was very good. Not too buttery and it’s pleasantly sweet. I liked the spiced butter to add more richness as well as making it more savory. 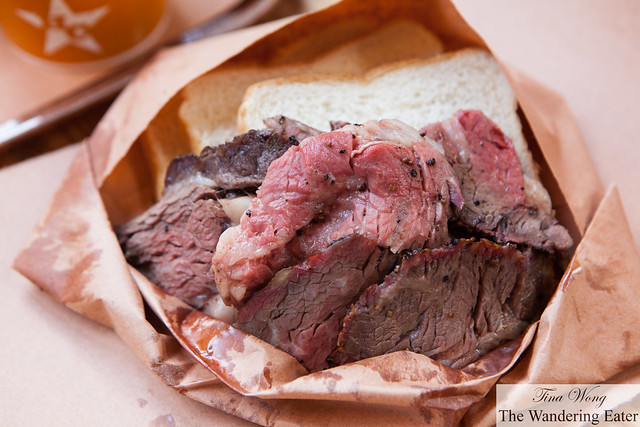 There were a special of the evening of sliced prime rib that was delicious. Nicely coated in a peppery, dry rub and smoked until it’s medium-rare. The cut is nicely fatty and luscious, as expected. The best parts after eating the prime rib is the soft white bread absorbing the delectable meat juices dripping out. 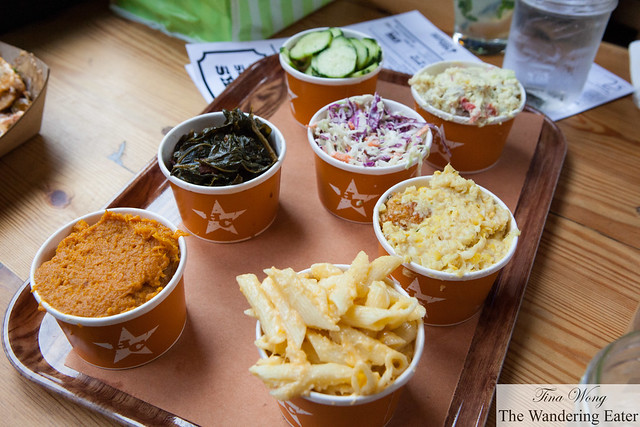 Our favorite was the collard greens as it’s cooked down until it’s insanely sweet and soft. The corn pudding was made me think of summertime corn on the cob except it’s in a creamy, denser form. The cucumber salad was the necessary refreshing element as it’s sweetly pickled enough to cut the rich meats we had. The sweet potato mash was tasty but it’s sweet enough for my palate to think of dessert than a side. 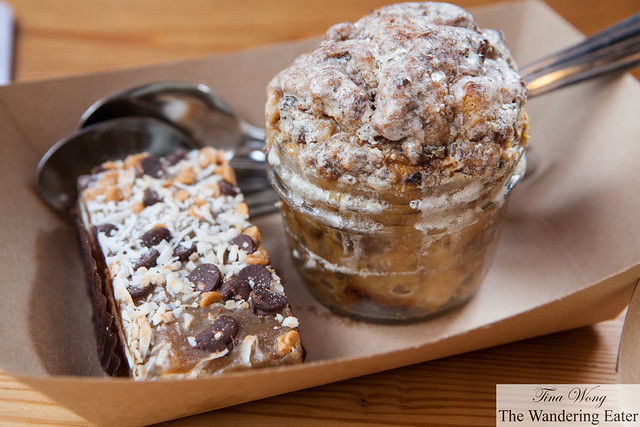 We managed to make room for dessert, despite the fact we’re almost in a food coma state. The cowboy brownie is a sweet and salty dessert. It’s a shortbread cookie bar layered with caramel, chocolate chips, butterscotch chips, and coconut flake. I liked this dessert since doesn’t feel on the palate as rich as it sounds.

The sweet potato bread pudding was served in a small Mason jar, warm. I admit I’m not a bread pudding fan but I’ll make an exception for this one since this one is not too spongy in texture and it’s delicate with the cinnamon. The sweet potato was the overarching flavor and there was certainly a very fair amount in there. 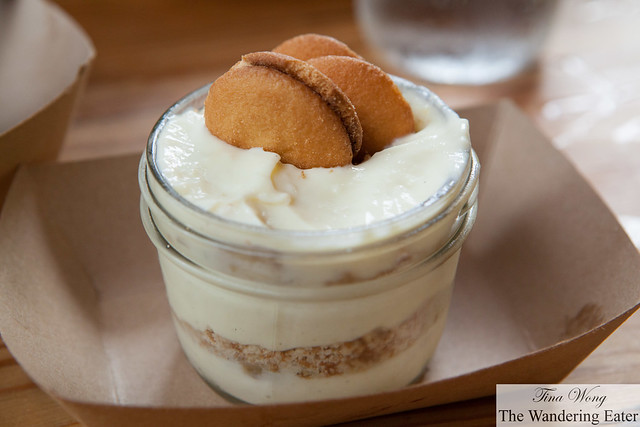