I’ve went to Union Square twice today. Yeah, twice. The first time I was deprived of energy that I had enough time to go down there and hope to get a cup of coffee from my favorite joint, Joe. Unfortunately, it was 6:50 AM and they don’t work the same hours as Starbucks, so it was a lost cause.

Anyways, after suffering without coffee until 11 AM, I practically sprinted out of class, to the subways and down back to Union Square. A 20 minute commute (those of you who don’t know where John Jay is, it’s at 10th Ave and W 58th St.), that took a chunk off my lunch time. I chose to eat at Tisserie, yes again. 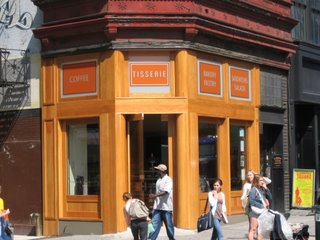 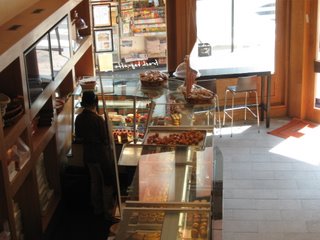 I wanted to try a different flavor of quiche. So, I ended up choosing the salmon quiche ($5) and out of spontaneity, a chocolate chip cookie ($1.50), ending up costing $7.06 with tax.

Well, obviously I ate my entreé, the salmon quiche. It con 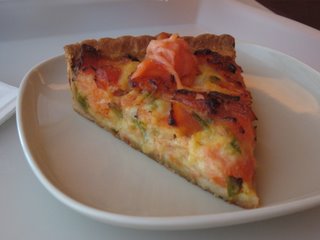 tained a ton of cured salmon, eggs, bits of green bell pepper, possibly scallions (aka green onions), slices of potatoes, and a certain cheese (possibly gruyere from the creaminess and the pronounced sharp quality). At the first bite, I thought, “Holy cow! That was salty!” They should’ve had the forethought that the cured salmon has a substantial amount of salt in the first place and be more prudent to add any more salt to the egg mixture. The crust was good; a slight buttery taste and has crumbly texture. If they had added a lot less salt, I would’ve enjoyed this quiche. 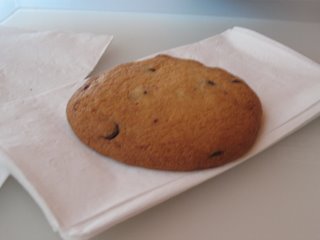 The chocolate chip cookie (from now on, I’ll refer it as ccc) looked sad compared to the pastries on display. I didn’t realized that until I sat down and looked at it. Well, I paid for it and I will eat it. I just hoped that it doesn’t taste as bad as it looks. lol. The cookie was soft and had a cakey texture, which what I don’t seek in a ccc; it doesn’t have much chocolate chips (not the greatest chocolate I ever tasted) per bite. It had a slight hint of almond extract flavor and a bit of brown sugar flavor. The only good thing was that it’s not greasy. Obviously, I was not too hot with this cookie.

My ideal ccc would be what Ed Levine (one of the food critics of the NY Times) stated in his blog, it should be “moist and light, crisp and yet slightly chewy, even pliant. There should be enough high quality chocolate in the cookie so that you get some chocolate in every bite. I don’t want any chocolateless bites when I eat a chocolate chip cookie. They should be buttery without being greasy.” So, it’s still a search and this would be another topic for this blog.

Anywhoo, I washed all of this food down with what I wanted and needed this morning, Joe’s coffee…my savior for the day. Then I dashed back to the subway and to my next class…history.