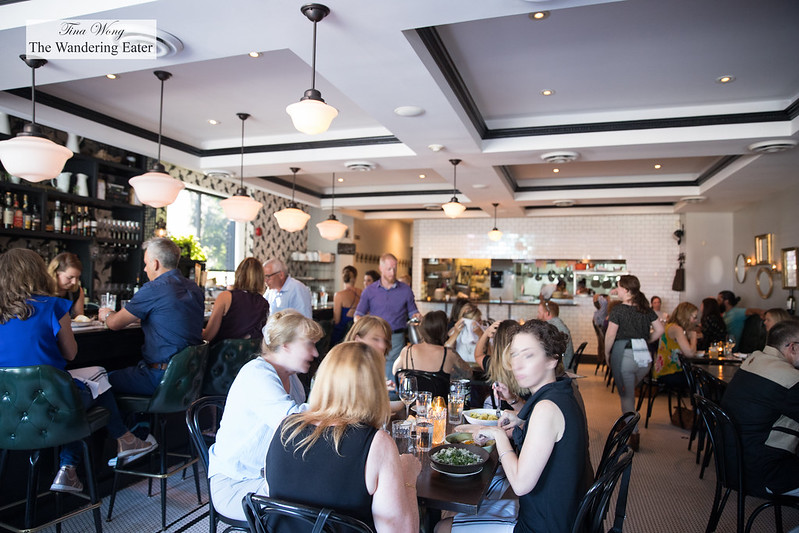 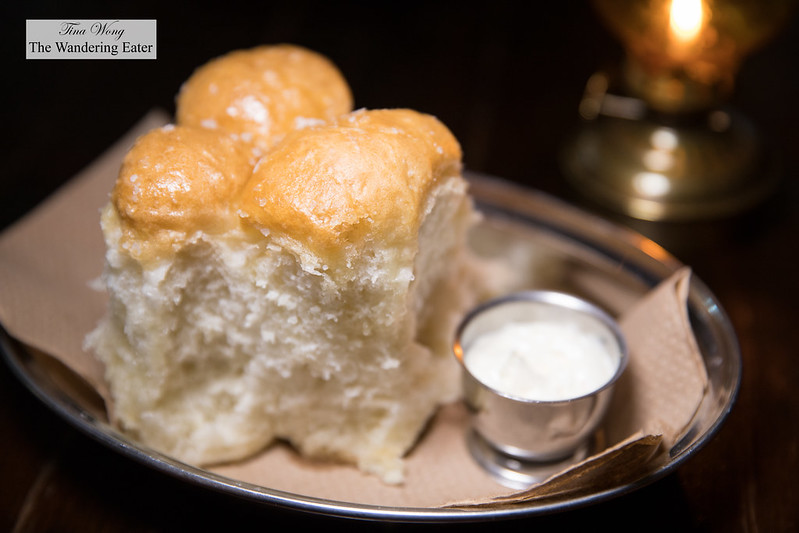 As a brief introduction for my readers out there who do not follow me on Instagram, I have been posting photos and occasional Stories of my recent travel to Ottawa, Canada. Now, most of you might look at me quizzically wondering “why Ottawa?” like many of my friends and acquaintances have. I have been to the well known Canadian cities of Montreal, Toronto (though admittedly, it’s been a while) and Vancouver and I want a short getaway for the summer holiday week. Also not everyone has been there and I don’t mind visiting a place that is relatively under the radar.

That said, one of my favorite meals in Ottawa was at Supply and Demand. This restaurant has been around for five years focusing on creative dishes with house made pasta and seafood. It’s still a popular place for locals ranging for people on dates, especially ones hanging out by the bar to locals who want very good food at a casual atmosphere.

The gratis house made Parker House rolls were sublime. Fluffy, clouds slathered in melted butter topped with flaked sea salt and served on the side with decadent whipped butter and rendered duck fat. I would eat a pound of this bread if I could but there’s food to be had. 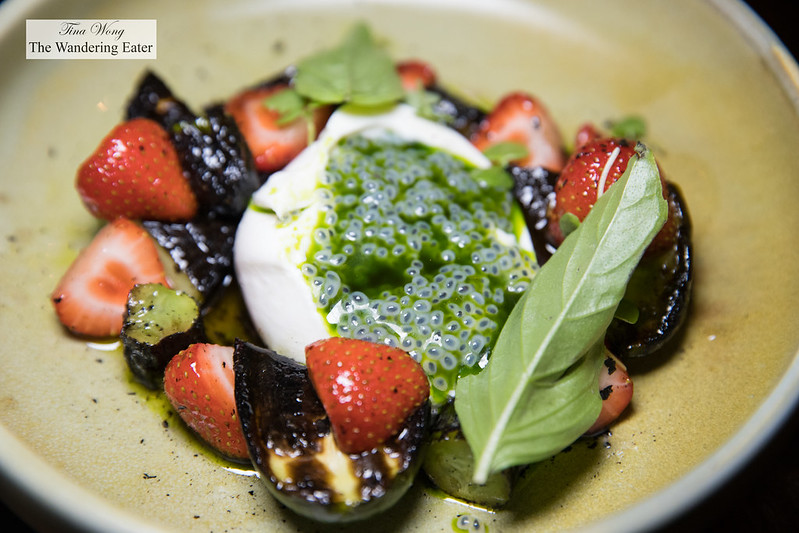 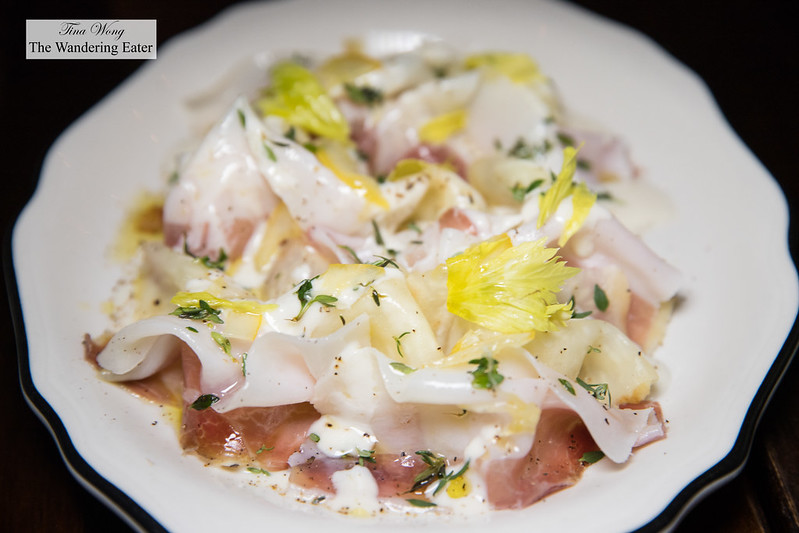 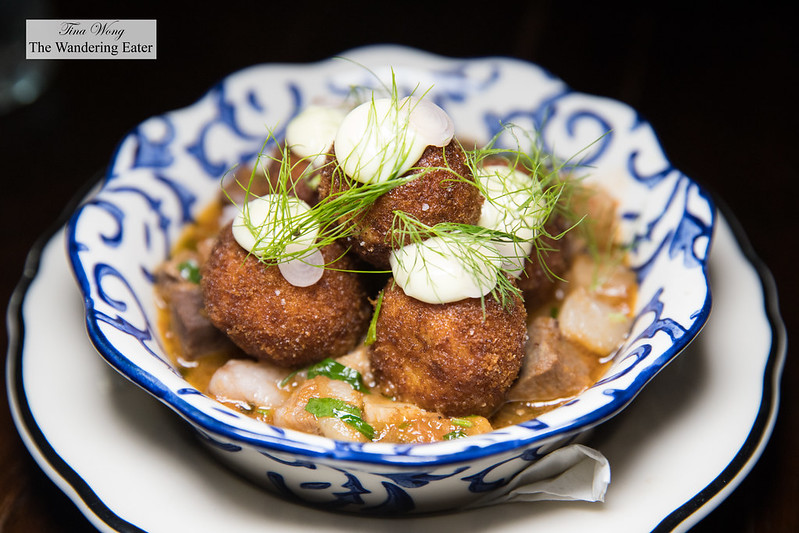 Most of the menu is made of small plates and usually I am over the small plates trend that’s been prevalent since the early 2000s but I’ll make an exception here. The plates are slightly bigger than what NYC serves so it’s not minuscule and each plate delivers on intense flavors that you won’t mind sharing it.

The burrata, charred cucumber, strawberries, basil, and chia seeds is closest to familiar as far as flavors go. The creamy burrata was delicious with the bitter cucumber and sweet strawberries with an herbaceous zing of the basil leaves. The salt baked celery root shaved tissue thin as the house made longza, layered with tahini, preserved lemon and thyme were flavor bombs that was silky and creamy in texture. The salt cod pulled pork fritters topped with lemon mayonnaise and pickled ramps were too easy to eat. Perfectly crisp on the outside and creamy within. The sauce that is under those fritters was a great dipping sauce for the house made rolls. 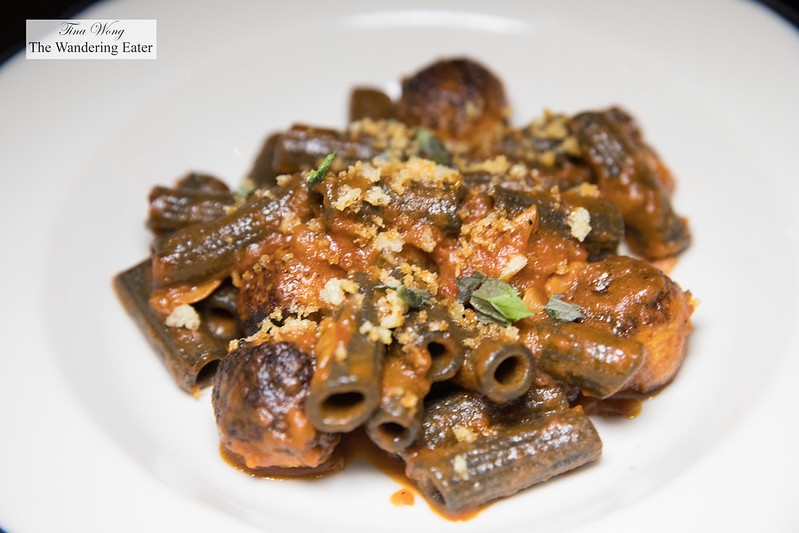 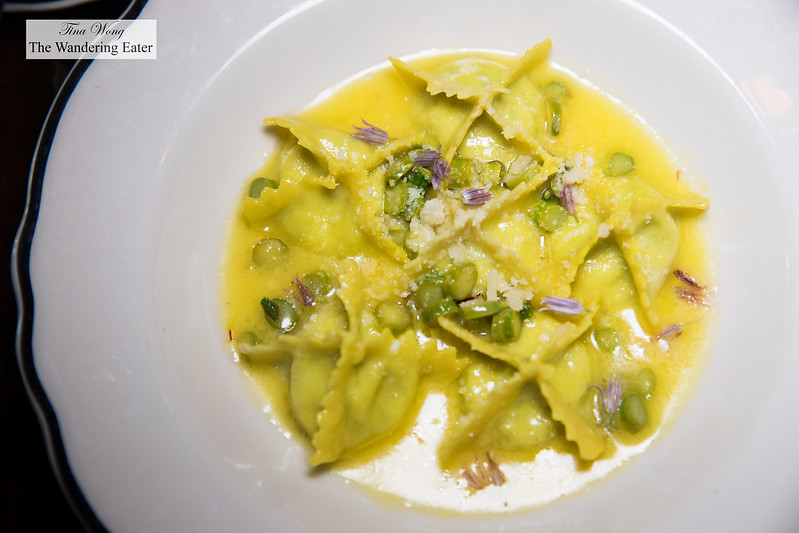 The pasta here is phenomenal. (It’s arguably better than a few restaurants I’ve eaten in Rome and Florence.) The house made pastas were truly toothsome and al dente and the flavor combinations worked great for each dish we’ve tried. The squid ink rigatoni with tuna and prosciutto meatballs, chilies, mint and bread crumbs was spicy but not overtly so as the palate is slightly cooled by the bites of mint. The briny flavor of the pasta worked very nicely with the meatballs and the breadcrumbs added some buttery crunch. The ricotta and nettle manti served with saffron butter and thinly sliced asparagus was rich but works well with the season with the fresh asparagus and the nettle. 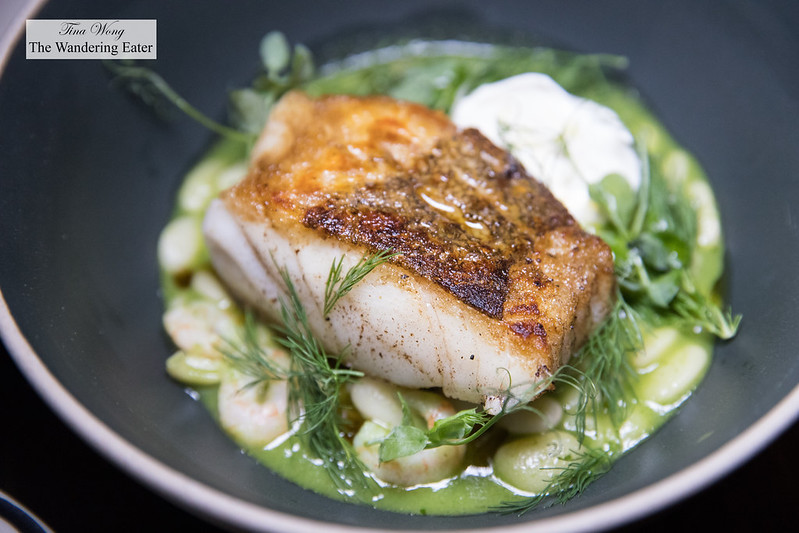 The restaurant’s menu for mains were limited to either chicken or cod and we opted for the latter. Roasted cod, butter beans, peas, Nordic shrimp, strained yogurt was delicious even though I’ve had cod many time over. This version felt inspired due to the the tart yogurt mixed with the herbaceous dill sauce and creamy butter beans and bites of sweet shrimp.

We opted not to have dessert as we felt full but I’ve seen the coupes of Eton Mess coming from the kitchen and to various tables around the dining room. It looked like an ice cream sundae but I know I don’t have the capacity to eat it if I were to order.

Overall, I adore this restaurant. All of the food were very good with strong flavors and very cooking execution; a few were great. The wait staff is friendly and knowledgeable of the menu and even willing to give us tips about what to see around the city despite having to take care of a full house (even people were waiting for a table at the hostess area).