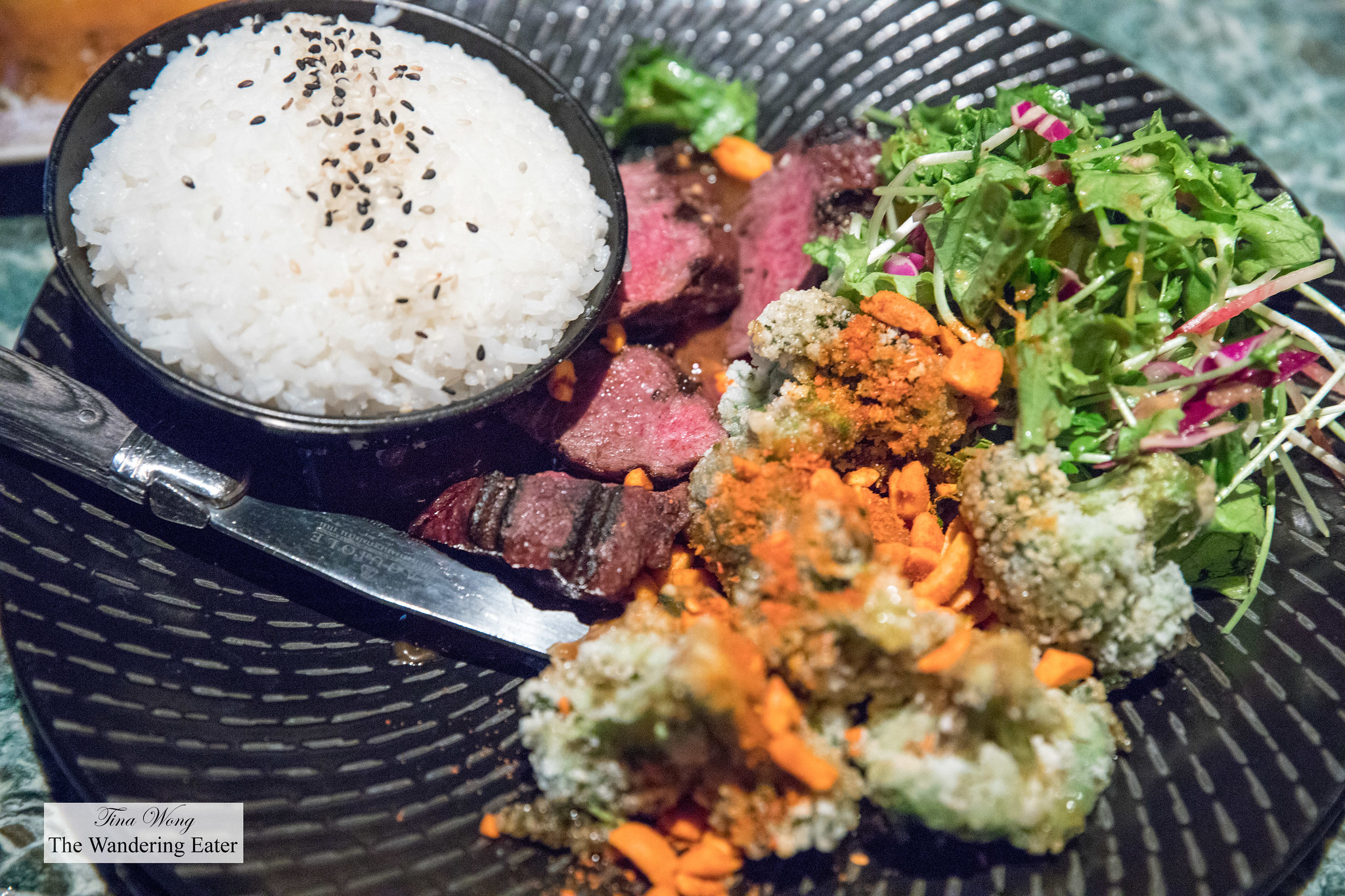 In the neighborhood of the Old Port where restaurants skew expensive (but good) French or the typical mediocre casual eateries that one would tend to find in a touristy area. However, there is a Southeast Asian inspired restaurant called Restaurant Hà on Avenue du Mont-Royal that may make your night if you order wisely.

I went there with a dining companion that horrendous evening when it felt like I was in a tropical storm. Winds were blowing hard. Rain was hitting on my cab’s windows so thick that you can’t see anything beyond the rain. We hesitated to step out of the cab despite the fact we were running about ten minutes behind and just about two yards away from the entrance. I bit the bullet and made the mad dash and open my umbrella simultaneously to the front door of Hà. The small foyer filled with a few broad leafed trees that leads downstairs to its separate cocktail lounge or upstairs to the restaurant were filled with young people soaking wet like I was waiting for either the rain to calm down or their friends having dinner on a Friday night.

The dining room has warm earthy tones and primarily set up with sectioned banquette style seating with large open windows viewing the street. Since neither my companion nor I did much research on what are the restaurant’s strongest dishes, ordered what appealed to us and hoped for the best.

We started off with the green papaya salad and fried tofu cubes with salad. I was probably expecting too much when I had many papaya salads in New York and even at Bangkok and hoped that it was decent but alas it was very one-noted. It lacked the punchy vivacity and fish sauce and dried shrimp funkiness in this type of salad that would make my palate sing. The fried tofu cubes were decent since the soft, creamy tofu cubes were delicately fried like tempura and the salad was fresh though the thick salad dressing was a bit sweet for my preference.

If there’s two dishes that made me happy, the grilled skirt steak was one of them. The steak was grilled to a nicely pink medium-rare and the tempura broccoli florets with spicy, coarsely ground peanuts was an unexpected but good touch.

The other dish that made me happy was the huge bowl of coconut tapioca that could easily be shared with two or three people. The flavors does remind me of Southeast Asia. The predominant coconut flavors and the tapioca was cooked perfectly (not too chewy/under cooked and not too mushy). The fresh fruits added some bits of pleasant acidity and the candied walnuts added a touch of sweetness and smoky-nutty flavors.

The matcha cheesecake that was available that night was essentially a plain cheesecake lightly dusted with matcha and a few fresh blueberries. It’s not bad but it should not be called matcha cheesecake. Overlooking the misnomer, the cheesecake was creamy, not too heavy and sweet enough.

Overall, Hà is a nice option compared to what’s found in the neighborhood. I do regret not ordering their pork belly buns since I’ve read articles later on that it’s the thing to eat but there’s next time.