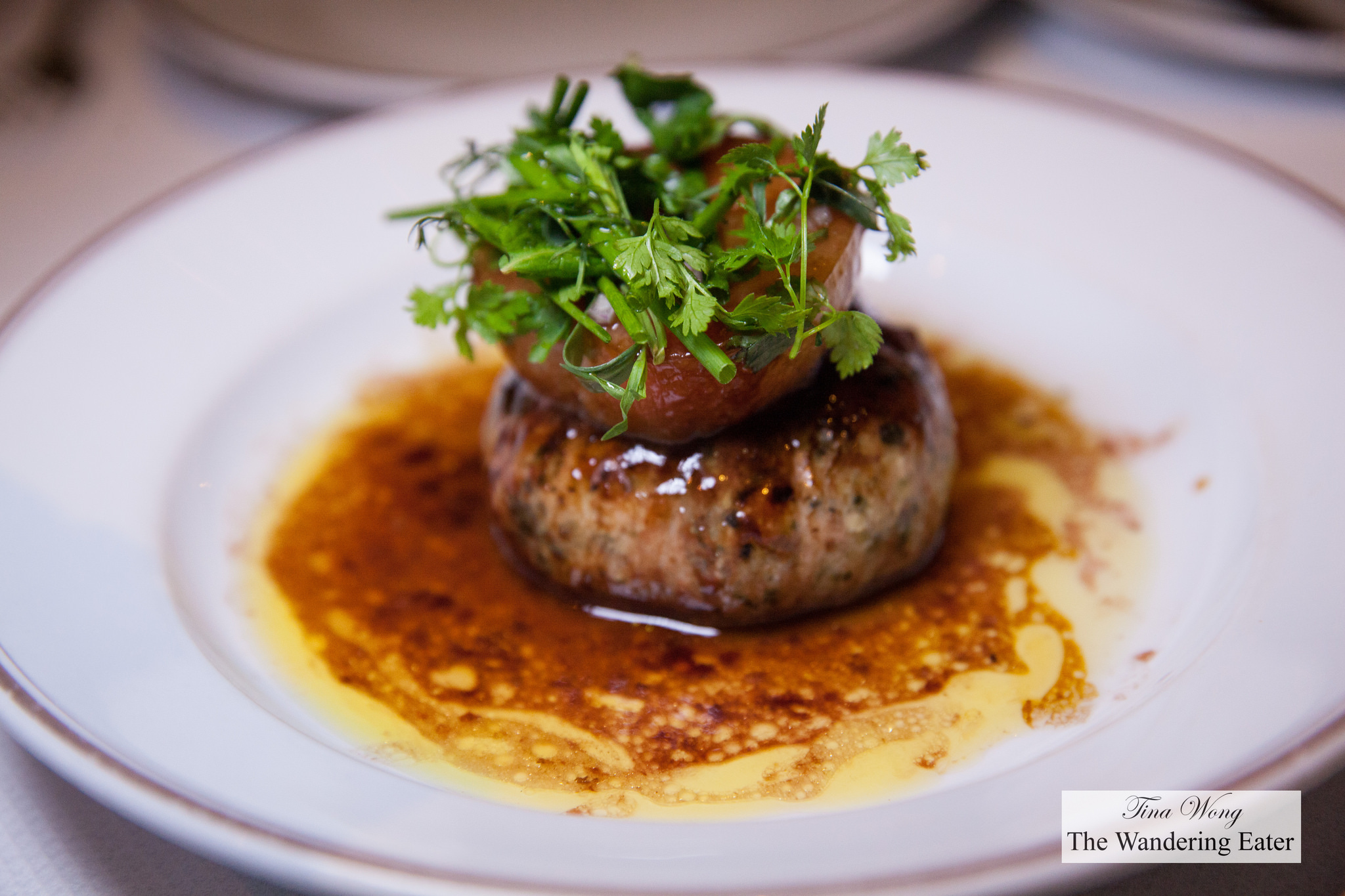 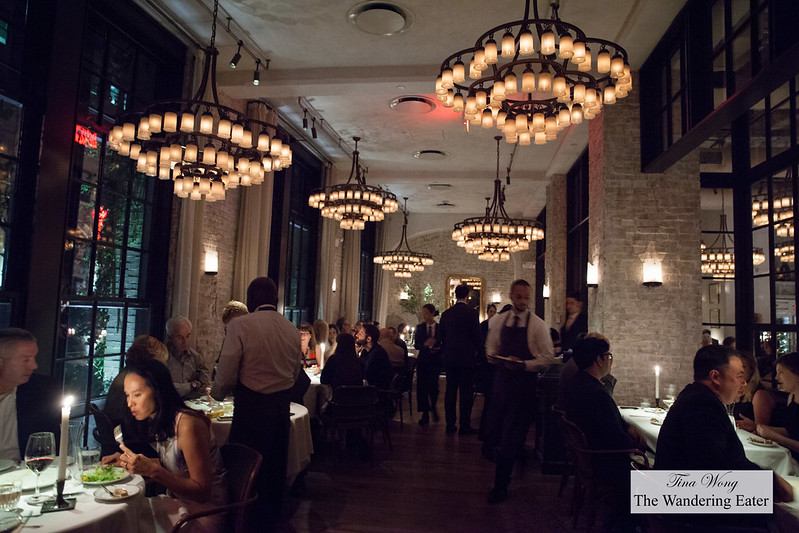 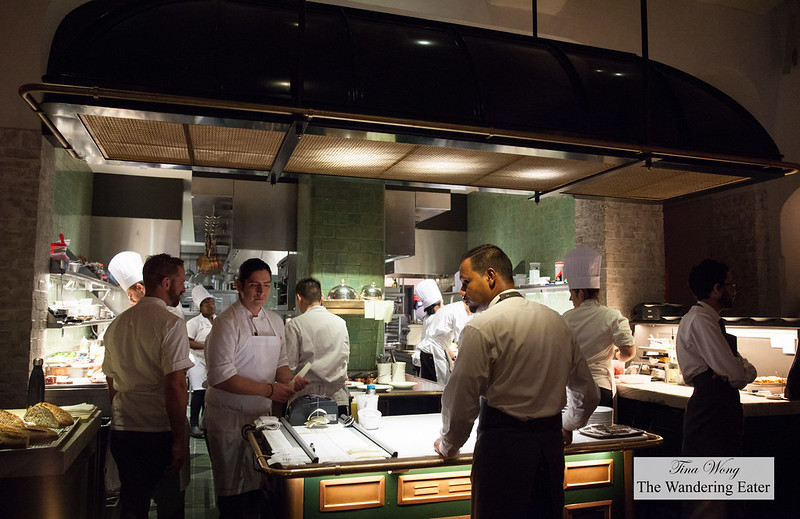 When you think of recent restaurant openings for the past few years (decade, really), it feels like elegant fine dining is dying. There are a select few restaurants that really drum up the food press of fine dining are places like the revamp of the legendary Four Seasons hotel’s restaurants led by the Major Food Group — and where I chose to celebrate my mother’s birthday at Le Coucou that opened about a year ago.

Once you enter the doors of Le Coucou, it feels grand and sophisticated with the large circular chandeliers, plush leather stuffed banquettes but with just enough rusticity that it doesn’t feel stuffy.

Our table gave us a good view of the open kitchen with an earshot of the chef calling out the various dishes to fire up to the small army of cooks. Little things like this brought back the memories of an old fashioned French restaurant. 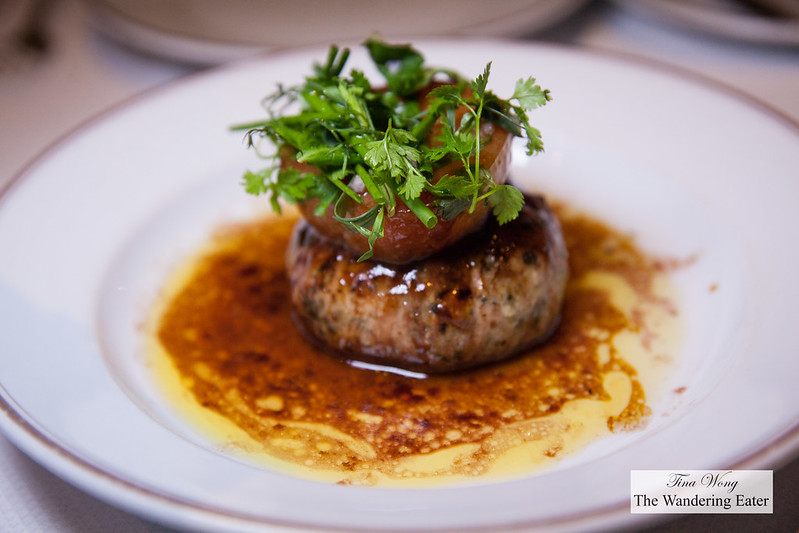 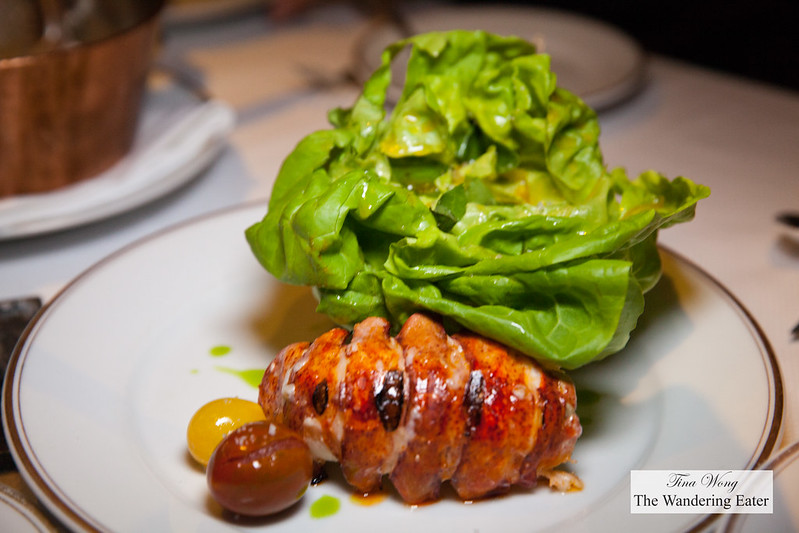 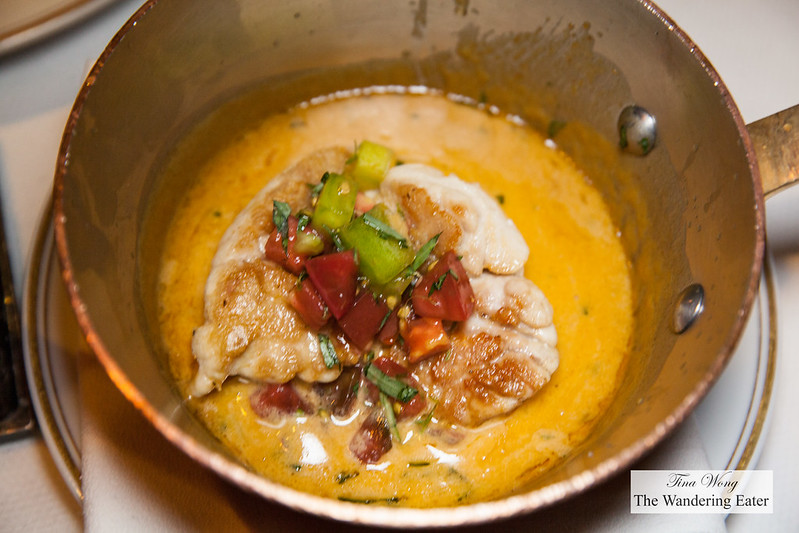 When you read through the menu, it reflects the old French cooking that uses offal (and not just foie gras). The latter is a general rarity and I am always a fan of offals when it’s cooked right. The crépinette de volaille aux foie gras et fruits is a ground chicken patty stuffed with creamy foie gras and topped with large chunks of sweet-tart roasted plum. The dish was perfectly seasoned and the meats were flavorful and incredibly juicy.

The salade de homard with sauce lauris is as good as an upscale lobster salad you can get but a little bit of a DIY. A whole, cooked but cold lobster tail with a beautiful, tender leafy bibb lettuce dressed in a lemon-y vinaigrette. All one has to do is pick up that little copper sauce pot with a spoon and dab some of that thick, creamy sauce lauris (it’s akin to mayonnaise).

The ris de veau a l’estragon – sweetbreads, crème de tomate, and tarragon was the appetizer I looked forward most to since I adore sweetbreads. Something about its luscious, creamy texture of that thymus gland that I love. The tomato cream sauce and tarragon were very good flavor combinations for the sweetbread but it’s a pinch under seasoned. 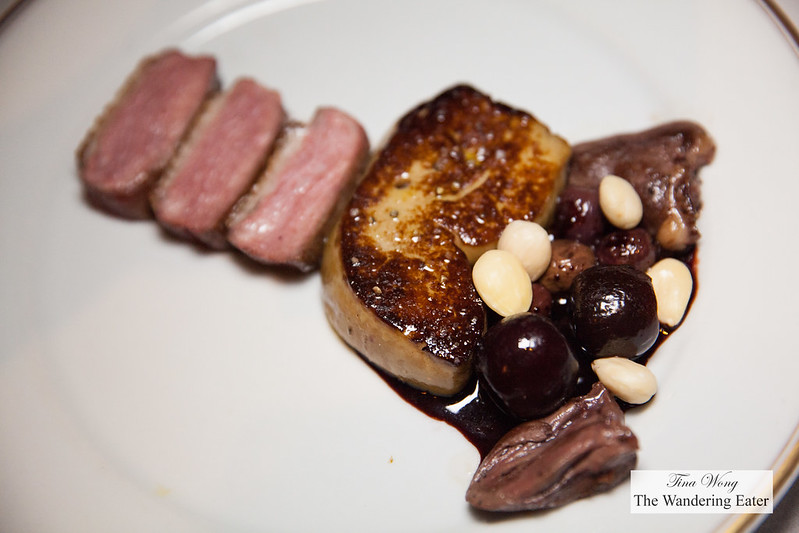 The duck, cherries, foie gras and black olives were my mother’s pick for her main course. She was genuinely happy with it. The slices of tender duck breast were perfectly cooked to a pink, medium-rare. The small lobes of creamy foie gras paired with the dark, sweet cherries nicely. I was surprised there’s duck heart served along with the dish and it’s very tasty. 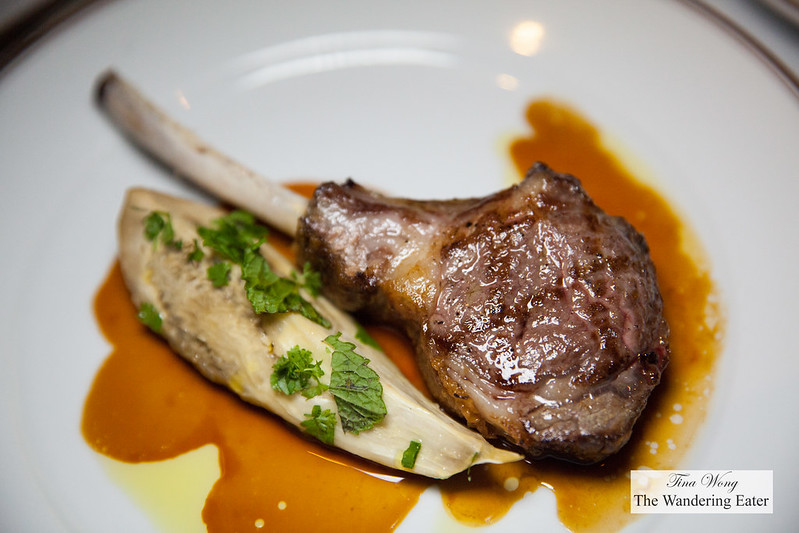 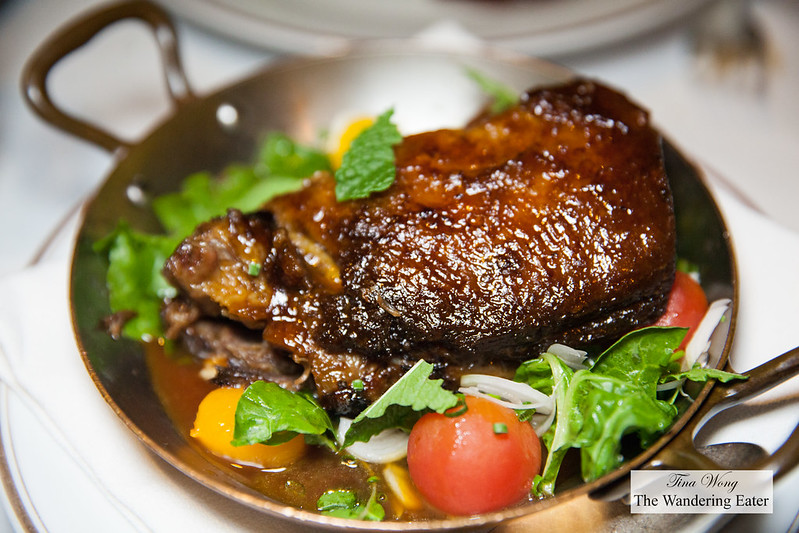 My father had the grilled Colorado lamb with steamed eggplant and served on the side a hearty portion of braised lamb neck with tomatoes. Though all of the dishes of the evening were very solid and held onto its own, I was obsessed with that succulent neck. It melted in my mouth and it’s incredibly flavorful with various spices. 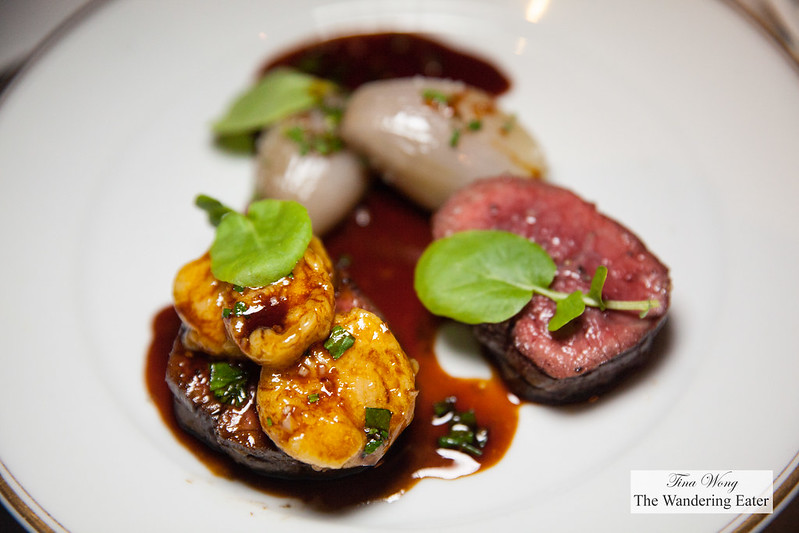 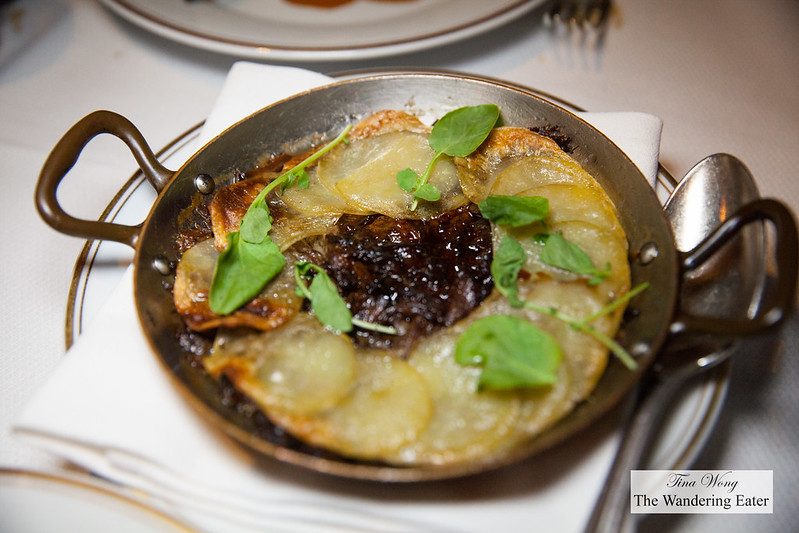 My brother’s prime filet with bone marrow jus was served with a shallow round copper gratin pan of braised oxtail meat with paper thin slices of potatoes. The beef itself was perfectly cooked and seasoned well. The oxtail though was robust with flavor. 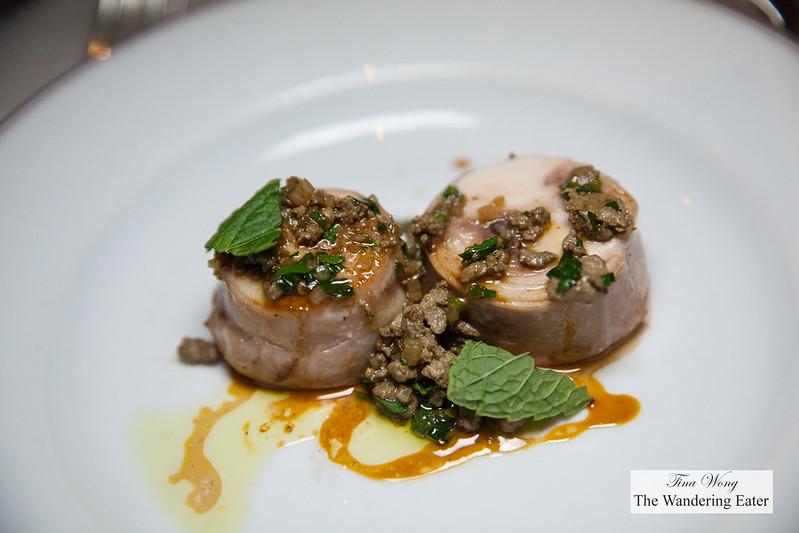 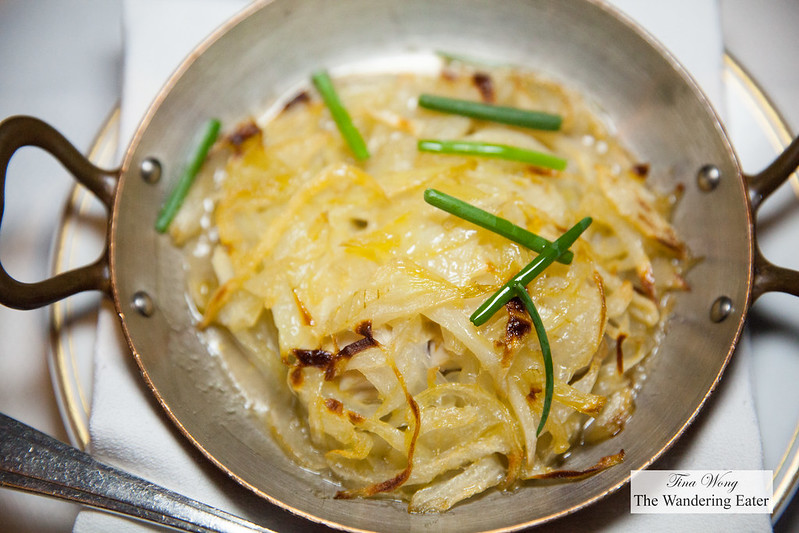 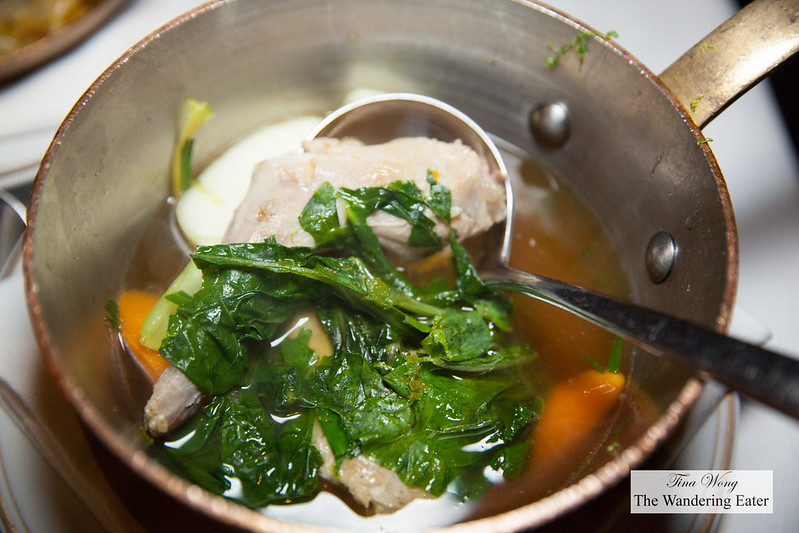 As for myself, I had the rabbit. What I didn’t expect something that becomes a multi-course dish (essentially, soup, vegetables, and main course of meat) served all in one go and it’s from the one animal. The wait staff came out with my pot of broth filled with Swiss chard, turnips, carrots and the rabbit’s hind leg, a shallow round pan filled with its front leg and covered in a blanket of sautéed onions, and a plate with two small roulades of saddle meat. The saddle meat surprised me the most as it’s the most game-y of the three dishes. Not a bad thing but it had the most character of the rabbit. The other dishes played on the sweetness of the animal’s meat, enhancing it with the various root vegetables and the soup mimicked the idea of what a rabbit could have eaten. It’s feels and taste classically French in regards to the flavors and the presentation is refined. 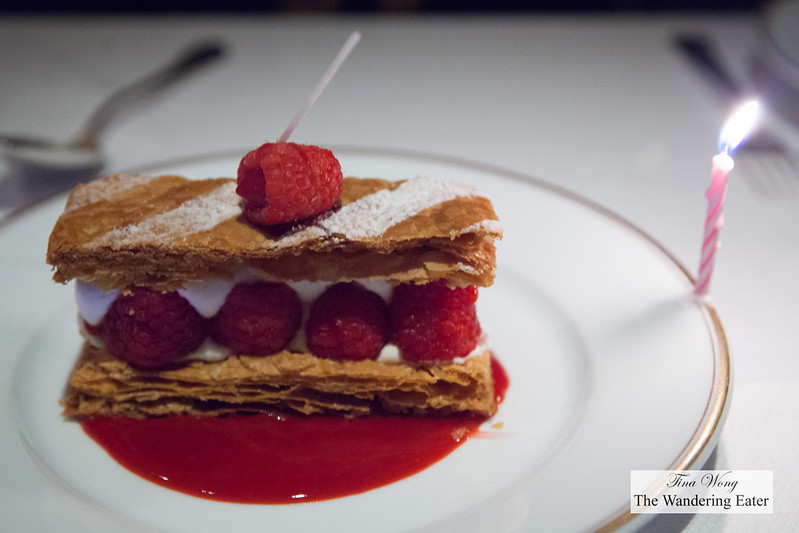 For dessert, we had the raspberry millefeuille and set with a candle since it’s for my mom. The pastry was textbook perfect. Flaky layers of buttery puff pasty and the pastry cream was ethereally light and just sweet enough to accentuate the fresh raspberries. 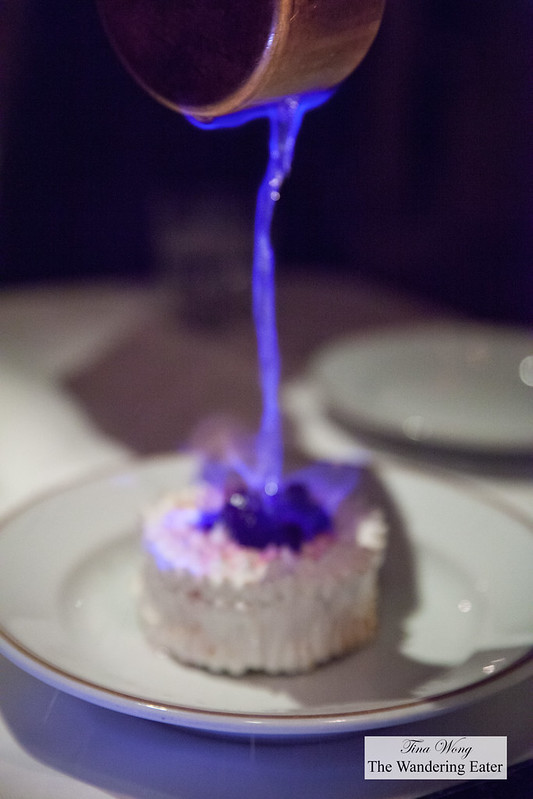 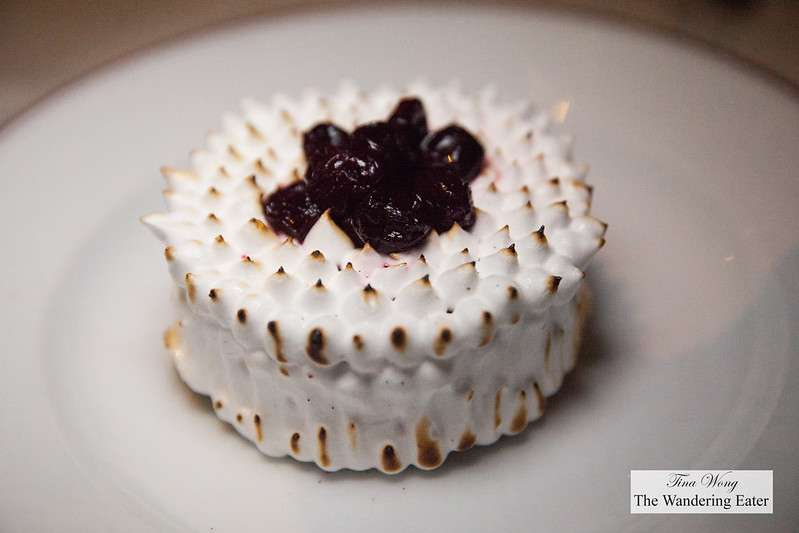 I wanted the Omelette Norvégienne (English translation: baked Alaska) and I love the flavors of pistachio and cherries. The dessert was presented at the table, where the waiter flambéed the eau de vie, a fruit brandy, table side and poured it onto our baked Alaska. The pistachio ice cream dotted with cherries and the cake were delectable. We all commented that the brandy was potent on the tongue – and we’re not complaining. 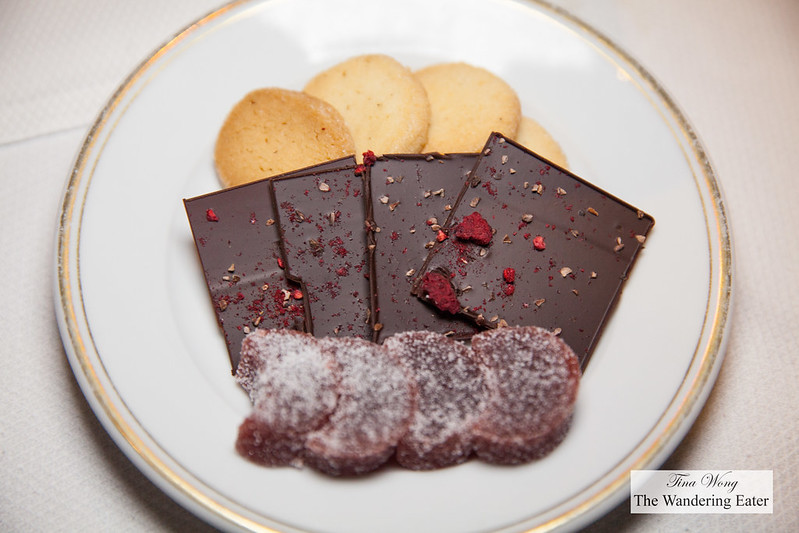 To end the meal, we were presented with a plate of petit fours – buttery shortbread cookies, dark chocolate tiles sprinkled with sea salt and freeze dried raspberries and soft raspberry pâte de fruit. The latter were my mother’s favorite. I adored the cookies but all of the sweets were great.

Though the meal is generally expensive, it’s worth it and getting a reservation at this restaurant is still relatively hard for dinner.

For more photos, please CLICK HERE for the complete sets or see below for the dining photos: