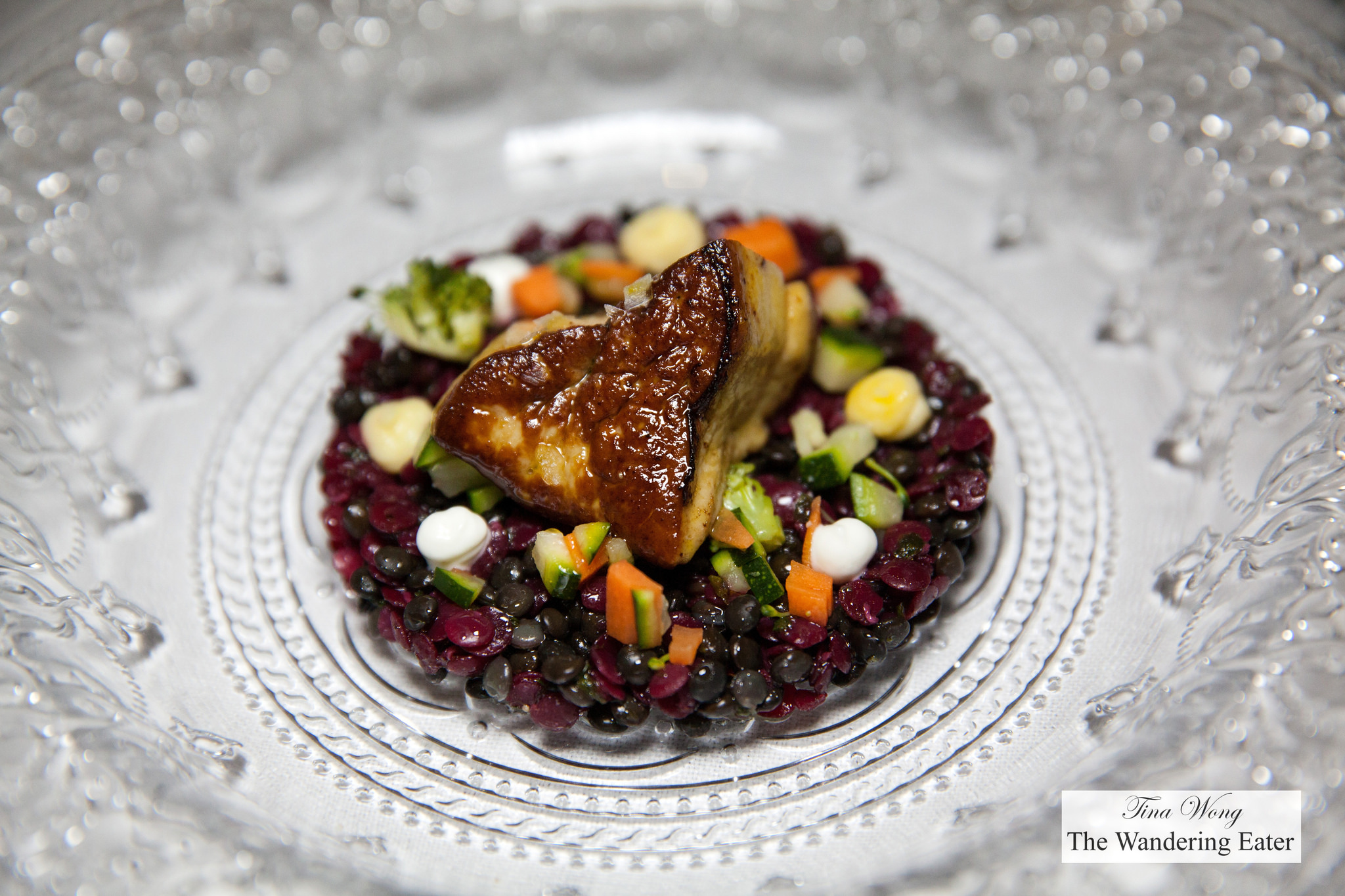 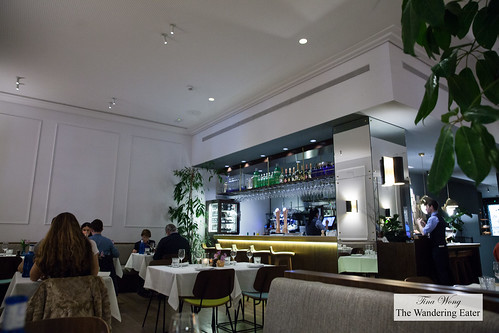 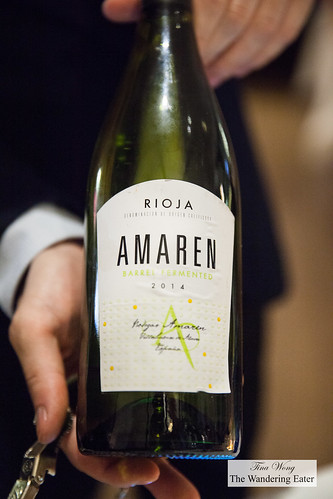 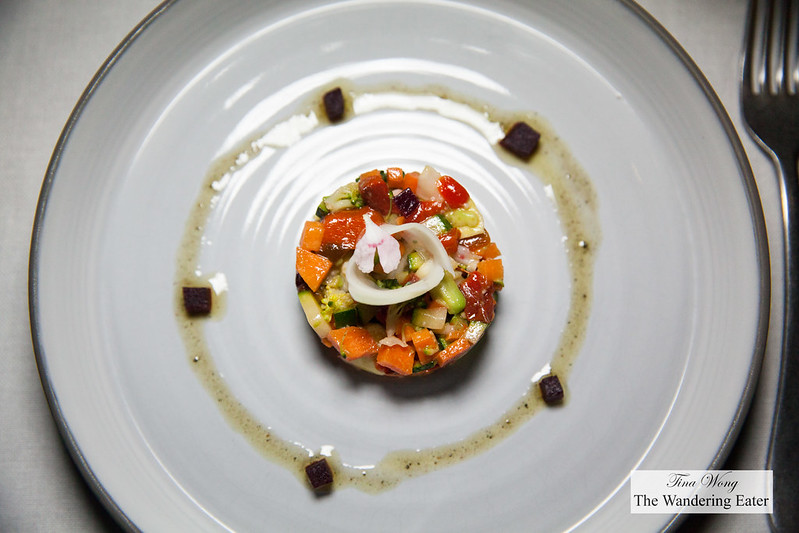 Hermosos y Malditos is located in Totem Hotel in the upscale Salamanca district of Madrid. Spanish for ‘The Beautiful and The Damned’, Hermosos y Maldito is a culinary hotspot that nods to F. Scott Fitzgerald’s second novel, the morality tale, ‘The beautiful and damned’ about elite urban socialites, the decadent lost generation.

Food, by Rodolfo de Bernardi and Nacho Tirado’s is health-conscious Mediterranean home-style cooking, while the damned comes in the form of a round-the-clock Prohibition-style bar, featuring a vast menu of classics along with bespoke creations by mixologist Fran Camino. The menu is an intelligent mix of Mediterranean dishes with some American influences, including some classic cocktails.

We started our dinner with a bottle of fruity (notes of pineapple and citrus), smooth Bodega Amaren Rioja Blanca 2014 and vegetable tartar. The tartar was very satisfying with the zucchini, tomatoes, carrots and broccoli dotted with beets. 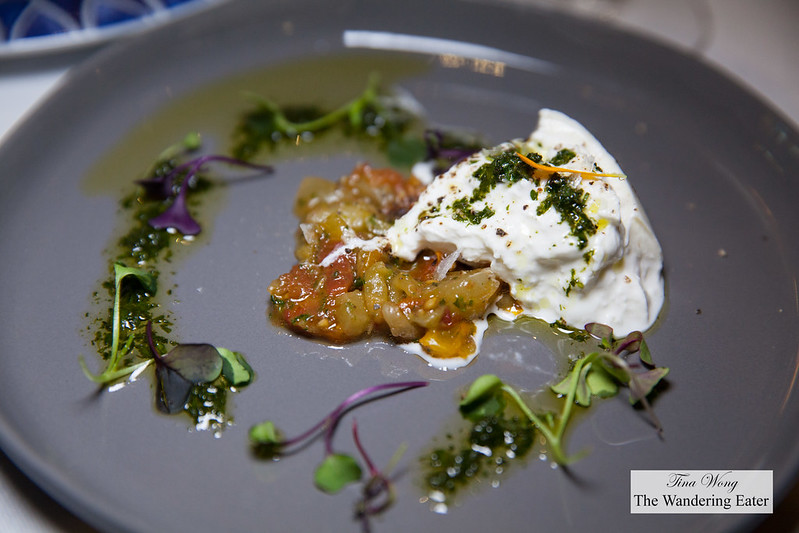 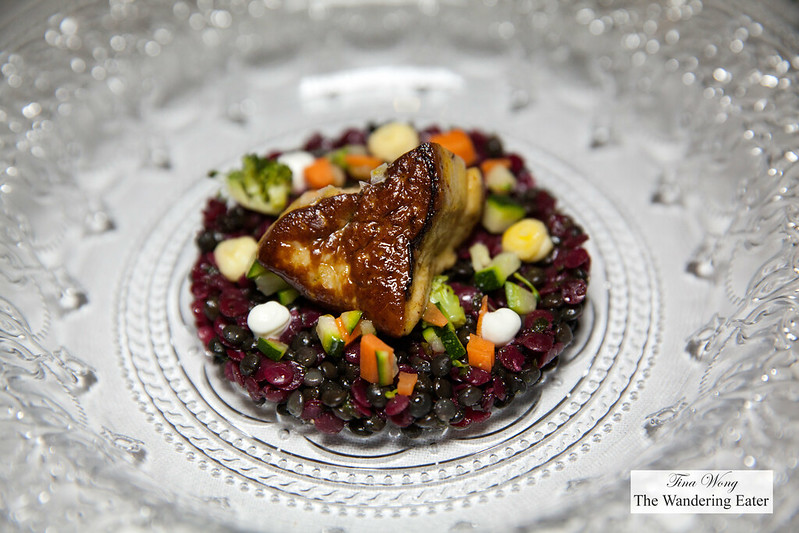 The foie gras, red and black lentils salad with vegetables was another mostly wholesome dish but the modest lobe of rich and perfectly seared foie gras was delicious. It’s just the right amount of richness without weighing the stomach down and the vegetables and lentils were seasoned nicely. 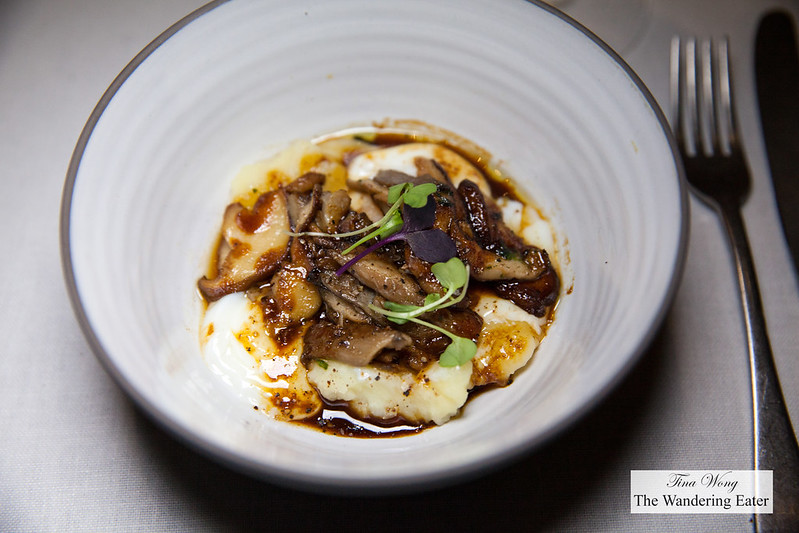 The eggs, potatoes and mushrooms was a hearty bowl that felt comforting, especially the chilly, rainy evening we were there. The egg was poached and still had a runny yolk that created a rich sauce with the mushrooms. The potatoes added some heft and carried out the flavors. 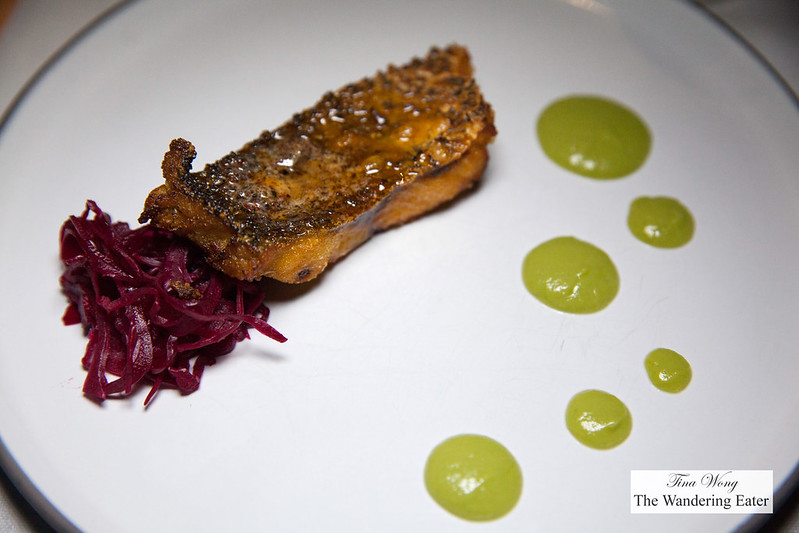 The sea bass topped with red cabbage and avocado was a good fish dish especially having the fish’s skin crisp from its searing. The cabbage was lightly pickled adding complexity to the dish. 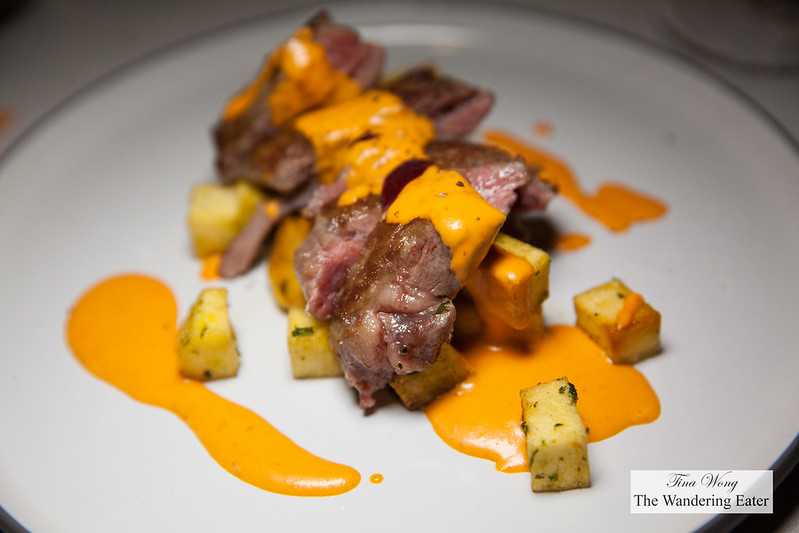 Our final savory course of Iberian pork with red mojo sauce was very good. The pork was cooked to a medium-rare (I know most of my fellow Americans are a little squeamish about that but it’s the norm in Spain) and it was tender and it’s of good quality pork. The mojo sauce added some pungent acidity with garlic and red peppers. 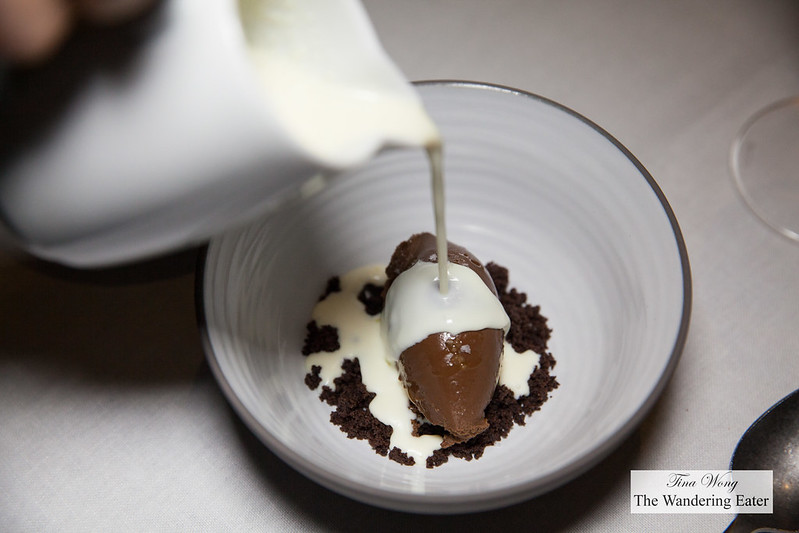 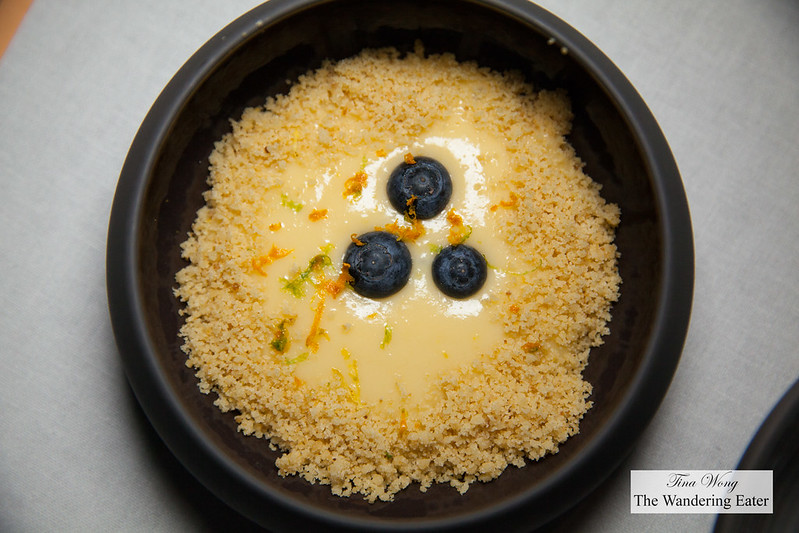 For desserts, we had a chocolate mousse dessert with white chocolate sauce and chocolate cookie crumbles and the lemon cream with crumble and blueberries were good. The mousse was dense and rich as almost like ganache. The lemon cream was a better choice between the two after having a big meal since the bright acidity of the lemon helps some of the digesting even though we’re eating a cream. 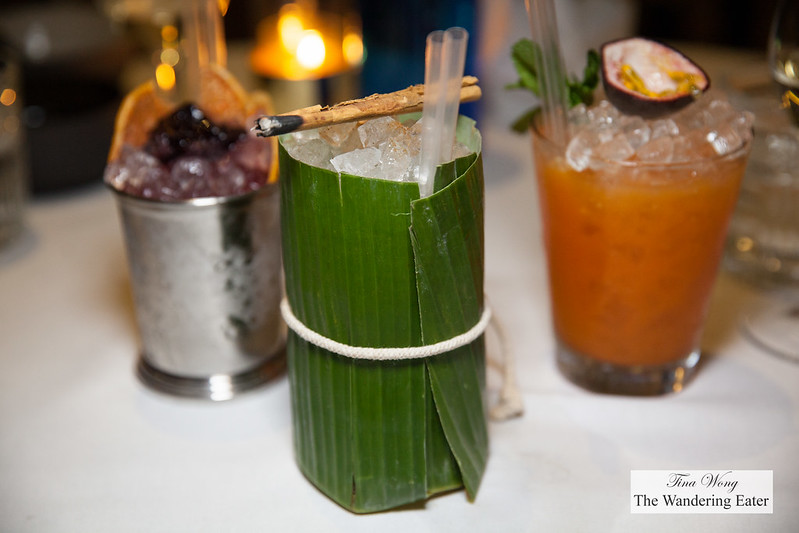 We finished the evening with very good cocktails. I had a Cinnamon Manhattan made of bourbon, cinnamon, red vermouth, apple zest and pineapple and Peychaud´s bitter. It’s boozy without being in my face and the flavors come through harmoniously well. One of my dining companions had the a drink (forgotten the name) made of vodka infused in Campari and red fruits, elderflower liqueur, and citrus zest that was refreshing and citrusy without being too sweet and my other friend had a non-alcoholic drink of orange, passion fruit, and strawberry juices. It was a good nightcap for the lovely dinner.