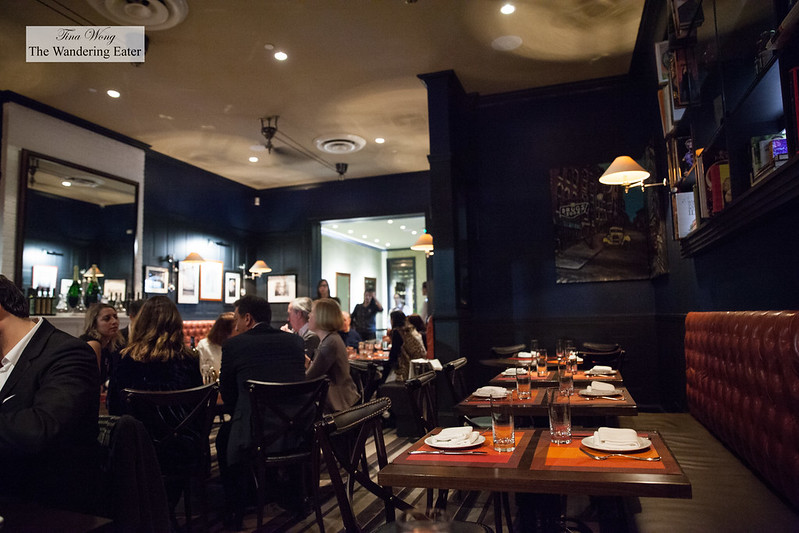 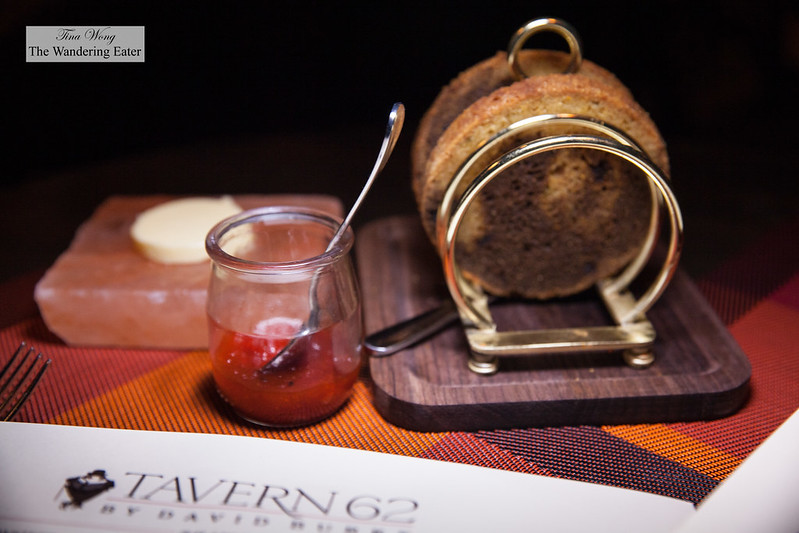 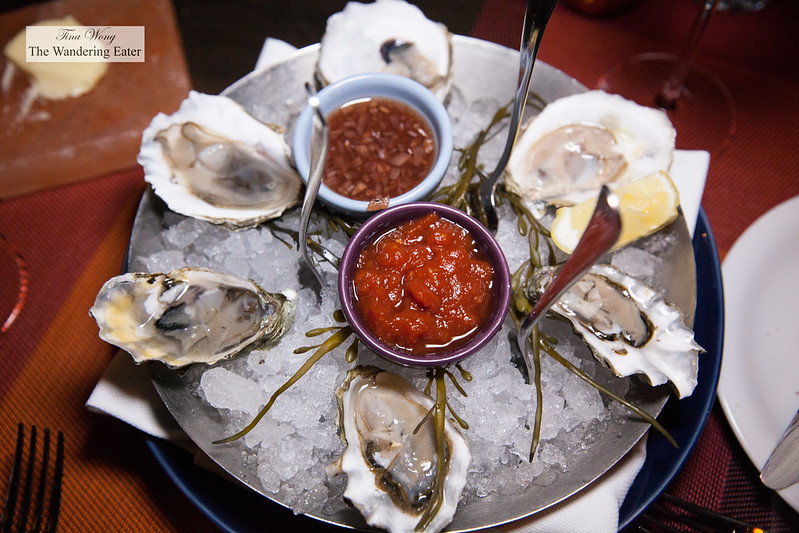 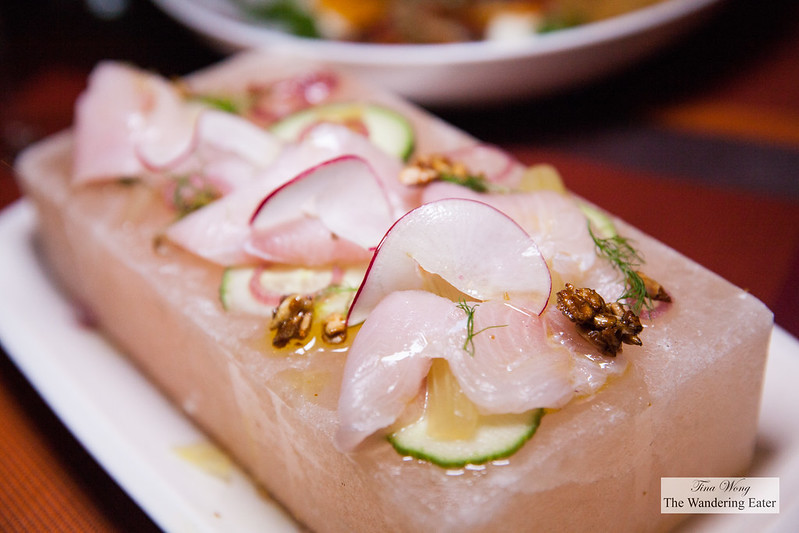 Tavern 62 is the latest venture (in a familiar space) for Chef David Burke that opened since October 2016. This space was previously Fishtail and from my friend’s and my own recollections from many years ago called Townhouse, where we had our first taste, literally, of Chef Burke’s whimsical take on American cuisine.

This time around, the ground floor is the bar, where a large after-work crowd were hanging out with a beer or a drink. The second floor has a spacious dining room that feels like a gentleman’s lounge — dimly lit, dark blue painted walls and long, handsome brown leather banquettes that lined two walls of the room. It’s a bustling restaurant especially during the 7:00 PM hour on a Wednesday.

We started off with drinks — Lady Liberty (Bastille Whisky, Carpano Antica, Vermouth, and orange bitters) and a seasonal drink made with Concord grapes and vodka (apologies, I forgot the name). What surprised us both is that these drinks were on the sweeter end. I was expecting the Lady Liberty would be similar to a classic Manhattan cocktail in terms of the flavor profile and the Concord grape drink not to look like a Cosmopolitan. Both drinks were a bit sweeter than we preferred. We have ordered glasses of Malbec to pair our later courses.

The house made jalapeño Boston bread served on the side pepper jelly and sweet butter on a salt slab was very good and has the whimsical presentation of Burke. The bread was moist and the jalapeño flavor was very tasty. If you’re inclined to smear your bread with either spreads, you should stick with the perfectly spreadable and salted sweet butter. The red pepper jelly muddles the jalapeño flavor rather than reinforcing it.

For starters, we had the fresh shucked Hama Hama oysters dressed “Thai style” was a good plate of oysters (Hama Hamas have a refreshing flavor, not the salty like the East coast oysters). The hamachi crudo with citrus, anise, sunflower seeds was a beautifully fresh hamachi was delicious with the citrus and nutty flavors but a few slices were sitting on the Himalayan pink salt slab a bit too long that it tasted too salty. 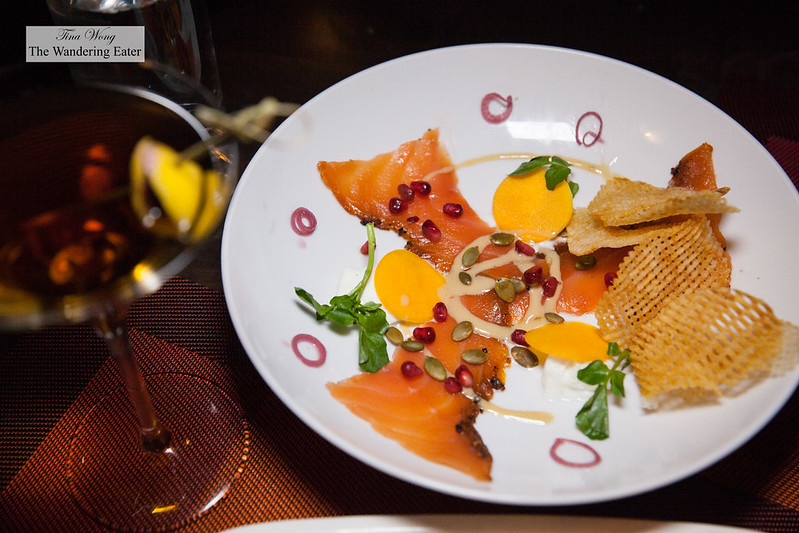 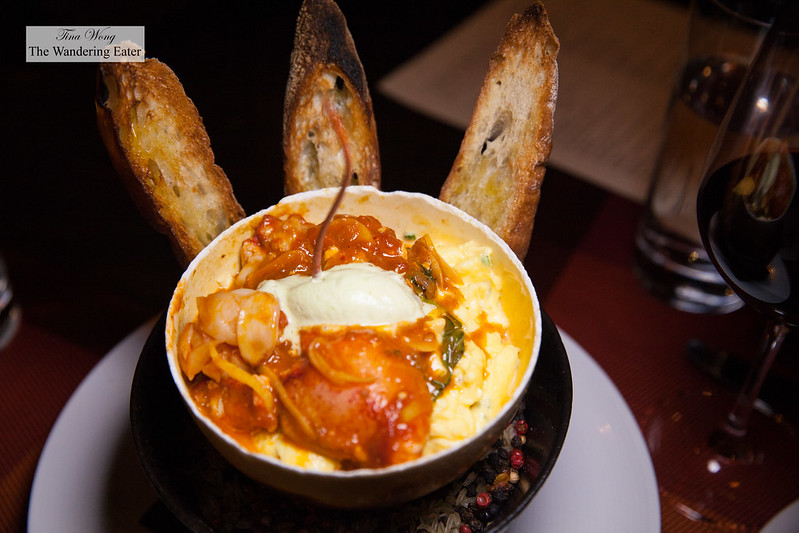 Pastrami salmon, burrata, pomegranate, sunflower seeds, butternut pickles and waffled potato chips is a classic Burke dish and it’s definitely a good one. The salmon had good pastrami flavor and the burrata added some creaminess and delicate crunch of the chip. The angry lobster scramble was fantastic. Large chunks of sweet lobster, cooling and creamy crème fraiche, sharp hit of herbaceous basil, mixed with the mildly spicy tomato sauce was a great combination. 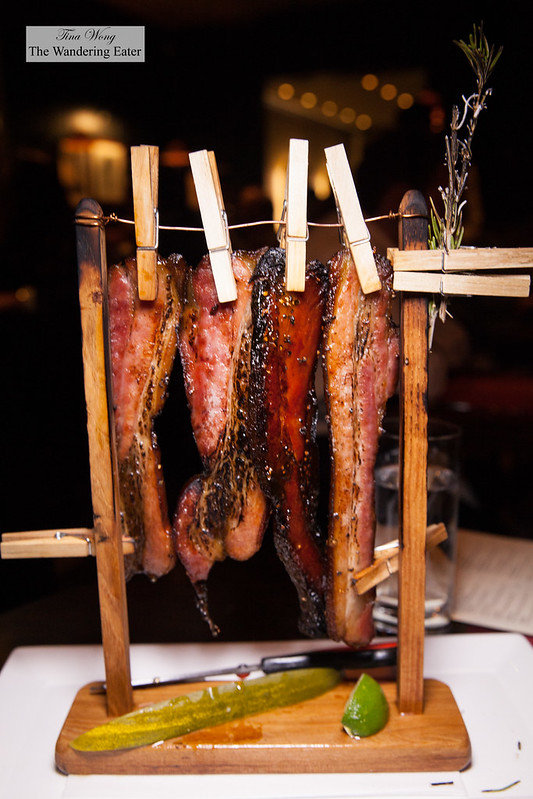 Priming us for the heavier courses, we shared the “clothesline” candied bacon, another Burke signature dish. Like what my friend said, this would be the ideal bacon for any restaurant. The bacon is perfectly rendered; it has a higher ratio of meat than fat and the maple-black pepper glaze achieved the sweet-salty balance. The serving of a half sour pickle was perfect to contrast the fattiness of the bacon. 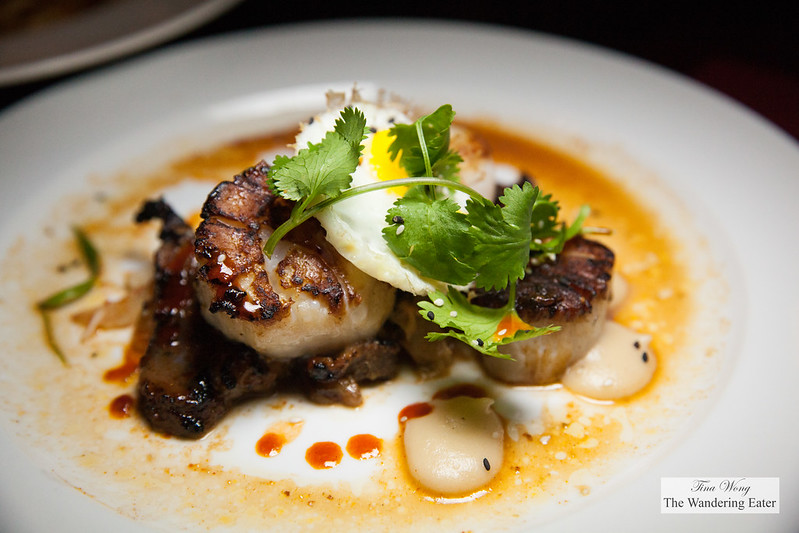 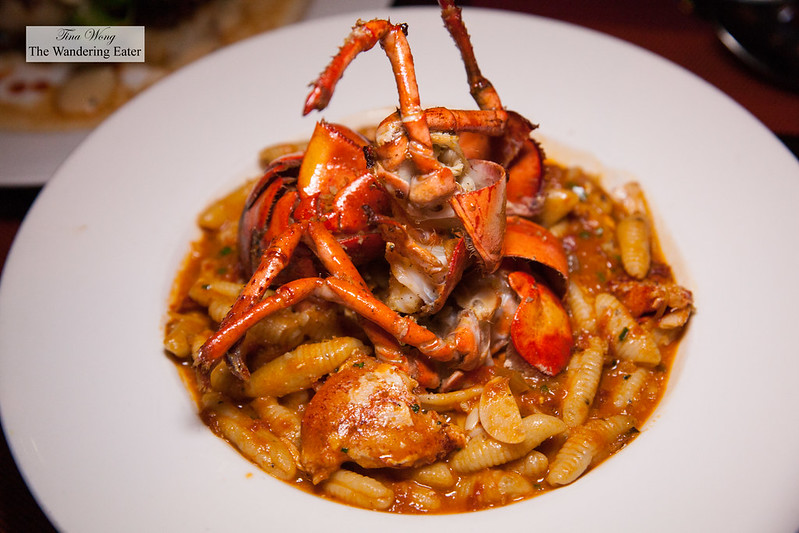 The cooked seafood dishes were pretty solid based on what we had. The seared scallops and grilled shortrib is a Korean variation on surf and turf. The shortrib is definitely Korean galbi with the prominent gochujang flavor. The fennel-cabbage kimchi emphasize the galbi’s flavors and the pear purée sweetened and softened the spiciness of the dish. The scallop was a good vehicle to these flavors. The slightly unfortunate thing was quail egg was cooked through but frankly, this dish doesn’t really need the egg either since there’s a lot of flavors and textures going on. The lobster fra diavlolo had a very good balance of flavors of lobster, tomato and chili but the cavatelli was cooked a bit too long that it was gummy. 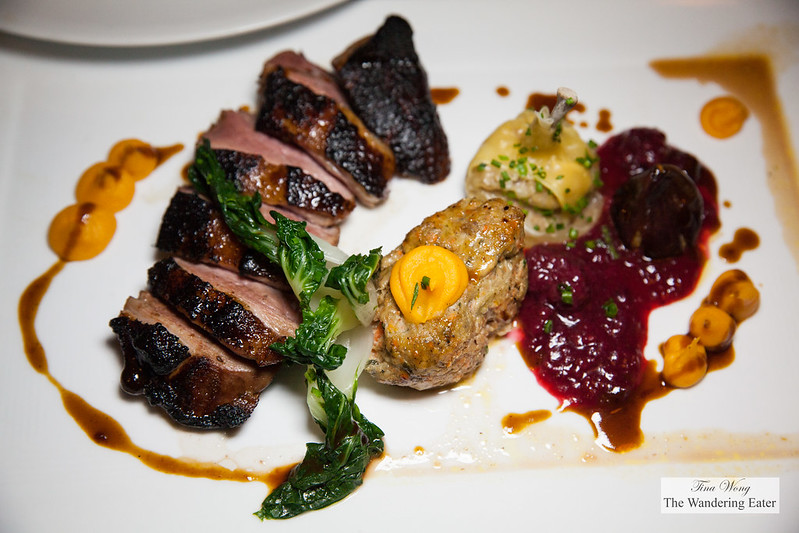 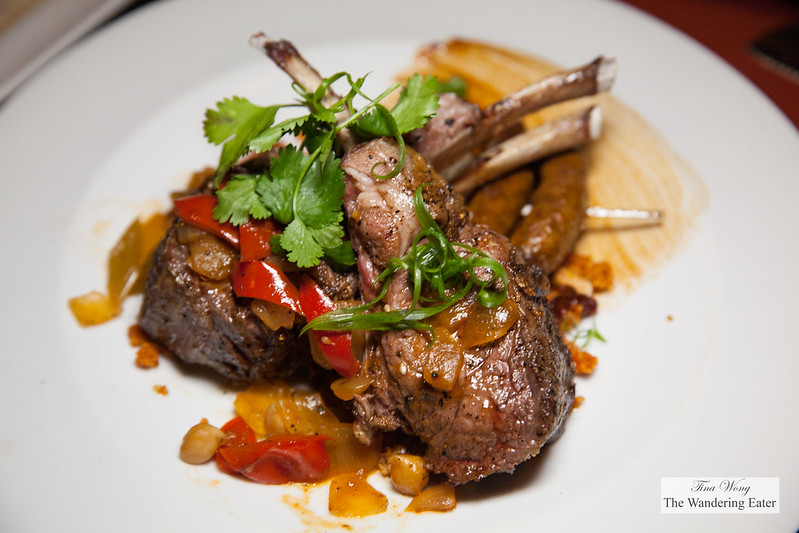 Heading toward the final savory courses, the Duck, Duck, Duck and the evening’s special of roast rack of lamb. The lamb is Moroccan inspired dish accompanied with couscous, bell peppers, and merguez sausages. The lamb was beautifully roasted and tender but the tasty Moroccan flavors of the sauce and sausage was disjointed. Probably it didn’t have time to cook together. The duck dish was essentially duck cooked three ways — roast duck breast, foie gras dumpling, and cornbread meatloaf. The duck breast was cooked nicely. The foie gras dumpling was flavorful and had the delectable liver funk. The cornbread duck meatloaf with cranberry sauce and marshmallow sweet potato mousse tasted like Thanksgiving. 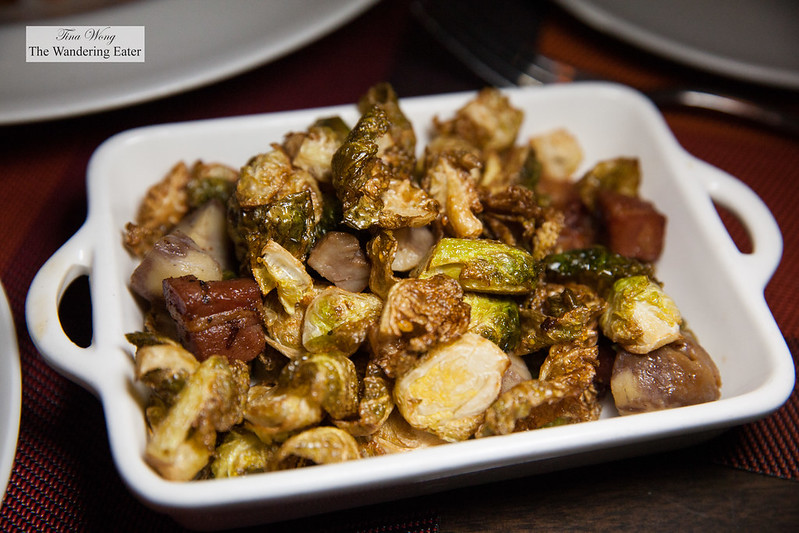 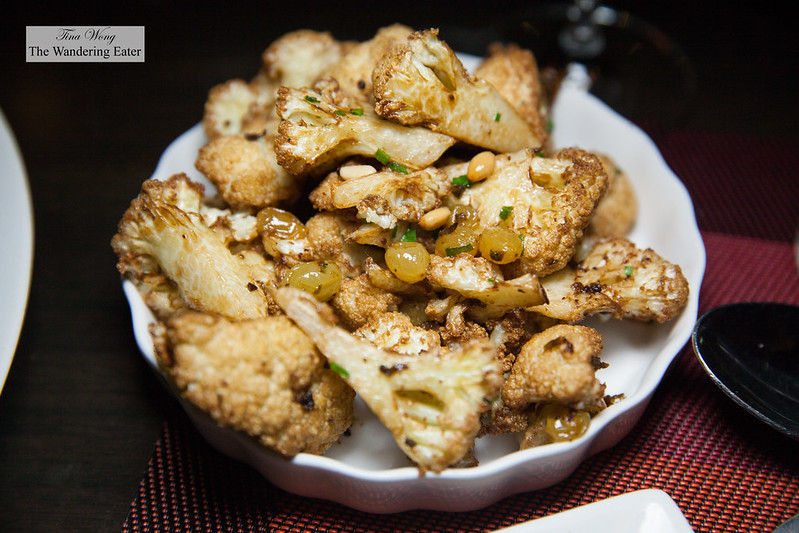 We had vegetable sides to have some attempt to balance our protein-heavy meal. The fried Brussels sprouts with chestnuts and pancetta was perfectly caramelized and fried. The roasted cauliflower with anchovy and pine nuts was incredible. We loved the meaty flavors the anchovy provides and the pine nuts added some crunch and a particular nutty-floral dimension. 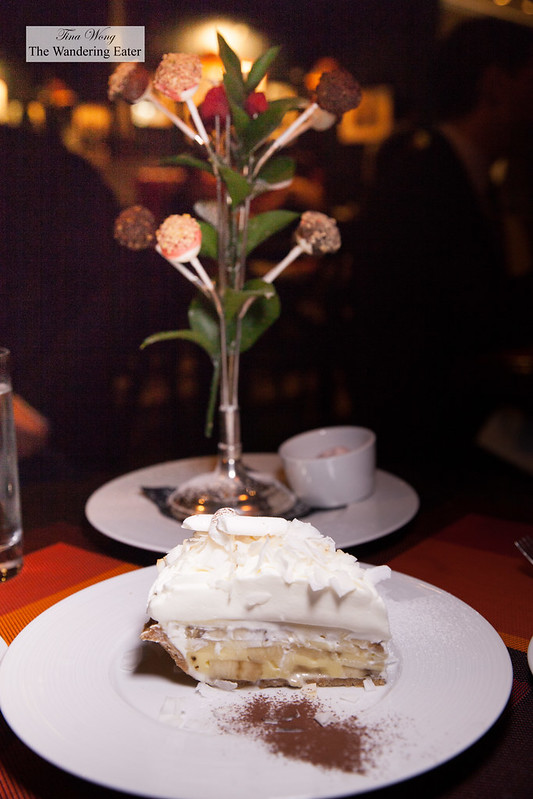 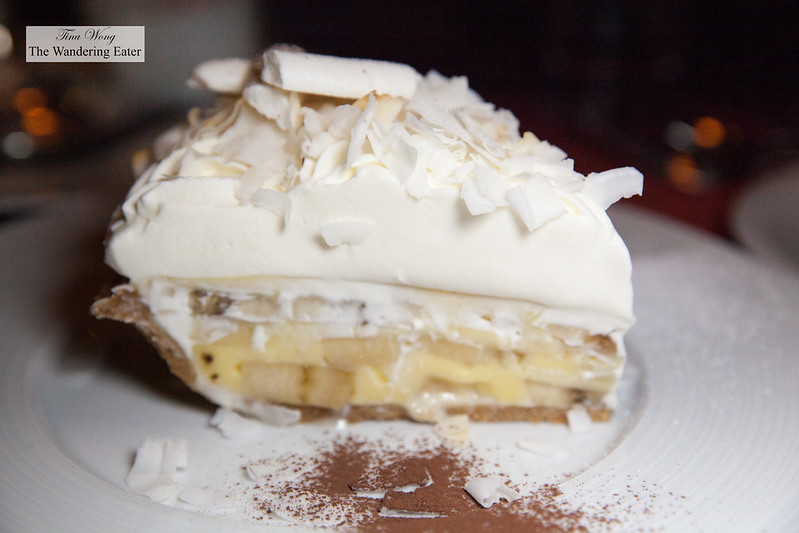 For the sweet ending, we must have the classic Burke dessert of cheesecake lollipop tree and a large wedge of coconut banana cream pie. The cheesecake lollipop tree was good as expected. You may dip the bubble gum whipped cream if you crave nostalgia and extra sweetness. We really enjoyed the coconut banana cream pie. This huge, creamy, dreamy pie struck the right balance of coconut and banana flavors and the side of luscious dulce de leche sauce made that pie so much more craveworthy (even though I felt like I ate for two people).

Overall, our dinner here was good with potential to be better (it’s a little more than two months old, so it’s a very new restaurant). Service is great. Our waiter was attentive and we had a few front of the house staff checking up on us if everything was good. The latter noticed we weren’t thrilled with our drinks and was more than happy to replace it with another drink. The food is uneven on certain dishes but again, since the restaurant is still young, I’m forgiving the small issues and the flavors are definitely there. I would certainly come back in the near future and it’s a great addition to the neighborhood that doesn’t have many options of upscale American fare.