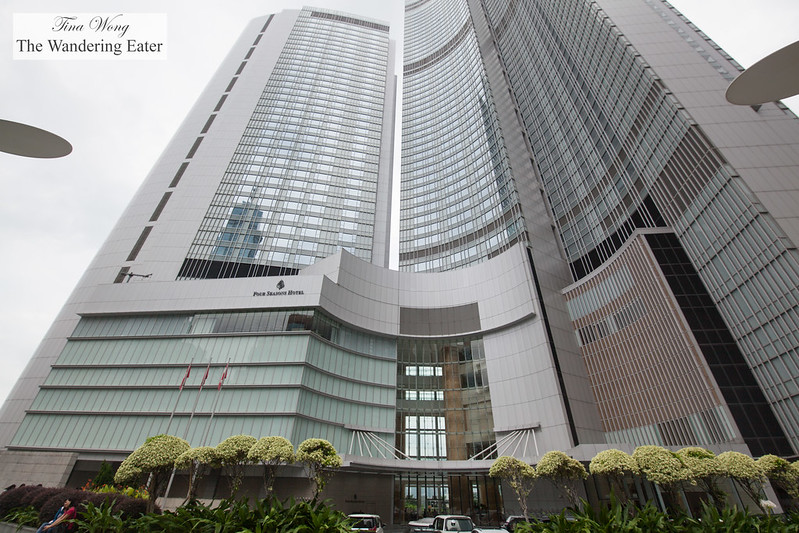 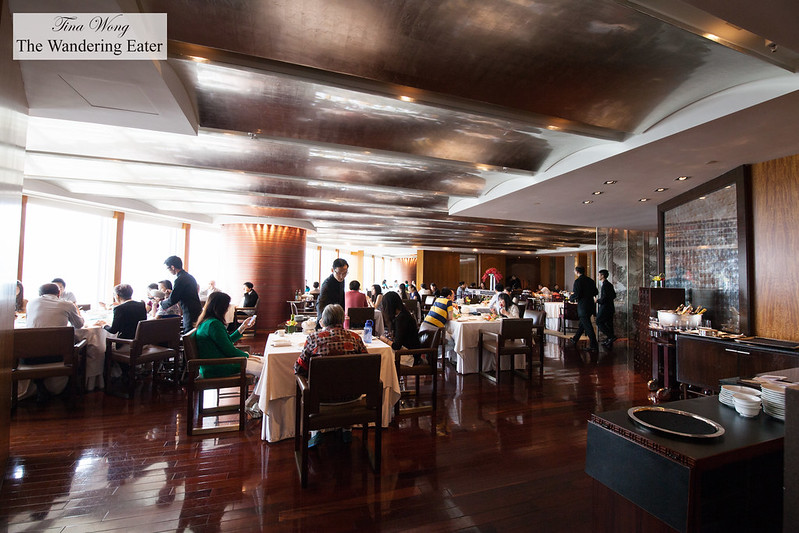 When we arrived to the fourth floor and enter the restaurant, the staff was welcoming. The restaurant itself is adorned with discreet Chinese motifs, polished woods and – a standard for any high-end hotel eatery in this city – views of Victoria Harbour.

This restaurant is very popular and primarily filled with affluent locals. If you want dinner reservations, you should book about a month in advance. If you want the coveted lunch reservation (since they serve dim sum then) that would be three months ahead. Getting a table by the window with that lunch reservation also has a wait list for that too but we got lucky. 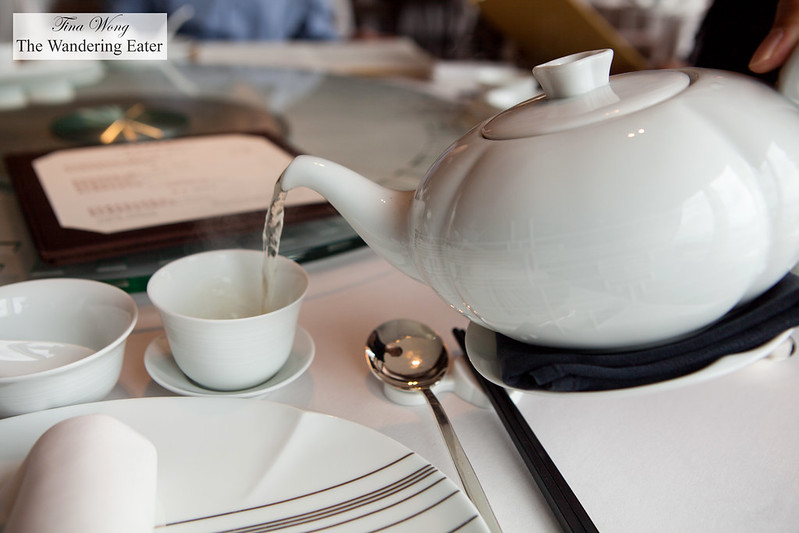 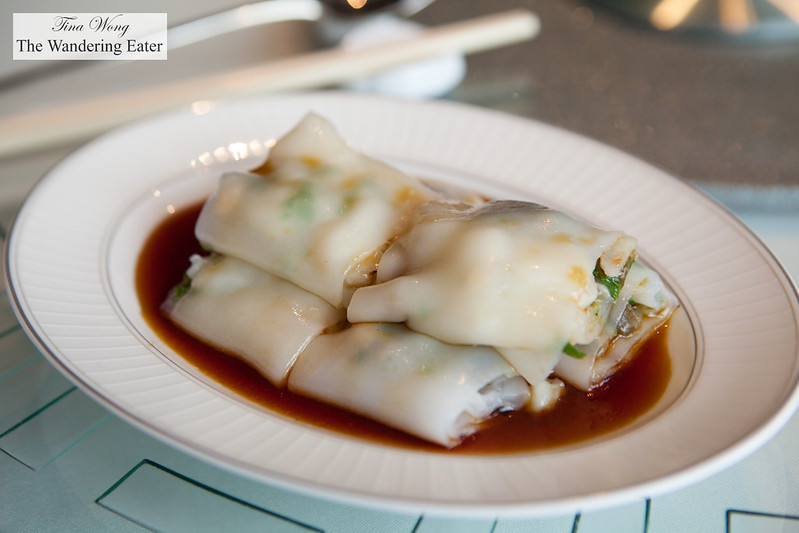 Starting off with our pot of Iron Goddess oolong (also known as tieguanyin; 鐵觀音) tea and ordered our choice of dishes.

Waiting about ten minutes, our first dish arrived – steamed rice roll with beef chuck and preserved vegetables (90 HKD). The rice roll was good and the ingredients were fresh and cooked perfectly. 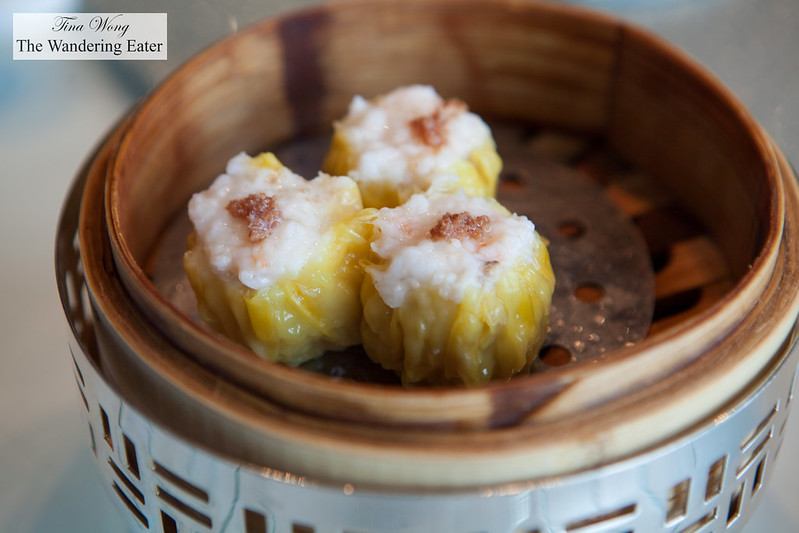 The steamed shrimp and pork dumplings with Yunnan ham (72 HKD, $9.29 US) was supposed to be an amazing dumpling since it has the best ham in all of China. However, the flavors somehow fell short and steamed a minute longer than it should since it tasted a bit dry. 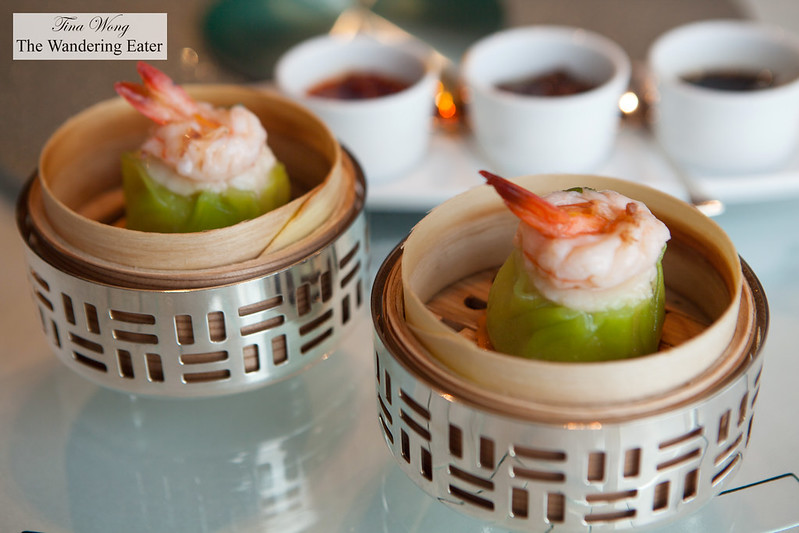 The steamed lobster and scallop dumplings (52 HKD per piece, almost $7 US each) were about twice as large than an average shumai (燒賣) and topped with a large prawn. This was much better than the previous dumpling. The filling was delicately sweet from the scallop and lobster and it was firm yet juicy texture. 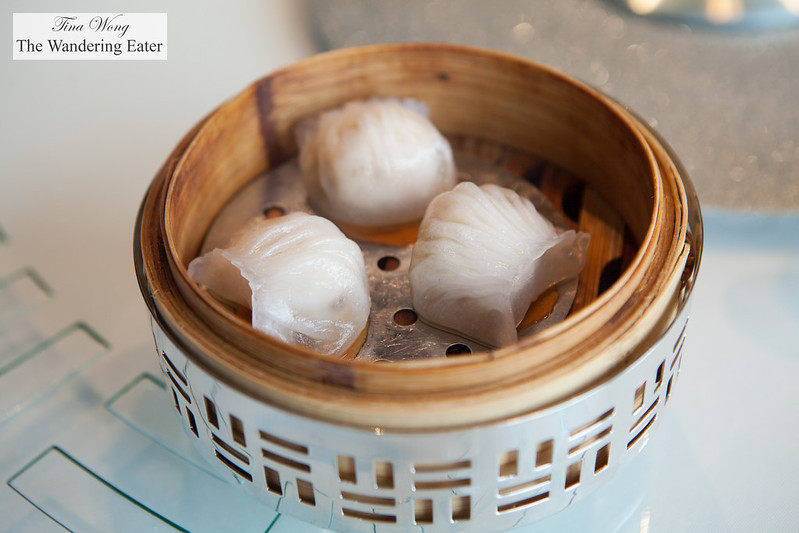 The basket of steamed shrimp dumplings with sarcodon aspratus was a good ha gaw (蝦餃) despite the fact the skin wasn’t transparent and thin enough. Good flavors from the shiitake mushrooms (or sarcodon aspratus listed on the menu) and the sweet fresh shrimp. 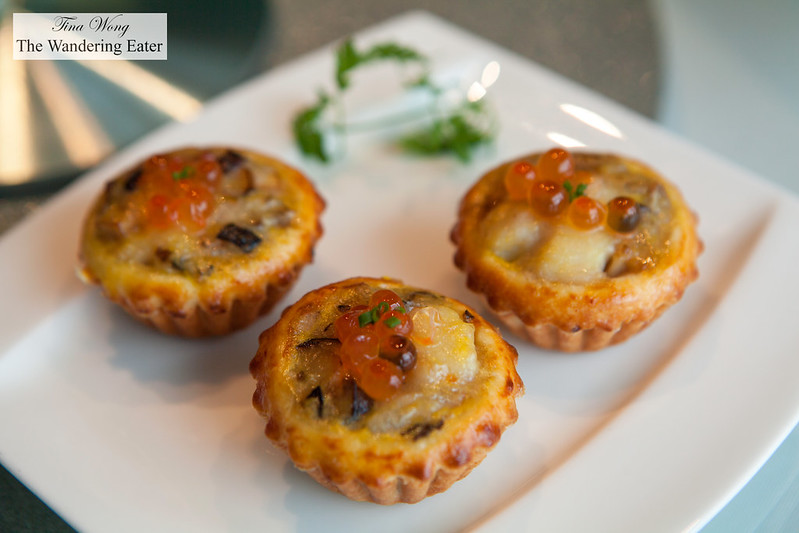 The baked scallop puffs with salmon roe (72 HKD, $9.29 US) were good. The crust was buttery and flaky but the filling was on the salty side. 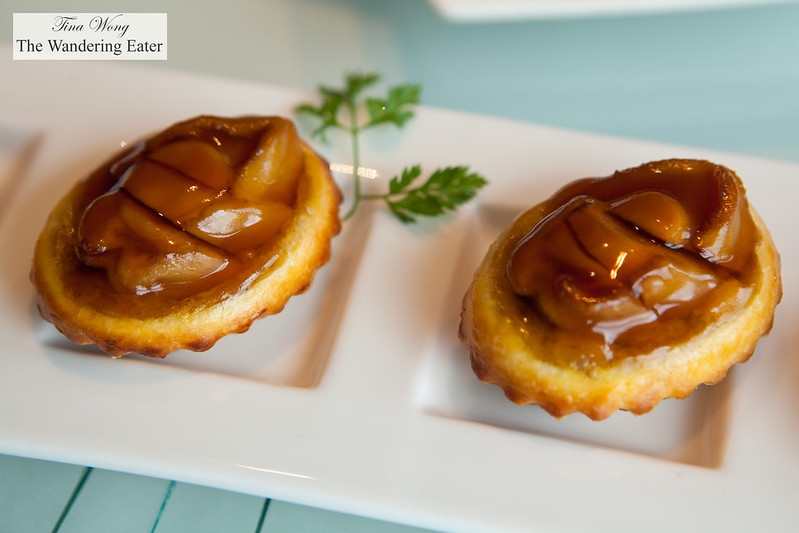 The baked whole abalone puff with diced chicken (62 HKD per piece, $8 US each) was the best savory dish we had. The pastry was wonderfully buttery and flaky. The abalone was silky, tender and it has the distinctive buttery, ocean-y flavor. 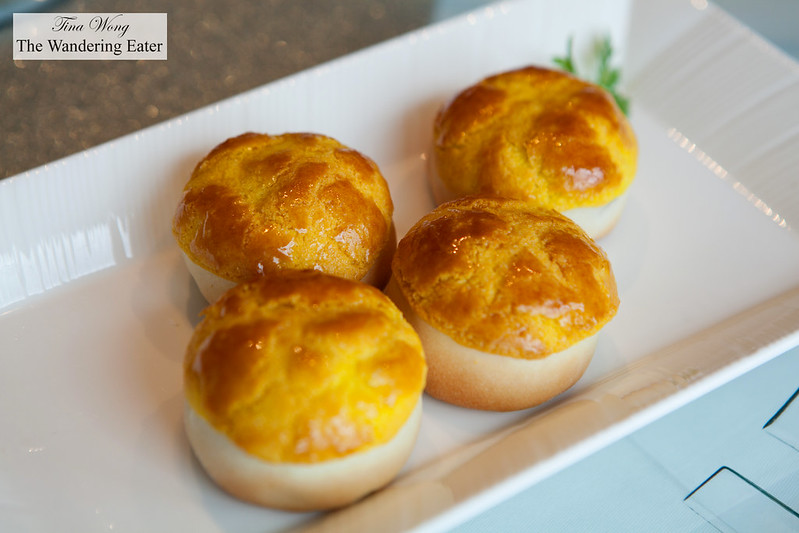 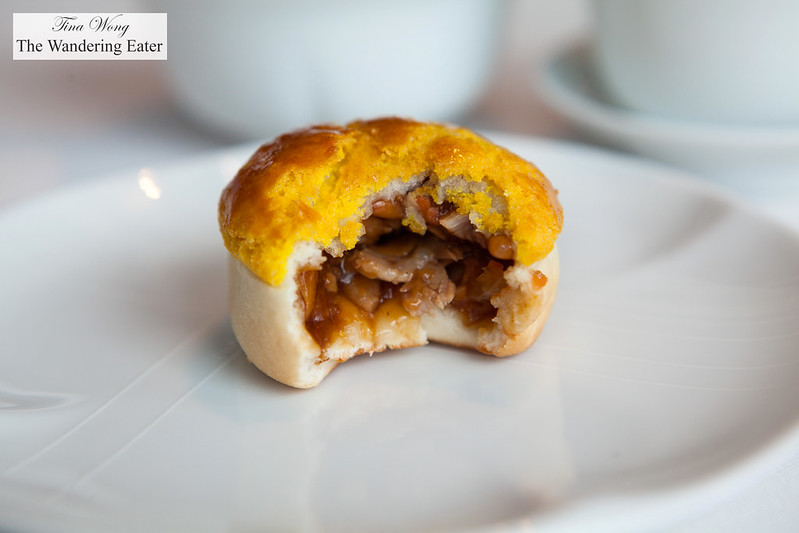 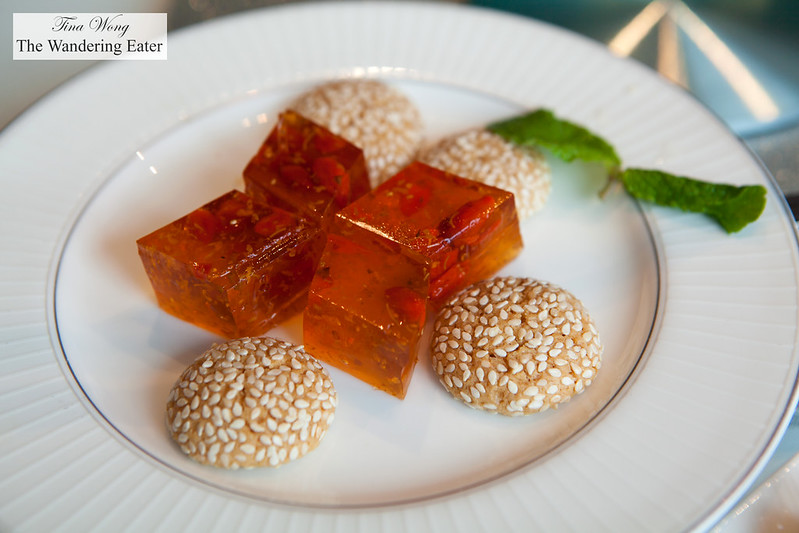 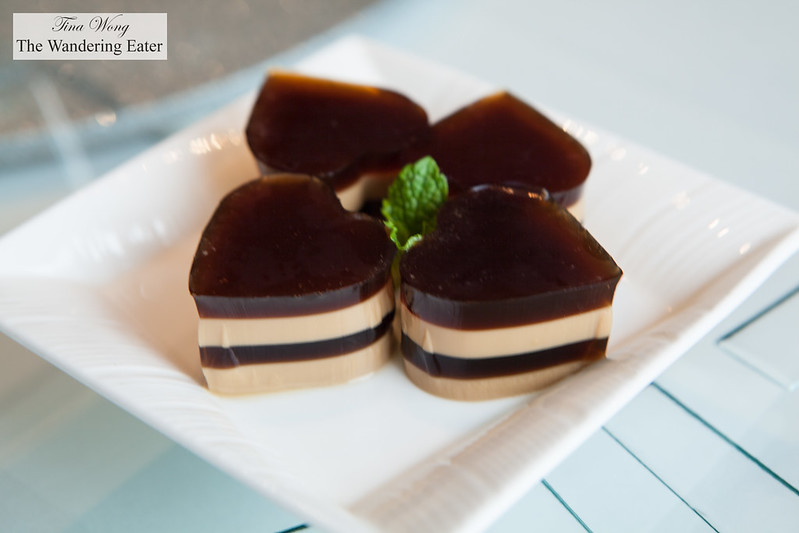 Dessert were petit fours of goji and osmanthus tea jellies and sesame cookies and layered coffee jellies. All were very good as the jellies weren’t too firm and they were not too sweet. A nice sweet ending to the meal.

You might be wondering, does this restaurant warrant its 3-star rating? I think it’s more of a 2*. Service was fine; our waiter was polite and attentive enough. But my expectations for a 3* restaurant of any kind is to consistently be “wowed” by the food, both in technique and flavors. I ended up having a few that were eye-opening wonders and the rest were just good. My guess of this uneven cooking was due to executive chef Chan Yan Tak wasn’t cooking the day we were dining there or the kitchen was having one of those “off days” that can happen even to the best restaurants.