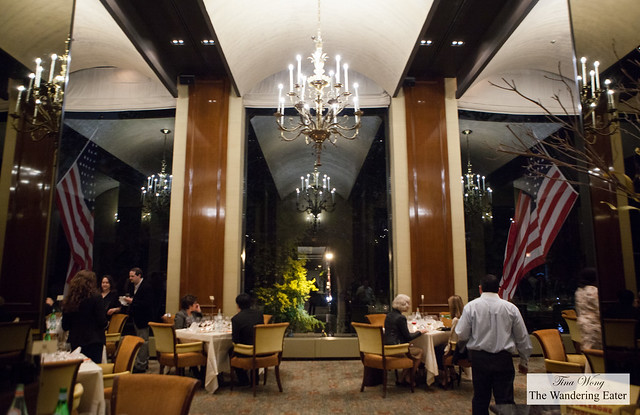 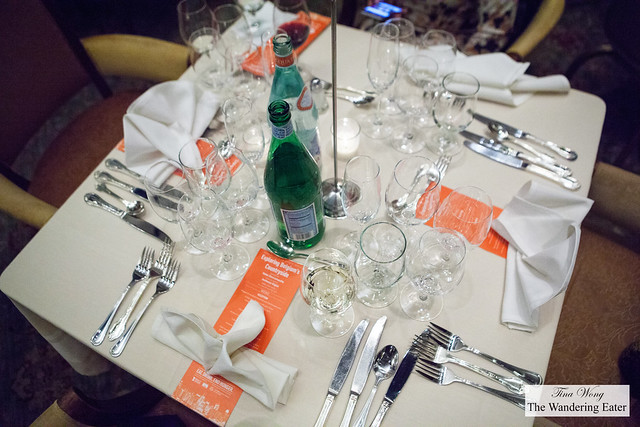 One of the most special and unique dinners at NYC Wine & Food Festival was Exploring Belgium’s Countryside hosted by Kobe Desramaults of the 1* Michelin rated restaurant, In de Wulf at Park Lane Hotel. What makes Chef Kobe Desramaults stand out is the fact he is not from here locally (even our neighbor across the pond, the United Kingdom) and his style of cooking is not like what I would find in the States.

Chef Desramaults goal for this dinner was to have elements of his restaurant’s style of food and flavors (and trying to sneak in some local Belgian plants into our food that evening) while still accommodating to the American palate without dumbing it down. 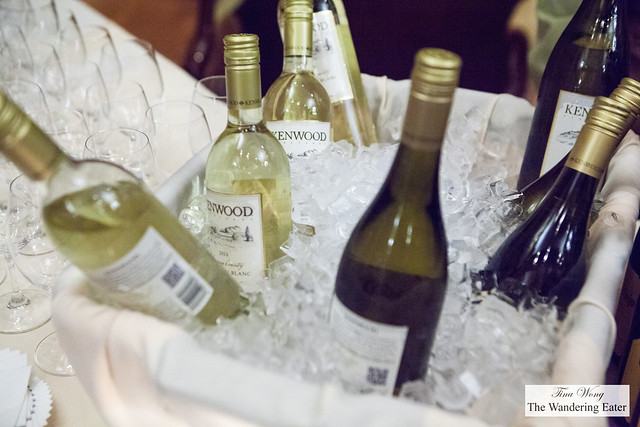 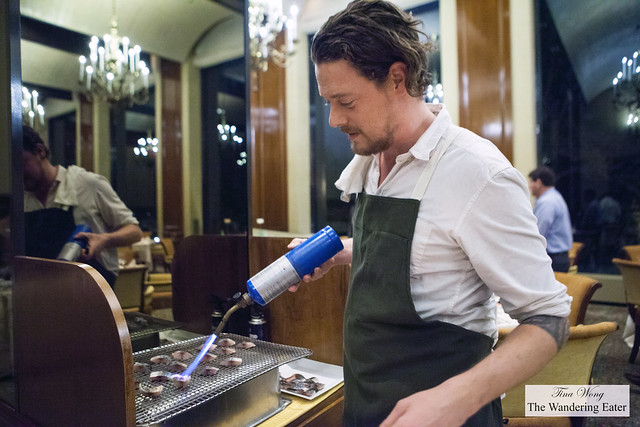 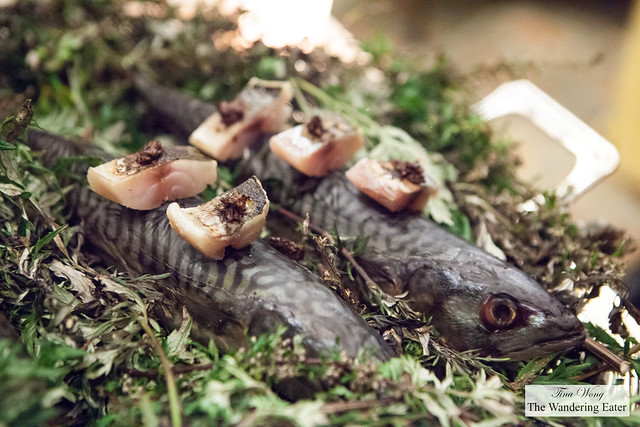 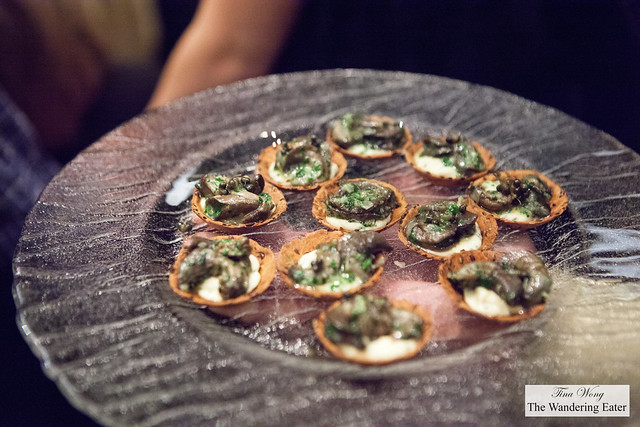 We were greeted with wines of Kenwood Rioja and Sauvignon Blanc and Chef Kobe Desramaults and his sous chefs making blow torching mugwort smoked mackerel and topping them with dabs of homemade miso. The silky, gently smoked mackerel with herb was forward with the fatty, oily flavors of the mackerel as the finishing notes. I heard that the homemade miso is not soy based but used a different plant and fermented it to the point it’s like a dark, complex salty miso. There were a few plates of crispy flaxseed tart with pork brain that was unexpected. The crust was wonderfully crisp and the cool, creamy pork brain mixture was slightly offal but tasted good. 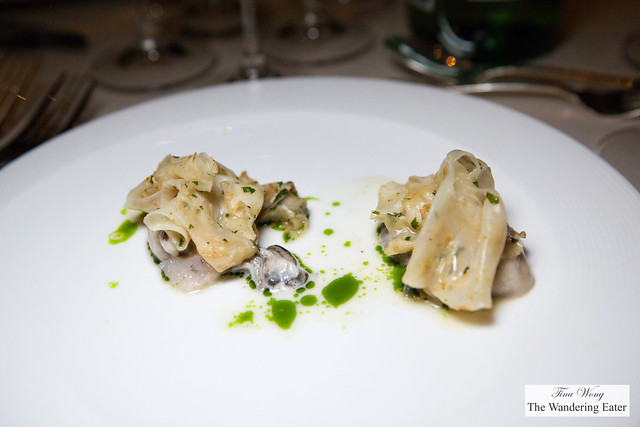 Our first course was oysters and seasonal vegetables in poached whey sauce. It’s all soft and silky textures that tasted like raw oysters with a bit of tang from the whey. 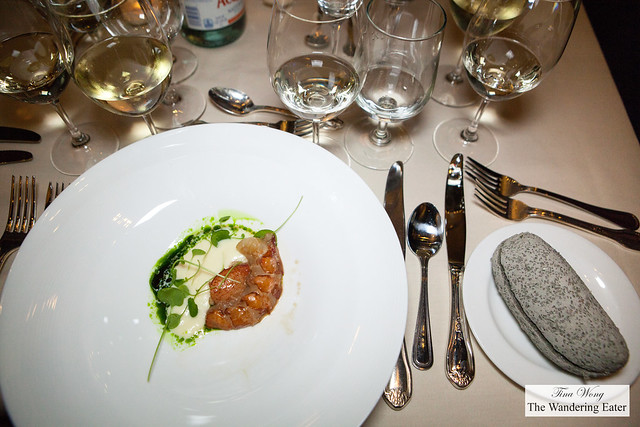 Lobster “kerre melk stampers” and potato cooked in salt crust was up next. Unfortunately, we were not informed as to what is “kerre melk stampers” is exactly but going on what I tasted, this was great. Silky, almost feels like raw lobster meat. A creamy, milky cheese to add a subtle salinity and acidity and the puree of arugula brightened up the dish. The potato roasted in a thick dark gray-black salt crust served on the side was delicious and perfectly seasoned and cooked. 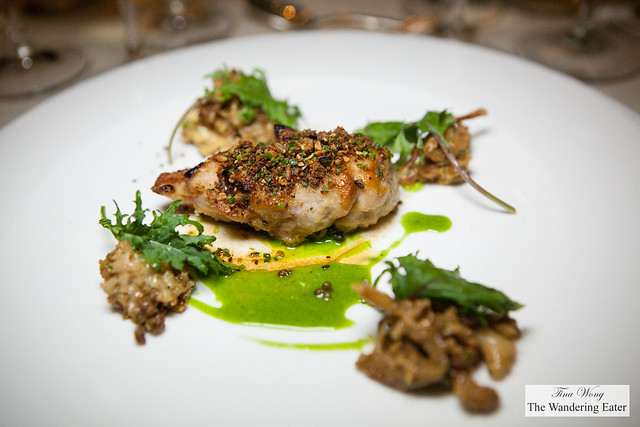 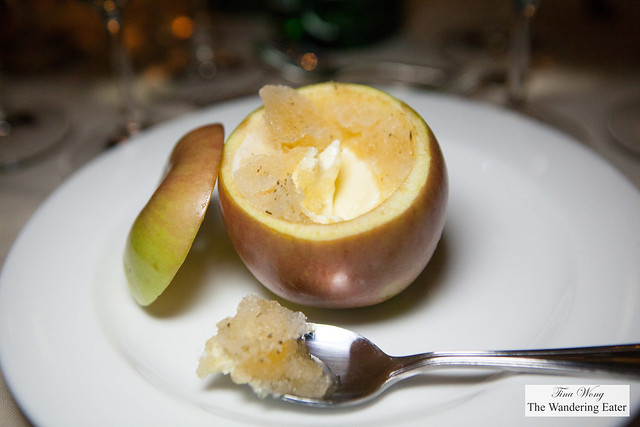 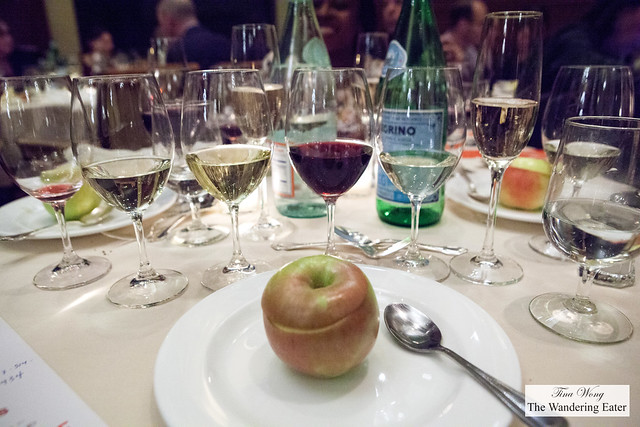 For dessert, we had “Apple and hogweedseeds.” Essentially what seems like a Fuji apple hollowed out, filled with this sweet vanilla then topped off with an apple granita gently spiced with hogweed seeds. This was a simple dessert but it was fantastic for it not being too sweet and there’s some complexity.

This dinner was definitely unique compared to anything I will ever eat in New York City and I did like this meal in terms of the taste and the ingredients that aren’t used in the U.S. (or even China) does make me curious of Chef Desramaults’ food at his own restaurant. I need to travel to Dranouter or Belgium, in general someday soon.