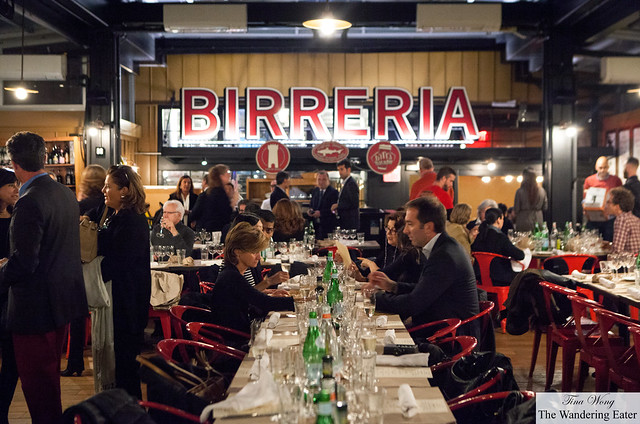 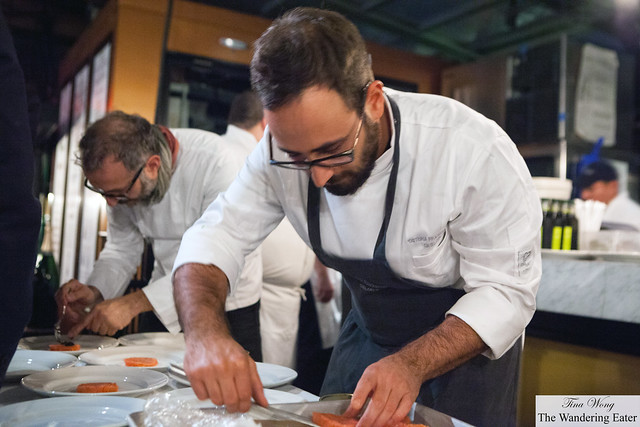 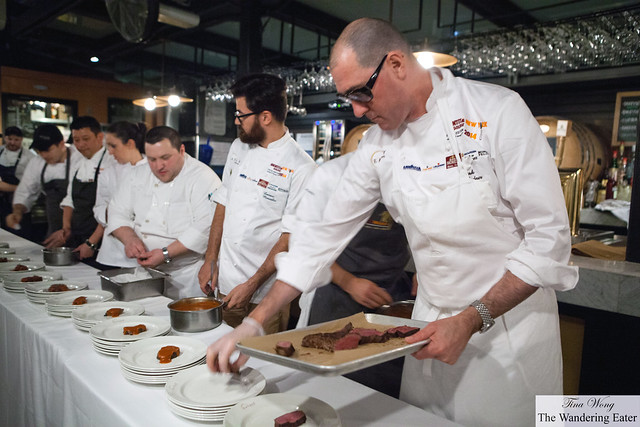 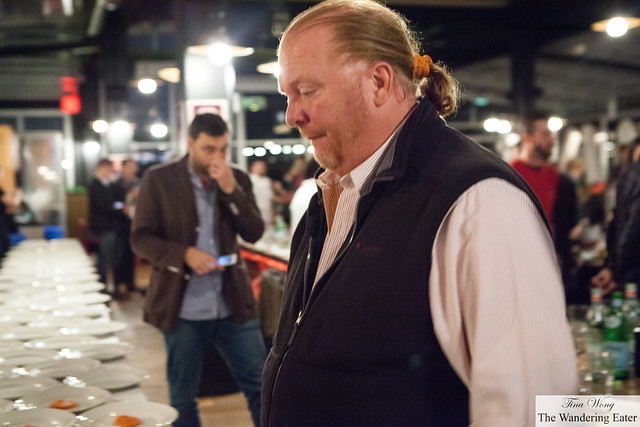 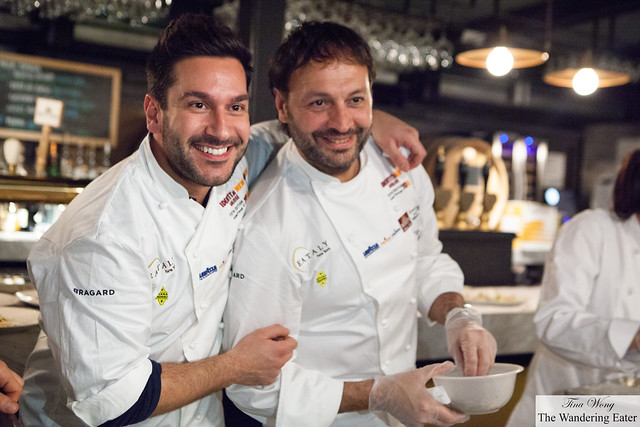 Identità Golose New York 2014 at Eataly is a the organization’s fifth year and focused on the meeting of seven famous chefs from the New York City area and seven famous Italian chefs that honor to Italy. It’s an open-ended theme compared to previous years giving the chefs the freedom to cook what they like but tie back to Italian heritage.

I was honored to be the invited guest of Grana Padano to attend Mario Batali’s hosted dinner at Eataly’s La Birreria located on the 14th floor of this busy Italian megastore. (Friday night was hosted by the grande dame of Italian cuisine in America Lidia Bastianich.) La Birrera is their rooftop beer garden but they converted to an event space and closed off the roof since it’s quite chilly. 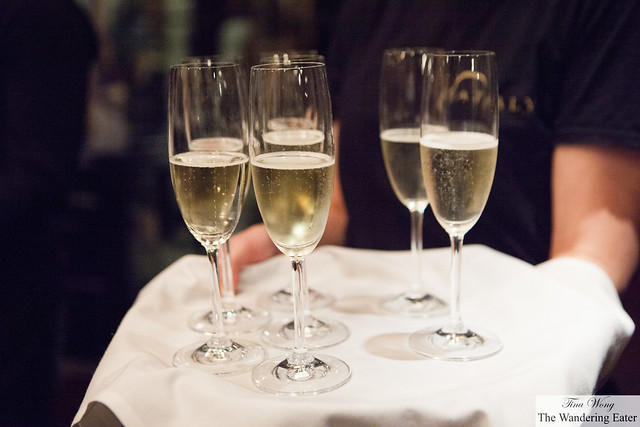 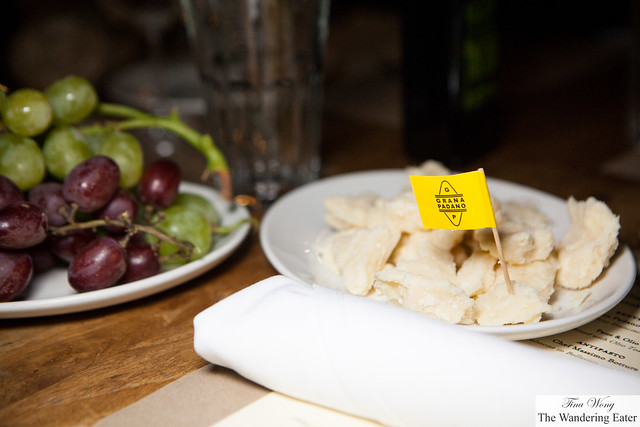 We kicked things off with glasses of Cuvee ’61 Brut Franciaorta DOCG NV, Berlucchi to pair with our 25-month Grana Padano cheese and grapes. The wonderfully minerally but not too sharp cheese was a good starter to graze while the chefs were working hard to plate our first course. 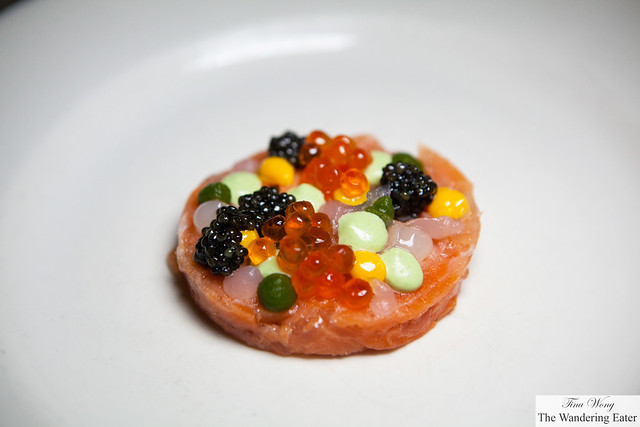 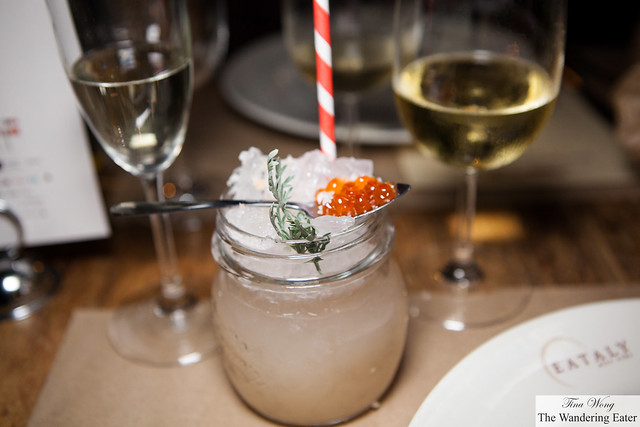 Our first course of “Back to the Future” — Salmon tartare in Bellavista with Calvisius Osetra Royal Caviar by Massimo Bottura tasted as good as it looks. Fresh, silky, fatty salmon meets the prized, firm, nutty caviar and bursts of briny sweetness of salmon roe, dotted with creamy avocado and other fruit gels. Every bite is a different experience and it was brilliantly done.

Chef Lorenzo Cogo’s collaborative cocktail named Kren Julep paired with Bottura’s salmon dish was very unique. He said he was taking the flavors and ingredients of Bottura’s dish and mostly put it into his cocktail and laced it with some absinthe to tie the flavors of salmon and salmon roe neatly. 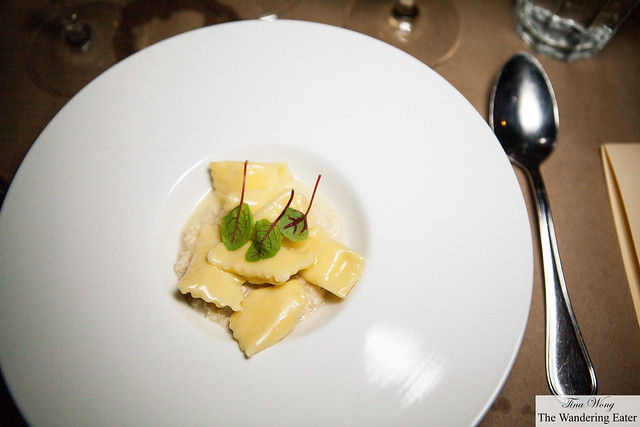 The next course by Chefs Ugo Alciatai & Alex Pilas served the potato and ricotta agnolotti del plin with rabbit ragù. This was my favorite savory course of the night. The perfectly cooked pasta was delicate and balanced with the potato and ricotta filling. The rabbit ragù was equally light and as the agnolotti and just gave enough rabbit flavor. Nothing was competing over each other and perfectly balanced. 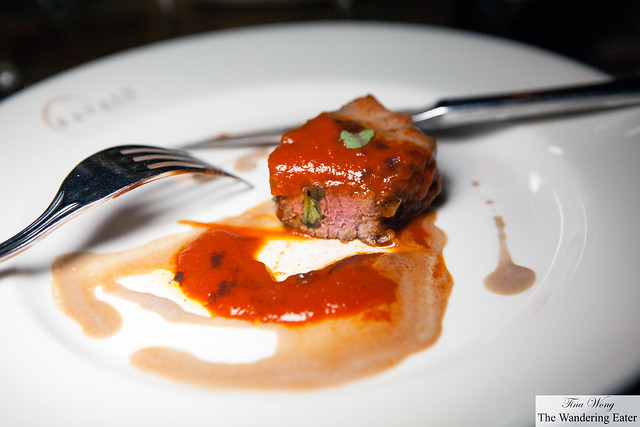 The meat dish by Chef Mark Ladner and Chef Luciano Monosillo called Manzo all Pizzaiola was a very good beef dish. Super tender, sous vided beef that’s just seared on the outside and the tangy tomato sauce and a light beef gravy worked that you taste what’s simply stated. 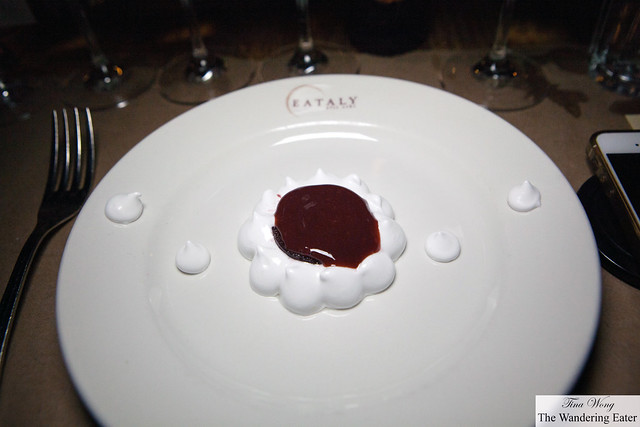 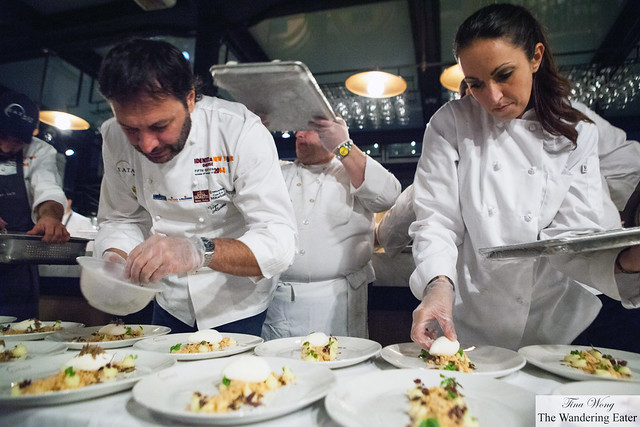 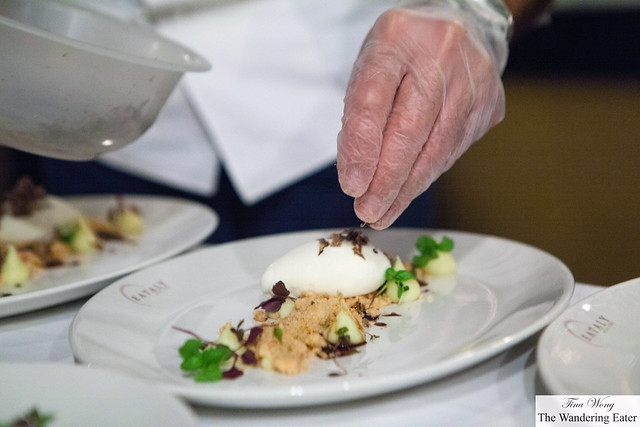 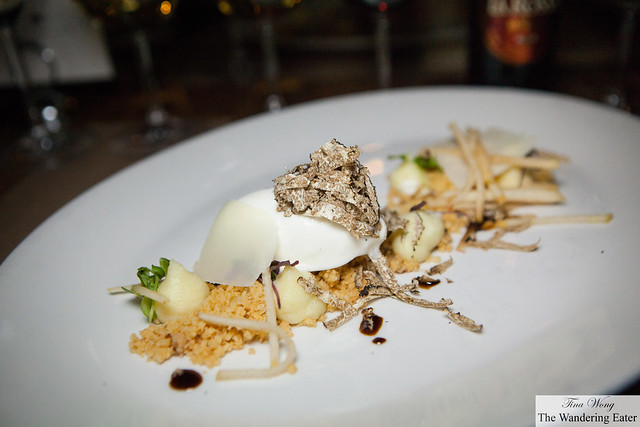 The dessert that everyone was talking about by Chef Denny Imbroisi finally arrived — Grana Padano gelato, extra virgin olive oil crumble, black truffle shavings, 25-year old balsamic vinegar, Pink lady apple cream. This is what I would think of as a composed cheese plate in dessert form. This is the dessert of my dreams as I love my desserts a bit unusual. The creamy cheese gelato had the distinctive Grana Padano flavor and salinity but sweet enough to be dessert. The black truffle shavings and olive oil crumble played along the savory notes of the cheese while the apple cream and sweet balsamic vinegar sweeten the dessert ever so slightly. 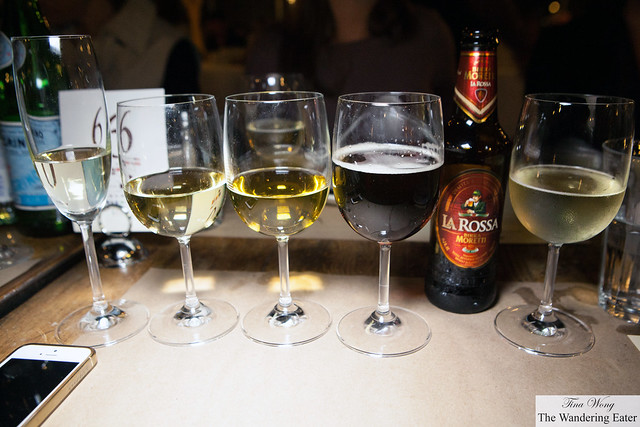 We had a wines and a beer paired with our dinner besides the mentioned cocktail. They were thoughtfully paired as it enhanced the dishes flavors. Here’s what we drank:

This dinner was simply amazing and worth my Saturday night to meet the chefs, the guests who are seated around you, and the service was great despite them serving over a hundred people.