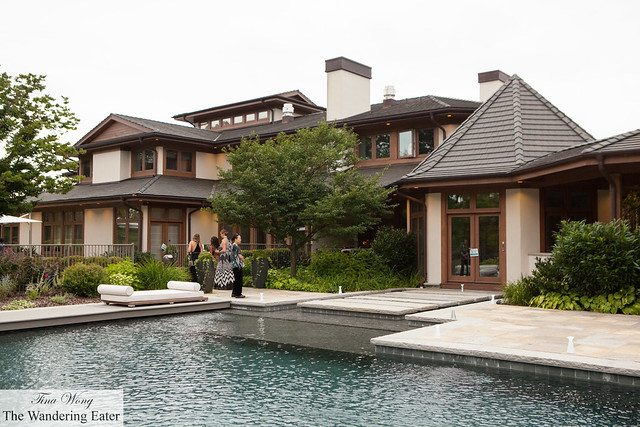 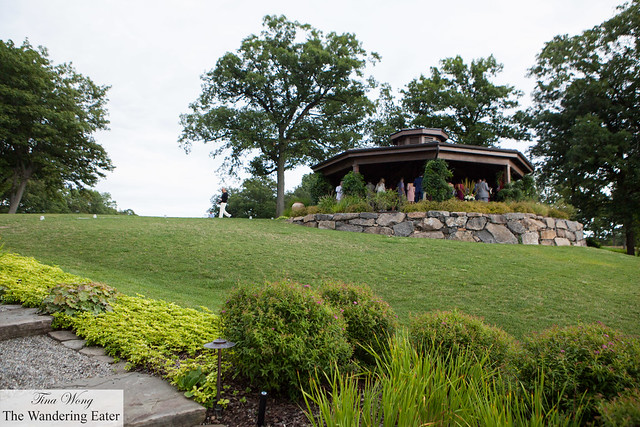 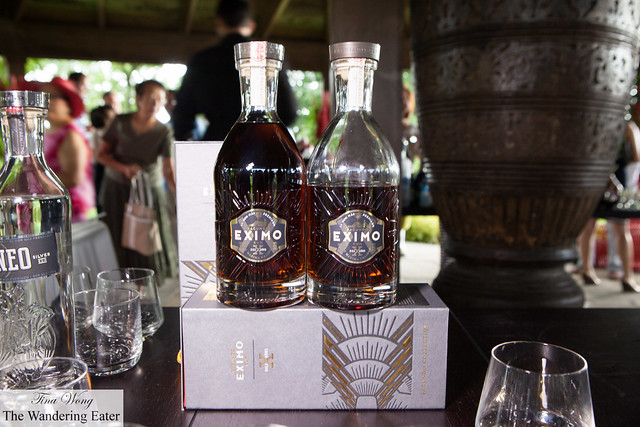 This past weekend, we were invited to a fundraiser dinner called Under the August Moon, hosted by PhilDev at one of their board members’, Mrs. Gail Alvarez gorgeous Anahata Estate in Northern New Jersey. PhilDev is a non-profit organization that seeks to advance the Philippines’ economy with the advancement of science and technology through programs in high-tech education, research and entrepreneurship training.

This particular dinner has a cocktail reception at the gazebo found at the owners’ home and imbibed on the exclusive aged Bacardi-owned rums while schmoozing with the friendly attendees. 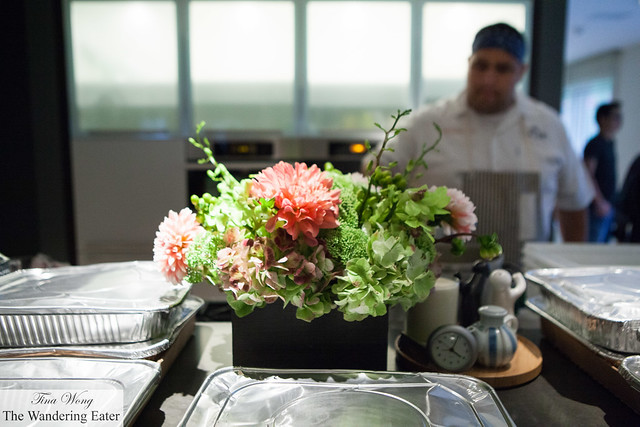 While the cocktail reception was happening, in the house a number of the well-known New York based Filipino chefs — King Phojanakong of Kuma Inn and Umi Nom, Dale Talde of Talde and Pork Slope, Neil Syham of Lumpia Shack Snackbar, and Edie Ugot of Spotted Pig — worked in the large kitchen of the house with their own station. 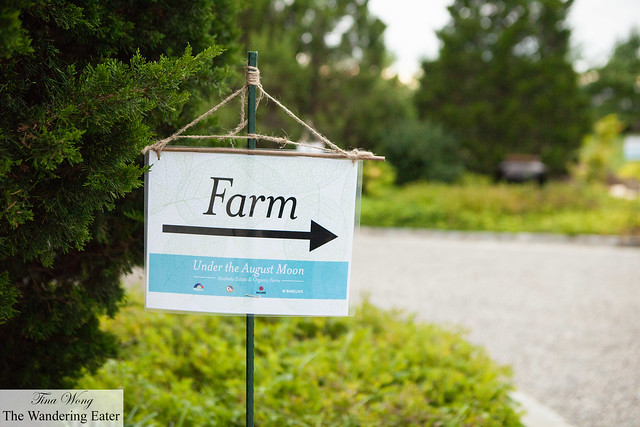 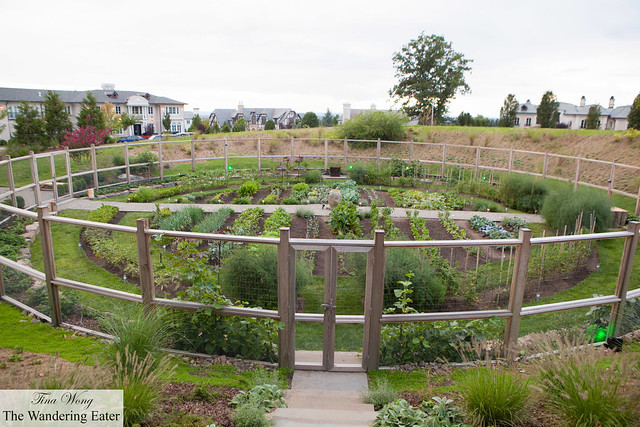 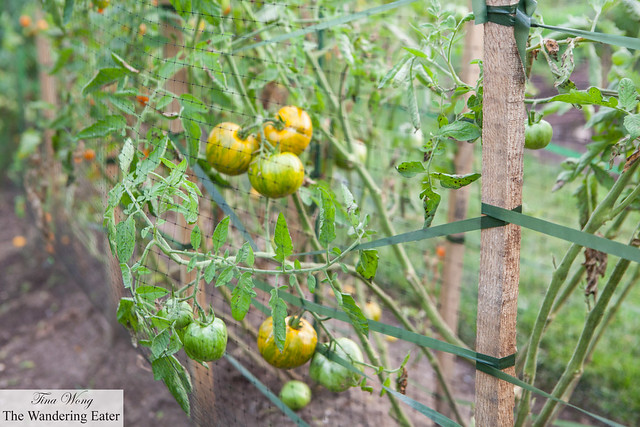 To the farm; the organic farm; various vegetables grown

When cocktail hour was up, we’re informed to follow the sign to the farm, where the home owners take pride in growing their own organic vegetables (as seen above). 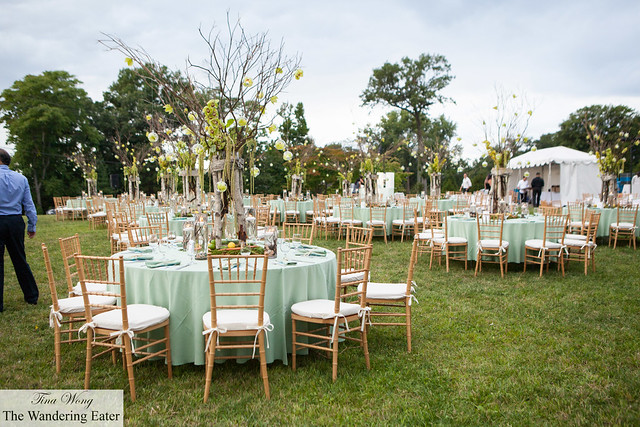 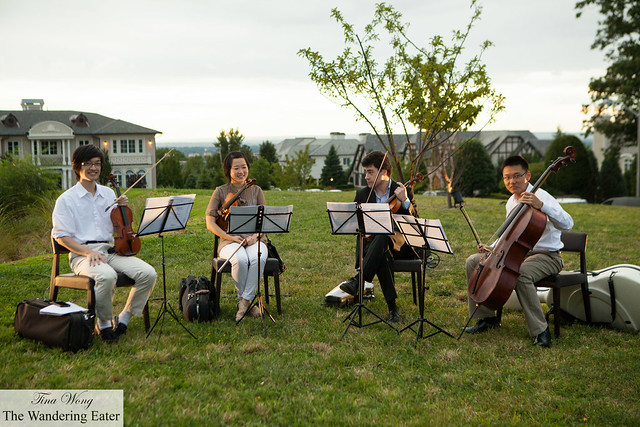 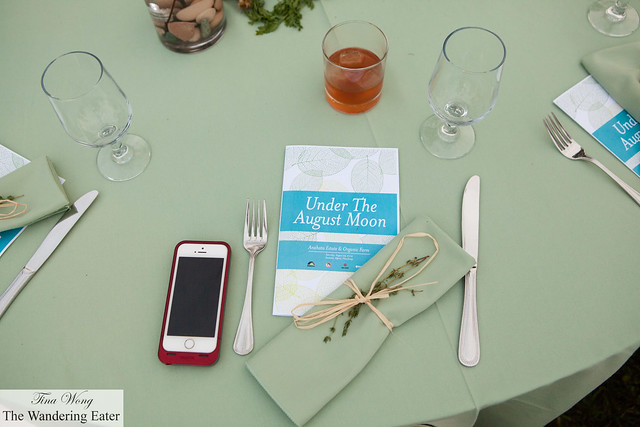 We all had assigned tables and you can’t help but be in awe of the beautiful table setting and the large tree and orchid centerpiece. There was also a live classical quartet to entertain us for the first hour of the dinner. There were still Bacardi cocktails served and there were cocktails paired with the courses served during the dinner. 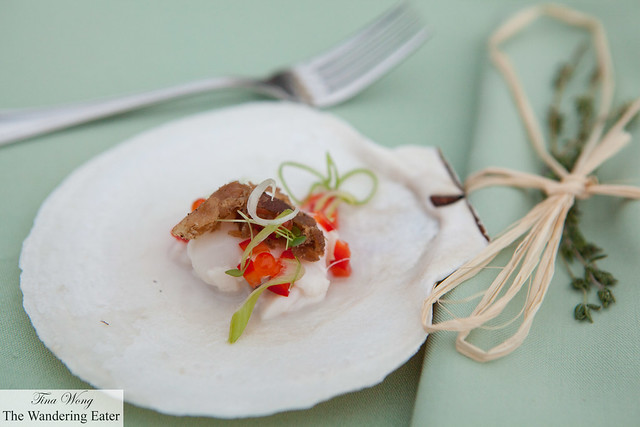 There was an off-menu amuse bouche of scallop ceviche topped with a crunchy, salty pork rind, salmon roe, sweet bell pepper and scallions. Cool, refreshing, and the clash of sweet, salty and a touch of acid was wonderful. This delectable amuse was created by the collaboration of Nicole Ponseca of Maharlika and Jeepney restaurants and Chef Miguel Trinidad. 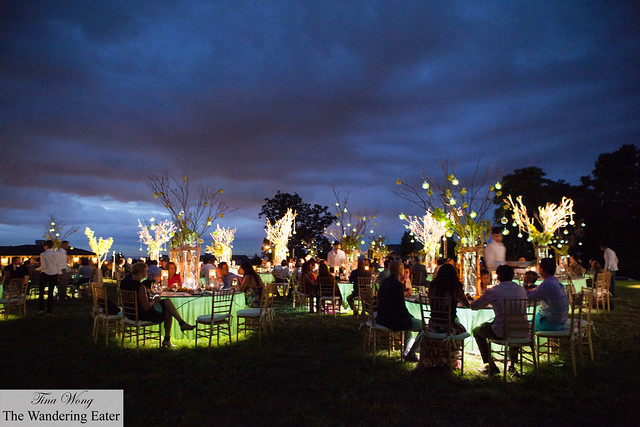 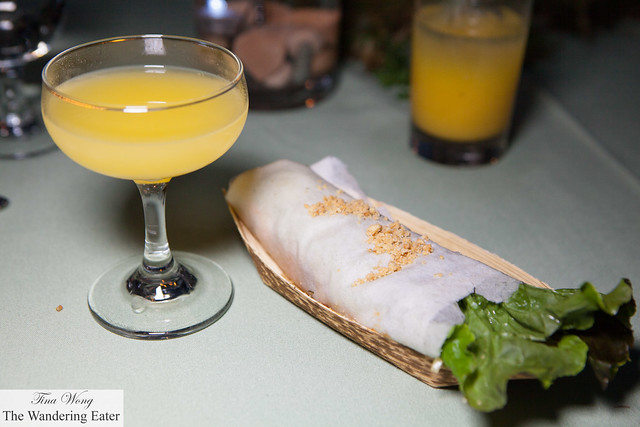 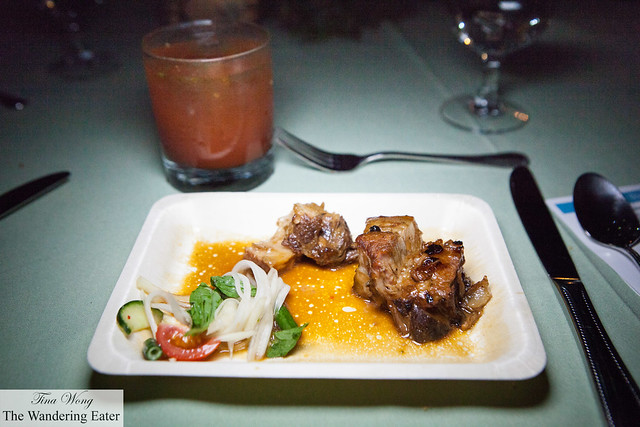 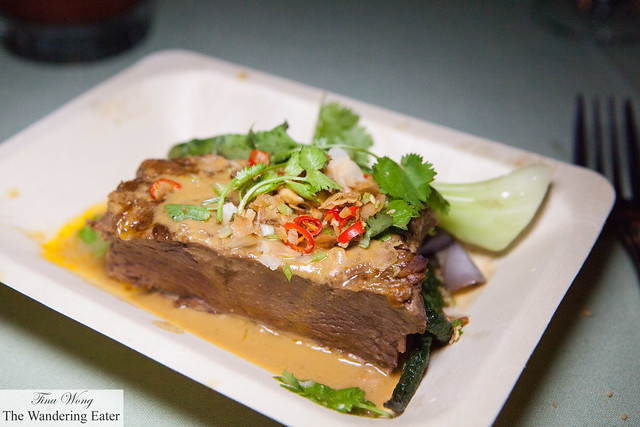 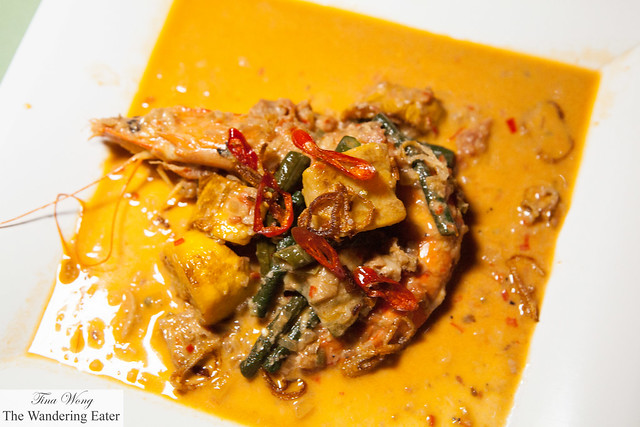 We had a five delectable and elegantly, rustic courses that were mainly rooted in traditional Filipino cuisine. The first course of lumpiang sariwa by Neil Syham of Lumpia Shack Snackbar was a delightful cold spring roll wrap that made me wish to have this everyday for lunch. It’s hearty yet tastes refreshing and the mix of sweet heat and salt was perfect.

The tender pork adobo by Chef King Phojanakong was delicious (and thankfully, thought out in terms of portion size) and we adored the background sweetness with the sharp soy sauce. The short rib kare kare by Chef Dale Talde was a statement main course from the generous slab of delectable, supple beef. The kare kare is traditionally an oxtail stew but Talde made it upscale but kept it traditional with the wonderful peanut sauce and the bit of spicy chili peppers to keep your palate awake.

Chef Edie Ugot gave us Binagoongang Hipon, a rich, sweet-spicy coconut milk stew with shrimp paste served with shrimp (but she used a large prawn about the size of my palm). If I had to be a nitpicker, it needed a scoop of fluffy white rice and this dish would be perfect. 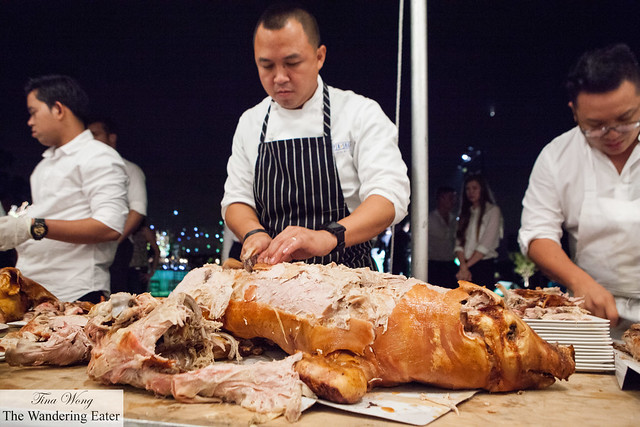 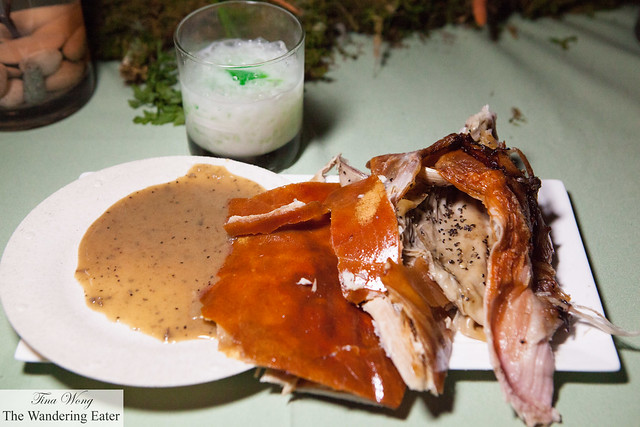 There was a time gap between the first five courses up to the pièce de résistance — the lechón, a spit roast pig that has a super crispy skin since it rendered out from its fat roasting slowly for hours over an open fire. For me, I found it pretty cool to have the opportunity to these glorious suckling pigs being divvied up. 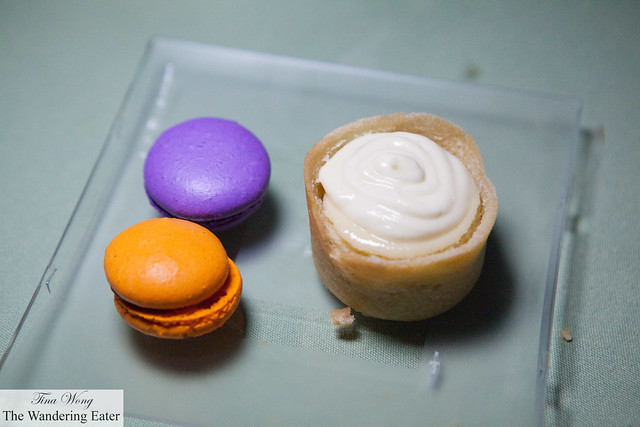 We finished off with a sweet note of mango and ube (purple taro) macarons and calamansi (a type of lime like citrus indigenous in southeast Asia) cheesecake. The dinner ran late into the night but this dinner was fun, delicious and it was served in the Filipino way of being generous, warm and gracious hospitality. Even the private car driving us back to New York City was an unexpected touch.