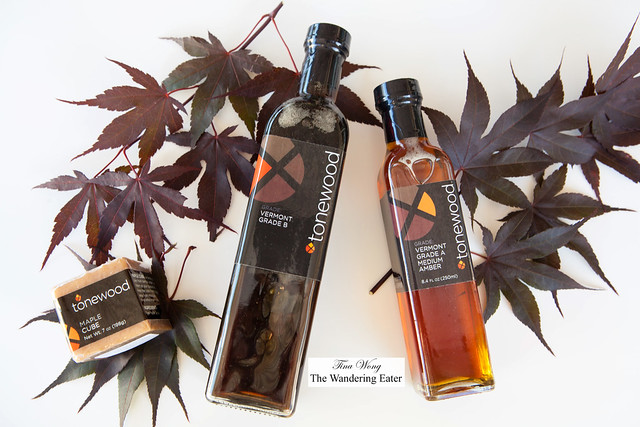 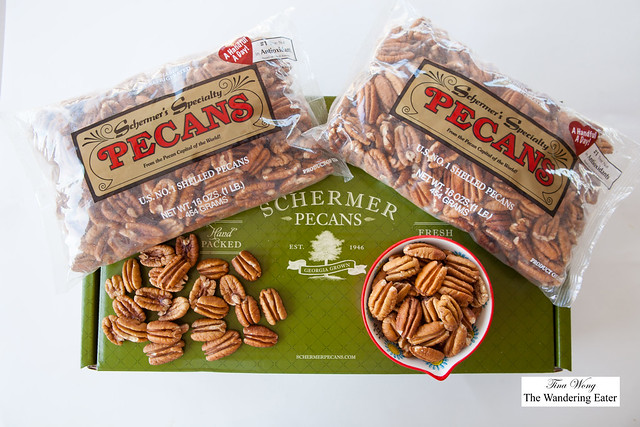 Tonewood is a Vermont based brand that creates one of the most superior maple syrups I have ever tried. They recently took home the with Sofi Gold award. Schermer is a Georgia farm established in 1946, growing one of the finest buttery pecans. As they are great by themselves as well as together.

As much as every American knows maple pecan pie, I wanted to make it a bit savory and throw in some dried thyme and a pinch of cayenne. Also to play along the savory note, I used Four & Twenty Blackbirds Pie Book‘s recipe for a butter and lard crust.

This entire concoction yield to a flaky and tender crust. The filling has the expected chewiness from the maple syrup and the savory elements of the thyme and cayenne to balance the sweetness of the maple syrup and brown sugar. Of course, you have flexibility as to how savory you want to take this pie by omitting the cayenne or lessen the amount of dried thyme or even use fresh thyme instead. 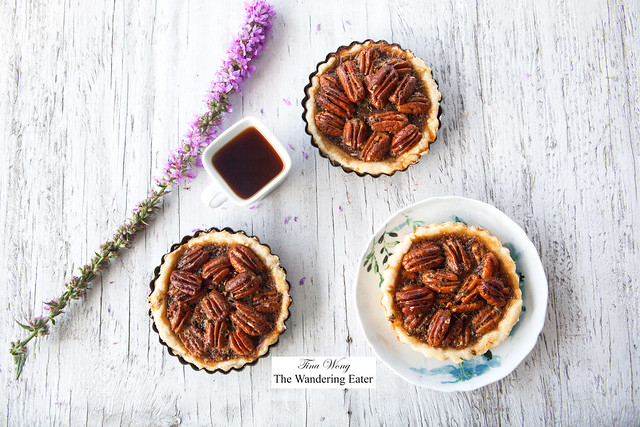 1. Heat the oven to 375°F. In a small bowl or measuring cup add the cold water, ice and cider vinegar and stir. Set aside. Put the flour, salt, granulated sugar in a medium sized bowl and stir. Add the butter and lard and blend with a pastry cutter or your fingers until the mixture resembles coarse crumbs. Add 2 tablespoons of the water-vinegar mixture and stir until the mixture forms a ball. (If the mixture is too crumbly, add additional cold water by drops.) Wrap the dough in plastic wrap and refrigerate for at least 1 hour.

2. Unwrap the dough and place it on a lightly floured surface. With a rolling pin, roll out the dough until it’s approximately 11 inches in diameter. Transfer the dough to a 9-inch pie plate; trim any dough that hangs over the edges of the plate and discard the scraps. Dock (or gently prick with a fork) the crust. Place a sheet of parchment paper over the prepared crust and fill it with pie weights (dried beans or rice will do). Bake the crust for 15 to 20 minutes; it should still look pale but just cooked. Remove it from the oven and set aside to cool.

3. Meanwhile, put the pecans in a large skillet over medium-low heat and cook, stirring frequently, until fragrant and lightly toasted, about 5 minutes; set aside. Put the maple syrup and the butter in a small saucepan over medium-low heat. Cook until the butter melts. Beat the eggs in a large bowl, and then whisk in the brown sugar, the bourbon (if desired), the vanilla, salt. Gradually whisk the hot maple syrup mixture into the egg mixture. Stir in the pecans.

4. Pour the pecan mixture into the pie crust, transfer the pie plate to a baking sheet, and bake until the top and edges of the pie are golden brown and the center of the pie is jiggly but no longer liquid, 30 to 40 minutes. Cool thoroughly, then serve. (Store leftover pie wrapped in foil or plastic wrap in the refrigerator for up to a few days.)