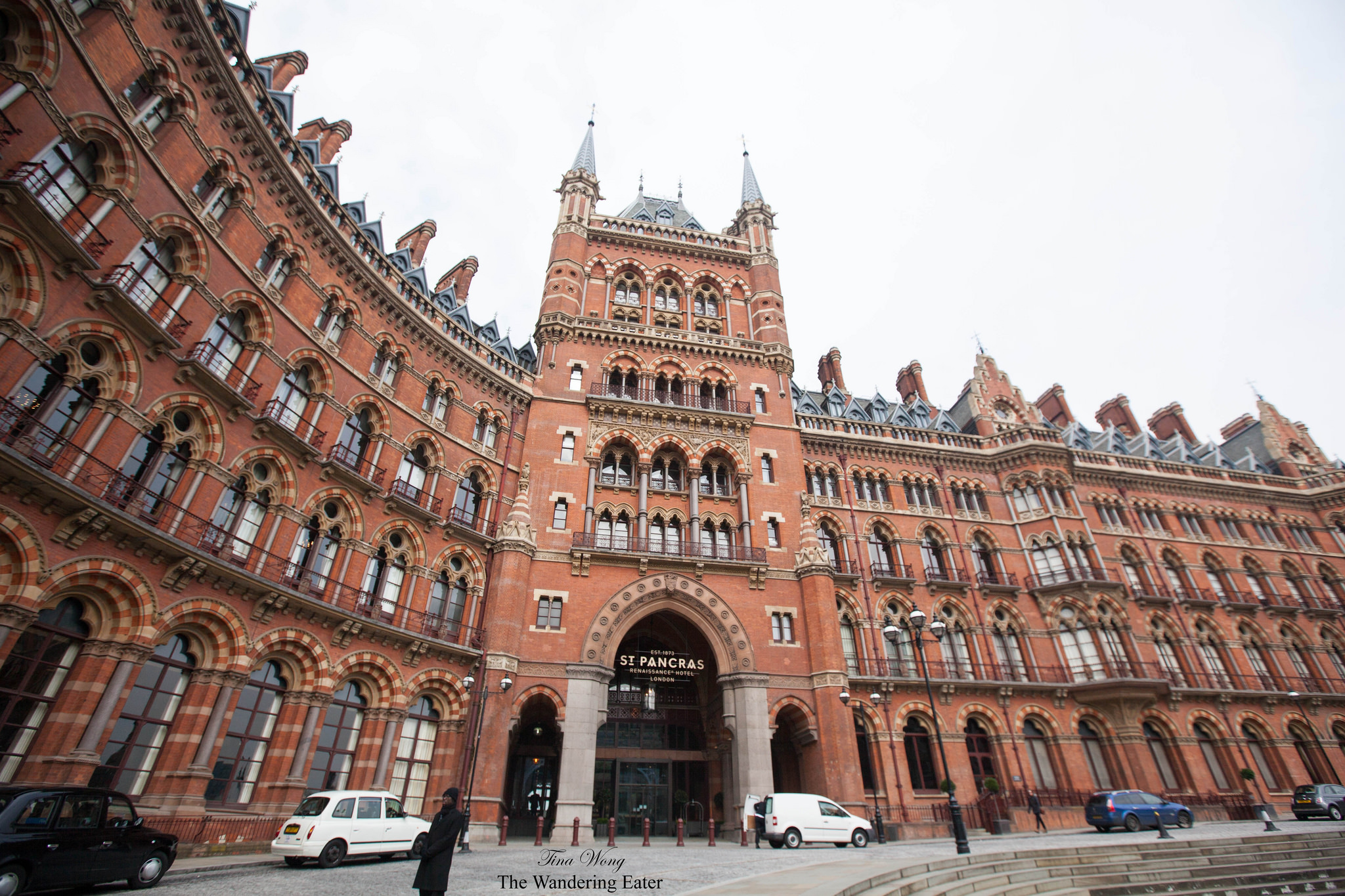 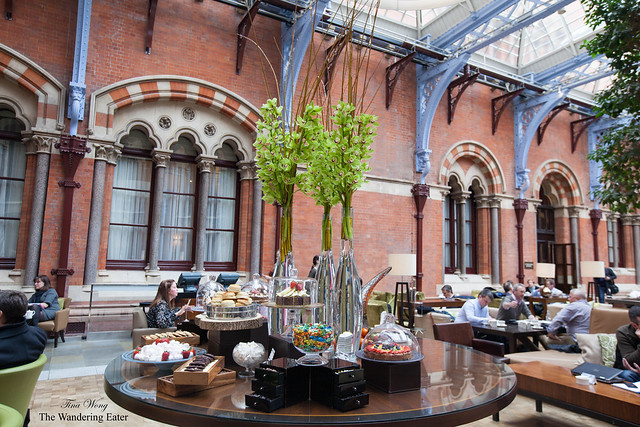 Inside Hansome Lounge, the lobby of St Pancras Renaissance Hotel

During my trip to London, I had the opportunity to stay at the historical, luxurious St. Pancras Renaissance Hotel in King’s Cross. King’s Cross in London is currently an up-and-coming neighborhood where both locals and travelers would meet since the railroad stations are here.

This hotel was built in the 1860s, when the thriving Midland Railway, which connected the industrial heartlands of the East Midlands and Yorkshire with London, chose to build its own railway and station. William Barlow owned the property and appointed architect, George Gilbert Scott to build this grand structure. Barlow’s plans included a large extravagant hotel that would extend the St Pancras westward along Euston Road. Scott had planned very grand designs that were imposing and ornate, including the signature red brick façade.

The hotel finally opened in 1873. The grandest rooms were on the lower floors, included spectacular,
18ft-high decorated ceilings, Neo-classical murals, vast south-facing windows to maximize natural day lighting into the deep floor plans, ornate Gothic fanlights over every door, wall-to-wall Axminster carpets, massive fireplaces with carved marble surrounds and walnut furniture with gold inlay. Ornate stenciling, gold leaf and flamboyant wallpapers met the eye at every turn, and the furnishings and
fittings were of the very highest quality. Construction costs back then were £438,000 – around £500 million today ($8.404 million at current rate)! 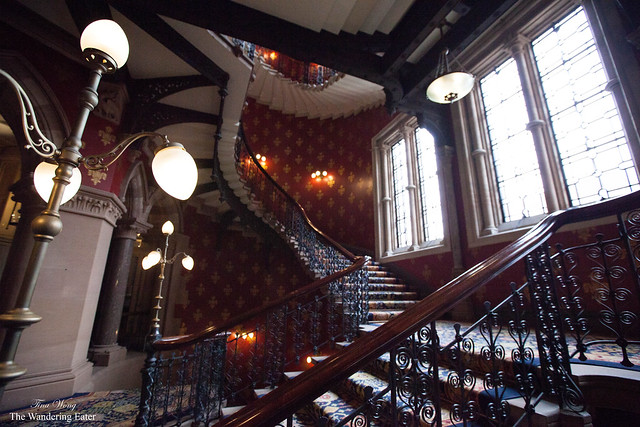 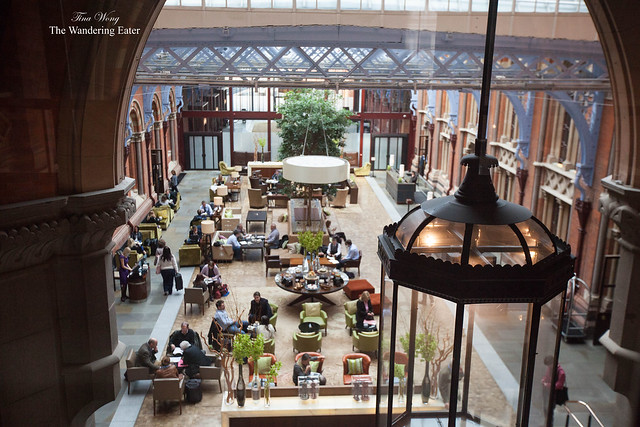 But in the 1920s, the hotel’s prestige lost its luster as more hotels sprung around town and issues like the building’s very thick concrete flooring, installing modern plumbing for en-suite bathrooms became an issue. By the 1930s, the hotel closed.

During World War II, the hotel was bombed. By the 1960s, city planners thought to demolish the building since the hotel was in ruins and it was thought to be a decadent, over-the-top building of the time. However, Sir John Betjeman managed to secure Grade 1 landmark status in 1967.

There weren’t any progress toward renovation until the mid-1990s when St Pancras Station was
chosen as the new terminal for the cross-Channel Eurostar service. In 2002, a property developer Manhattan Loft Corporation (MLC) and partnered in the latter stages by Marriott International. It took about a decade of painstaking work to restore the beauty of this edifice. The current hotel has 7 floors containing 207 rooms, and 38 suites. 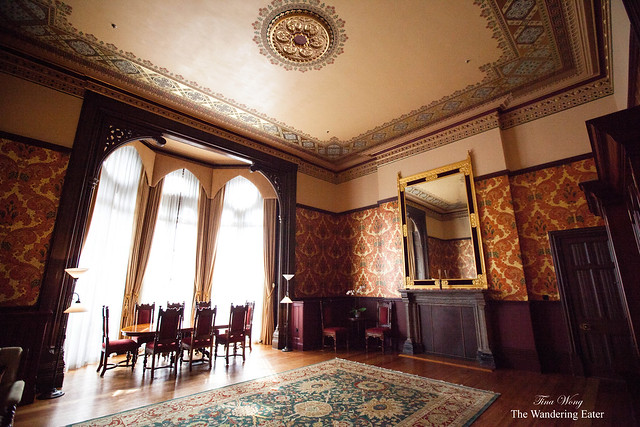 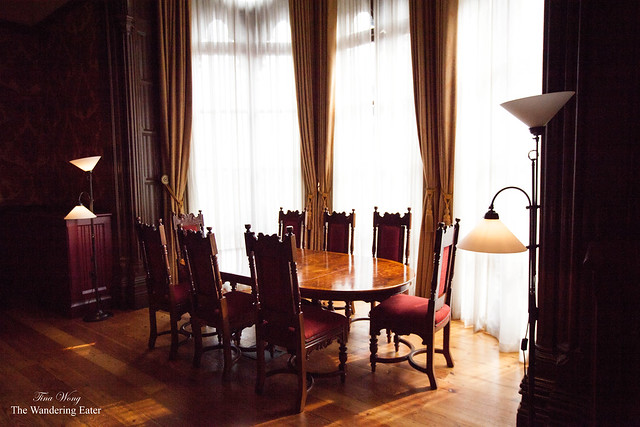 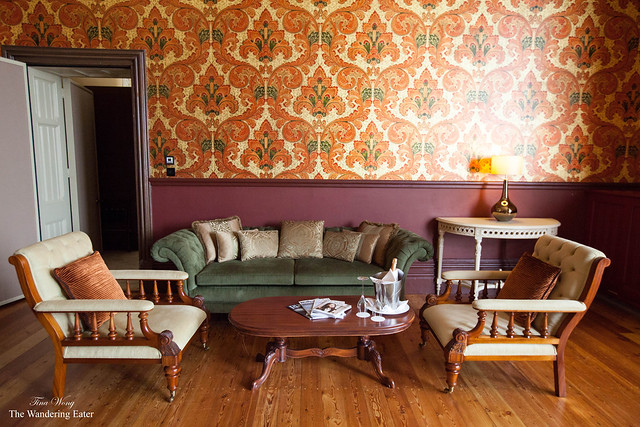 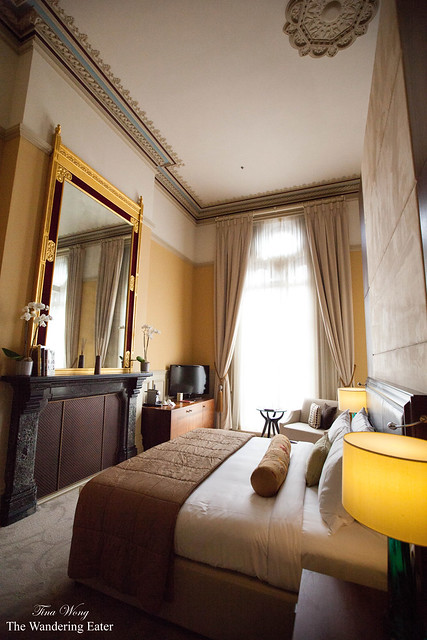 I was lucky to stay in the Sir George Gilbert Scott Suite. This stunning, 150-sq meter (almost 1,615 sq ft) suite felt like there were stories to tell, if these walls could talk. The warm tones of the gilded patterned wallpaper, high ceiling, and wood floors felt all at once comforting yet stately. There the spacious living area shares a formal dining area that could seat eight toward the large window, plush couches and sofas to sit down to chat and entertain.

The next room over would be the bedroom that’s fitting for a very good, luxurious night’s sleep. 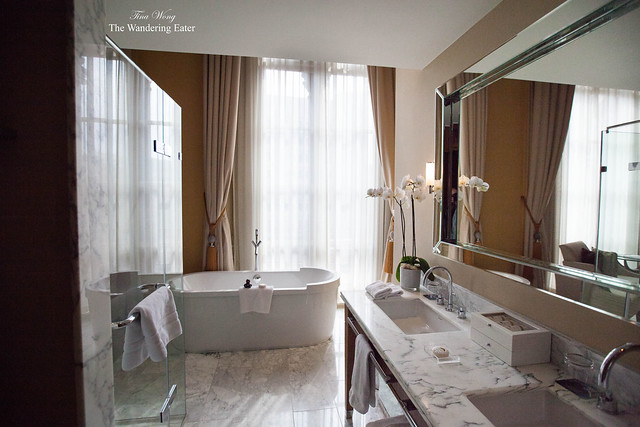 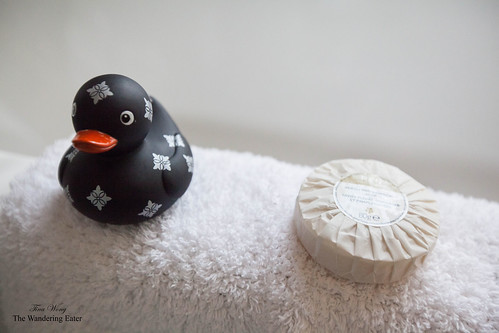 The very modern streamlined bathroom adjacent to the bedroom, has a separate shower and bathtub (with the adorable black rubber duck with white fleur de lis and REN soap). This bathroom felt like an en-suite spa to rejuvenate myself after an entire day wandering and sightseeing London. 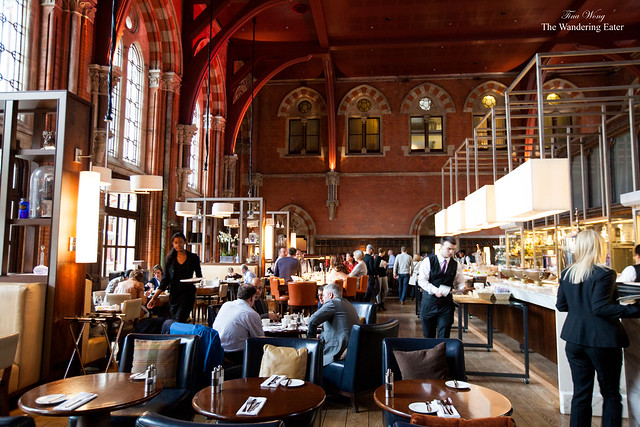 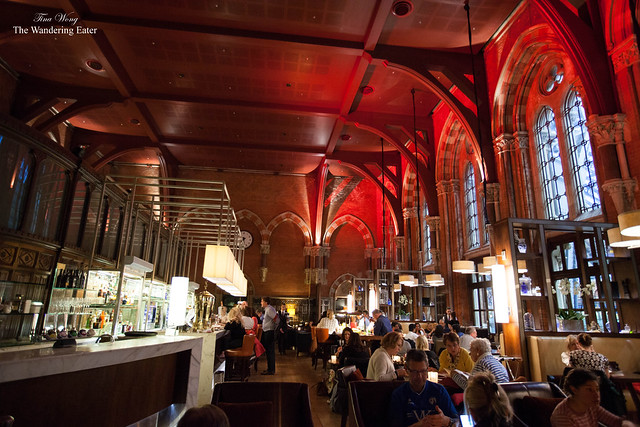 The Booking Office is a restaurant and bar that’s within the St Pancras Renaissance Hotel. Like the building itself, this place make a statement for daytime dining for breakfast to a quick drink during the evening with its layout and the long marble bar. 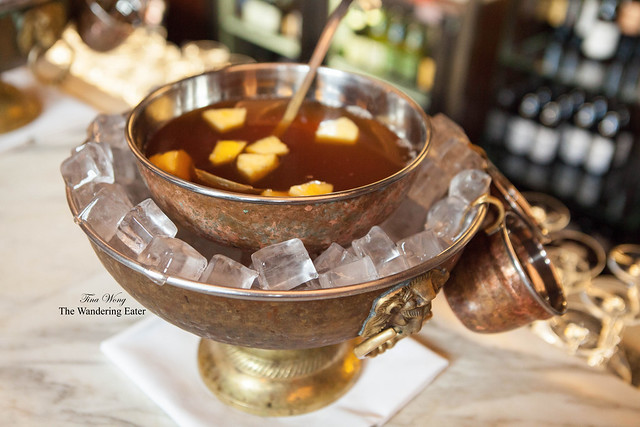 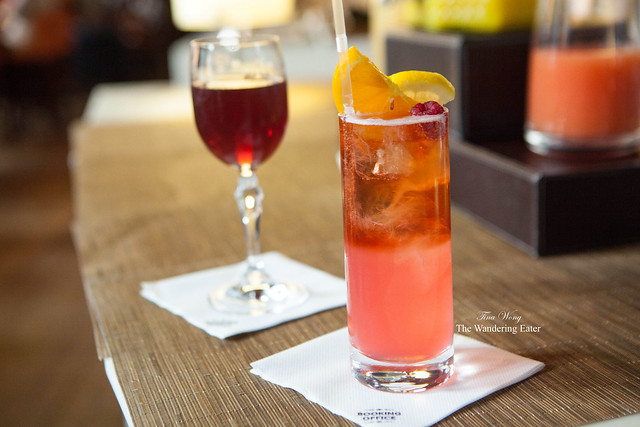 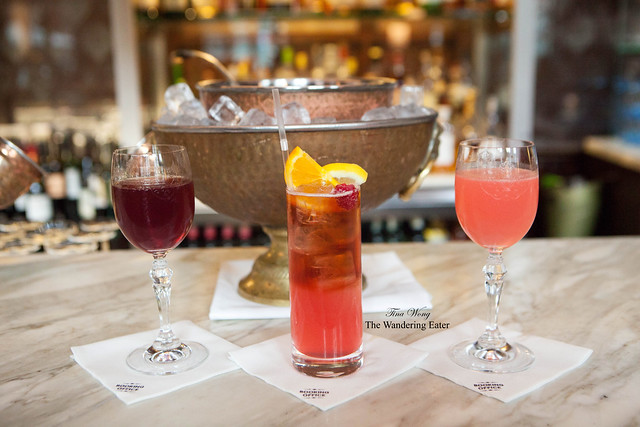 The Booking Office is known for its offerings of punches. However, since I didn’t bring a crowd with me, I opted for their beautiful yet potent cocktails like the refreshing Victorian Manhattan made of sweet vermouth, bourbon, Angostura bitters, curacao, lemon zest (£11.50) is a refreshing yet brooding, old school cocktail (and I like Manhattans), and the East India cocktail which is a shaken cocktail of curaçao, pineapple syrup, maraschino, cognac and lemon oils (£11.50) that fruity yet had a controlled sweetness that I liked.

Believe it or not, there’s a low alcoholic option that you do see, Criterion Lemonade made of powdered sugar, lemon juice, raspberry syrup, soda water and floated with ruby port and topped with slices of oranges and fresh raspberry (£8.50). This beautiful cocktail looks like a true cocktail and it will save you the future hangover (a plus for me). 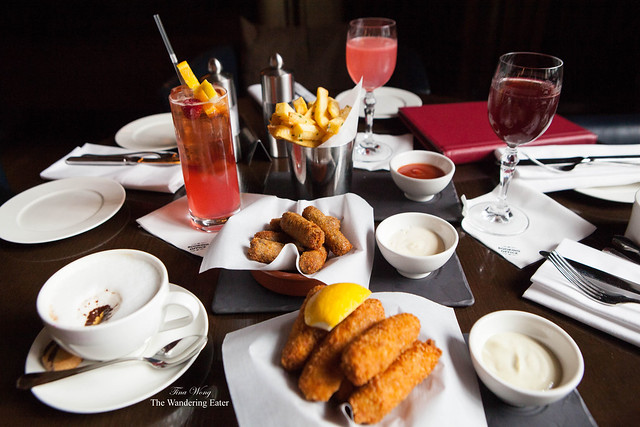 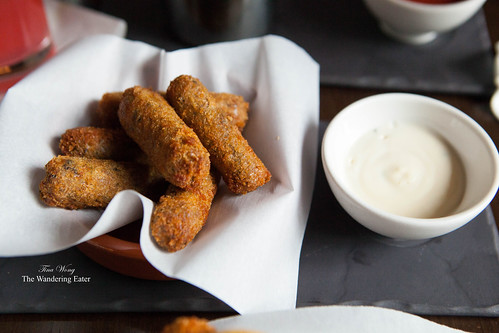 Some of their bar snacks like salmon croquettes (£8.00), haggis bonbons served with pickled lemon mayonnaise (£7.00), and truffle chips (£7.00) were great with these drinks. My favorite of the three were surprisingly, the haggis bonbons.

Haggis is a traditional Scottish savory pudding that’s made of minced heart, liver and lungs, onion, oatmeal, suet, spices, and salt. (It tends to have deep divisions of people who either like it or hate it.) The kitchen crew of Booking Office takes the haggis, coats it in seasoned fine breadcrumbs and deep fries this offal pudding to make this a better and much more appealing dish.

St Pancras Renaissance Hotel is truly a luxurious hotel that has history and stood the test of time. The rooms and suites are beautiful and has a nice mixture of Victorian meets contemporary. The dining areas like Booking Office would satisfy your need of a very well made drink or a quick bite to eat.