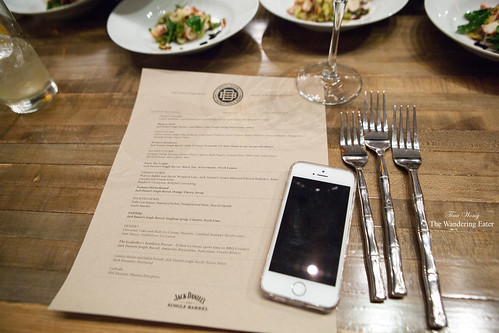 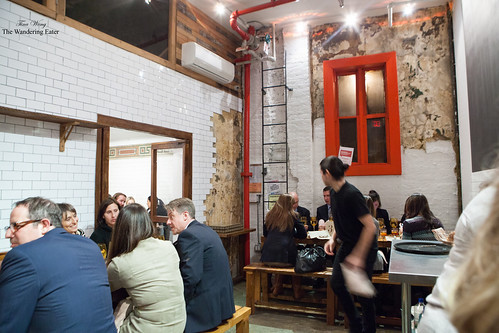 Last night I attended the kickoff of Jack Daniel’s Single Barrel: Bounty & Barrel Dinner in Openhouse in the Nolita section of New York City. This is one of the five-city tour that features local chefs who cook with the tasty Jack Daniel Single Barrel Tennessee whiskey (and cocktails made with this fine spirit) for an intimate dinner that is also a fundraiser benefiting Share Our Strength‘s “No Kid Hungry Campaign.”

Since I arrived a bit late for the canapes due to work, I settled for a refreshing and citrus-y Bluegrass Shrub (seen on the top of this post) made with Jack Daniel’s Single Barrel Whiskey. Eventually, when dinner service was about to commence, we walked to the back of this austere, rustic with partially exposed brick walls, pop-up restaurant and seated at our own assigned table. Mine was fortuitously at the counter bar to watch and interact with the chefs who were cooking for us tonight. 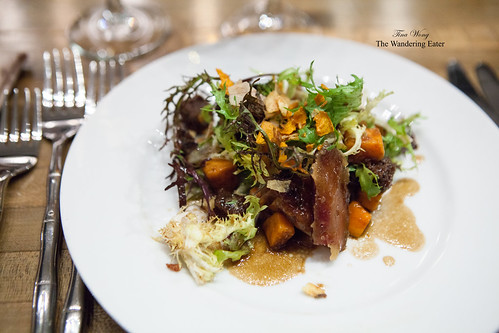 Chef Frietag composed this insanely delicious frisée lettuce salad mixed with slivers of candied maple bacon, cubes of sweet potatoes and caramelized onions and tossed with a warm whiskey-honey balsamic vinaigrette. Like my neighbor sitting next to me said, “Amanda, you can make me salad any time.” It’s a wonderfully balanced mixture of sweet, salty, and bitter. Of course, with bacon in a healthy salad makes it so much tastier.

This salad was paired with the Northern Manhattan, mixed with Jack Daniel’s Single Barrel, Creole bitters, cider vinegar syrup, fresh lemon, and seltzer. This cocktail was delicious and I love a good Manhattan. This cocktail wasn’t brooding; it’s sweet and tart enough to balance this potent drink. 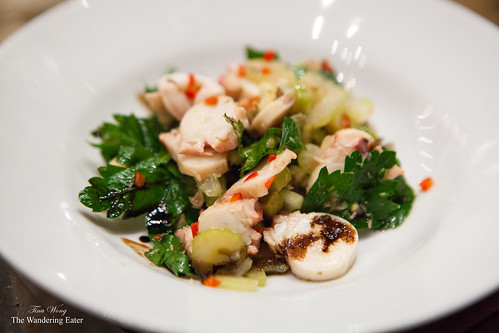 Chef McFarlane made a briny octopus salad to prime our palates for the meat courses. Admittedly, the salad composition was a bit uneven on various seen plates passed out. Some had more chopped celery while others looked more balanced with leaves of parsley. Otherwise, a good seafood salad.

The cocktail pairing called the Sweet Tea Frappe is a sweet, fruity cocktail made of Jack Daniel’s Single Barrel, black tea, St. Germain liqueur, and fresh lemon. You can sum it up as a boozed up, fruity, Southern sweet tea. 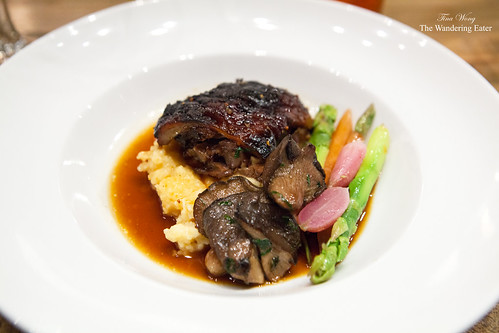 Chef Thompson cooked up some tender braised duck breast served with Jack Daniel’s grain mustard glazed radishes, baby carrots on a bed of creamy Gouda grits. It’s hearty and delicious and it doesn’t weigh us down.

The duck was paired with the Truman’s Old Fashioned, made of Jack Daniel’s Single Barrel, orange, and cherry syrup. A fitting drink since the duck has so much deep, rich flavors. 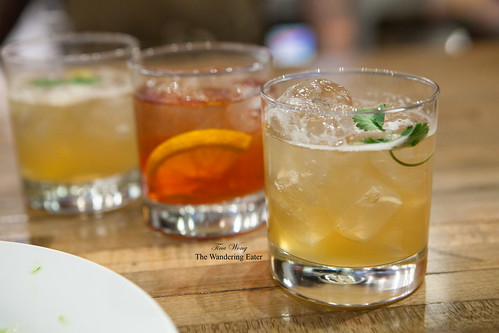 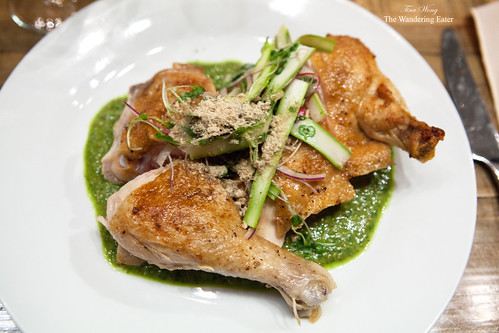 Chef Sanchez (or “El Jefe”, the boss, as he put on this chef’s jacket), served us “Pollo con pepian.” It’s roasted chicken thighs on a refreshing, pastel green pumpkin seed mole and shaved asparagus. This chicken dish was very good, especially the mole sauce made a world of a difference.

The cocktail pairing was the Gulf Julep is made of Jack Daniel’s Single Barrel, sorghum syrup, cilantro, and fresh lime. It’s light and refreshing as the chicken. 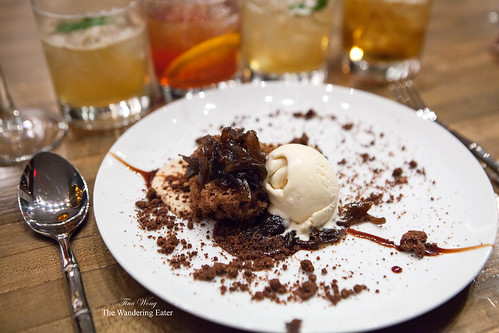 I was most excited about dessert since I love Sam Mason’s experimental but insanely good desserts. I admit I loved his creations back when he had his innovative restaurant, Tailor, back in 2008 (prior to that he worked with Wylie Dufresne at wd~50 as his pastry chef) and was heartbroken when it closed down about two years later.

Mason made us chocolate cake (that was microwaved to give it that crater-like texture), peanuts, chocolate crumbs, chunks of candied maitake mushrooms, stripe of chocolate syrup, and a scoop of malt ice cream. This reminded me of his genius and in my mind, the few iconoclasts in the dessert realm that I highly respect.

The dessert is not that sweet at all. The cake itself is sweet enough that you’d register it’s a fluffy, spongy chocolate cake. The soft candied maitake mushrooms that were simmered in sugar syrup for 14 hours was sort of sweet but has a minute crunch-like texture and the malt ice cream delivered on the creaminess without adding much sugar either. Good grief, I love this and I was internally crying how good this was.

The cocktail pairing with this dessert was The Godfather’s Southern Paesan was made of Jack Daniel’s Single Barrel, Amaretto Disaronno, Falernum, and Creole bitters. I didn’t care so much about this drink frankly, since there’s so much bitter components that doesn’t work well with this excellent dessert. 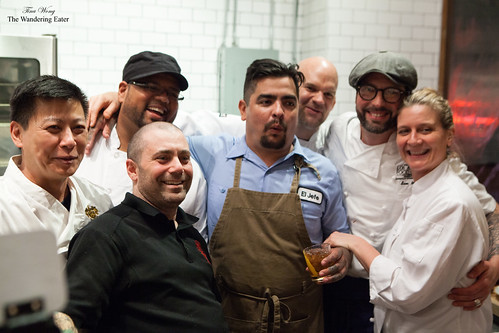 Group photo of the chefs

The night ended with lots of convivial buzz since we had so many solid cocktails, the food was great, and the chefs were such a fun group (the funny jokes and smack talk amongst each other) and were open to questions from diners.

To view more photos of this visit, please view the gallery below (or CLICK HERE):