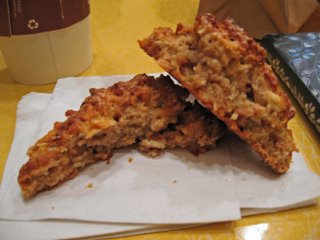 For the morning, I went to Amy’s Bread in West Village located on Bleecker & Leroy St. The only thing that appeals to me at the moment was the oat scone ($2.50). It’s crunchy on the outside, chewy and soft in the inside. It contained a ton of oats, raisins (both golden and regular), possibly chopped dates, and chopped walnuts. All of those fruits and nuts have a great combination of flavors: the walnuts and oats gives it a nice nutty flavor since both gets toasted while it bakes, and the walnuts gives it a subtle bitterness. The dried fruits gives it a sweet and chewy contrast to the crunchy, nutty flavor. It’s wonderful; I want to bake a scone like this. 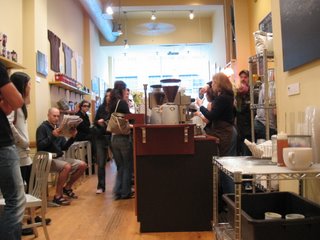 The next stop is Joe’s coffee, yes again but this time it’s around Union Square off 5th Ave & E 13th St. As you can see, it’s packed with people for the morning rush (it was taken around 9 AM). It’s insanely crazy for how Manhattanites and local college kids (like myself) depend on caffeine to keep the pace of life that is greatly celeric: it seems like everyone has so little time to do everything and it’s very hectic.

The place itself has a casual, upbeat vibe. During the off hours of the morning rush, it’s a very calm place where anyone can hangout and chat or read the day’s paper. As for the coffee, their house, the Vienna Roast is soo good. It’s strong, bold and smooth. My type of coffee and it’s my favorite, hence me being a follower for over 5 years of Joe’s. When it comes to their espresso and espresso drinks, these days I’m finding it a hit-or-miss. Sometimes I can get a great espresso or there are days when I feel it’s a bit bland or diluted; back then it used to be spot on. Probably they need to retrain the new baristas again.

It’s about 4:30 when I met my friend, Kim for dinner before the Carnegie concert. We ended up deciding to go to Cafe Europa, located at 255 W 57th St., for the main entrée, since we both didn’t want to eat a huge meal. We ended up splitting a Sloppy Joe Pressata ($6.25, $6.77 w/tax). It’s a cross between a panini and a quesadilla actually, I think it’s more of a quesadilla than a panini.

It tastes like a sloppy joe with a Tex-Mex twist. It contains (possibly cheddar), chopped bell peppers, and onions. has a lot of ground beef, some cheese. It tasted like there’s salsa and a bit too salty. Also as Kim pointed out, there’s a “weird aftertaste.” As I tasted it again and paid attention to it, it had a warm, spicy, somewhat smoky flavor that lingers on the tongue. My analysis: too much cumin. Really, it just stays on your tongue for a while. Not my absolute favorite sandwich, panini, what have you but it’s not bad either. If I rate it from a scale from 1-10, I give it a 6.

For dessert, we went up a block to 7th Ave & 58th St to Le Pain Quotidien. I wanted to go to this place because it’s one of the recommendations from my favorite food forum, Chowhound.com, suggested to me when I asked, “where can I find the best brownie?” So, when entering this bakery/café, they had a beautiful display of pastries and it just makes us both salivating for them. But the most appealing was the Belgian Brownie and we bought that for $3 (no tax) to take out. The setting to eat our brownie was in Central Park. It’s been a while since both of us has been here (about 3-5 months) so, it’s a nice change of setting. Hence the greenery in the photo. 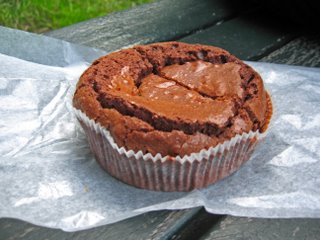 It looks so delicious! Actually, it looks like a chocolate souffle from the fallen, crackly crust on top. The interior looks moist, dense and fudge; my type of brownie! It smelled of good dark chocolate. The taste: it wasn’t very sweet (a very good thing when you eat a dessert), chocolatey, a slight hint of almond flavor. It’s one of the best brownies I have eaten in NYC. Then, it’s concert time at Carnegie Hall.