The past Tuesday, 9/19, I ventured out to Chinatown. The heartland of all things cheap in Manhattan and have real Chinese food; not those Americanized food like sesame chicken. Of course, some restaurants cater to the tourists of the city and do carry the Americanized foods but that’s not what I seek in Chinatown. The place of choice I went to is the Chatham Restaurant on 9 Chatham Square. This place is basically a dim sum place but more “rustic.” Not exactly, as you will see from the photo, a fancy restaurant. 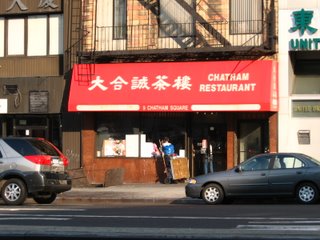 This place is pretty well known in my family, since my dad recalled to his teenage years (during the late 1960s, early 70s) eating their baked roast pork buns. About ten years ago, he finally took the entire family there and actually bought the well fabled buns. It was wonderful. I wasn’t too aware of what was in it because I wasn’t a “foodie” (meaning, I didn’t care what or how it’s made) yet but all I remembered was that it was pretty damn good.

Back to the recent days. Well, I went there on my own and actually spoke Cantonese (most of my friends deny the fact that I had some knowledge of it), ordering a dai bao (literally translated, big bun) and the baked roast pork bun. The total cost was $1.70; the potk bun is 60 cents, the “big bun” is $1.10. Trust me, even though I didn’t order many items, it will fill you up if you’re not a big eater. Also, it’s a lot cheaper than spending $6 and up, plus tax for a sandwich from Whole Foods or the local deli. 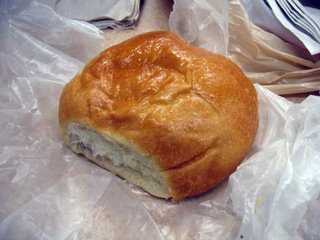 The roast pork bun really has no comparison to any pork bun in NYC. The glossy, golden brown exterior is soft, sweet and a slight hint of a yeasty flavor that one would find in fresh bread. The inside contains a ton of chopped, lean roast pork meat, chopped onions and the right amount of sauce. It has a salty, peppery taste from the sauce. Very good – I know why I loved this thing. It kicks the Flushing version’s ass – practically no pork at all, just pork fat, onions, and bland gelatinous sauce. 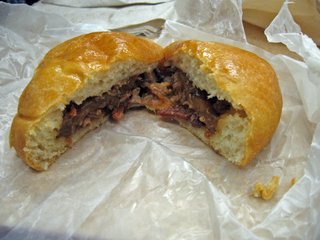 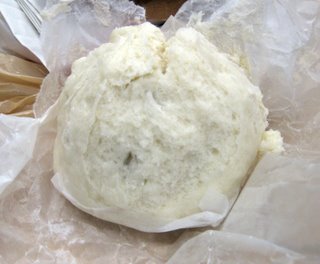 Dai Bao: It’s called that because it is a big bun. It’s a steamed bun filled with a ton of ground pork, hard boiled egg, shrimp, chicken, and sometimes shitake mushrooms. Basically, it’s a bun that’s filled with the “kitchen sink” worth of meats or protein. You will not see or find any vegetables at all. This is a bun for a carnivore. There’s no such thing as a “big bun” for vegetarians, unless it’s Americanized. Anyways, it’s really filling and hearty from all that protein and it’s the traditional version of the bun.

I shared both of these buns amongst my lunch companions, Helen and Seungmi. When I asked them which they prefer, I got mixed reactions. Helen loved the hearty meatiness of the “big bun” while Seungmi enjoyed the wonderful flavors of the pork bun. Personally, I loved the pork bun more because of the flavors and textures and the fact that I ate this since I was a kid. The “big bun” is just meant for sustenance for me.