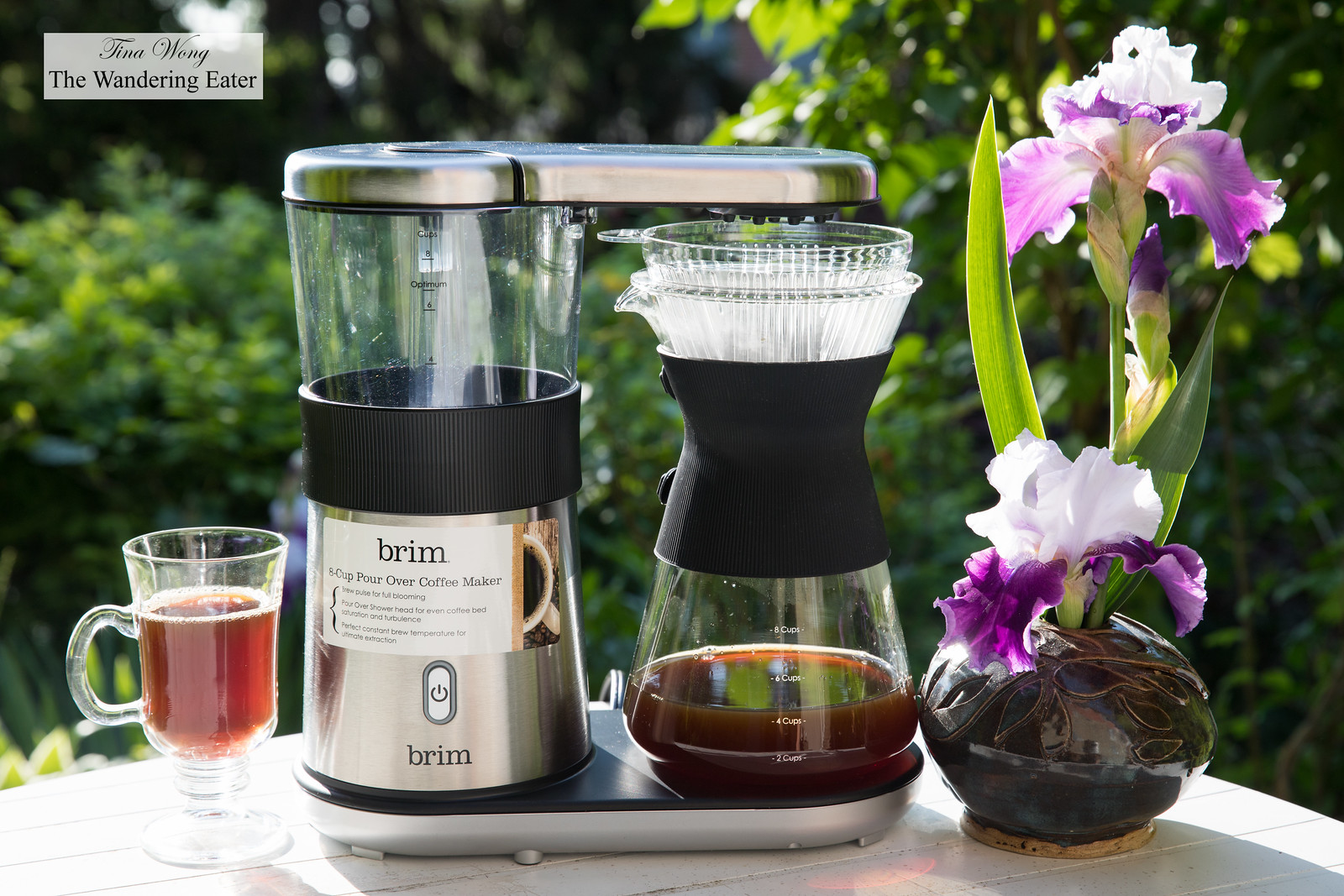 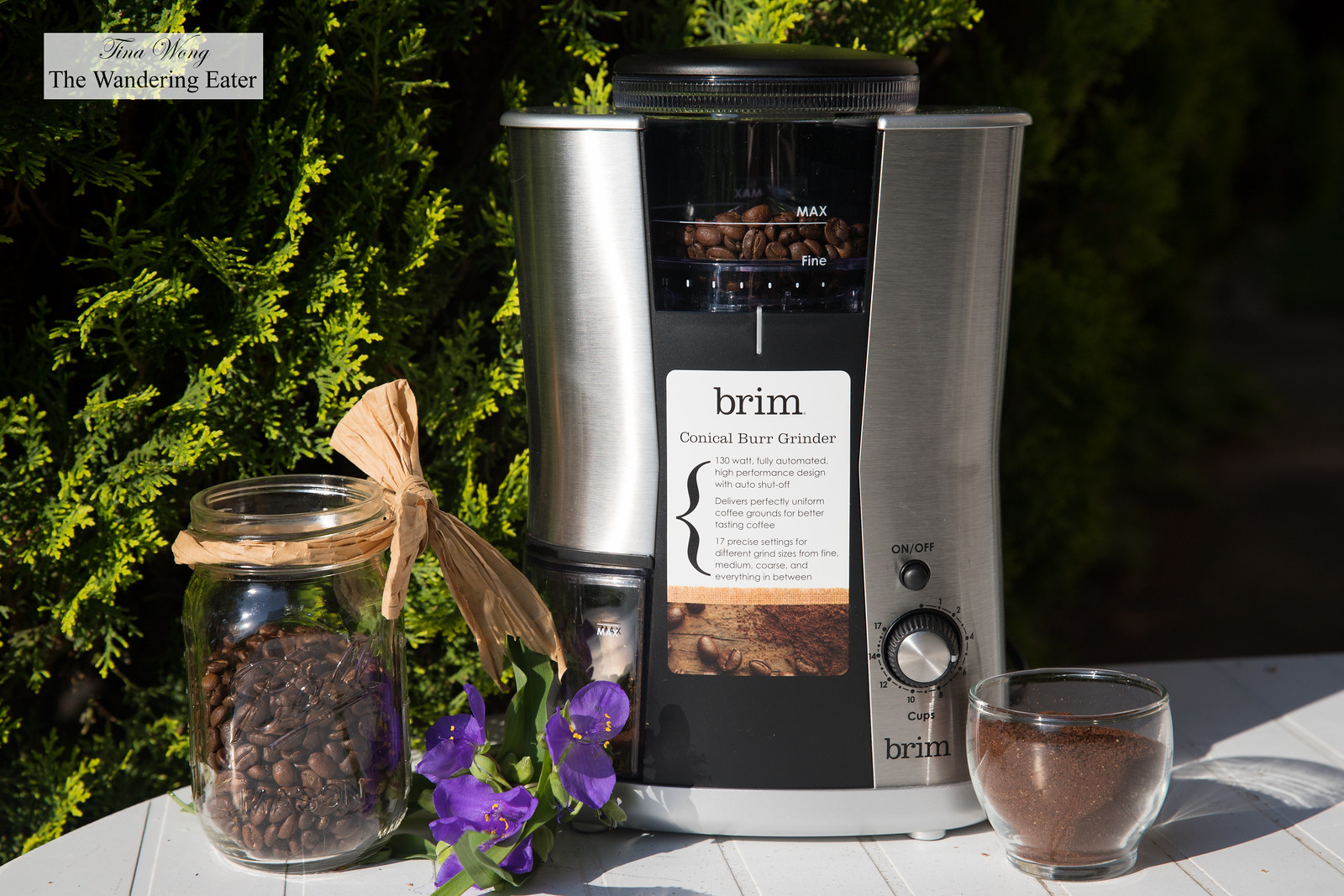 Brim Coffee originated in the early 1960s as a canned, strictly decaf coffee product made by General Foods. The original products disappeared from shelves in the mid-1990s amid corporate reshuffling. Ownership of the brand has changed hands more than once since then, eventually leading to an acquisition by Sensio in 2014. To help lead the brand into the current craft coffee landscape, Sensio has also brought on board resident expert and brand ambassador Blair Smith, a barista for California-based coffee company Augie’s Coffee Roasters and a U.S. Brewers Cup finalist and judge.

Brim’s automatic 8-Cup Pour Over Coffee Maker opting for the pourover-style of delivering water onto coffee in a filter held by the carafe, as opposed to a basket-holder on the machine itself. The hourglass-shaped glass carafe is included and comes with both a laser-etched reusable filter or optional paper filters for “cleaner, sweeter” cups.

The machine also offers “brew pulse” technology that pauses the water for blooming, features a 1500-watt heating element capable of maintaining water temps in the SCA-recommended range of 197-204 degrees F.

The Brim Conical Burr Grinder offers 17 gradations of fineness and a timer knob demarcated by dosage in desired numbers of cups, rather than seconds. It is a very useful machine for the coffee obsessive to have fresh ground coffee instead of hand cranking the manual coffee grinders. (The latter is useful but tedious when grinding away first thing in the morning.) 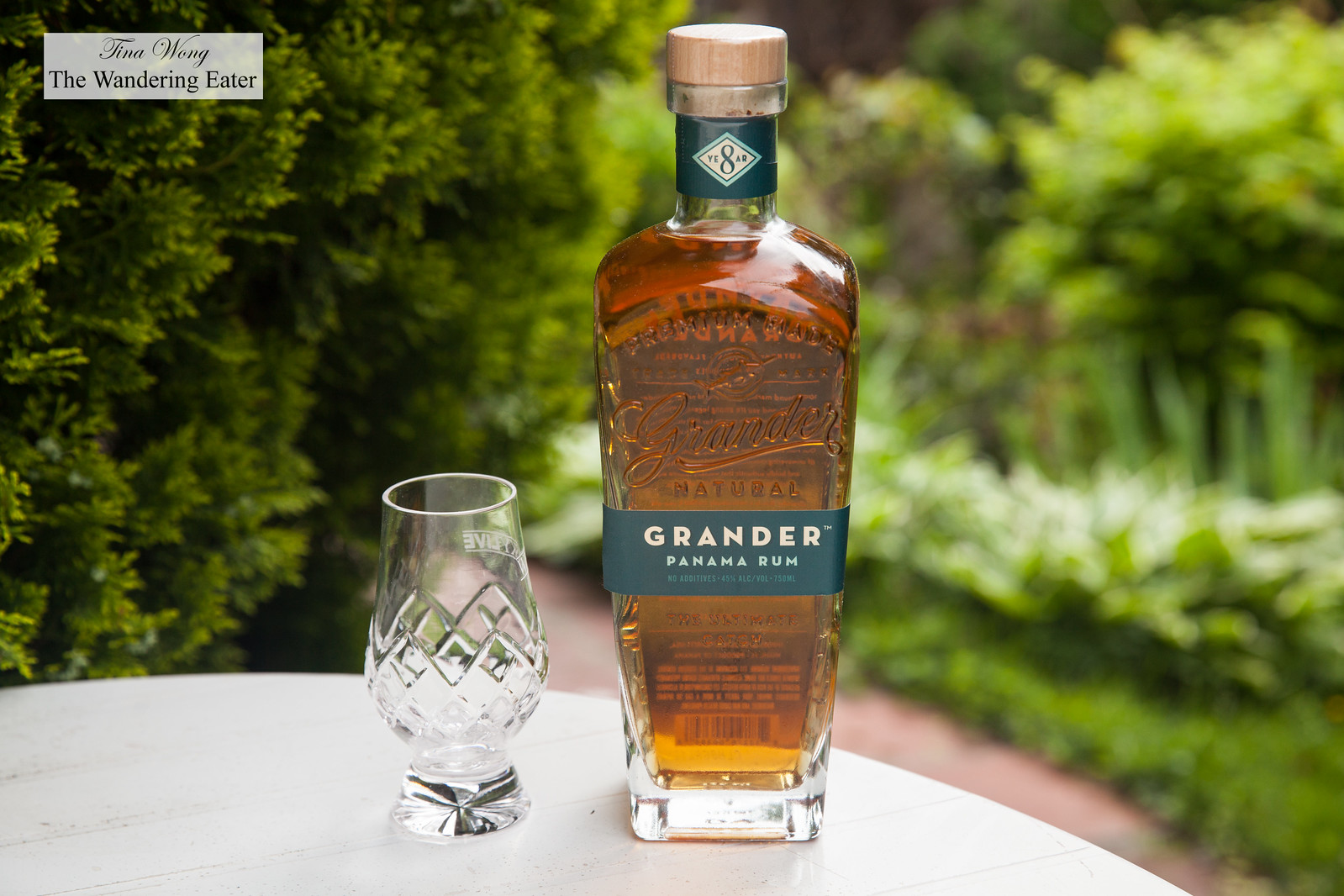 Grander Rum is an independently owned spirits brand that’s producing an eight year old Panamanian rum. The process begins in the sugar cane fields of Herrara, Panama, where the sugar cane is hand-harvested and turned into Grade-A molasses. After fermentation, that molasses is distilled at Ingenio San Carlos Distillery in copper plated column stills. It’s then aged for eight years in barrels that once held Kentucky bourbon. It’s completely unadulterated–just rum in a barrel–before being cut with water to a formidable 90 proof.

Grander Rum pours a rich amber in the glass, and on the nose there’s vanilla, spices and plenty of bourbon-heavy oak. The liquid is rich and oily on the palate, with flavors ranging from more of those vanilla and spice notes (nutmeg, cinnamon), plus dried fruits. Toward the finish things turn decidedly more dry, as the mouthfeel takes on a lip-smacking quality that’s full of warm oak and just a hint of cane sugar and bourbon sweetness. 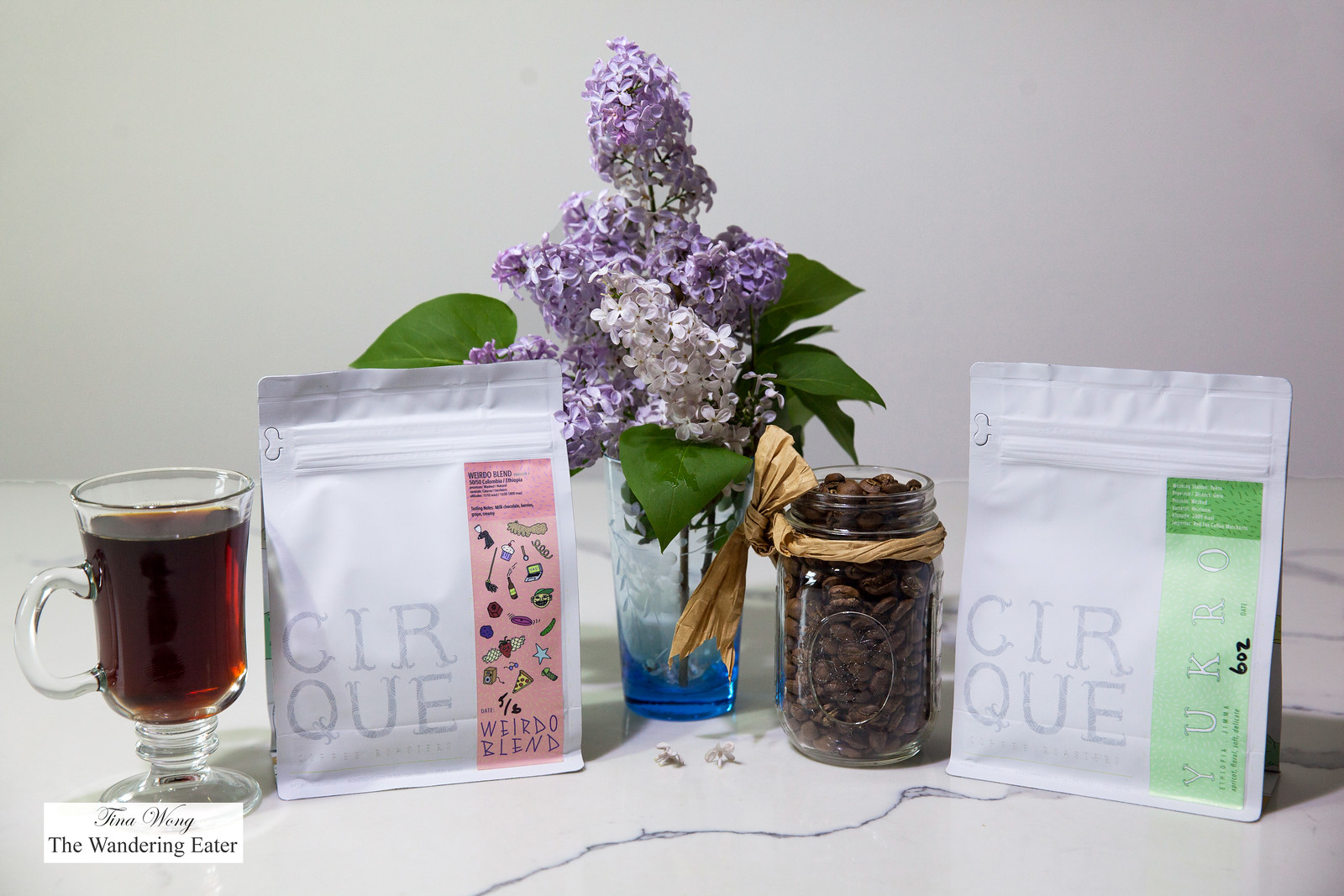 Cirque Coffee Roasters is an independent roaster out in Tulsa, Oklahoma. I am sure not many would have thought of a very good coffee roaster would exist out in the Great Plains but this funky roaster does roast some interesting coffee beans that makes your palate wake up and pay attention to the complexity and unusually good flavors from these beans. The Yukro is washed Ethiopian coffee beans that is bright and crisp but with incredible notes of oolong tea coming through. The Weirdo blend coffee is their house blend that varies by season. It generally achieves a creamy mouthfeel with flavors of milk chocolate and lush berries. 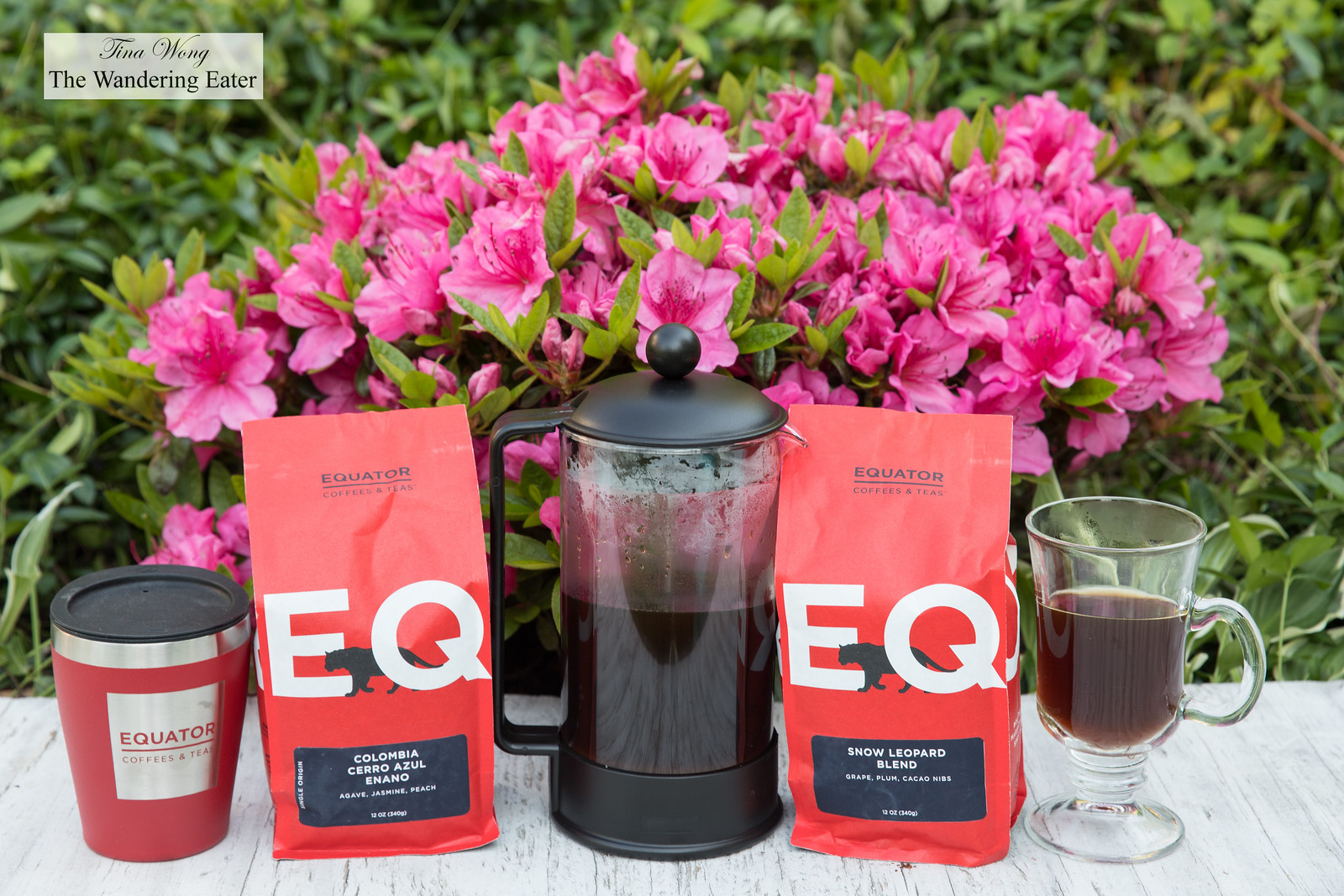 Equator Coffee is one of the popular coffee roasters within the United States. If you ever dined at any Thomas Keller restaurants and/or Bouchon Bakery, you have tried Equator’s coffee (except its own respective blends). The two blends that we’ve tasted recently are the Snow Leopard Blend and Colombia Cerro Azul Enano beans. The Snow Leopard is a seasonal blend that takes single origin coffees and changes them into something unexpected. The coffee is from the Mzuzu Cooperative in northern Malawi. This coffee contributes a vibrant acidity that helps to bring out the fruit flavors of the blend’s other components. The overall taste is complex with flavors of orange, grape, plum, cedar, and cacao nibs.

The Cerro Azul Enano is an ongoing exclusive offering at Equator from Cerro Azul, a coffee farm owned and operated by Granja La Esperanza. The farm was planted exclusively to the rare and celebrated botanical variety known as Gesha (or Geisha), or so they thought. As the coffee trees began to mature, it became evident that a small number of trees did not look like Gesha. The compact size of the trees and the dense foliage were distinctly different than the taller, comparatively sparse Gesha bushes. No one is sure what the true identity of this dwarf variety is. As such, the plants were dubbed Enano, which means dwarf in Spanish. It has notes of agave and peach nectar, and jasmine.