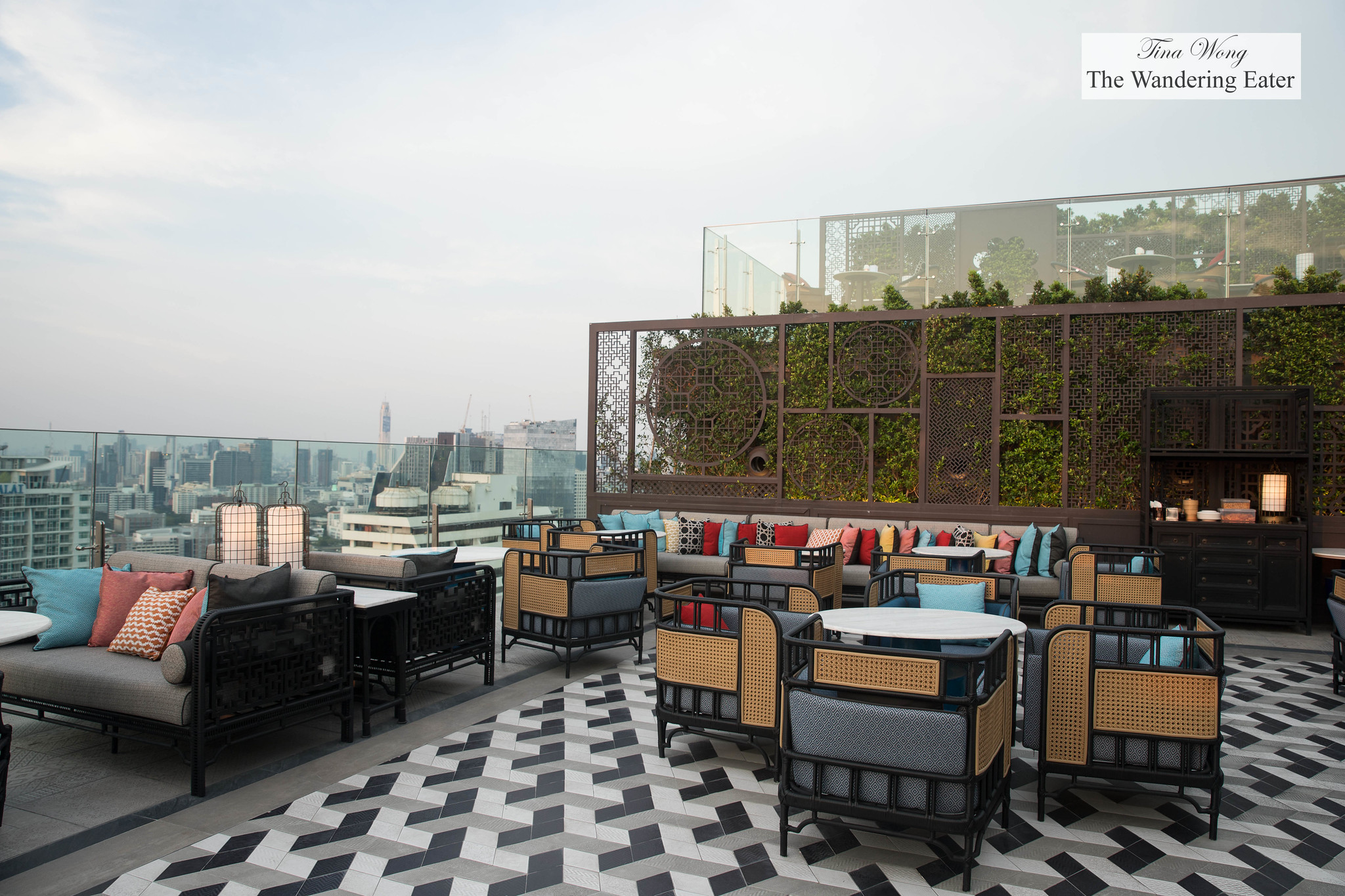 If you are looking for a place that has phenomenal 360-degree views you should head to Bangkok Marriott Hotel The Surawongse rooftop at Yao Rooftop Bar, which I will get to later on this post. This fairly new hotel (it opened Spring 2018) is situated on Surawong Road, Bangkok’s bustling thoroughfare that runs from the Chao Phraya River to Rama IV Road, Bangkok Marriott Hotel The Surawongse is surrounded by cultural attractions including Neilson Hays Library and Sri Maha Mariamman Temple. This property is the perfect jumping-off spot for travelers looking to explore Bangkok’s past and contemporary art scene.

Besides the views, there’s also very delicious food served at Praya Kitchen. Granted it is a buffet-type restaurant, it has a wide selection of Thai street food and international dishes, the dinner buffet features a special live-seafood wall, where diners can pick fresh, seafood such as large local river prawns and lobster.

How the cooking and choosing is done, you pick up a small color coded pot (e.g. red = stir-fried with black pepper sauce, orange = fried with garlic sauce and yellow/green = fried with curry sauce) and choose the seafood of choice, walk it up to the cooking station and attach your mini clothespin with your table number on it and the staff will cook and bring your plate over.

Of course, we paid a lot of attention to the seafood part of this buffet since the restaurant serves some locally caught crustaceans like the river prawns and lobster, mussels and other seafood. Of the many varied seafood and sauces that we paired and ate, the garlic sauce was the general favorite and the black pepper sauce next. The favorite seafood were the local river prawns that have the bulbous head that had so much juice to suck its head when it is shelled with my fingers and it’s incredibly meaty.

What really stunned us was the excellent noodle dishes that were cooked à la minute. The two dishes I am talking about are the Pad Thai and the noodles in soup. The Pad Thai was cooked wonderfully especially how the female cook deftly toss the wok in the flames giving the lively, smoky wok hay flavor to the dish.

The same cook also handles the noodles in soup too. She cooks the noodles in a large pot seafood stock since she parboils for a minute or two the various mussels, clams and other seafood for the station that is doing the stir fry or frying of the seafood in the color coded pots. The fresh thin, springy bright green thin egg noodles that transported me to Hong Kong for a moment. The noodles’ texture reminds me of wonton noodles. The vegetables and fish balls I chose to have in my bowl of noodles were cooked nicely and the bowl topped with the seafood broth made it so much more delicious than I ever anticipated. This was my favorite bowl of noodles in soup for this entire trip in Bangkok.

We did stop by the separate room that shares the juice bar (it has a great assortment of fruit flavored waters, fresh fruit juices, Thai milk tea, etc.) and desserts that covers both Western style and Thai. The Thai desserts are so unique to me since there are no such places in the United States, even in New York, that sells and serves these types of desserts. When I ate through most of them, I have realized most are based in a lightly sweetened bean paste or a slightly chewy rice flour based sweets. All were so tasty and dainty that I don’t feel so bad to have about six of them. And of course, the mango pudding was phenomenal. (Mango is king in Thailand especially when it’s in season since they grow it here.)

Yào Restaurant & Rooftop Bar is perched on the 32nd floor. It serves a snack menu featuring Chinese nibbles to pair with Chinese inspired signature cocktails and most of those drinks contain a Chinese spirit or Asian flavors infused. The cocktails we ordered (Shanghai, The City “Upon the Sea”, Chinese Highball, and Shanghainese Fashion) were overall on the light and refreshing side. The one closest to my strong drink preference was the Shanghainese Fashion made of Evan Williams Bourbon, cocktail bitters, Maotai (sprayed as essence), and Chinese five spice syrup.

We did check out the rooftop bar before we had dinner and goodness, it’s a wonder to look out from. At night, it is still very pretty to look out the city. It’s a great place to hang out on a very warm night, clear night.