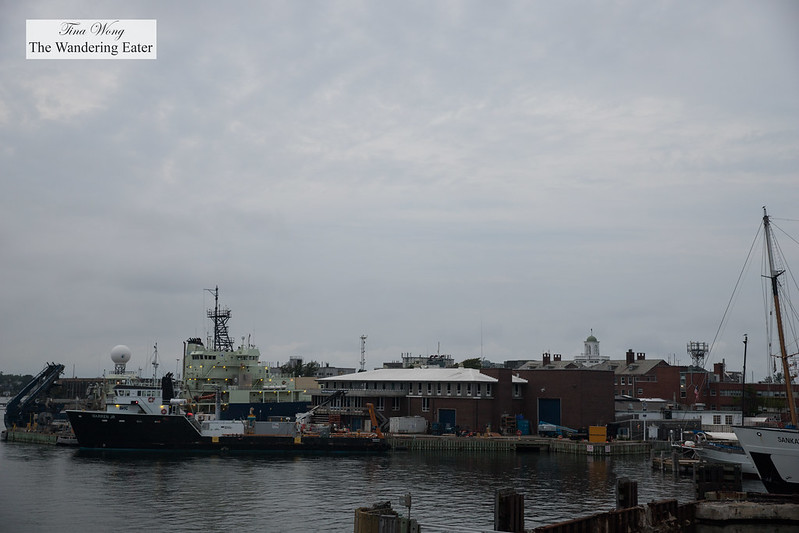 I recently went to Martha’s Vineyard (MVY) for a weekend getaway with a friend — and what a getaway that was. The journey to the island was admittedly much more arduous than what we have anticipated. Originally we have booked flights directly from JFK to the island but for both ways, it’s been either extensively delayed (for the first leg) and canceled on the way home. Like I’ve overheard from one of the locals say on my van taxi ride to the ferry terminal at Oaks Bluff from MVY airport, it’s a lovely island because it’s relatively remote and you’re away from the large crowds — and it’s hard to get out. We tried to make the best of these circumstances and thankfully there was Uber (about 6.5-hour drive from NYC to Falmouth, MA) and the ferries to and from Falmouth, MA to Martha’s Vineyard. Sure, it’s not as fast as an hour-long plane ride but it beats waiting in an airport or being stranded in one overnight. 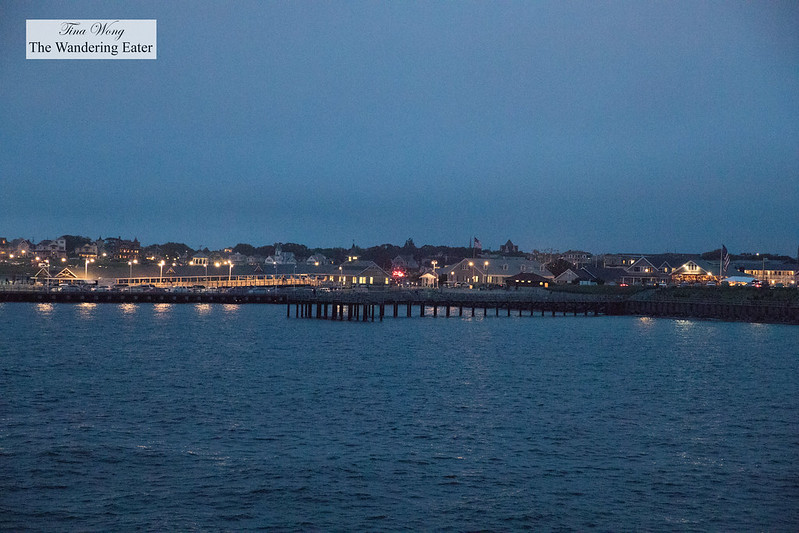 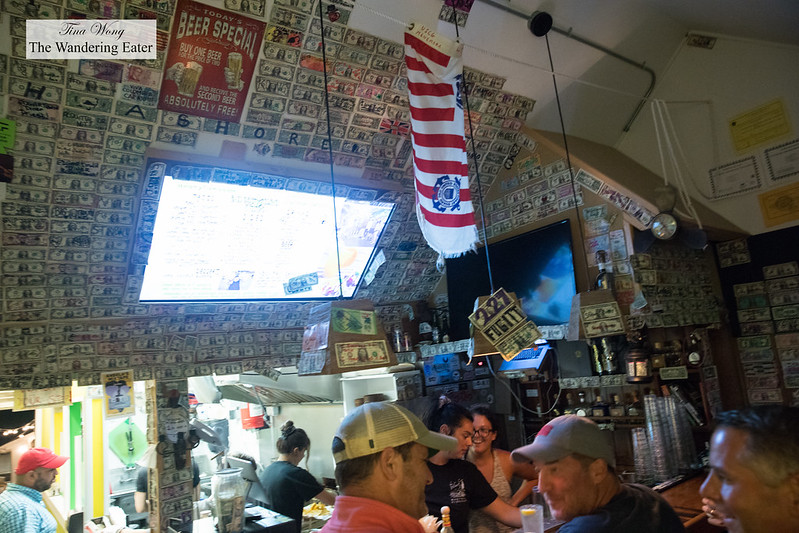 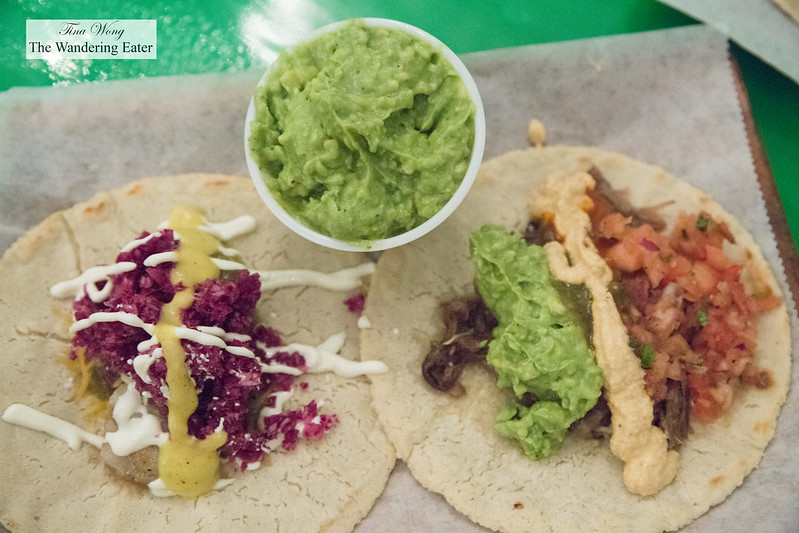 We made it to MVY by dusk and seen the lovely piers by Oaks Bluff at night. We made our way by the local cab company to drop off our luggage to our hotel Harborside Inn in Edgartown, about twenty-five minutes away. It was an interesting ride since there’s only a one lane two-way street and there are no street lights so it’s almost pitch black if you were to bike or walk in between towns. It took me back to the time I was in USVI (US Virgin Islands) where I remembered my group’s driver was driving a Jeep through the pitch dark rain forest on a narrow road. Unnerving and exhilarating all at once.

Dropping our bags and hungry since we each had a plate of a grilled chicken salad from a salad bar at Alaska Air’s lounge at JFK, we walked around Main Street to see what is opened. Not terribly surprising, we found out that most restaurants close their kitchens at 10:00 PM on a Saturday. A few places that were still open only to serve drinks and have live bands performing. My friend asked one of the hosts of a restaurant what is open and we were told, there is a taco place called Backyard Taco on Winter Street about five minutes away walking. Making our way up its porch with couples sitting about casually, we opened the screened door to find a small crowded bar of imbibers happy to see new faces. The first thing I’ve noticed besides the crowd were the signed dollar bills posted up on the walls and ceiling of this relative hole in the wall establishment. We ordered from their menu, which is generally nontraditional in terms of what you’d see or get in Mexico. What I liked about this place is the fact they made their own tortillas (though on the thicker side), it’s made to order, and it tasted good despite the addition of cheese sauce. Also the atmosphere is relaxed and fun. Felt like I’m in a friend’s laid back backyard party, especially with the table behind me having a round of tequila shots. 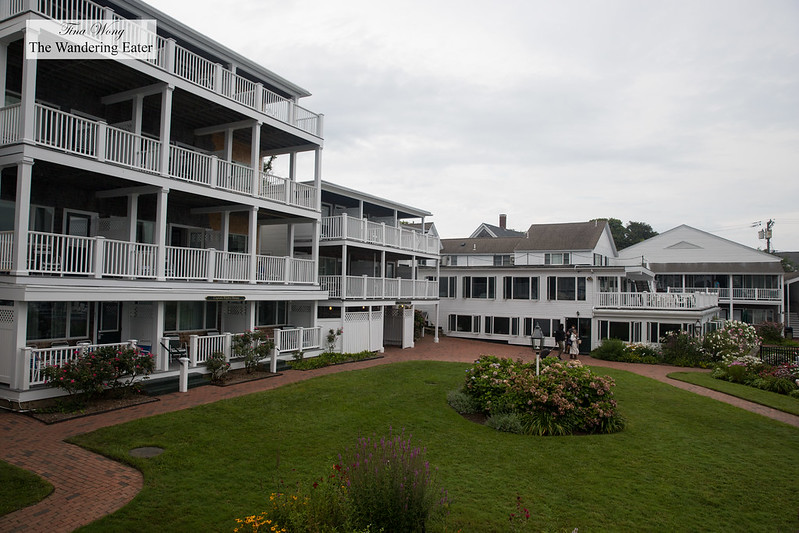 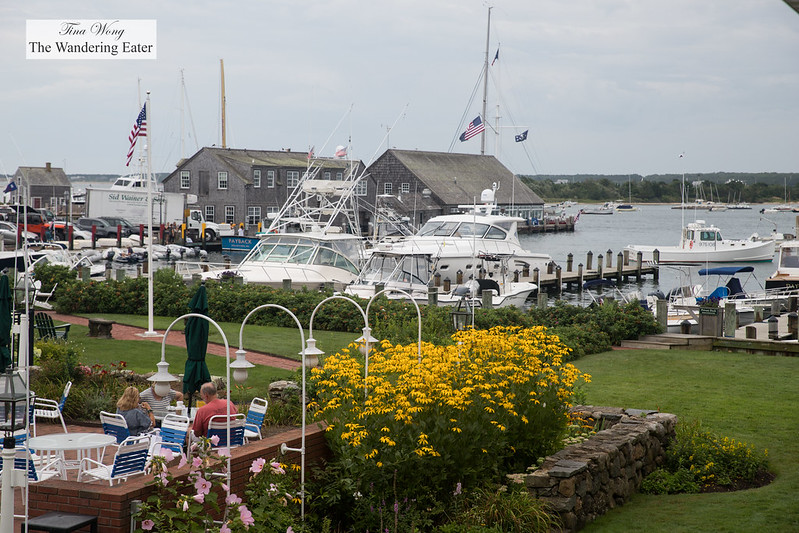 Waking up in the morning to see the charming inn with its coastal style and a view of a pier from the balcony, it’s nice not to have a true agenda to do anything since it’s not like I’m visiting a metropolitan city where I need to visit fifty places. Just standing out there with a cup of coffee and taking in the calm scenery does relax me from the hectic pace of New York. 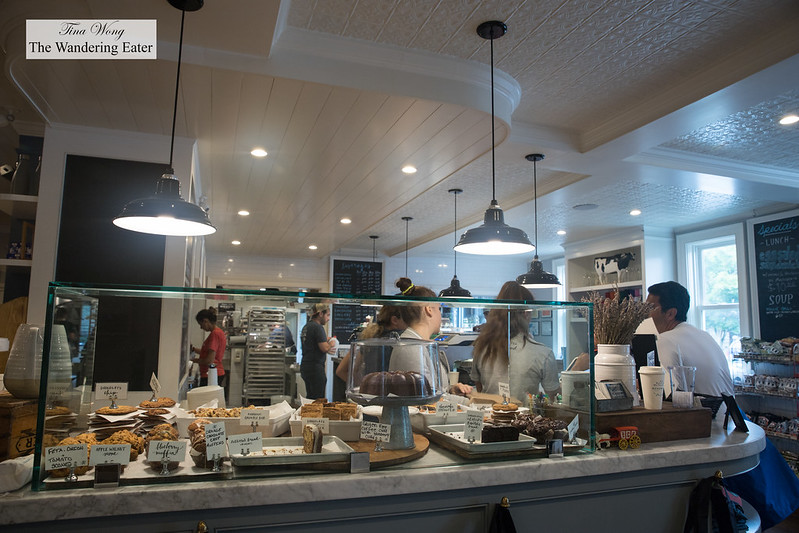 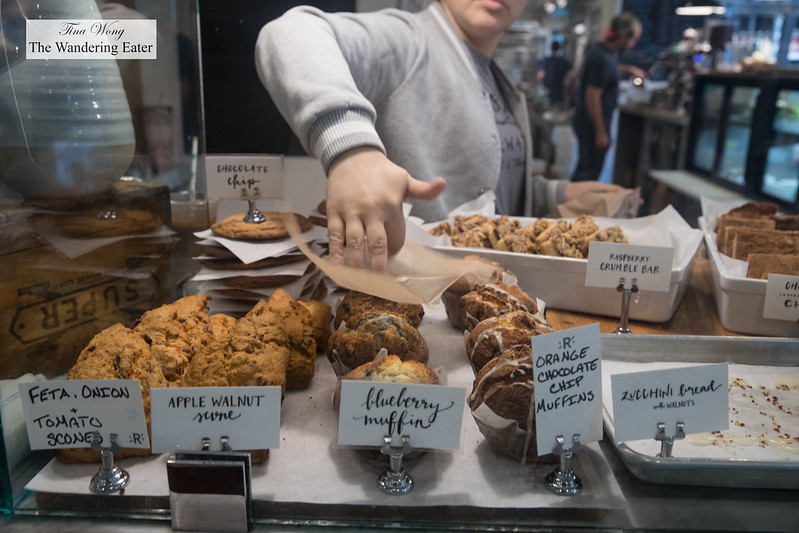 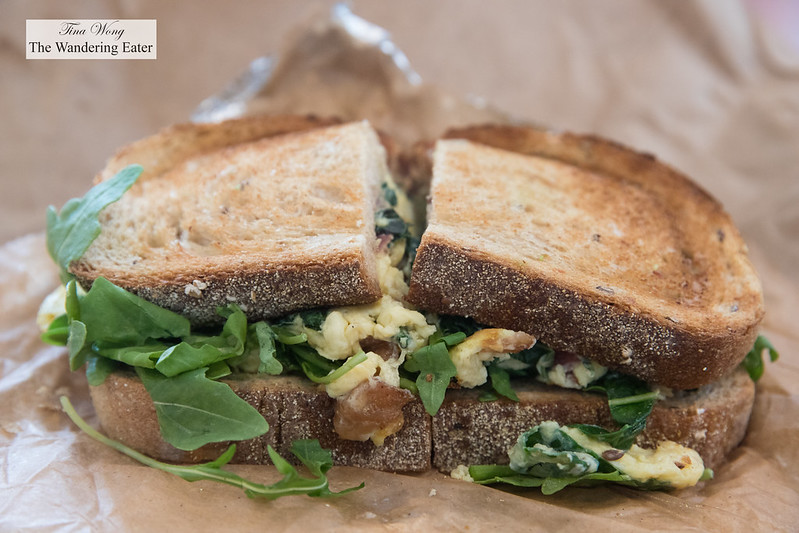 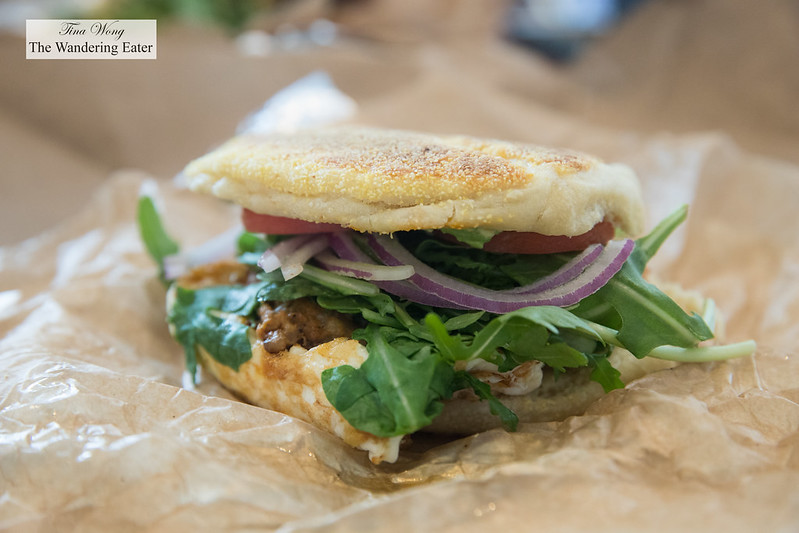 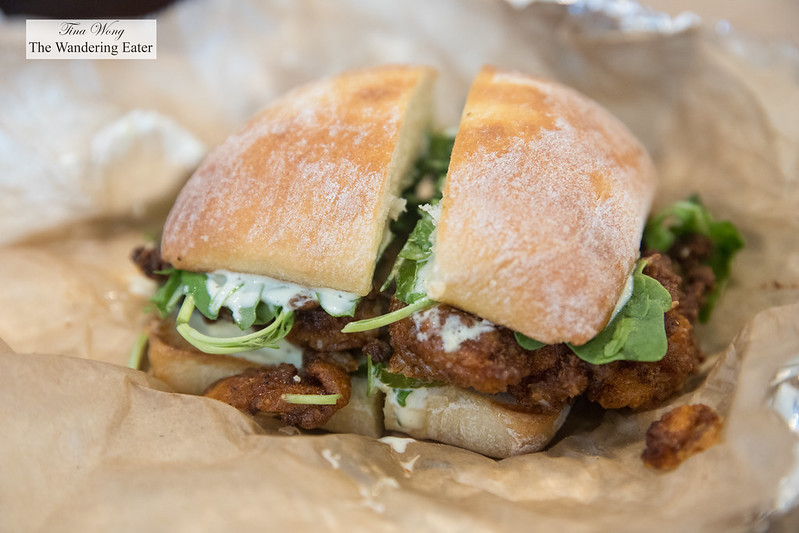 A consistent place we’ve kept coming back to for the two days were were in MVY, was Rosewater Market & Takeaway. It’s a very good, upscale cafe and delicatessen where a few locals, visitors and young families come here for a solid cups of coffee or espresso (they even serve matcha lattes, by the way) and have excellent made-to-order sandwiches. The Green Egg sandwich and egg and linguiça sausage on English muffin were satisfying breakfast sandwiches. The lunch sandwiches like the buttermilk fried chicken breast was great too. I wish they did sell the chicken without the ciabatta bread so it won’t hinder the texture as much. 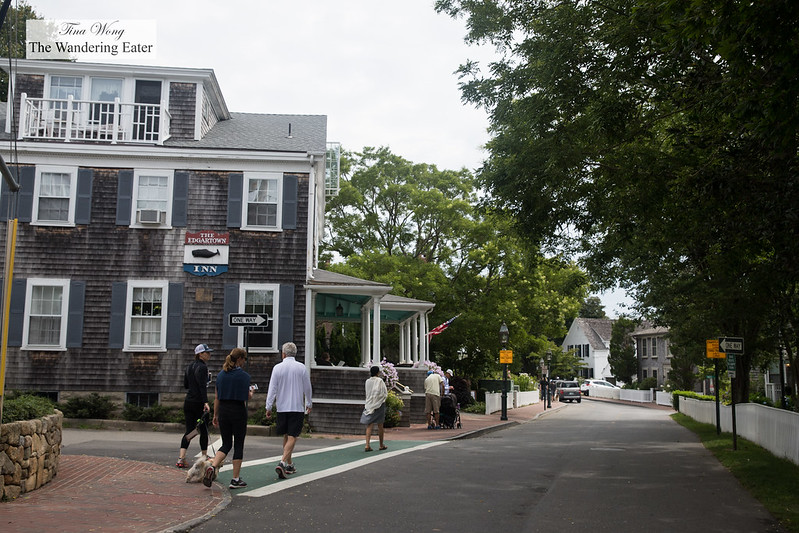 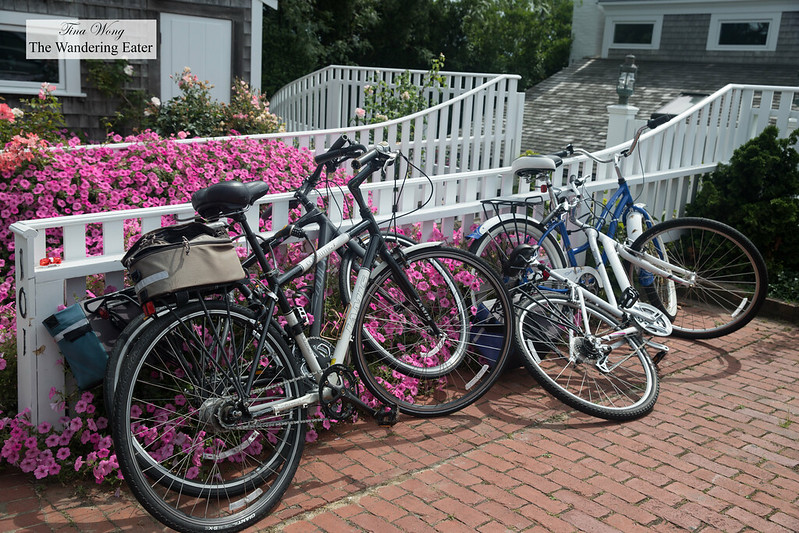 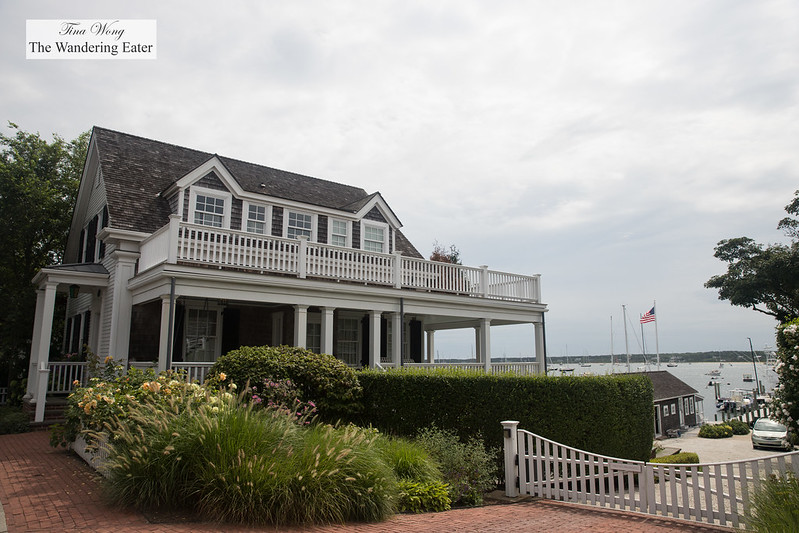 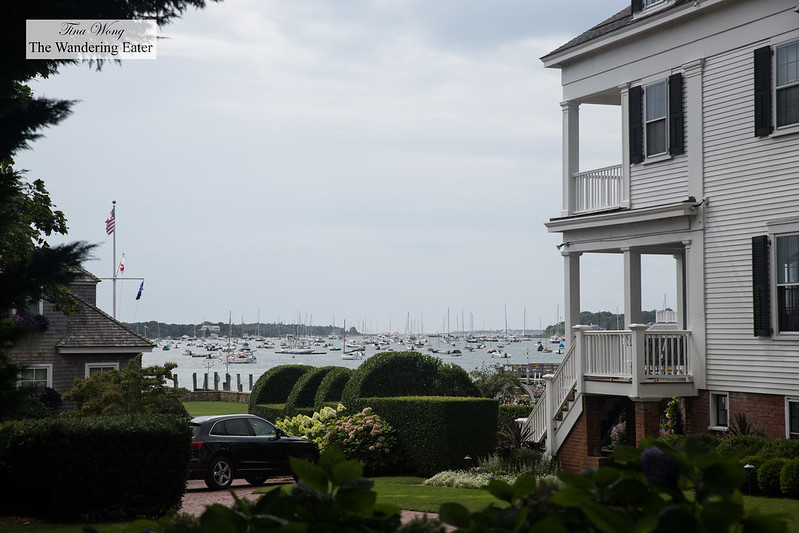 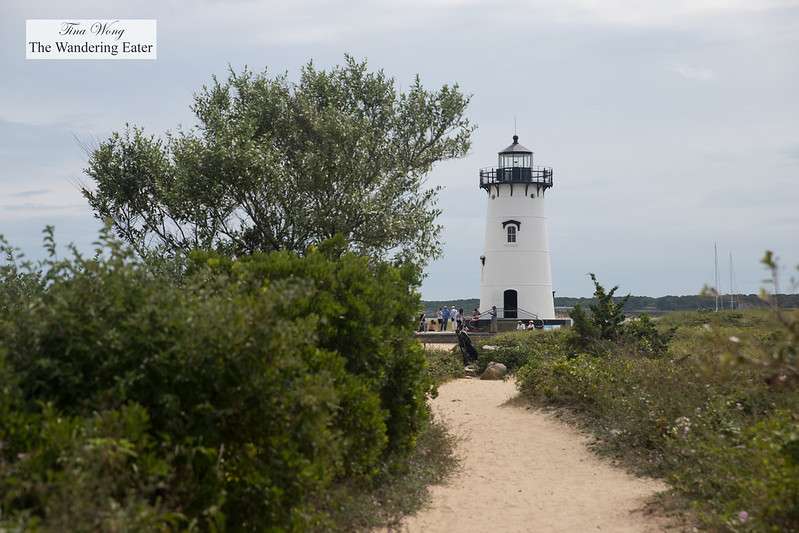 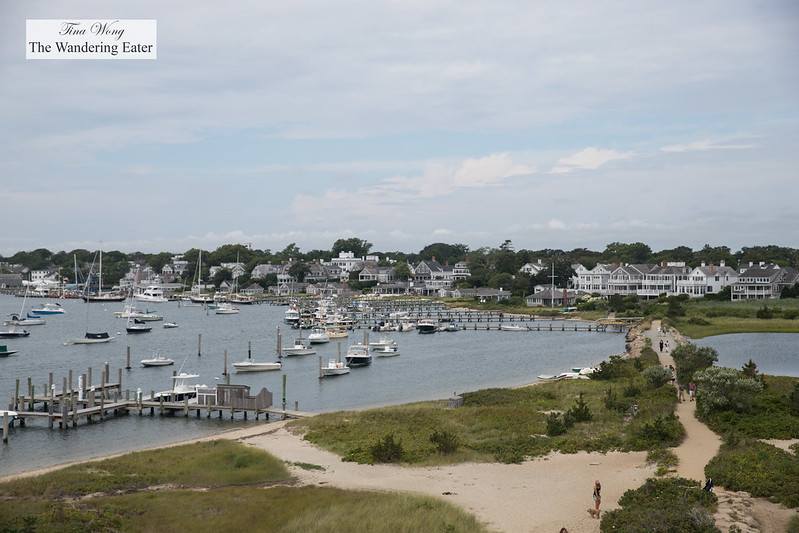 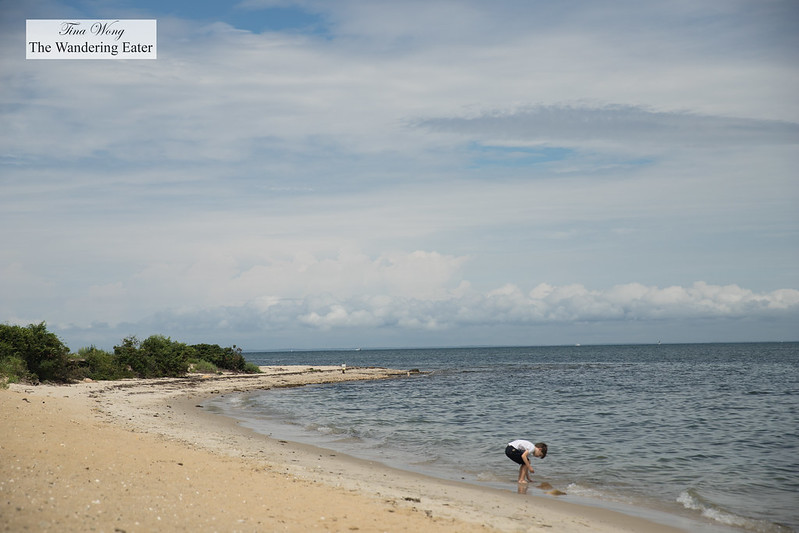 It’s a very pleasant, short walk to the Edgartown Lighthouse. Seeing the beautiful Cape Cod and Georgian style homes with lush floral gardens as we walked through, it’s hard not to be captivated by the views. As we arrived, to the lighthouse and made our way up, it’s a lovely sight to see the various sailboats out on the ocean. We strolled our way to Fuller Street Beach that’s by the lighthouse and got our time in the sun since the skies cleared up and families start rolling in since it’s the early afternoon. 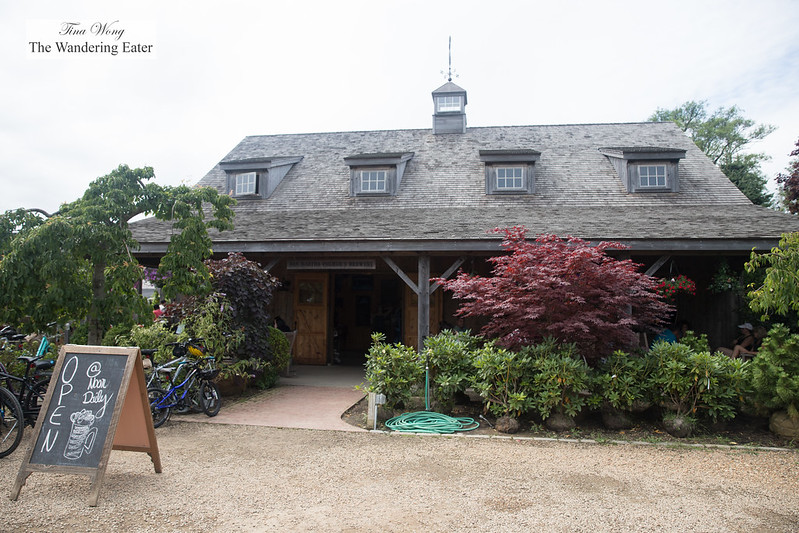 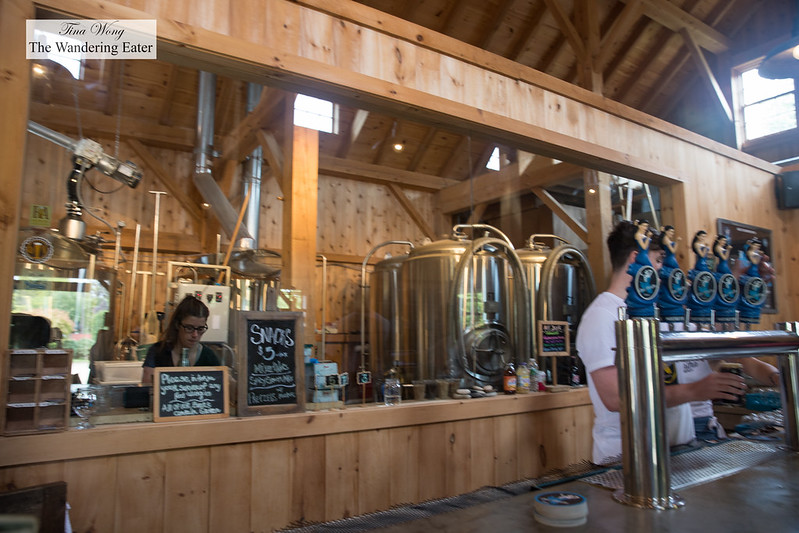 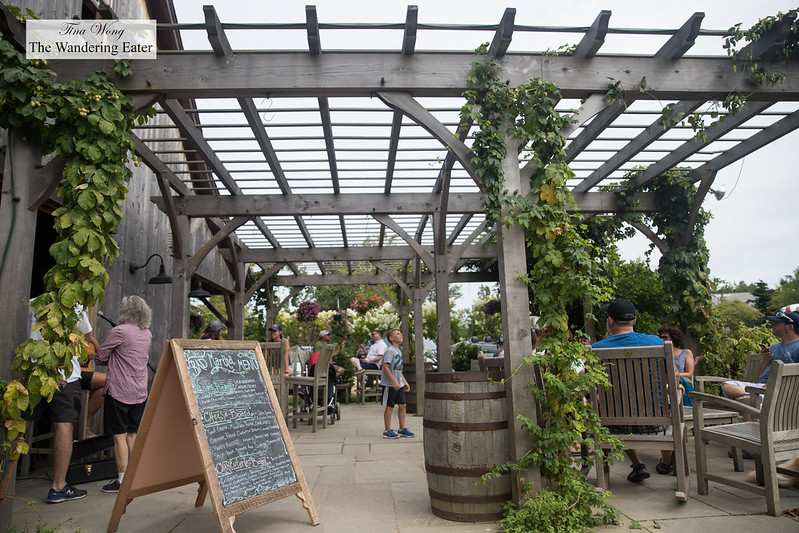 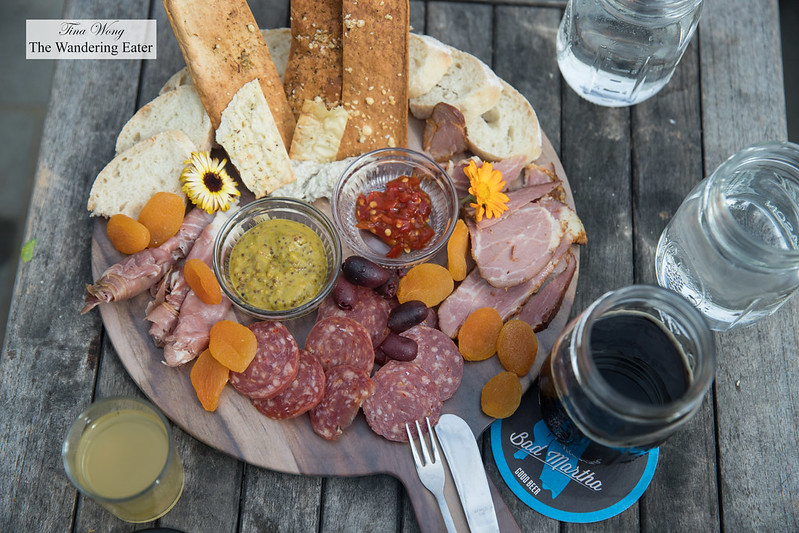 For a place to kick back, relax and have good, locally made beer do head over to Bad Martha Brewery, especially on the weekend (we were there on Sunday), where they invite an acoustic guitarist to perform out on the outdoor space. Groups varying in size forming circles either in chairs or standing around outside, enjoying their company, brews and for some their cheese and/or charcuterie platter. The beers were very good and our favorite that was served at the time is the Bourbon Barrel Brown is an old ale style that was smooth, dark brew and a touch of malt with aromas of bourbon since it’s aged in bourbon barrels. The Summer Ale was a very good thirst quencher that felt light on the palate with just the right amount of crispness and acidity (and makes for a great shandy). The charcuterie platter is practically a (meat-centered) meal for two people. The Cajun spiced tasso ham was the best part besides the side of spicy pepper jam. The thick cut salami and whole mustard were very good too. 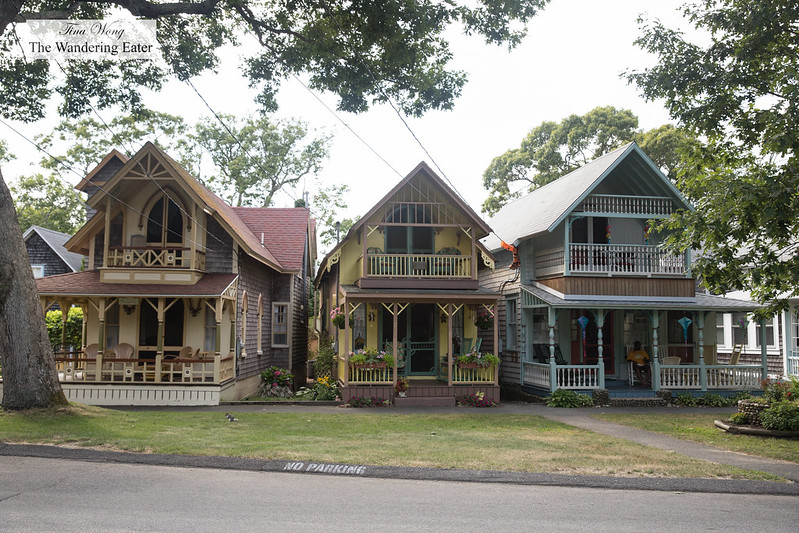 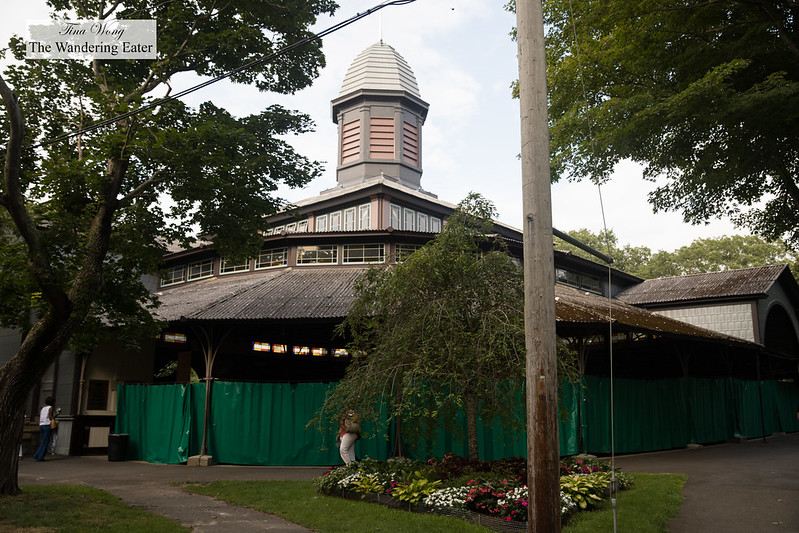 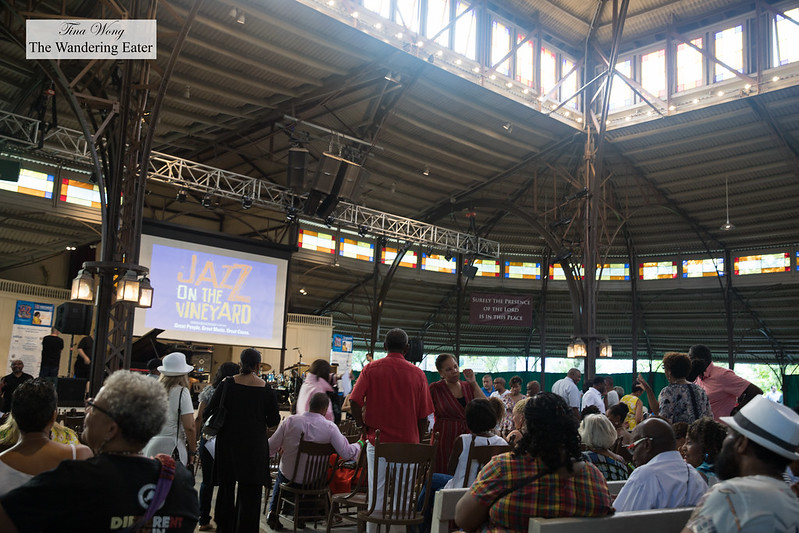 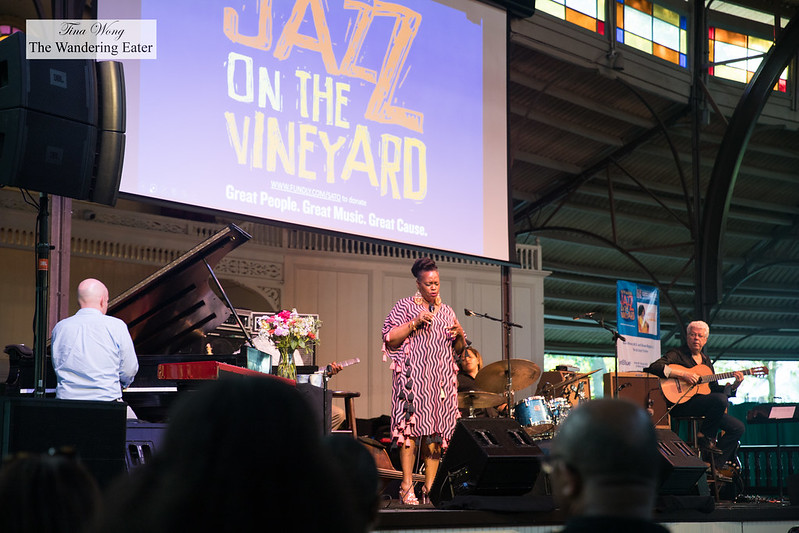 One of the main reasons why we planned to go out to Martha’s Vineyard was for my friend’s colleague, Dr. Ken Alleyne, organized this annual fundraiser concert called Jazz on the Vineyard featuring Grammy Award winner Dianne Reeves. Ms. Reeves has an amazing voice of an opera singer — she can go really low like baritone and go as high as mezzo-soprano — and she can project without a microphone if she didn’t have to use one. She can definitely entertain an audience and her band was great, especially the base player, pianist and drummer.

The non-profit organization that this concert benefit is Student Achievement Through Opportunity (SATO), a Connecticut-based organization working to close the achievement gap for minority students by helping families to bridge the “opportunity gap” for kids. 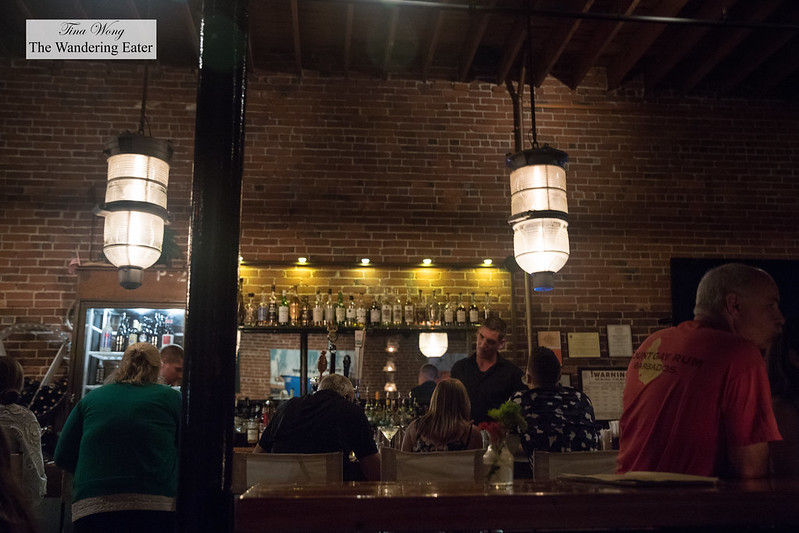 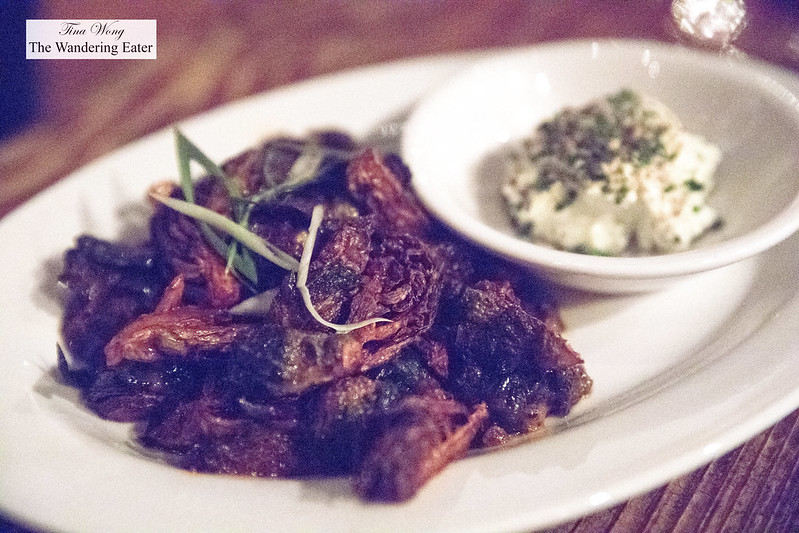 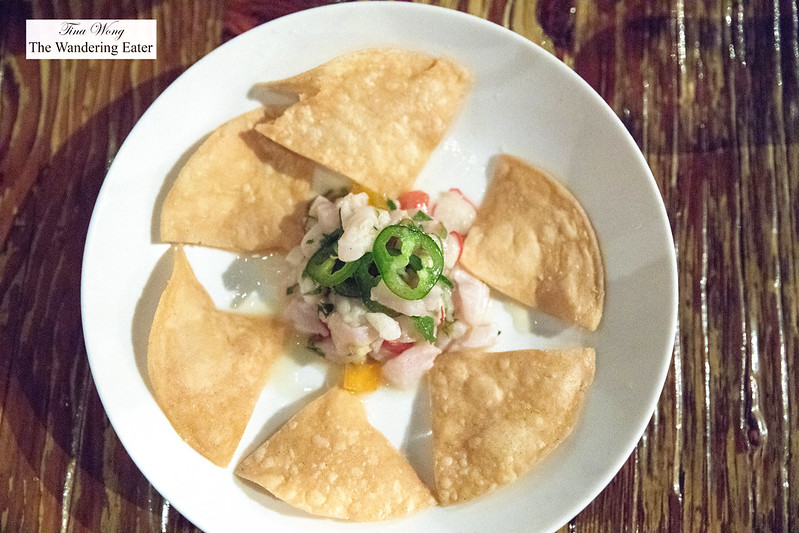 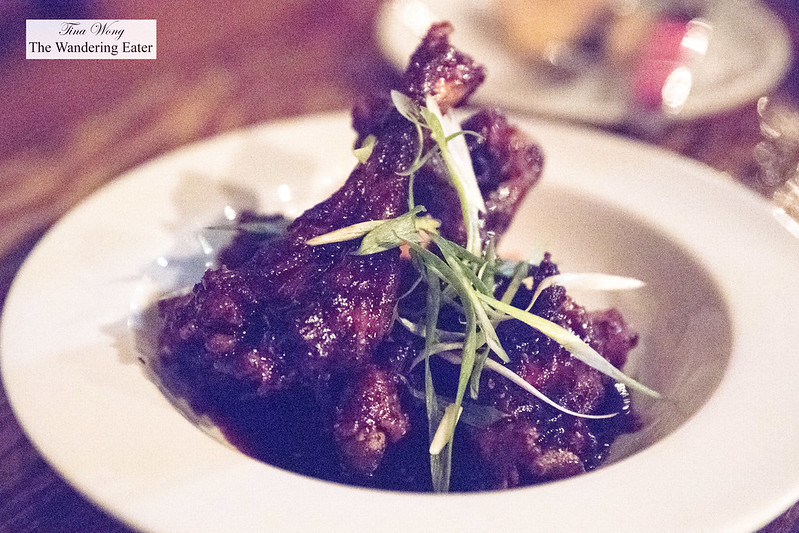 One last place we had dinner was The Port Hunter. It’s a creative gastropub that serves unique bar food that has familiar flavors and ingredients but it’s more of the “why haven’t I thunk of it before?” The sea bass ceviche was fresh, clean yet wonderfully spicy from the jalapeno peppers. The Buffalo style Brussels sprouts with a side of blue cheese foam was a smart way to have Brussels sprouts beyond just frying it. Tossed in a tangy, mildly spicy sauce then have the salty, pungent blue cheese foam gave a punch of flavor but not weigh down the dish further.

The highlight of this entire meal though is the bowl of duck wings. It’s braised then deep fried, tossed in a sweet-savory ginger soy sauce glaze. It’s indulgent, deeply satisfying and finger licking kind of affair. We loved these wings so much that we ordered another round and had an other to go to save for the next morning.