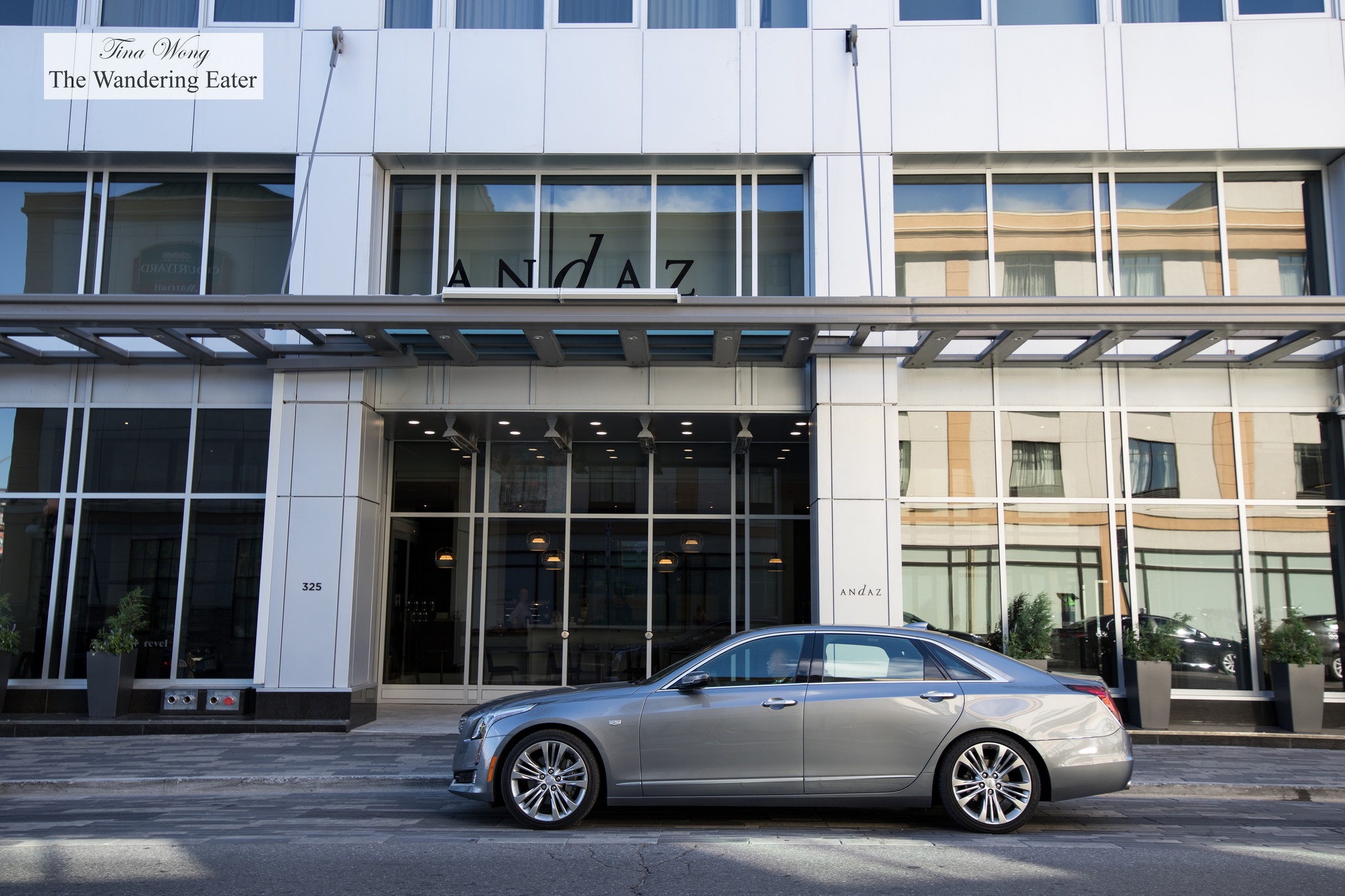 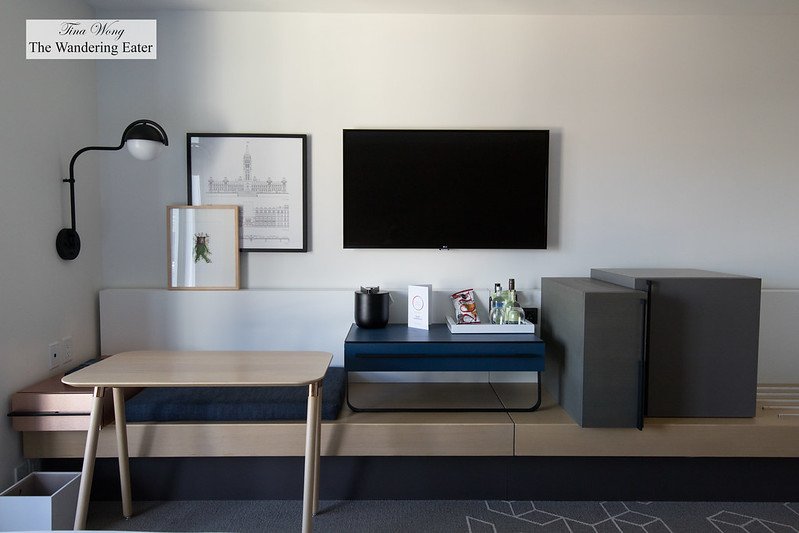 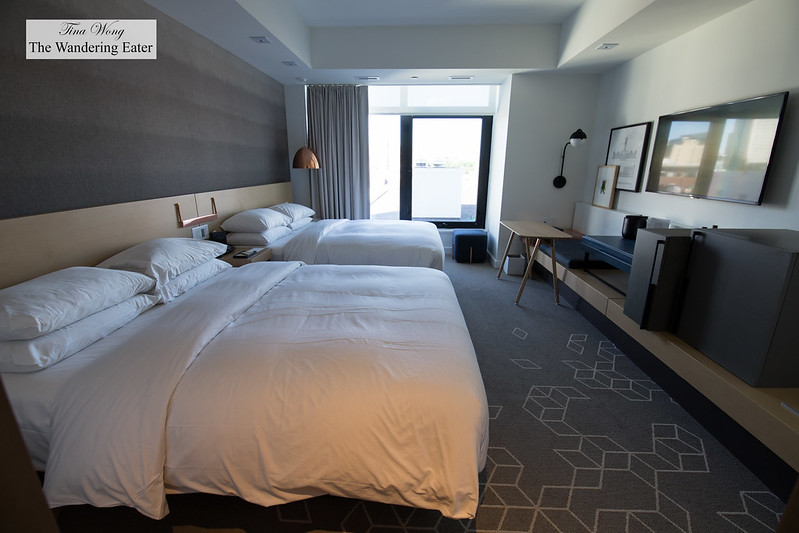 Andaz Ottawa Byward Market was our home base when we were staying in Ottawa. This hotel juts up as the most prominent new high-rise in the ByWard Market, a 19th-century commercial district that now hums with both artisan goods shops and venerable Canadian department stores like Simon’s and Hudson’s Bay. Trendy bars and a few of the city’s best restaurants round out the mix. Art also meets power in this area between the National Gallery of Canada and Parliament Hill. All of these locations are within a fifteen to twenty minutes of walking so a car isn’t needed to explore this part of town (and deal with the expensive parking rates in the neighborhood).

It opened in 2016 with 200 rooms. It is the first push into the country for Andaz, a boutique Hyatt brand. In the design, some of the hotel’s Canadian nods might be so subtle as to appear invisible to the naked eye (like an oval hostess stand in the shape of Lake Ontario), but in the restaurants, Canadian tastes leap out as distinct. The 24-hour fitness centre on the 16th floor sports floor-to-ceiling windows for an optimum view while you work out.

My room took the minimalist, clean look to new levels, with just a copper light fixture and two art sketches warming up the nearly all-white space. A walk-in closet with automatic lighting and a full-length mirror was appreciated. Even better was the multipurpose desk replacement: a small round blonde-wood table with chair across from a built-in bench, ideal for one or more person to work, sip a drink or enjoy a meal. Sweeping views of the Canada’s Parliament and beyond, was the room’s most inviting feature of all. The room was quiet at night and bed was firm and very comfortable to sleep in. 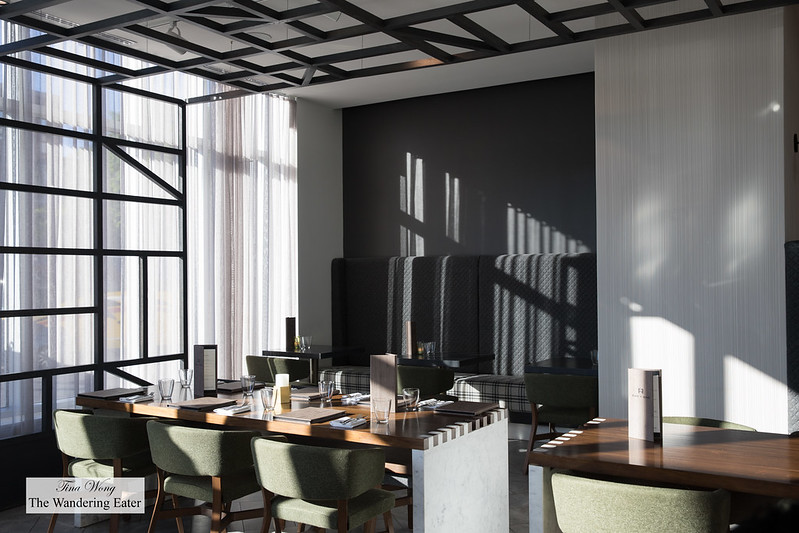 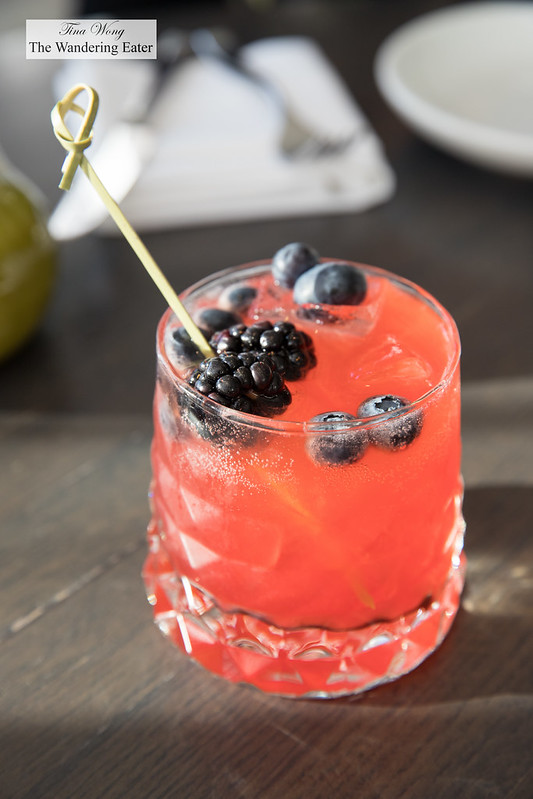 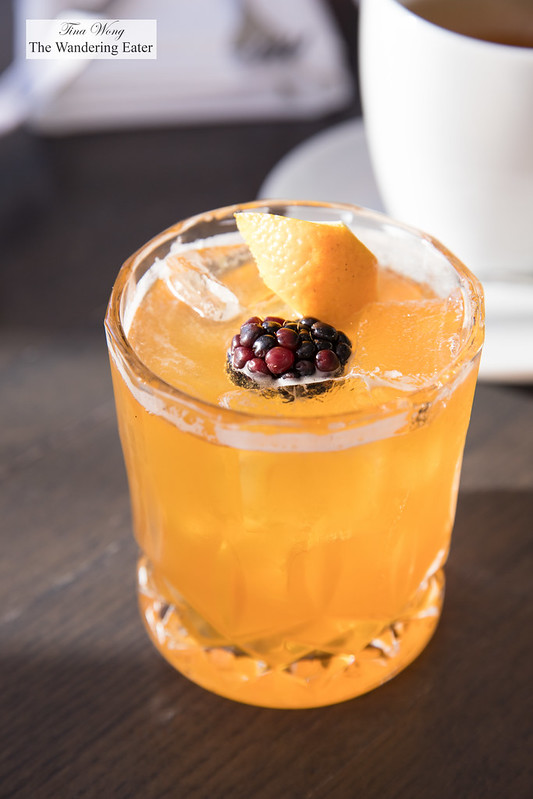 We had dinner at Feast + Revel, taking the same design cues throughout the hotel of having the clean lines and with comforting varying grays color scheme with plush seating. We started with drinks of The Countdown – a fruity, generally sweet cocktail made of Aperol, blackberry-blueberry syrup, Amaro Montenegro, lemon topped with soda water. The Rhubarb Spritz is a very nice non-alcoholic beverage that speaks to the summer weather that was pleasantly sweet but didn’t feel cloying like a regular fruity soda. It’s a mixture of Split Tree Cocktail Co. Rhubarb & Elderflower cordial, bitter orange syrup, soda water, and Kinsip hibiscus rosehip bitters. 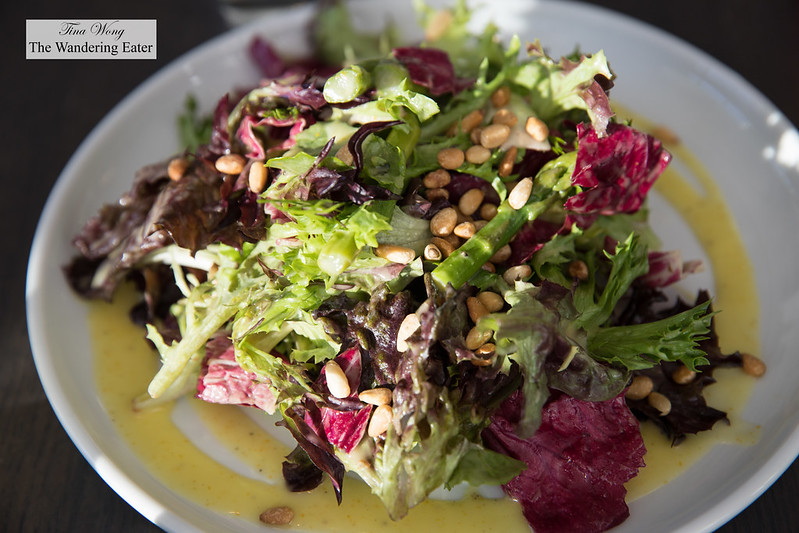 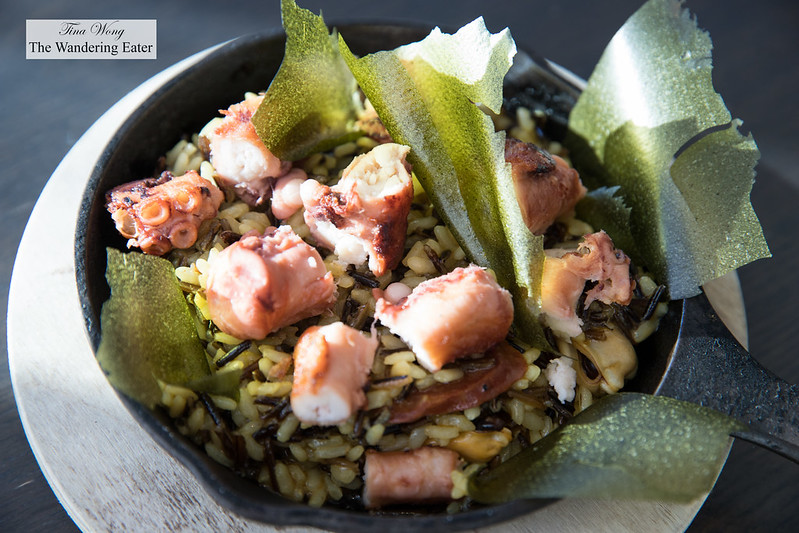 Starting off with something healthy, we had a large plate of greens. A mix of tender yet crisp asparagus, spring mix lettuce, lemon and Kricklewood sunflower oil dressing, roasted pine nuts, and fresh dill. The dill and pine nuts livened up the salad adding some fresh herbaceous flavors and the toasted pine nuts added a nutty, slightly pine-y/floral flavor.

The octopus paella was an interesting take on the Spanish rice dish. The aborio and wild rice mixture was softer and wetter than what I’ve expected in a paella but the bold seafood and briny flavors of the ocean smacked my palate (in a good way). The meaty bites of tender octopus, Prince Edward Island mussels, locally made chorizo flavored the rice nicely and the sea lettuce flakes that were tucked in various places around the cast iron pan added some crisp texture to contrast the soft and creamy. You can definitely get a sense that the kitchen is trying to use as much locally produced food in this particular dish and it works well. The wild rice is indigenous to Canada and the various seafood is locally caught. 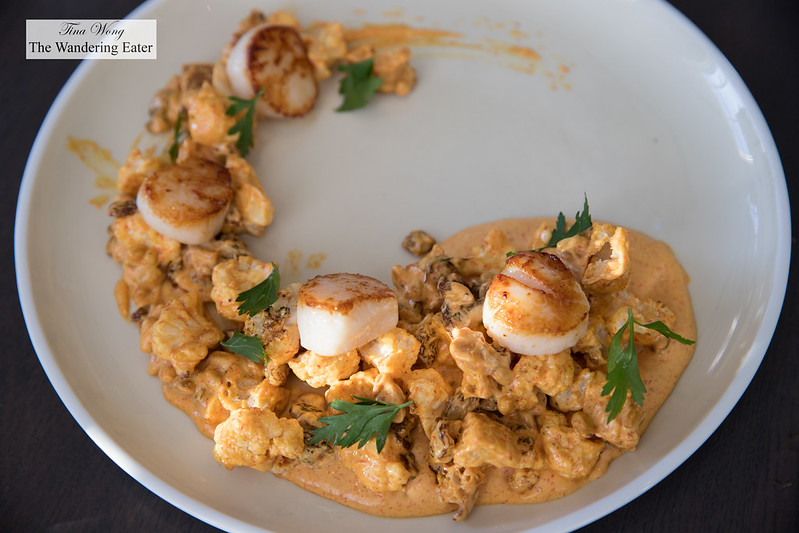 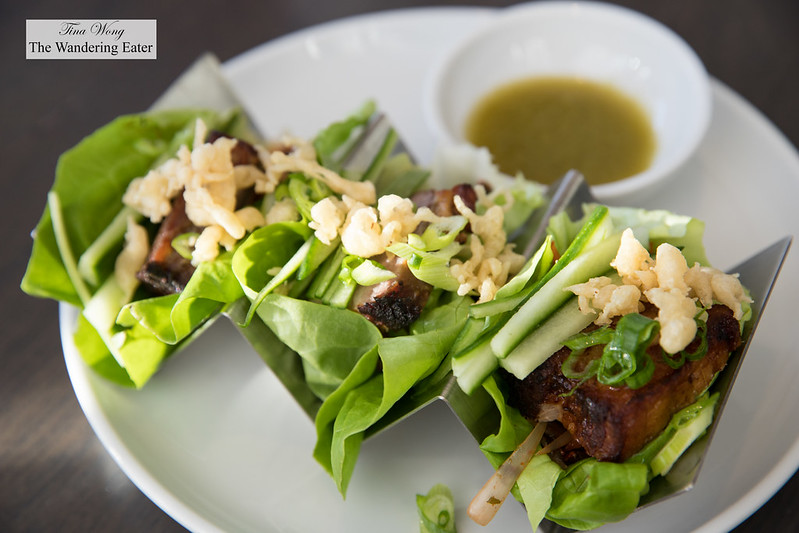 The large plate of seared sea scallops with roasted cauliflower, saffron aioli, sultana raisins, croutons, pine nuts, and parsley was beautifully plated. The scallops were cooked well. The cauliflower added some crunch and subtle sweetness. The pine nuts and parsley added another layer of delicious flavor. If anything, there was too much aioli on that plate that my friends and I needed to strain out the food items we wanted to eat from the excess aioli. I understand what the chef was trying to do in terms of plating design but there’s a limit as to how much aioli one could eat no matter how well it’s made.

The pork belly “tacos” were adorable and tasty. The lettuce wrap was the substitute for what would be a tortilla and it added a refreshing and crisp foil to the meaty, thick-cut roasted Nagano pork belly topped with Dominican City Brewing Co. (an Ottawa-based brewery) Two Flags IPA spicy glaze. The spring ramp kimchi added a delicate onion-y kick and the tempura bits added crunch. 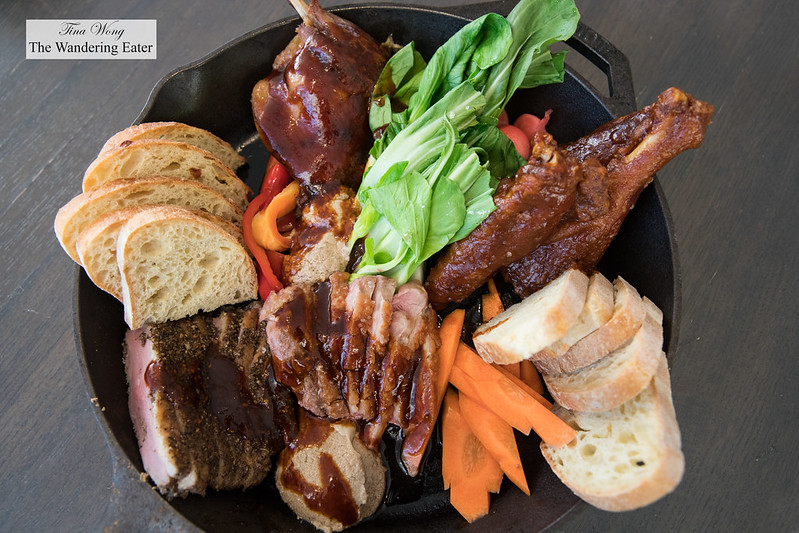 The Duck for Four is a cast iron pan filled with roast duck breast, smoked pastrami style duck breast, duck leg confit, fried duck wings, various pickled vegetables like carrots, radishes, and bell peppers, a side of raw bok choy, duck liver aioli and fresh bread. All parts of the duck were cooked well and seasoned just fine. The overall execution was generally good though some parts of the duck were better than others. I really enjoyed the pastrami version for the unusual spicing of duck and the duck liver aioli. The others were fine but I found the medium-thick gravy that coated most of this pan added some moisture but not much flavor to the dish (just use the duck liver aioli for the extra duck-flavored kick). I do appreciate the fresh pickled vegetables and raw bok choy to cleanse the palate between bites or the need of having some kind of vegetables to all of the duck we’re eating. 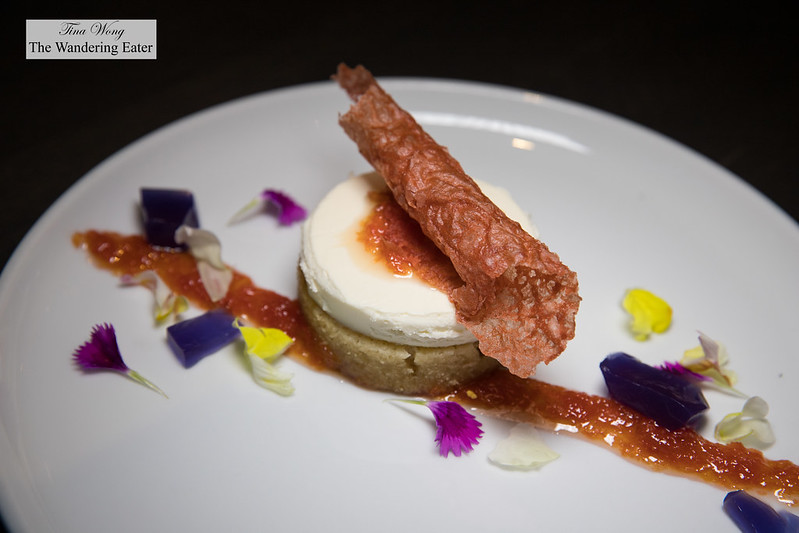 We were pretty full and shared one dessert – buttermilk pound cake layered with lavender panna cotta, Pluck Verbena Blues gelée, raspberry tuile, and grapefruit marmalade. The dessert was very good. Not overwhelmingly lavender like you’d be eating potpourri. The cake was sweet and moist enough and the panna cotta was firm (not too much but on the firm end).

Overall, the dinner at Feast + Revel was very good. There is a focus on utilizing local products and produce all of the restaurant’s dishes respectfully and give them a twist (may it be Spanish or French). The wait staff was patient and friendly to answer questions. 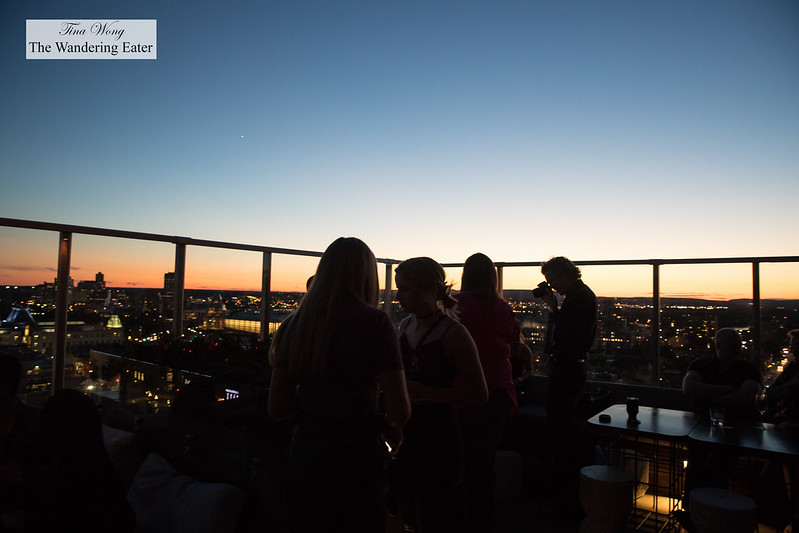 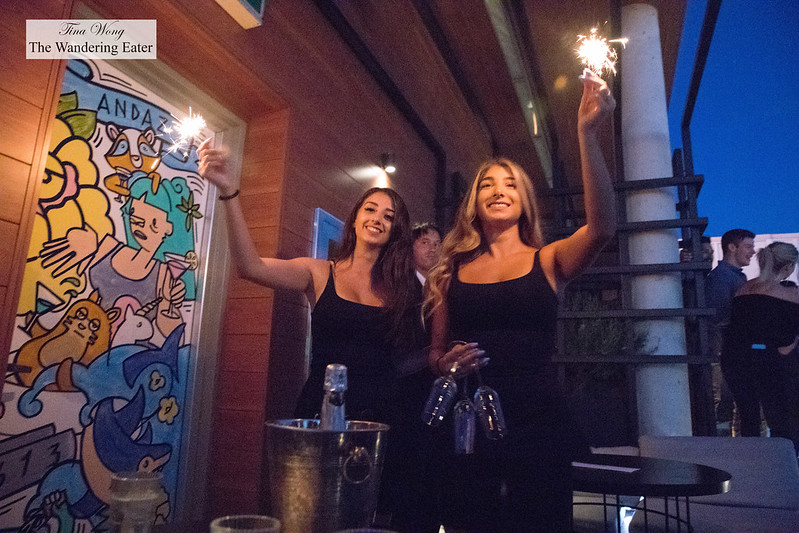 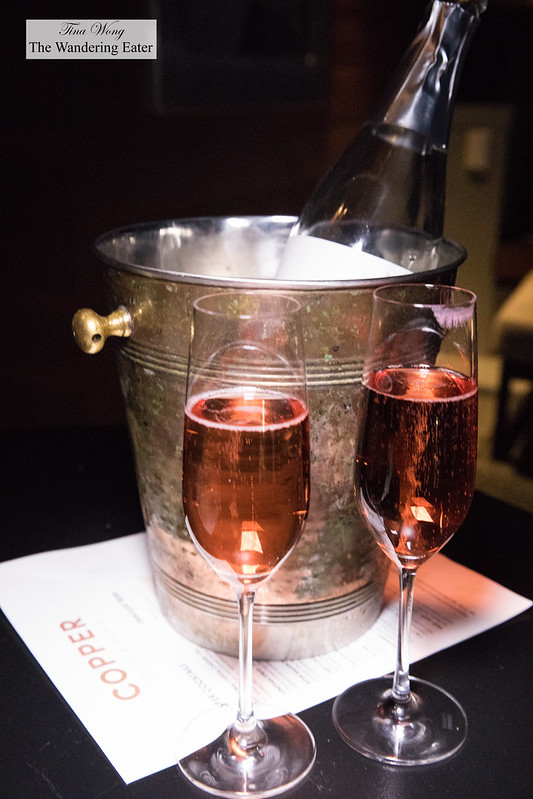 We had went up the rooftop lounge Copper Spirits and Sights for a nightcap. It was loud and bustling since it was a Friday night and there’s a large group in the center. Interestingly when we sat down and started to figure out what we wanted to drink, about ten minutes later a pair of young, lovely waitresses came to our table with sparklers and a bucket of rosé. Flummoxed about this small spectacle, one of the waitresses said there’s a drinking game involved with an anonymous buyer. The buyer himself came up to our table (he’s friendly and looked like local who is in the finance industry) and wanted us to play the part of picking out the next table who should receive their own bottle of rosé and go along with his suggestion of a couple who’s on the other side of the lounge. My friends and I toasted with our glasses to the young man who bought our wine. We didn’t bother with ordering a cocktail since that bottle was enough to drink for the evening.