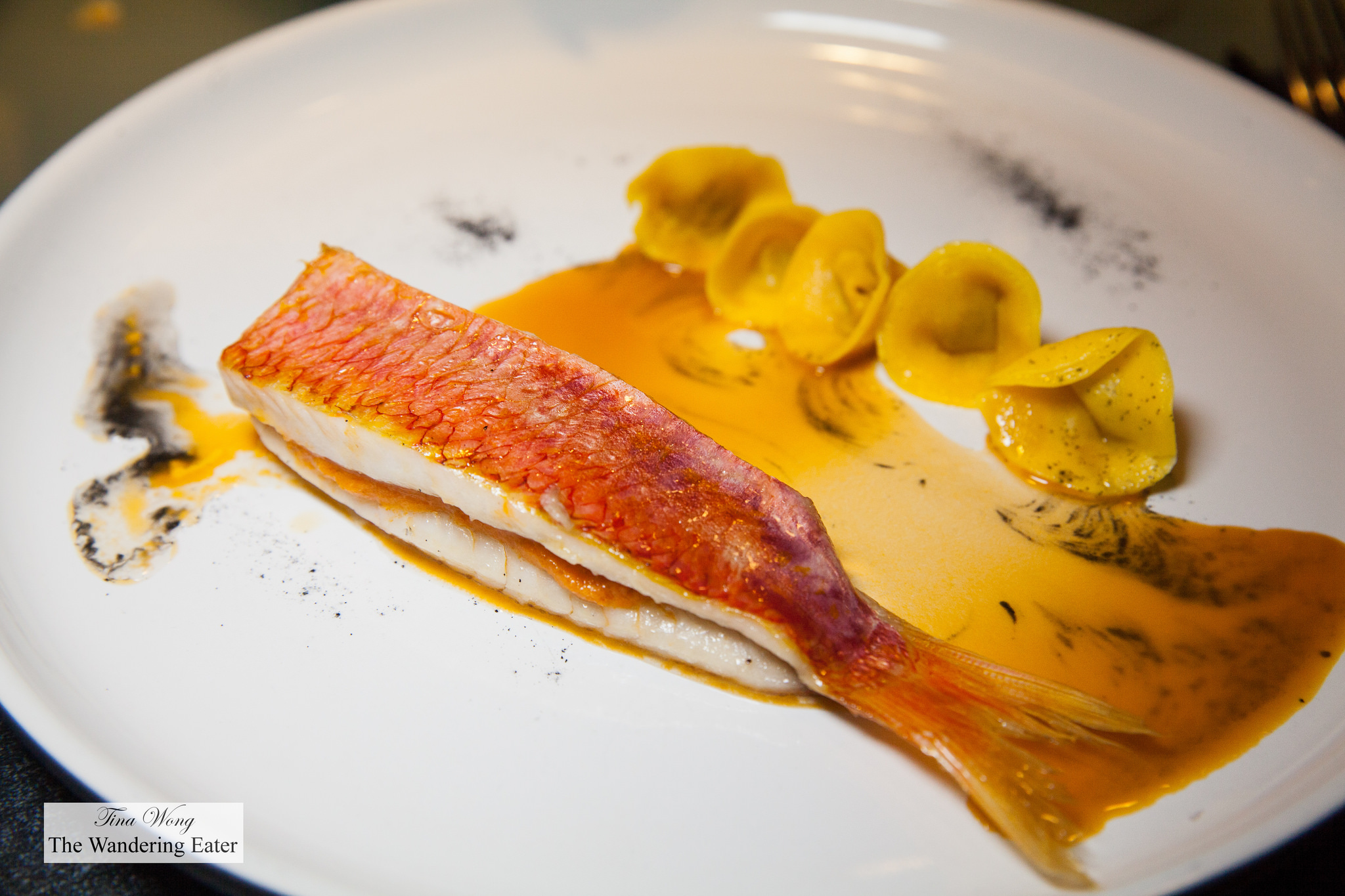 I’ve recently traveled to Rome and Florence, Italy! Both cities were great and they definitely have different personalities despite both places have a lot of pride for their city. The posts I will be putting up are going to be in relative random order rather than chronological. I will start off with a very good, creative dinner at Glass Hostaria led by its chef and proprietor Cristina Bowerman. 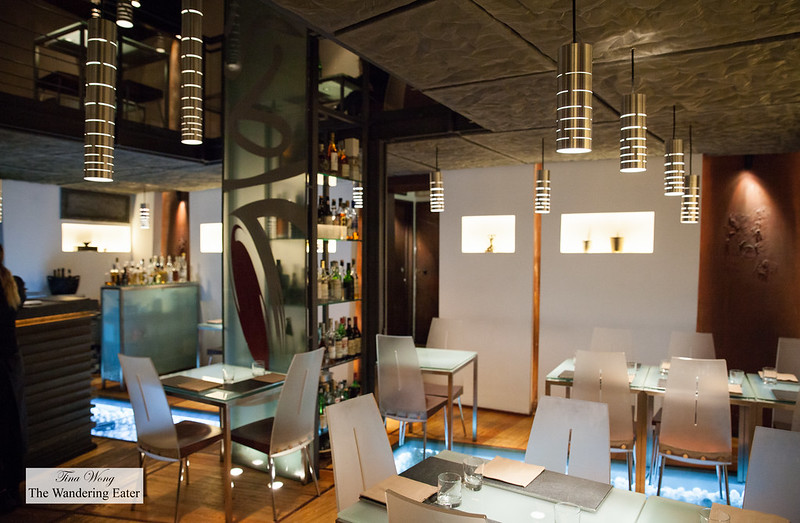 Almost as renowned for its design as it is for its food, Glass Hostaria is a culinary fixture of the historic alleyways of Rome. The restaurant itself is a wonderful mix of old and new, and thus reflects perfectly the Trastevere district of the city where it is based.

Based at one end of the Vicolo del Cinque, one of the most well-traveled routes between the Piazzas of Trilussa and Santa Maria, Glass Hostaria overlooks the cobbled streets, outdoor chairs and tables, and ivy-clad walls that characterize this neighborhood. Although the humble exterior befits the location, the restaurant’s interior is another story altogether. Designed by the collaborative efforts of architects and artists Andrea Lupacchini, Marco Filippetti and Alberto Brandolini, the restaurant features modern and industrial elements that allow for an intricate play of light and shadow across the mezzanine floors, yet still showcases some of the building’s original features.

True to its name, glass plays a key role in the aesthetic design. With glass cases embedded in the floors, guests can walk over wine bottles displayed beneath their feet, while lit recesses in the walls highlight further bottles on display. The tables themselves are of frosted glass, and create a striking contrast against the textured panels decorating the walls. The high ceilings are accentuated by futuristic lights hanging over the dining room, helping to give the restaurant a feel of space yet still feeling intimate. 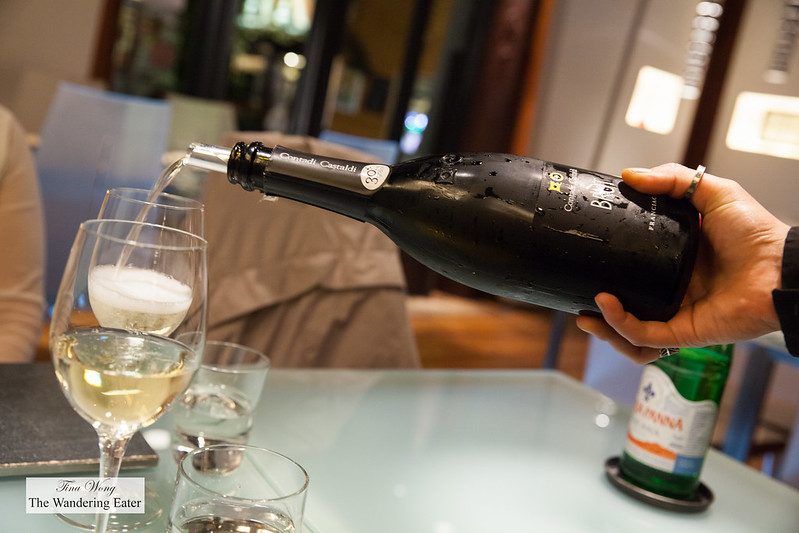 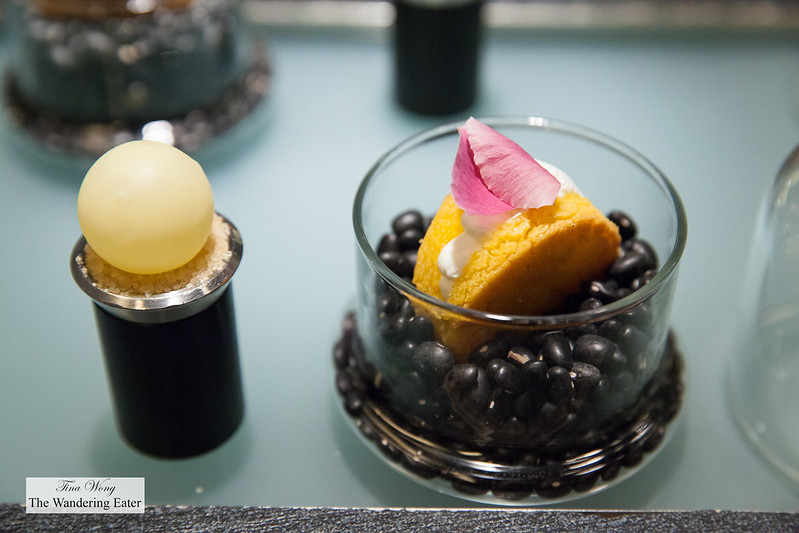 We started off with a welcoming wine of a refined, refreshingly dry Contadi Castaldi Brut Franciacorta served along with beautiful and playful amuse bouches of sphere of Pisco Sour (filled with the liquid cocktail) and goat cheese arepa. These little snacks were tasty. The Pisco Sour tasted like the beverage and there was definitely a hit of the mentioned brandy and the arepa had its spirit despite of its dressed up appearance. The flavors of sweet corn and its coarse texture was there and the tangy goat cheese was the perfect foil. 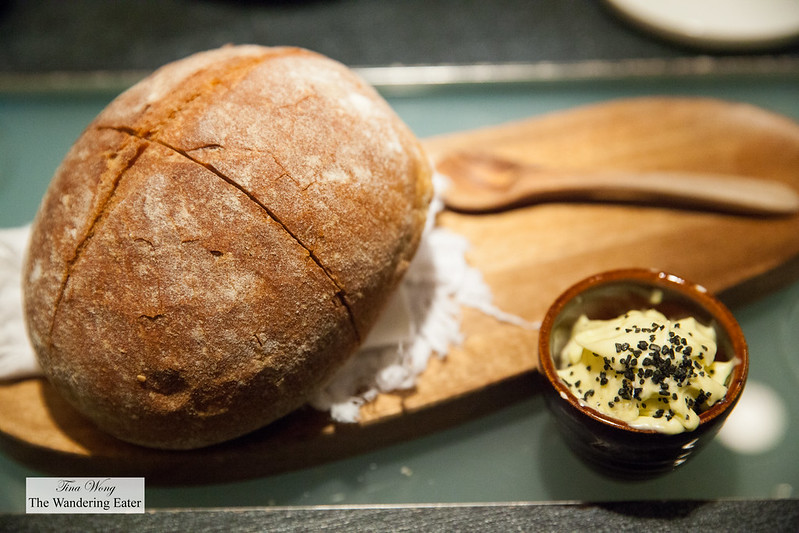 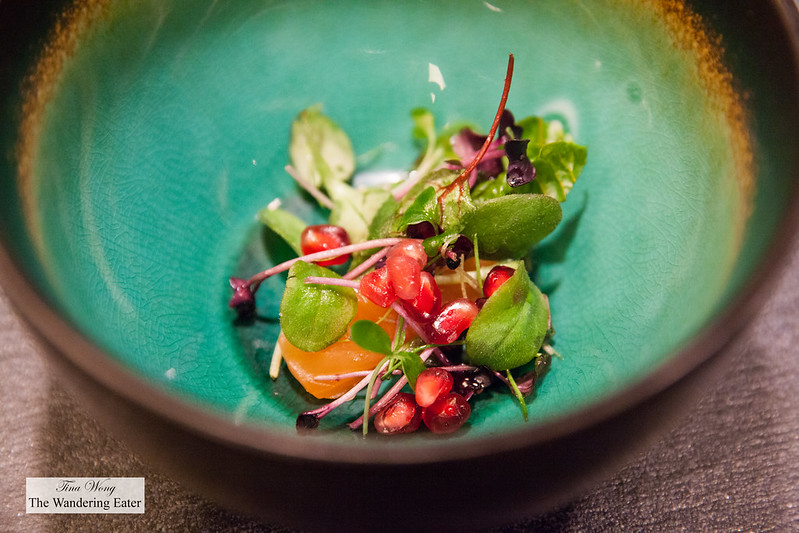 Still in the phase of the amuse, we were presented a freshly baked loaf of Roman-style bread that’s rustic and addictive to eat with the extra olive oil mousse flecked in black salt. It’s a good accompaniment to the salmon tataki, pomegranate salad that’s refreshing and had bright flavors to waken up the palate to the first course. 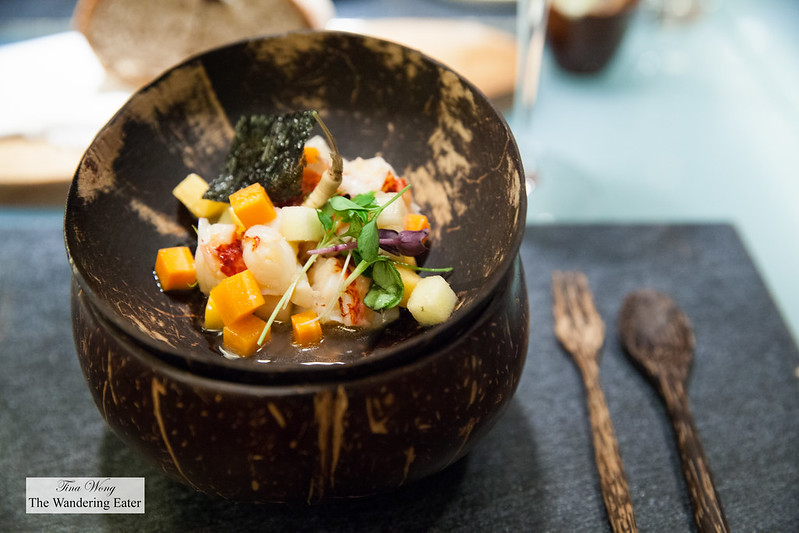 The rock lobster, apple, mango, carrots, baby parnsip, seaweed and yuzu dressing continued on the clean, refreshing, and light notes. It’s sweet without overtly so from the citrus-y, tart yuzu dressing. The lobster was perfectly cooked. 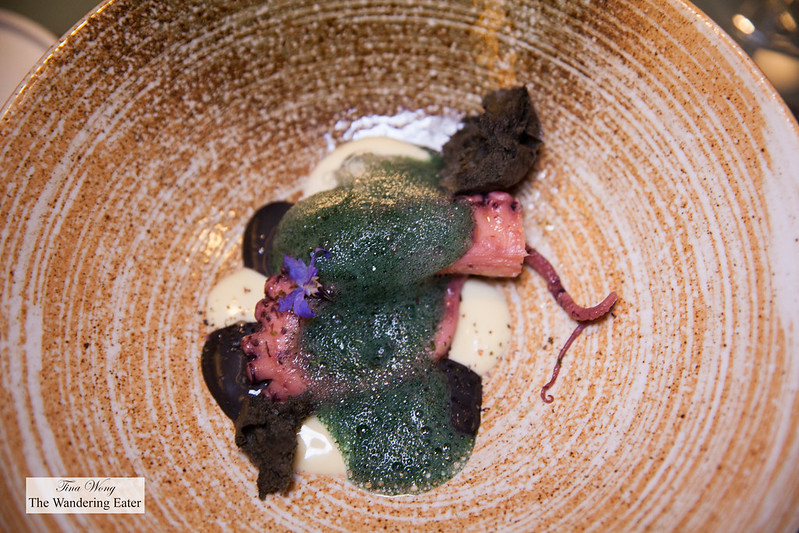 The octopus confit with apples four ways was a very creative dish that utilizes that creature besides the norm of just grilling it and serve it with vegetables. The octopus was incredibly tender and the apples four ways were served as fresh, cooked, fermented and spherified. Each of the technique used for the apples added some another layer of flavor and texture ranging from fresh to gently funky and crisp to gentle bubbles on the teeth. 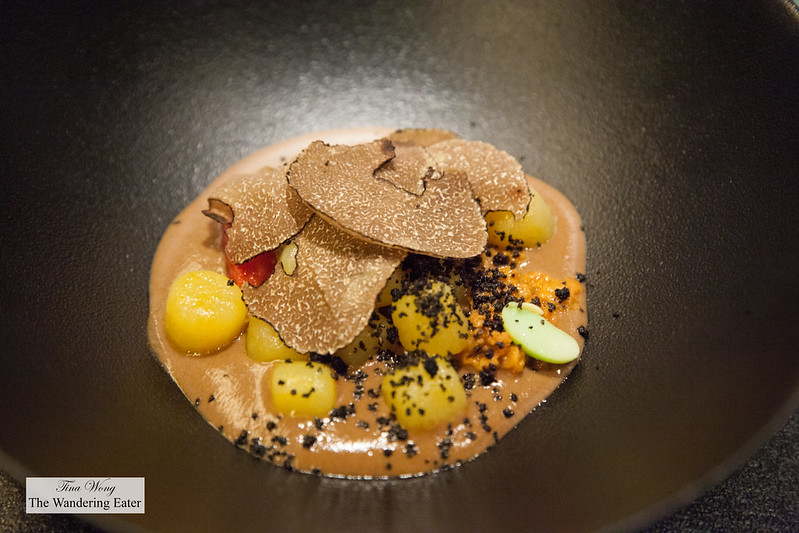 The gnocchi dish was my favorite of the evening. Topped with luxurious and aromatic black truffle, it’s also mixed in with edamame and uni (sea urchin). The sum of its parts created this unbelievable bowl of dumplings. The savory umami of the truffle and sauce mixed with the briny sweetness of the uni was an explosion of flavors. The gnocchi was a soft, pillowy vehicles of flavor. 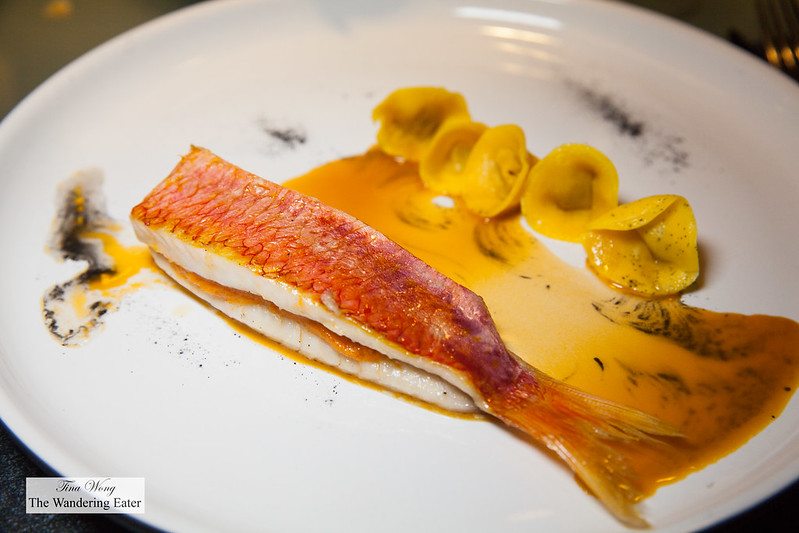 The red mullet, foie gras ravioli, and red mullet consomme was delicious. Typically, I would think the foie gras would dominate the fish because of its big flavors but the silky liver just mimicked the idea of butter and its flavors were restrained due to the intense seafood flavors from the red mullet consomme. The fish was perfectly cooked and the ravioli added a touch of substance to what is the main entree, so to speak, of the dinner. 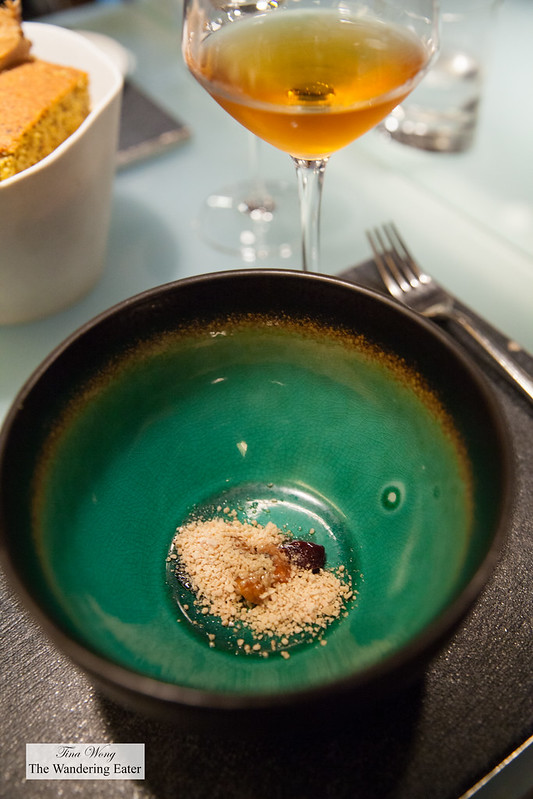 The next highlight for me was the pre-dessert of sweet bread (not the offal that I adore), soy sauce, cherry, and foie gras paired with the Principe Pallavicini ‘Stillato’ Passito di Malvasia Puntinata dessert wine. This pairing was astounding and the dish itself was sublime with the perfect balance of intense sweetness and savory. The wine has a beautiful bouquet of apricots and ripe tropical fruits but on the palate it’s marvelously balanced between acidity and sweetness. A fresh creamy sip with a long finish reminiscent of dry figs and dates. 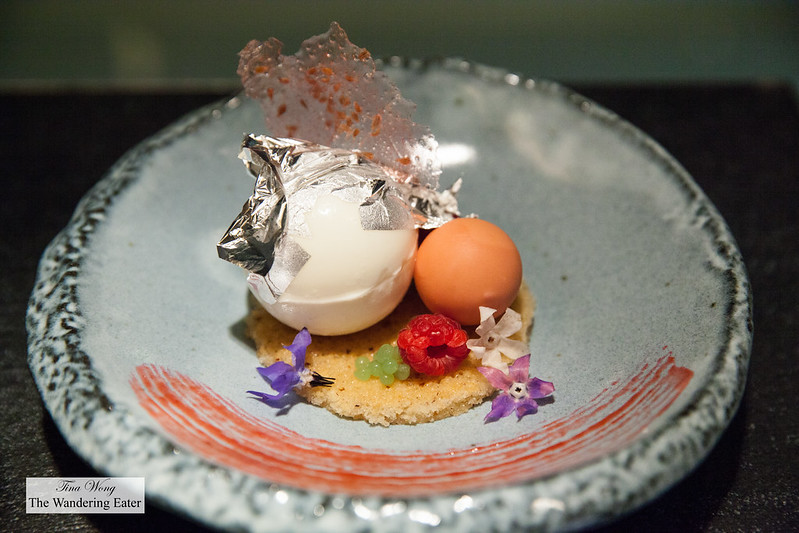 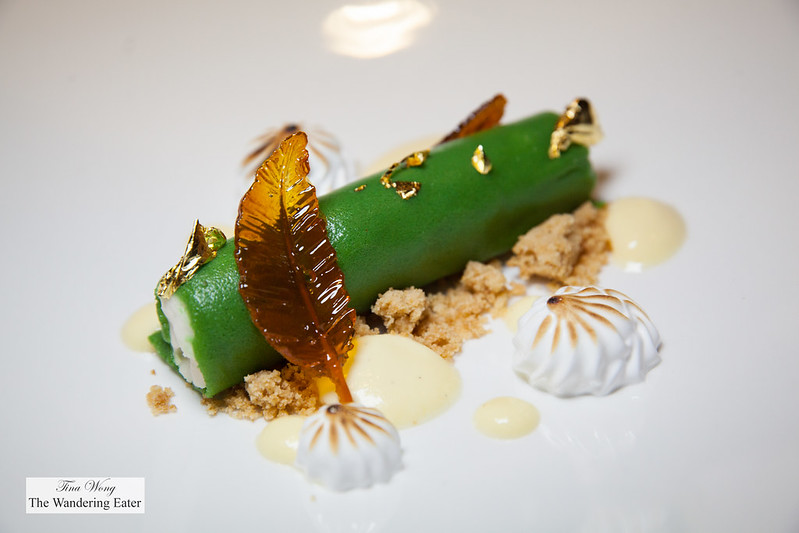 The desserts we shared were a pretty sphere of anise panna cotta with frangipane, raspberry bonbon, edible silver leaf and mint. The panna cotta was firm and had a delicate hint of anise. The The raspberry bonbon added some acidity and some crunch to the creamy flavors. The other dessert of marzipan filled with cream, edible gold leaf, caramel leaf-shaped candy, toasted meringue, and sage custard was the sweeter of the two desserts but it was enjoyable. 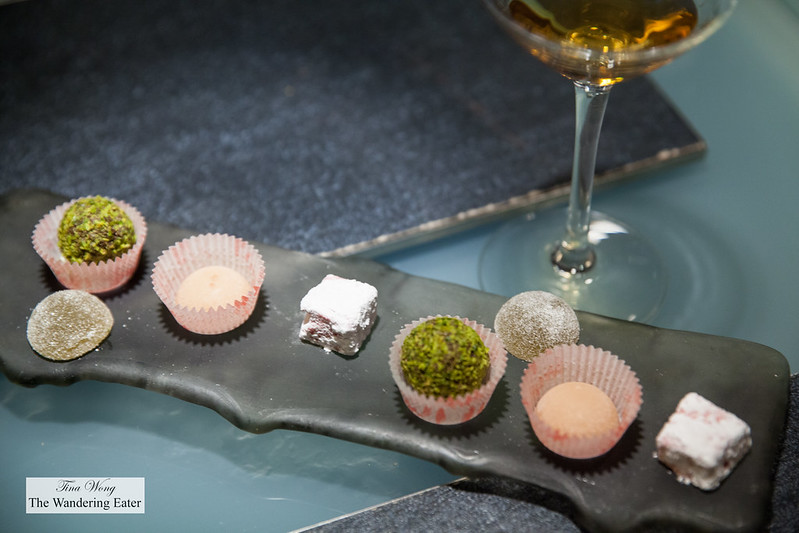