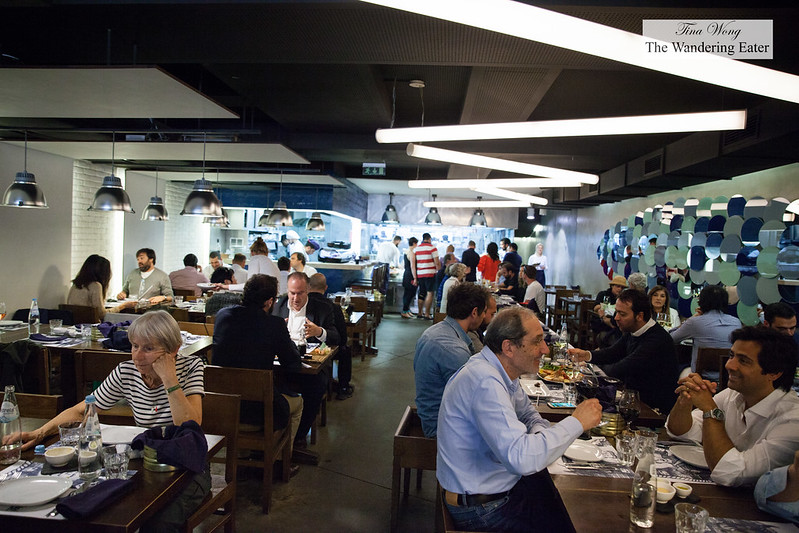 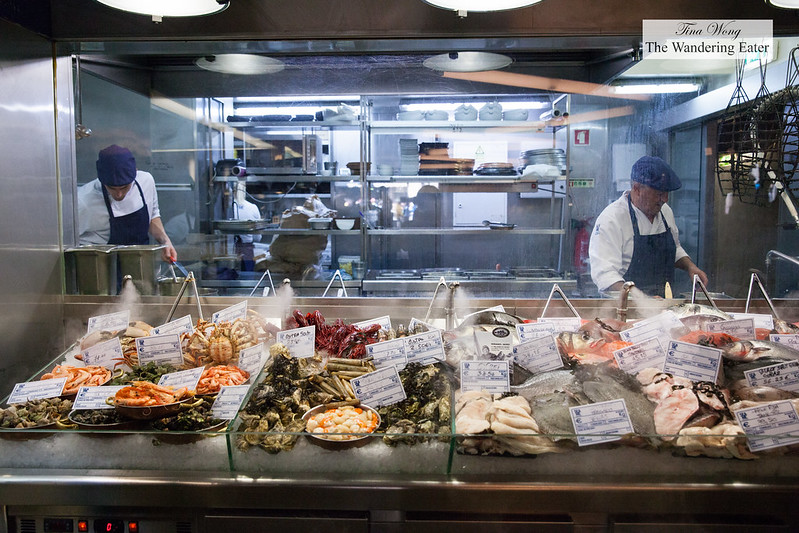 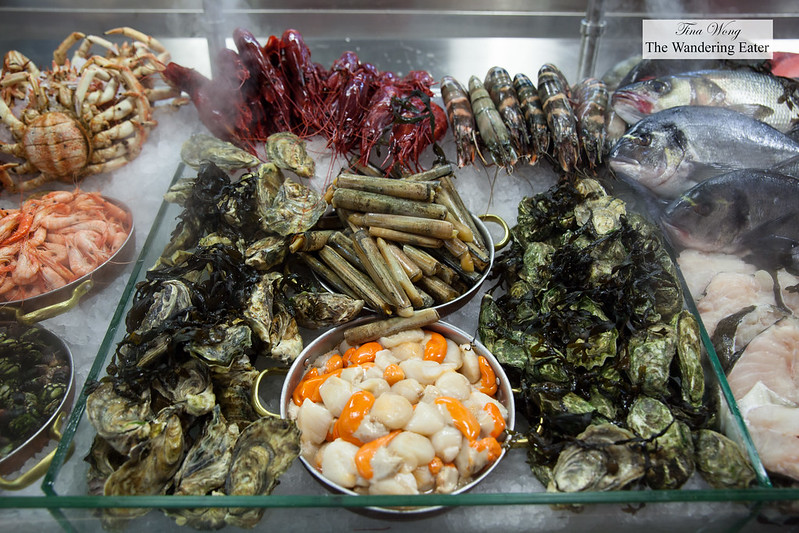 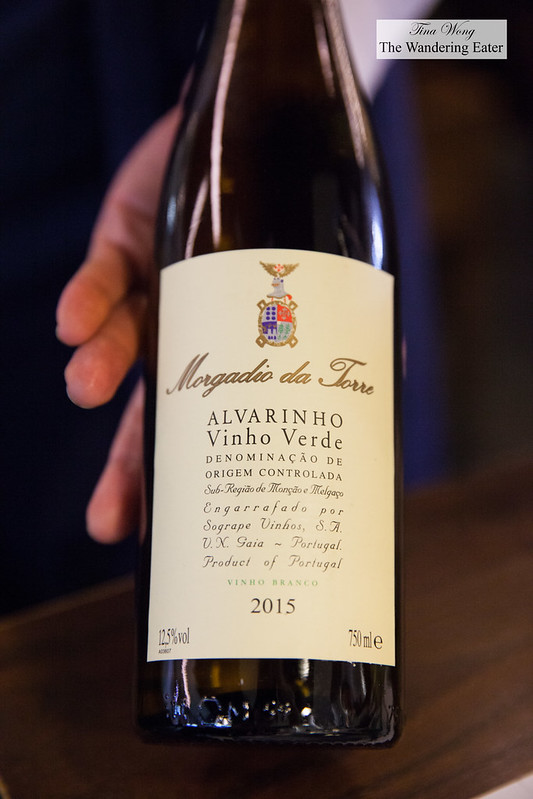 Recently, I flew out to Lisbon and Madrid for a change of scene. (If you were following my Instagram, you are aware of what I ate for the most part.) Lisbon is a very beautiful, historical city. The beautiful 18th century buildings covered in colorful Portuguese tiles. The charming yellow trams that run through the city.

Lisbon is commonly referred to the “City of Seven Hills” for a very good reason – you’re walking constantly on steep hills and valleys. And the sidewalks and streets are mostly built with smooth, small stones that sometimes you’ll hear the tires of cars driving squeak as they try to accelerate uphill.

Beyond the terrain, it’s a great food city, especially for its seafood and one of my best meals in Lisbon is at Sea Me Peixaria Moderna. This is a modern seafood restaurant that has a display of some of the fresh catches of the day in the back of the restaurant. Sea Me serves classic Portuguese dishes and creative sushi. Don’t discount the sushi because their sushi chefs are not Japanese. What matters most for sushi is the freshness of the seafood and Lisbon’s coast is rich of that and Sea Me’s seafood is mostly local and pristine. 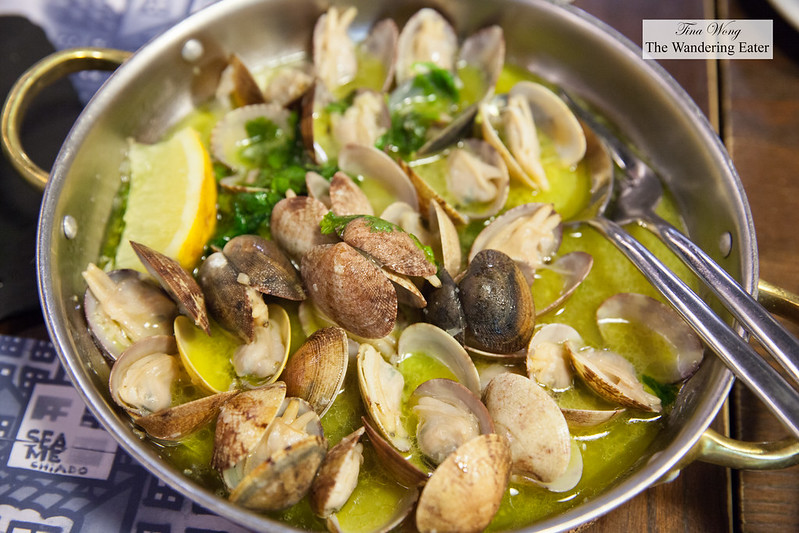 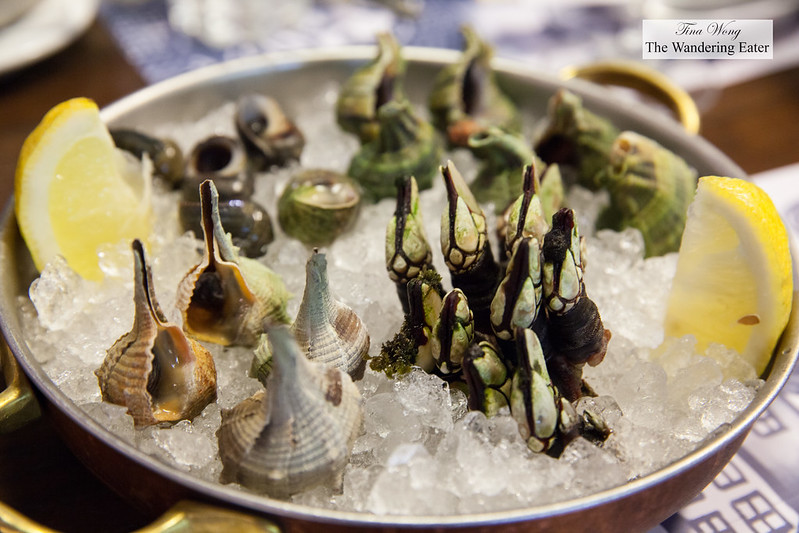 We started off our meal with a classic vinho verde (green wine) to pair our seafood centered dishes. This wine is from Morgadia da Torre (2015) Rias Baixas region and it’s a wonderful wine. Rich fruit flavors of pineapple and peach are matched with a grapefruit-like refreshing acidity and a long mineral finish and it would go perfectly with the seafood.

The first round of dishes were classics – clams and olive oil, cooked Portuguese style and a variety of steamed and chilled shellfish. The clams and olive oil is a simple dish but it’s incredibly delicious, hitting it with a squeeze of lemon. The clams were sweet and succulent and a joy to eat.

The various shellfish we had were percebes (or goose barnacles), whelks and two types of sea snails. All were tender and cooked perfectly. Each sea creature had its own particular tastes like the percebes starting briny then ending in sweet. One of the sea snails had a particular bitterness. The whelks had sweetness with a tiny bit of chew. 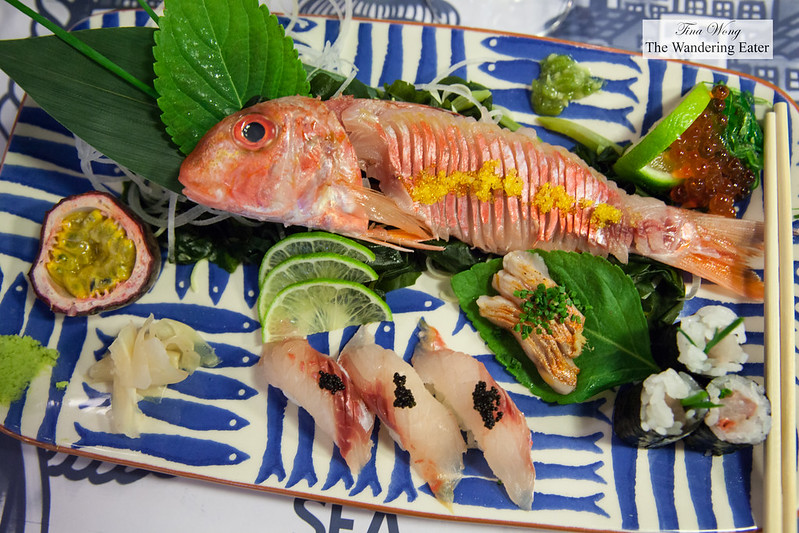 Then we started to get our minds blown with the various sashimi and sushi courses. We were bestowed with a large platter of red mullet and it was served four ways. Sashimi with yellow flying fish roe, nigiri topped with caviar, tataki with chives and maki (hand roll). The best expression of any fish is sashimi style and it’s my preferred way of having this mullet. It’s a super fresh fish. It’s a lean fish and the flavors are clean, delicate, and it’s inherently sweet. The nigiri is the next best version adding some heft with the nicely cooked sushi rice and the subtle brininess of the caviar. The tataki (lightly cooked) fish was good and the hint of onion-y chives was good. For the maki roll, I found the ratio of rice to fish a little too much for my preference but still a fine maki. 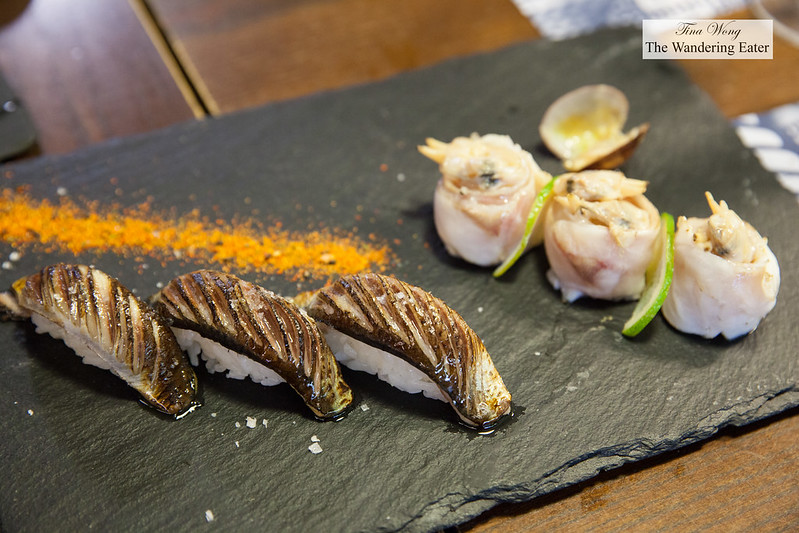 The next plate of sushi was blowtorched sardine nigiri with togarashi and the clam-sea bass uramaki (inside-out roll) were excellent. The uramaki was delicious having the thin slices of lightly cooked sea bass topped with clams that had clean, subtly sweet flavors.

The blowtorched sardine nigiri dipped with the spicy togarashi pepper is a pretty genius sushi and an unforgettable experience for me and my dining companions. The sardine is a common and important fish for the country and merging that with sushi is unexpected and the execution of it was perfection. The sardine wasn’t fishy at all. The blowtorching melts some of the natural fats of the fish, essentially turning it into almost the texture of very soft butter (as seen above with my Instagram photo), and give some smokiness from charring the fish briefly. The piquant togarashi livens up the flavors of the fish and feels like a symphony in the mouth. Until this day, I still crave and dream of having this particular sushi again. 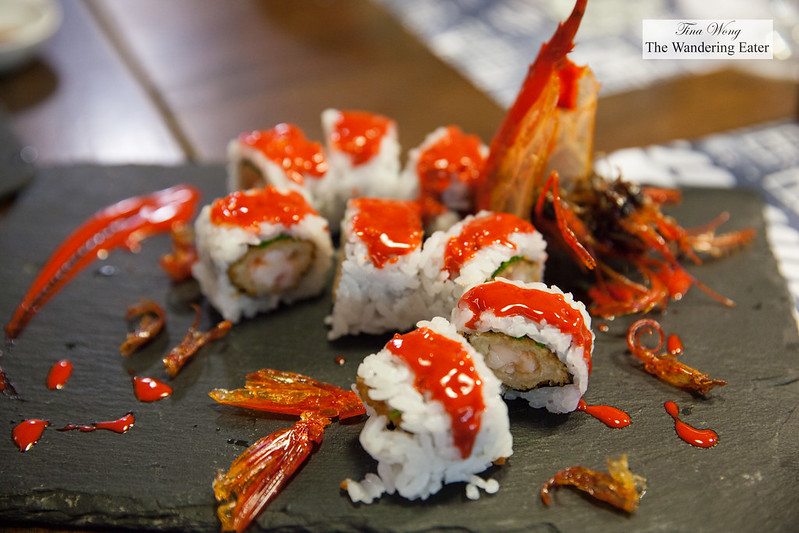 The final sushi course was the Red Dragon Roll made of carabineiro, also called deep-sea cardinal prawns, and chives. This maki is made of the cardinal prawns that’s been fried then rolled with chives, seaweed and rice then topped with topped with the bright red sauce that’s made of the prawns’ heads. It’s a very good maki but the sauce made it even better making it incredibly sweet and savory of the prawns’s essence. 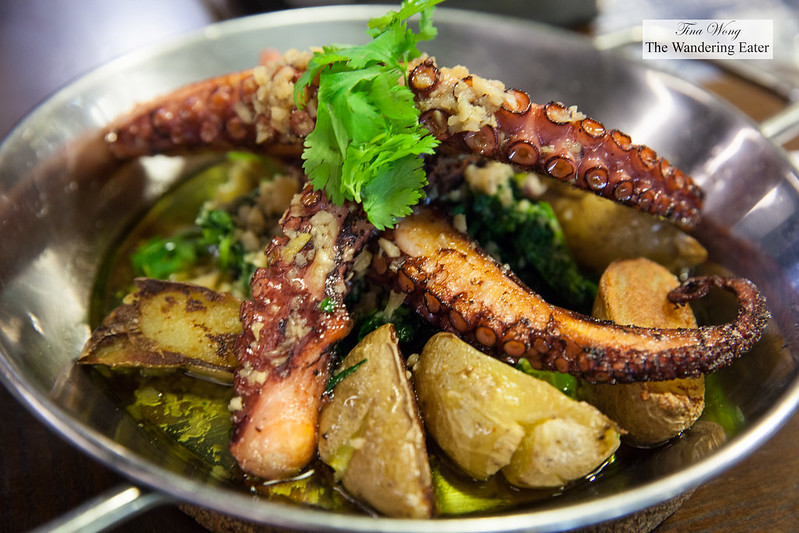 Ending the final savory course with another traditional Portuguese dish, local octopus cooked with potatoes and greens and it’s a very solid dish. The octopus was tender that it was little resistance to cut with a knife. The potatoes were beautifully fried in olive oil that it had this delicately crisp exterior and creamy insides. The greens added a touch of bitterness to add a layer of complexity. 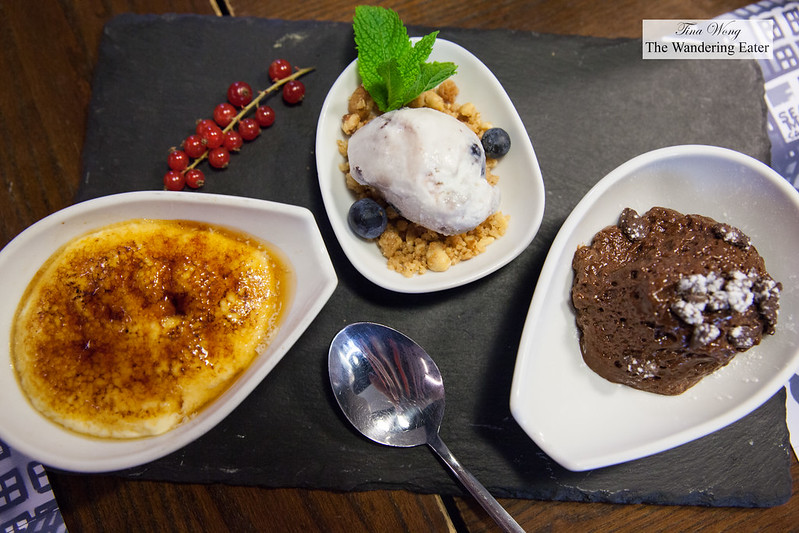 We were pretty darn full at this point but we shared a trio of deserts – a brûléed custard, blueberry ice cream with crumbles, and chocolate mousse. All of the desserts were not too sweet. The custard was creamy and the burnt sugar was good. The blueberry ice cream had good flavor but I prefer my ice cream richer. The chocolate mousse was decadent and while it’s tasty, it’s hard to finish that scoop with a full stomach.

Overall, Sea Me is a great seafood restaurant with friendly, professional service, even if they’re swamped with a restaurant full of customers. I’d definitely go back there again when I’m back in Lisbon. (Note, Sea Me has two locations. We went to the standalone restaurant not the one in Time Out Market.)