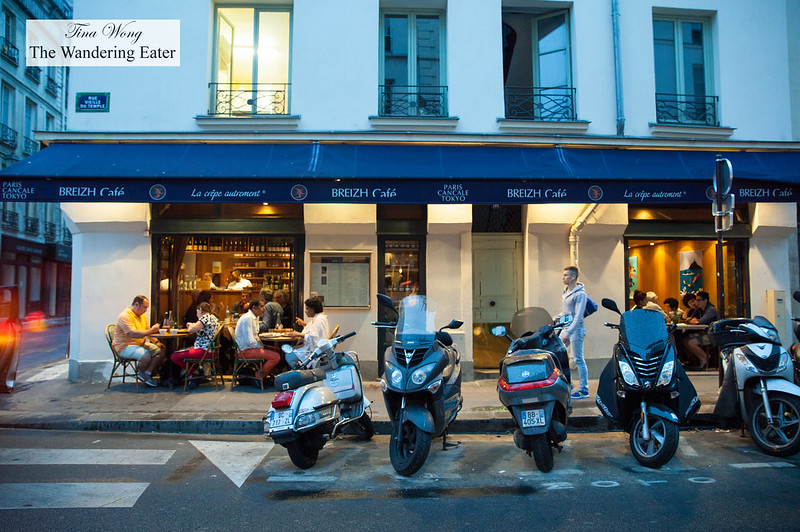 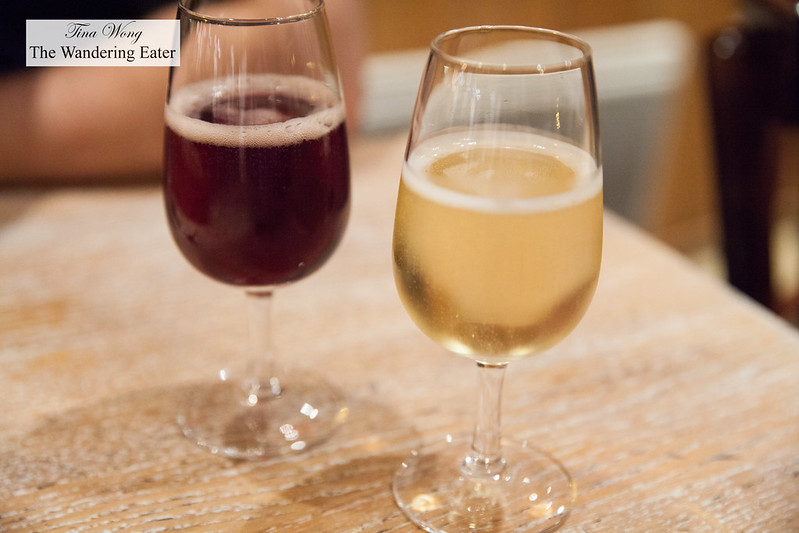 Breizh Café specializes in galettes de blé noir, commonly known as buckwheat crêpes is a great spot for those who crave savory and sweet crêpes served with artisanal French ciders in the hip Marais area of Paris.

It’s no surprise when we arrived around 9:00 PM on a Friday night, the place was buzzing with activity with a mix of tourists and locals eating plates of them and people waiting on the sidelines for either a table or taking their order to-go. After waiting for 15 minutes for a table, we settled down and taken a look at the extensive menu of all the variations of savory (made with organic buckwheat flour) and sweet crêpes, we have noticed there was an extensive use of local ingredients (like dairy and butter products from the famed Bordier Creamery) yet it’s affordable. 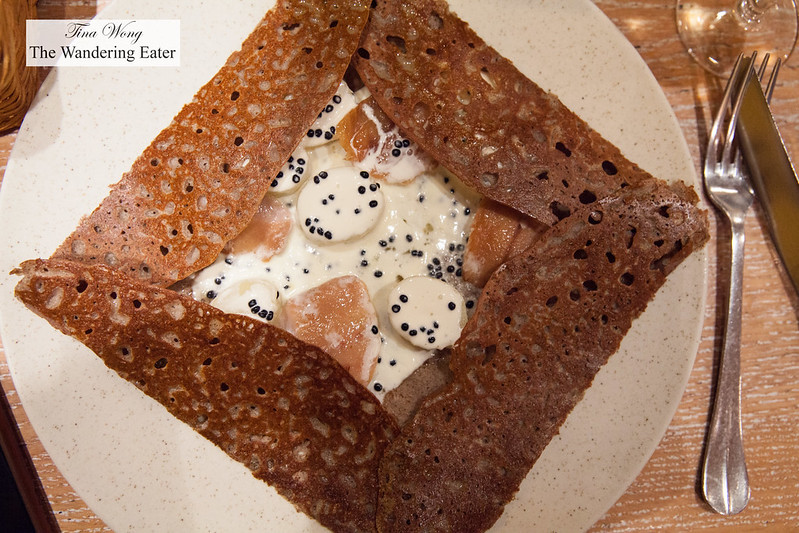 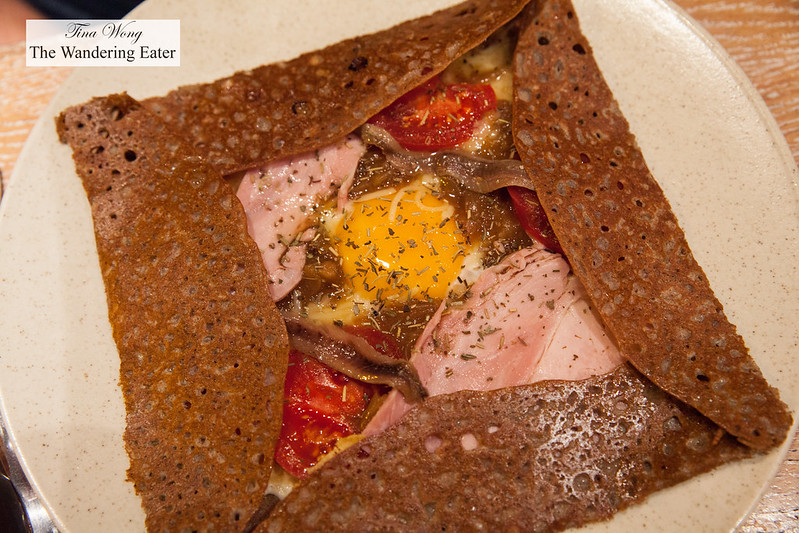 We started off with a hard cider (I forgot which one and the cider list is impressive) for my friend and a hard pear cider for myself since I craved something fruit-forward without the sweetness. Both beverages were delicious.

The savory galettes were worthy of its praise. The thin pancakes were wonderfully crisp on the edges yet pliably soft and has some character beyond the fillings it houses. We had the Cancalaise (13.60€) and the Provencale (12.80€). The former was filled with smoked herring, potatoes, crème fraîche from Bordier Creamery, and herring egg caviar. Lovely cream sauce that wasn’t too rich and the potatoes and smoky herring were a great combination despite the fact I’m not exactly a fan of carb-on-carb (potatoes and galette). The Provencale was filled with ponion confit in cider, tomatoes, ham, anchovies, raw milk Gruyere cheese, sunny side up egg, herbes de Provence, which was tasty but it lacked enough sauce or something to tie all of the ingredients together. 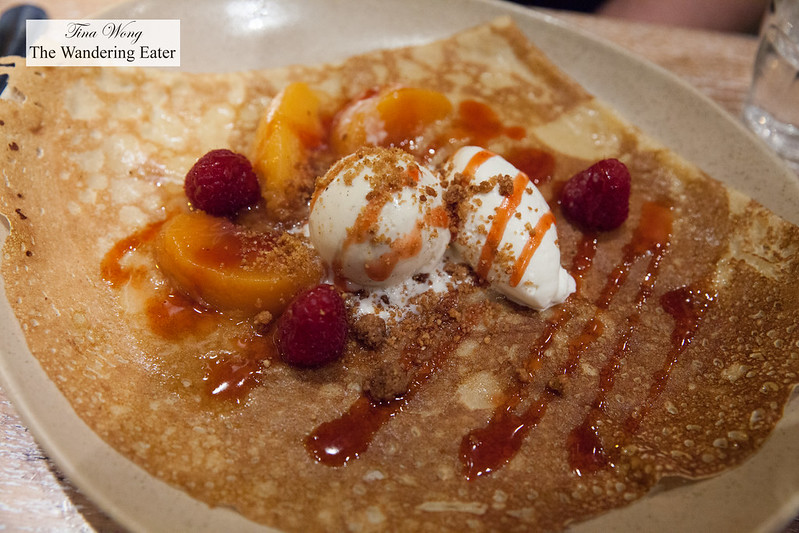 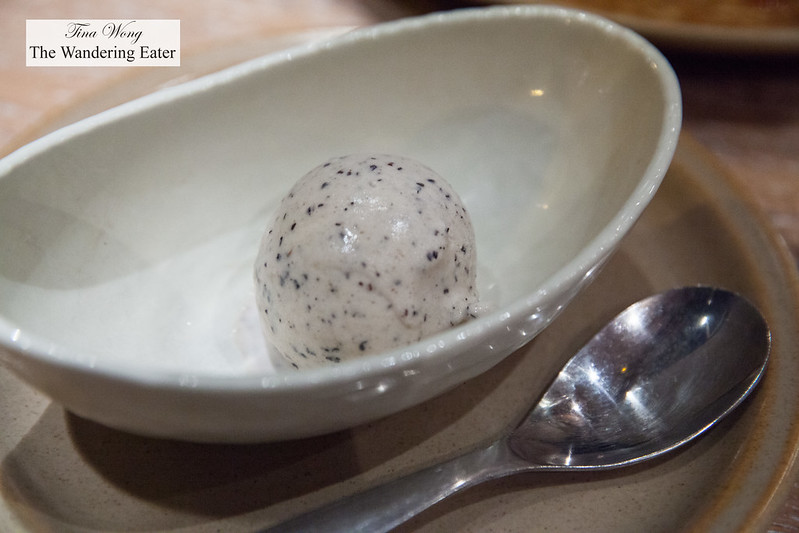 We split the sweet crêpe that was a seasonal special called the Dame Pêche (10.50€) and a scoop of buckwheat ice cream. The peach-topped crepe was delicious and the melting quenelles of vanilla ice cream and chantilly cream is a great idea of the classic peaches and cream dessert but have the crepe as your vehicle.

As for the scoop of buckwheat ice cream, it’s surprisingly tasty. I’ve never had a grain flavored ice cream – except for corn since the U.S. is the highest producer in the world and it’s a common summer ice cream flavor in NYC – and I love ice cream flavors that skew toward the unusal. That all being said, this scoop of ice cream is nicely creamy, and the deep, nutty, buckwheat flavor.

This restaurant is perfect for an unfussy night out. The food and hard ciders are is great (and they do serve wines too) and the service is friendly.