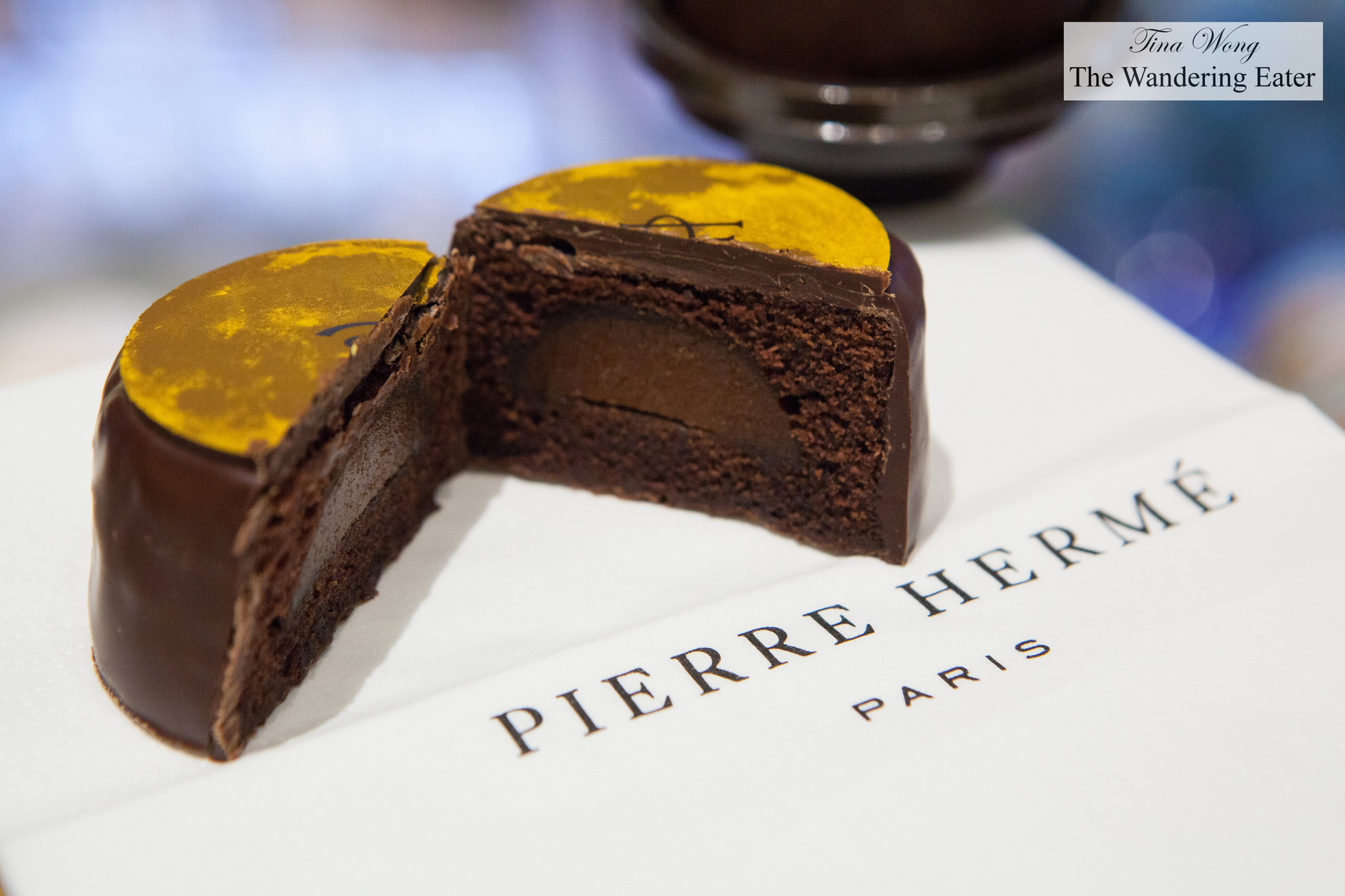 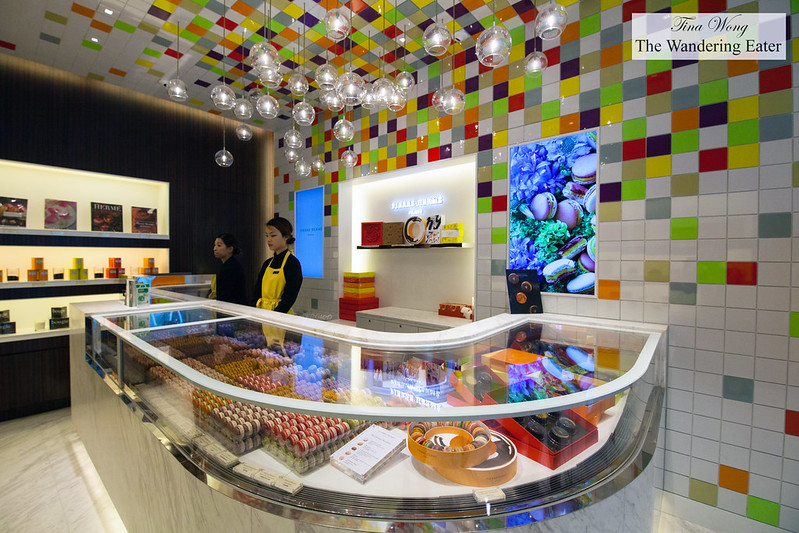 Pierre Hermé Hong Kong opened its doors in May 2013 and so much buzz generated on that side of the world that it made me a bit envious, frustrated and lamented that Chef Hermé still hasn’t opened a boutique in the U.S.

On the bright side, since Hong Kong was my first city on my long trip in Asia that I get to have my hands on the vibrant, jewel-toned macarons and chocolates. (Unfortunately, all of their HK locations do not sell the beautiful, delicious pastries like its Paris and Tokyo locations.)

Entering its first location in Hong Kong at IFC, this minimalist colorful shop is a feast for the eyes for the macaron lovers. The rainbow of colors from the beloved macarons are on full display at the sleek, glimmering refrigerated display cases in contrast to trays of dark chocolate bonbons. 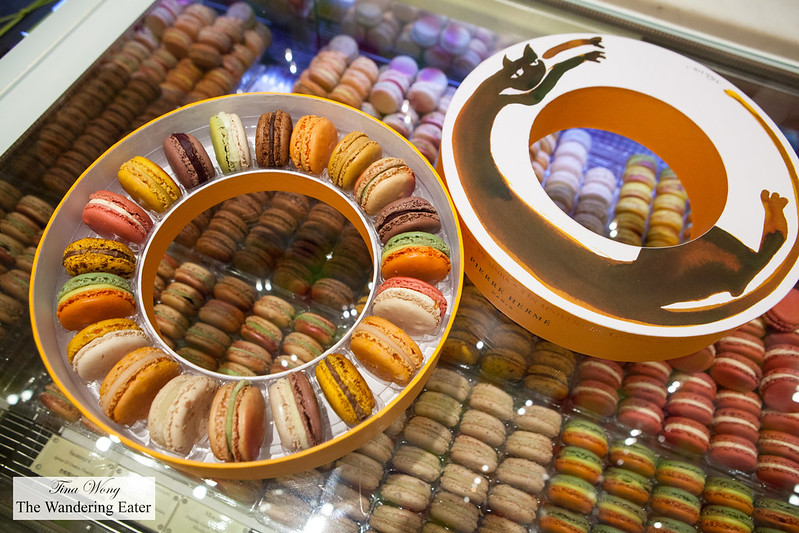 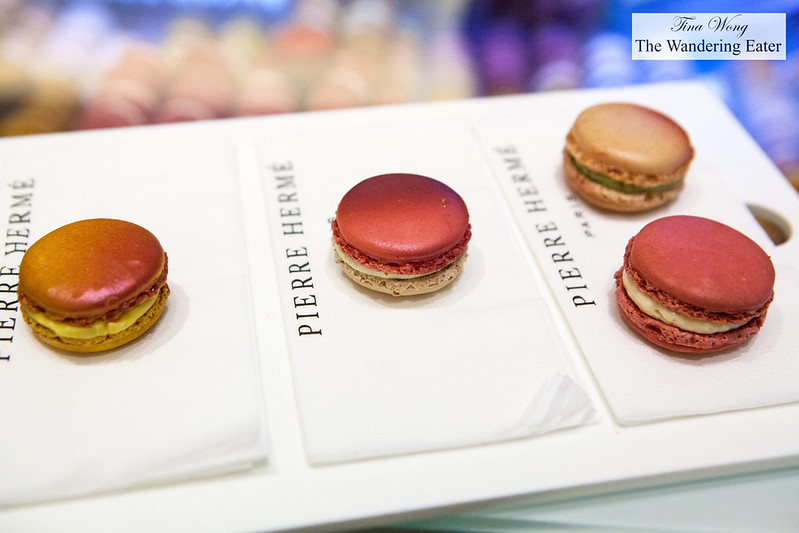 The primary reason to come to any Pierre Hermé boutique is to have the signature macarons and we got the Initiation Chat box to go along with some individual ones to eat at the moment like the signature Mogador (passion fruit and milk chocolate) and seasonal Les Jardins collection like the olive oil & Mandarin orange, Envie (vanilla, violet and cassis), Velouté Ispahan (yogurt, rose, litchi, and pistachio), Velouté Infiniment Citron Vert (yogurt and lime). As expected, the wonderfully chewy and thick macaron shells meet the deliciously unexpected flavors blew our minds and thrilled our palates. 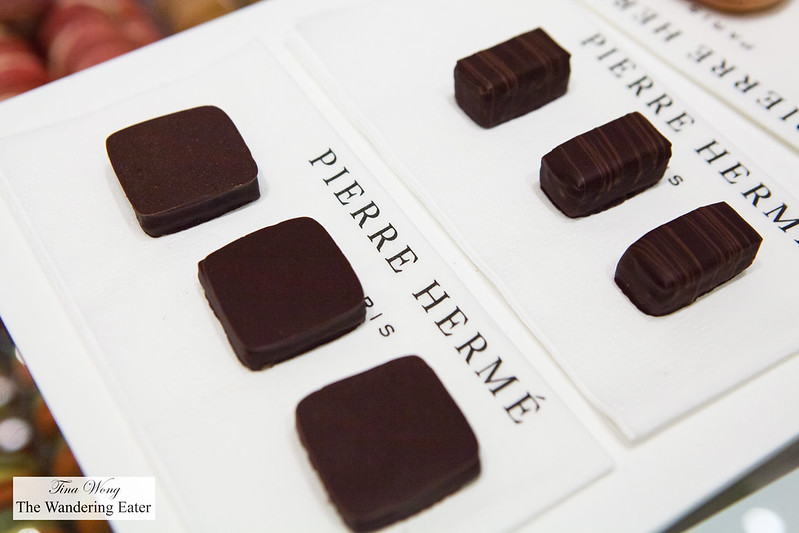 To those who aren’t too familiar with Pierre Hermé is his deft hand in chocolate besides macarons and pastries. The bonbons (chocolates) are divine and like any of his confections some are familiar and some like his macarons, have unusual flavor pairings that would simply amaze. 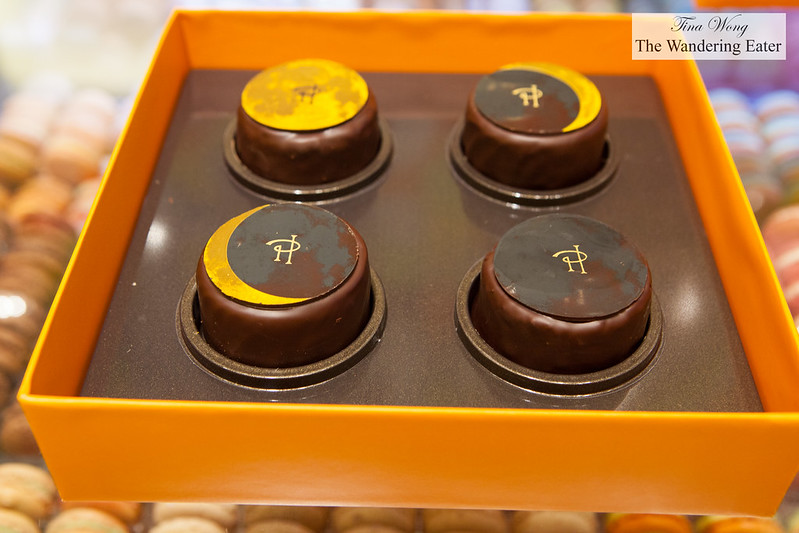 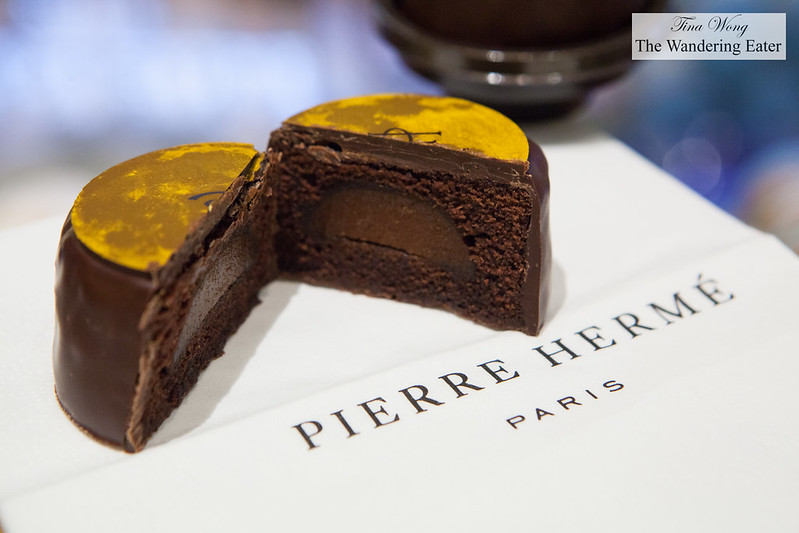 Continuing the thought of amazement and Hermé’s chocolates, he managed to make chocolate mooncakes for Mid-Autumn Festival for his Hong Kong boutiques only. Sure, this is not the first time I’ve heard and seen chocolate mooncakes. I’ve ate a few last year in Beijing, China, but it’s an entirely different thing. This isn’t just a mooncake-shaped chocolate filled with a ganache. Hermé had his Hong Kong counterparts to ship mooncakes (allegedly about 30) to his Paris headquarters to taste and analyze to come up with for his first mooncake collection. This collection has two flavors and sold only in boxes of 4 mooncakes for 340 HKD (almost $34 US) or 8 mooncakes for 740 HKD (almost $96).

What I truly loved about this chocolate mooncake collection is that Hermé honored the traditional mooncake, especially with the textures. The Pléntitude Mooncake represents the full moon and new moon. The prized salted egg yolk found in traditional mooncakes is replaced with a soft caramel center.

The caramel center mimics the texture and subtle salinity of the egg yolk and it floored me how realistic it felt on the palate. The moist, thick dark chocolate caramel cake mimicked the texture of the thick lotus seed paste. The thin coating of pure dark Mexican chocolate did add some crispness but it’s subtle. I was floored. 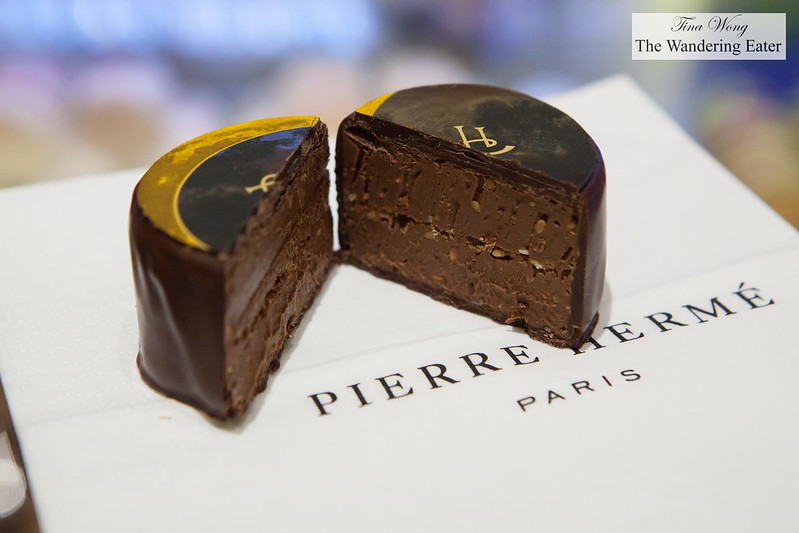 The other mooncake, Ouvre-Toi Mooncake was based on Pierré Herme’s bonbon, Ouvre-Toi, a combination of praline and sesame nougatine. It’s made with a blend of sesame, praline and pure Mexican origin dark chocolate, topped with a crescent shaped chcolate disk to represent the different moon phases. This was a sweeter mooncake compared to Pléntitude and for those who prefer this confection to be closer to a chocolate bonbon, this would be it. I still loved this mooncake very much for the crisp, crunchy textures and the nutty flavors of the praline and toasted sesame.

If you want to share a unique box of mooncakes and Pierre Hermé Hong Kong is nearby, I would highly suggest you to pick up a box. Frankly, I am thinking of asking my friends and relatives who reside in Hong Kong to ship me a box ASAP since Mid-Autumn Festival is this Sunday (September 27)!