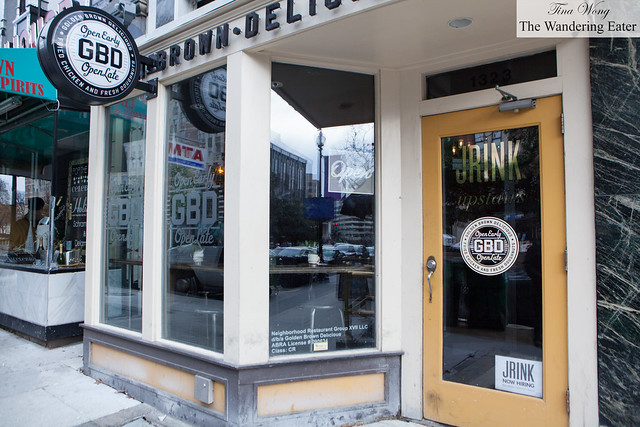 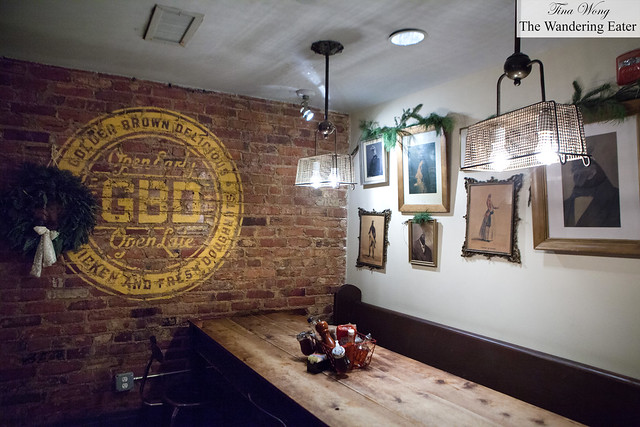 Since we stayed at Dupont Circle, one of our weekend mornings at Washington, D.C. we had brunch at GBD, acronym for Golden Brown Delicious. What “golden brown delicious” refers to fried chicken and doughnuts. (If you have not noticed, D.C. is having a major doughnut renaissance.) When you walk past the takeout doughnut counter, you walk into the dining area where you see exposed brick wall with the restaurant’s logo and a few banquettes and two toppers along the opposite wall.

The savory food beyond the doughnuts consist of fried chicken, warm fluffy biscuits, and a touch of vegetables. The brunch crowd when we were there consisted mostly of the young people.

We started out with a large mug of coffee ($3), a good, creamy glass of Moo-Hoochiato Milk Stout (4 ounce, $4.50), and a mason jar of fruity, Brunch Punch ($7) with their fresh made doughnuts.

GBD’s doughnuts are hearty, decadent yet flavorful. The bourbon maple glazed with bacon doughnut was delicious. The
Gala apple fritter with cinnamon glaze had great apple flavor and not too cinnamon-y. The eggnog doughnut was their holiday flavor and I was surprised not disliking it (usually, I don’t like eggnog.) as it’s more citrus forward than having the odd cooked egg and cream flavor. The chocolate devil’s food cake doughnut with coconut was truly over the top and was well liked on our table. 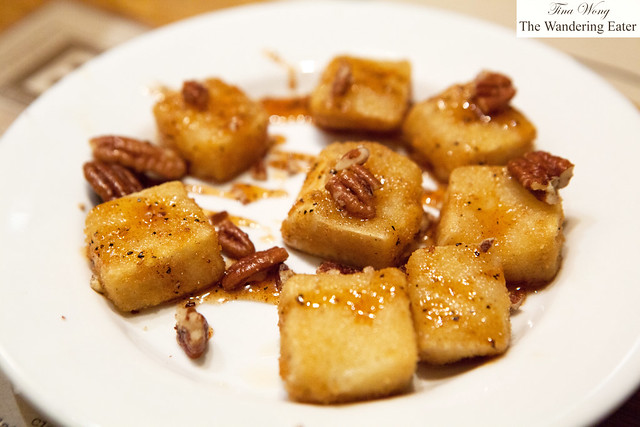 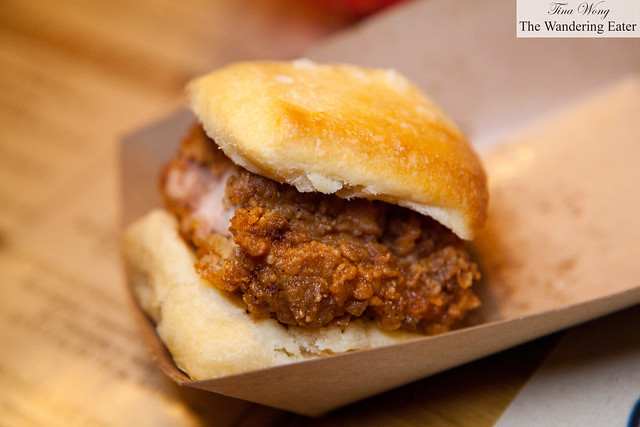 Moving on to savory fare, we had their plate of fried brie cheese topped with pecan and spiced honey sauce (off menu item). As over the top as it sounds, the brie actually held up well with a delicate, crisp exterior. The pecans and slightly spiced honey sauce really made this appetizer absolutely delicious. The Lil’ chicken biscuit ($3.25 each) is a moist yet crisp fried chicken tender on a fluffy, creme fraiche biscuit with spicy honey was amazing. 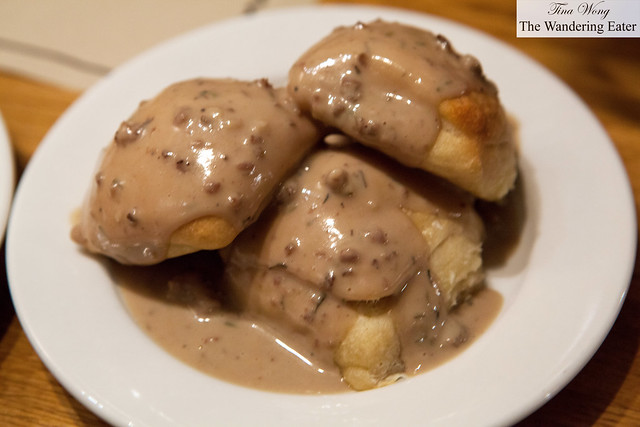 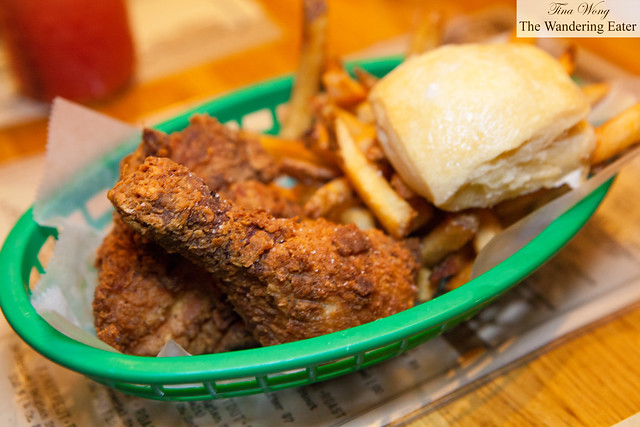 If you are feeling the Southern favorite of biscuits and sausage gravy ($4), this could be your side dish or appetizer. The basket of thigh and drumstick ($10) comes with a creme fraiche biscuit is a fail-safe and tasty basket of fried chicken. 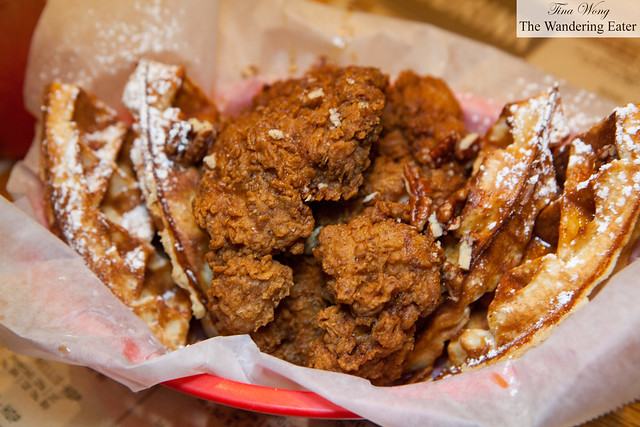 The chicken and waffles ($12) is a Belgian waffle topped with two large fried chicken thighs topped with maple-chicken jus, buttered pecans and dusted with powdered sugar is familiar yet has what seems to be the GBD signature of indulgence to have the buttered pecans. It’s best with their house made hot sauce or any of their spicy dipping sauces (Frankenbutter, Chipotle BBQ, and General Satan’s sauce (the latter is a doozy with the spicy factor)). 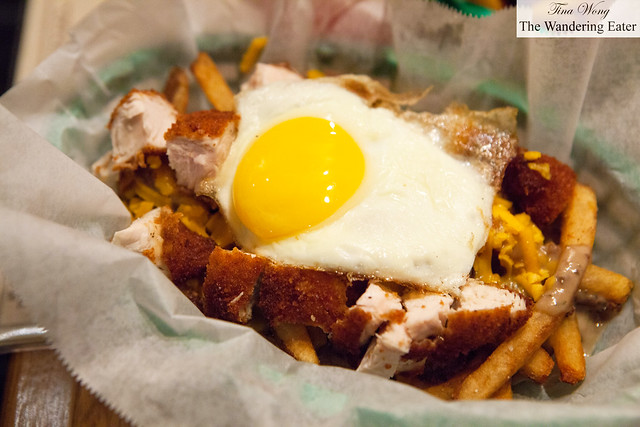 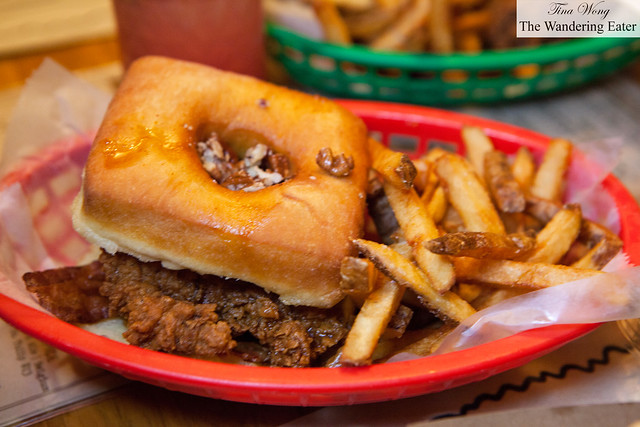 If you had a rough night before from drinking and need to have something greasy and heavy to recover, GBD has your back with The Luther ($12) and GBD Poutine ($10). The Luther is a tasty fried brioche doughnut glazed in maple-chicken jus with buttered pecans, slab bacon and fried boneless chicken thigh with a side of fries. The poutine is a basket of fries topped with their sausage gravy, chicken tenders and cheddar topped with a fried egg. Both are delicious and both dishes will fill up your stomach.

GBD is a very good place to have a casual, hearty brunch. Definitely get their doughnuts and fried chicken. Service was friendly and pretty knowledgeable of the food and drinks. It may get loud with the chatter as the peak of brunch rolls in but it’s all good (beats than the booming music that may not care to listen to in NYC).

To view more photos of this brunch, please CLICK HERE or view the gallery below: